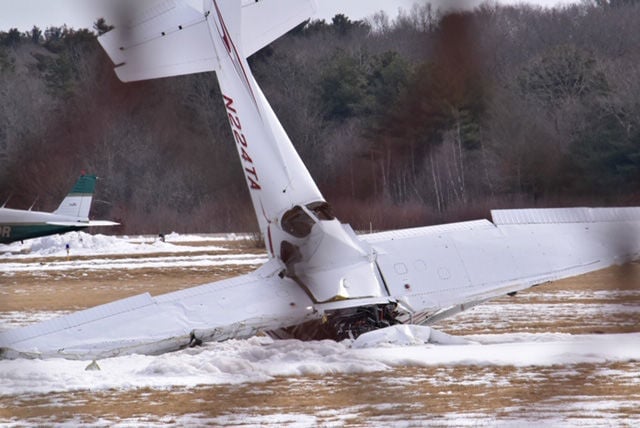 Two people were killed when a plane crashed at Mansfield Airport on Saturday. 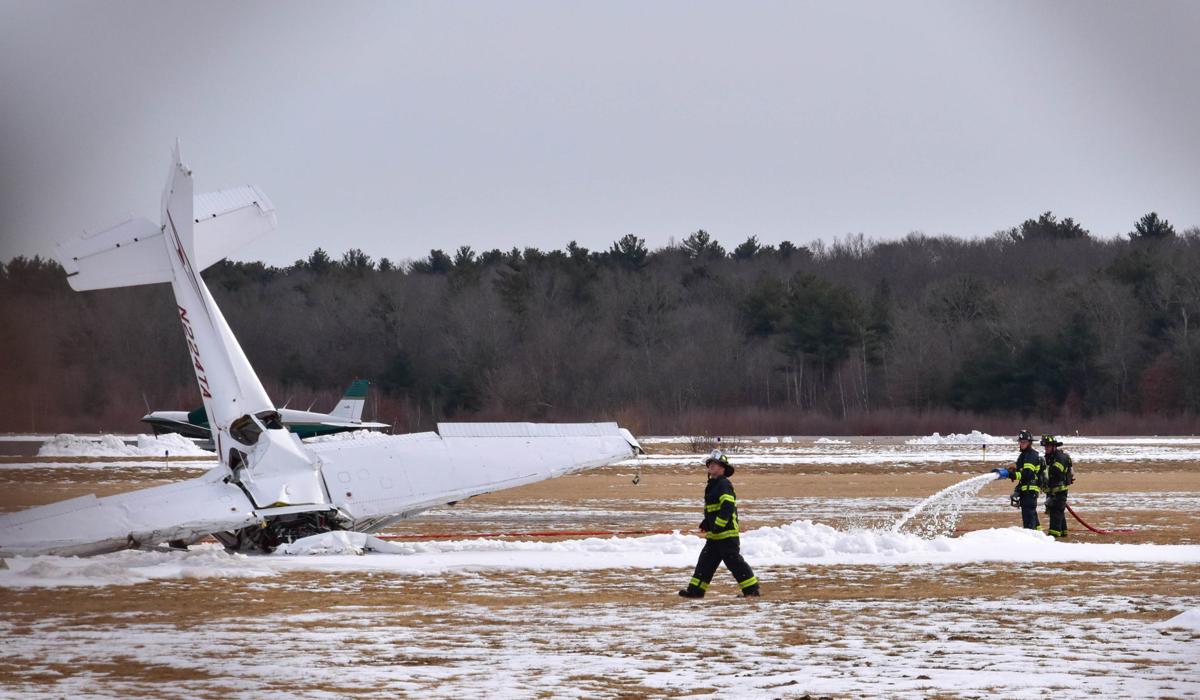 Firefighters apply foam around the plane and leaking fuel after it crashed at Mansfield Municipal Airport on Saturday. 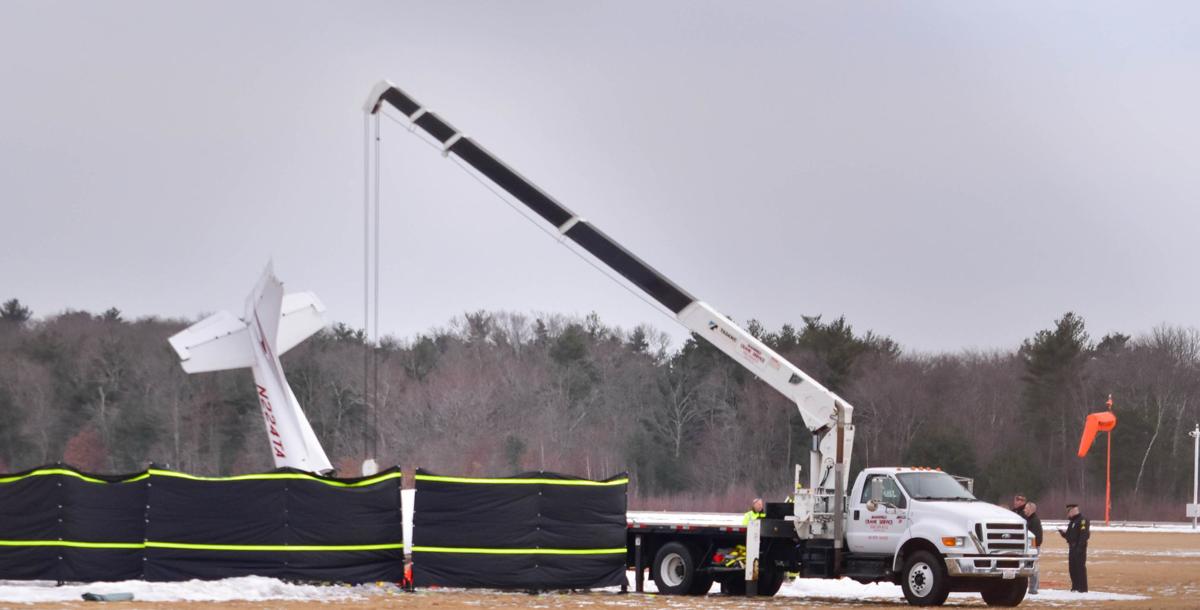 A crane is used to pull the plane out of the ground at Mansfield Municipal Airport.

Two people were killed when a plane crashed at Mansfield Airport on Saturday.

Firefighters apply foam around the plane and leaking fuel after it crashed at Mansfield Municipal Airport on Saturday.

A crane is used to pull the plane out of the ground at Mansfield Municipal Airport.

MANSFIELD — Pilots and others waiting to be seated for breakfast Sunday at the Mansfield Municipal Airport restaurant expressed sadness over a plane crash that killed an instructor and his student at the airport the day before.

The crash, which was reported around 12:30 p.m. Saturday, killed 31-year-old Sydney Miti of Waltham who was the instructor pilot, and his student, 18-year-old Julian Lattermann of Dover, according to Mansfield Police.

One experienced pilot, David Middleton of Attleboro, who was waiting for a seat at the restaurant Sunday morning, said he was working on his plane, preparing it for an afternoon flight, when he saw the distressed Cessna 172 fly overhead the hanger where he was working on Saturday.

“I saw the plane fly by at a 45 degree angle at about 200 feet,” Middleton estimated.

He said that the angle and the altitude were his best guess.

Middleton had noticed the plane as it practiced take-offs and landings.

He said the engine sounded fine, and then as it flew over the hangar, referred to as the “shanty town” due to the rust color of the hangar, the plane struck the ground, nose first.

Middleton said he was one of the first on the scene, running towards the wreckage, but then had to stay back when he saw how much fuel was spilling from the plane and the extent of the damage.

He said he immediately had those with him call for an ambulance and firefighters.

Middleton said he has been flying for 30 years, and earlier in the day, he and another pilot flew to Nashua, N.H. for breakfast. He said it was a perfect day for flying and until the crash he planned to take his plane out for a flight. The Mansfield Municipal Airport was closed immediately after the crash.

He and other pilots all said the crash was very unfortunate.

Police said the plane, a Cessna 172S, was owned and operated by Horizon Aviation of Norwood.

Police, in a press release issued late Saturday, said the plane left Norwood airport around 11:26 a.m. There was a radio transmission at around 12:30 p.m. from the plane that it missed an approach as it maneuvered away from runway 32. The plane then flew past the airport administration building and crashed into a turf landing area.

Mansfield Fire Chief Neal Boldrighini said the first responding fire crews and a Boston Med Flight, which is stationed at the airport, quickly determined the two occupants of the plane had perished in the crash.

The chief said firefighters poured foam over the wreckage as a precaution because vapors from aviation gas is volatile. He said the plane never caught fire.

A crane was called to the site and was used to pull the plane out of the ground and then assisted fire crews to remove the aircraft’s engine and propeller before the victims could be removed.

Federal Aviation Administration and National Transportation Safety Board officials are investigating the crash along with Massachusetts State Police and the Bristol County District Attorney’s office.

A state police helicopter and drone took pictures of the crash site.

Paul Bjoukman, a resident of Mansfield and a pilot for the last 14 years, went to the airport with family members to view the crash scene on Saturday.

He quickly identified the aircraft as a Cessna and said that it seats four people.

Bjoukman talked about taking his initial flight training in Mansfield, and then speculated how the plane ended up where it did, because he didn’t think it was near either the paved or the grass runway.

Local police said Saturday the crashed plane would remain at the airport overnight and that federal authorities will take over the crash site.

The National Transportation Safety Board will determine a probable cause for the accident, according to the FAA.

The last aviation fatality in the Attleboro area took place in June 2015 in Plainville when a single-engine Beechcraft crashed into a home on Bridle Path and burst into flames, killing a Tennessee couple and their daughter in the plane. Residents of the home escaped unharmed. That plane was headed to the Norwood airport.

There have been a few accidents the past several years at the Mansfield airport, including in February 2014 when a student pilot escaped injury when a Cessna 172 made what was described as a hard landing at the airport. The plane’s wheel hit a snowbank and went into a skid off the runway, causing an estimated $45,000 damage. The pilot had been practicing landings.

In October 2013, a plane crashed into a group of trees about 25 feet off the ground, but the pilot and a student pilot managed to get out of the wreckage on their own. The two were reportedly practicing take-offs and landings.

And in December 2011, a North Attleboro man escaped with minor injuries after a plane he built himself veered off the runway and flipped over.

Also, in April 2008, another student pilot’s plane cruised off the runway and flipped over, but no injuries were reported.

The worst accident at Mansfield Airport took place in September 2007 when two people from Maine were killed and two others injured, including a Mansfield resident, when a plane crashed after takeoff. Federal investigators attributed the crash to pilot error and an overweight plane.

Cay lan mat help tighten roller surface pores, long-term use to help your skin smooth and shining upward without pimples. cay lan mat rolling stone faces can be made from many different materials, commonly include: quartz blue, pink quartz, đá thạch anh trắng, marble, ... Da quy An An is a unit supply, wholesale plant roll goods in Vietnam. Customers to the store we can be assured of quality.

Cay lan mat help tighten roller surface pores, long-term use to help your skin smooth and shining upward without pimples. cay lan mat rolling stone faces can be made from many different materials, commonly include: quartz blue, pink quartz, đá thạch anh trắng, marble, ... Da quy An An is a unit supply, wholesale plant roll goods in Vietnam. Customers to the store we can be assured of quality.

You want to book ve may bay gia re online? Want to own ve may bay most quickly? Etrip4u is ecommerce floor offers airline tickets, tours, hotel rooms and booking service, car rental car Quality Online, Cheap. Flexible payment. Etrip4u with over 15 years experience in the field of tourism, airfare committed to experience the most wonderful tour for you.

How to own most simple airfares, online ordering and rapid procedure? Ticket booking system online Etrip4u constantly updated prices, online in real time will help you save a lot of time and effort. Etrip4u confident will bring satisfaction and contribute a small part to the success of our customers.