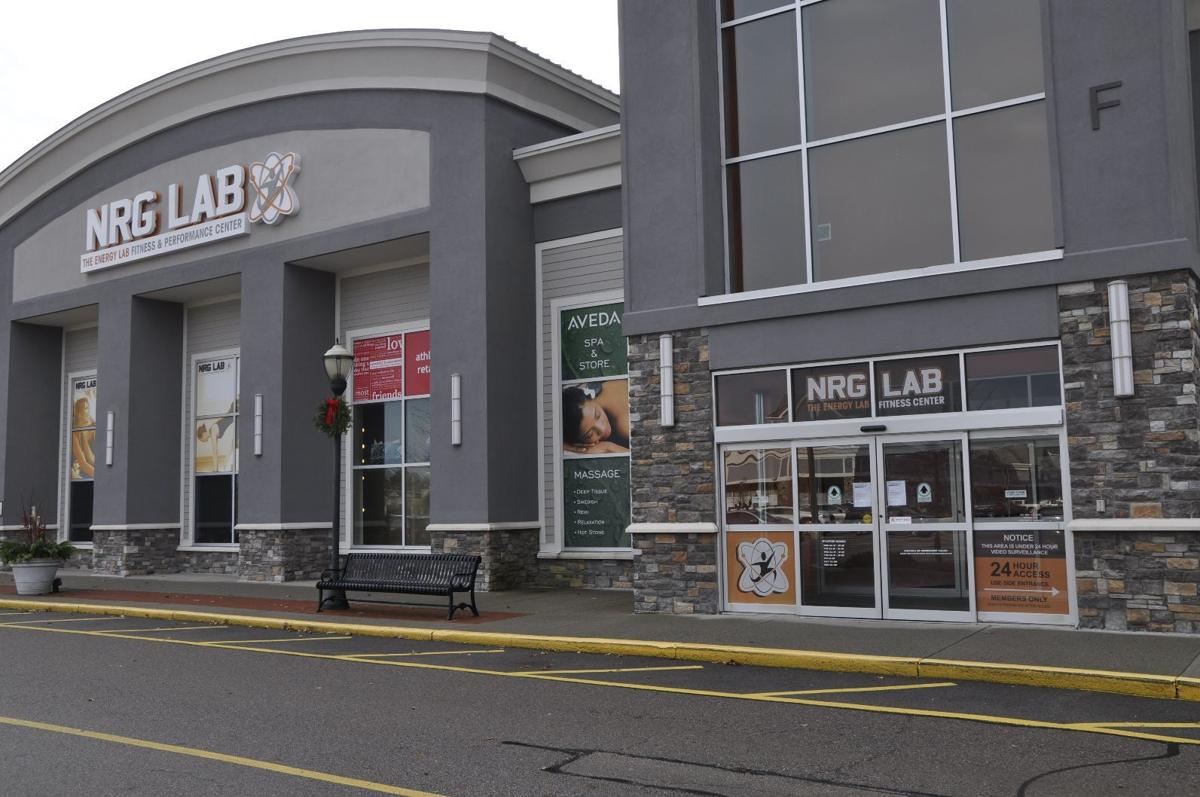 The NRG Lab fitness center at Mansfield Crossing was closed on Thursday. 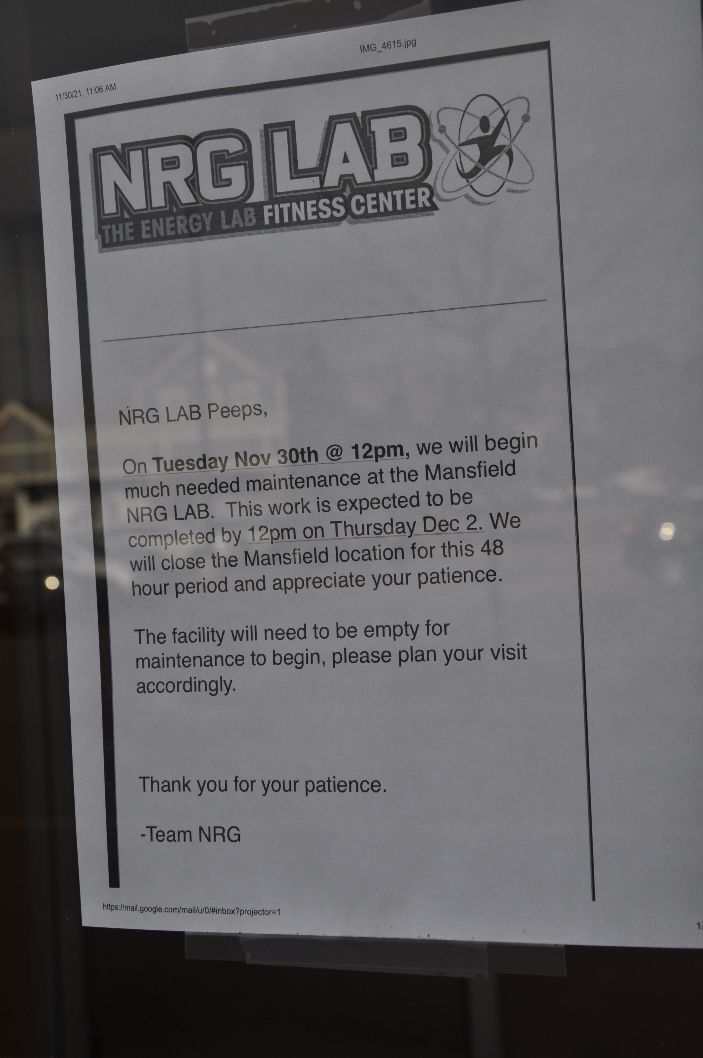 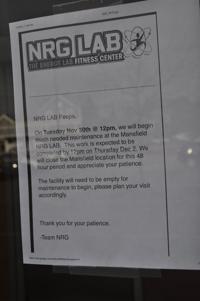 A sign on the door of NRG Energy Lab in Mansfield said the fitness center would be closed for maintenance work on Tuesday but would reopen at noon Thursday.

The NRG Lab fitness center at Mansfield Crossing was closed on Thursday.

A sign on the door of NRG Energy Lab in Mansfield said the fitness center would be closed for maintenance work on Tuesday but would reopen at noon Thursday.

MANSFIELD — Patrons of a local fitness center are going to have to go a little farther for their workouts.

NRG Energy Lab’s location at Mansfield Crossing informed members via email that the gym was closing permanently as of Wednesday.

The notice caught some members by surprise. “I will miss the place,” Jack Coyle of Attleboro told The Sun Chronicle. “Hopefully someone will go in there and make a go of it.”

Titus Jackson, 57, of Mansfield had not gotten a notice the gym was closing before he drove up to the School Street site Thursday afternoon, expecting it to be open. “I don’t know what’s going on,” he said.

Jackson, a Los Angeles native, said he’d been a member at NRG for about a year. “They didn’t tell me anything,” he said, adding that he was going to look for another gym.

Coyle, 63, agreed. Although he’s a member at another gym, “I’m going to need a second home. I don’t know what I’m going to do.”

For Luther White, president of NRG, the decision to close the club was “heart wrenching.” White, who is also the founder of the company, explained that the club had been losing membership and many patrons said they were simply afraid to come back to the gym in the wake of the COVID-19 pandemic. “The economics did not work,” White said.

The other two club locations, in Franklin and Milford, remain open. But White said the memberships of patrons of the Mansfield location have been canceled along with their fees.

NRG had earlier announced the 8-year-old School Street location — in the former Borders Bookstore next to L.L.Bean — would be closed for “much needed maintenance work” on Tuesday but would reopen at noon Thursday.

A copy of that notice was still on the doors of the site Thursday afternoon although the doors were locked and there appeared to be no one inside.

White said that once the company learned the cost of the required repairs to its steam room, laundry facilities and HVAC system, “we realized we didn’t have the resources to fix them” and made the decision to close the site.

Coyle, a project manager with Schneider Electric in Foxboro, said he had been a member of the local studio since June. He said he had talked to the site’s manager as recently as Monday and had no hint the gym would be closing. But he says he noticed the gym was rarely busy when he worked out in the afternoons and there were continuing problems with some of the facilities, including the steam room.

He said he received an email notice Wednesday from NRG that blamed the shutdown on “the impact of COVID-19,” rising costs and “membership attrition”. The email also cited “mandatory shutdowns,” although the state’s orders closing fitness centers were lifted in August.

According to White, the Mansfield location had 2,200 members pre-pandemic. By this week, that had fallen to 450. He said the company had tried different strategies to keep its membership — staying open 24 hours, reducing prices — but the Mansfield location “was hit particularly hard. Folks were afraid to come to the gym.”

White confirmed that members’ lockers had been cleaned out at the Mansfield location but their belongings could be retrieved at the company’s site in Franklin. He said patrons with questions should send an email to mansfield@energylab.com.

“We wish it wasn’t this way,” White said. “Our members (are) some of the best. We are proud to have served them over the years.”