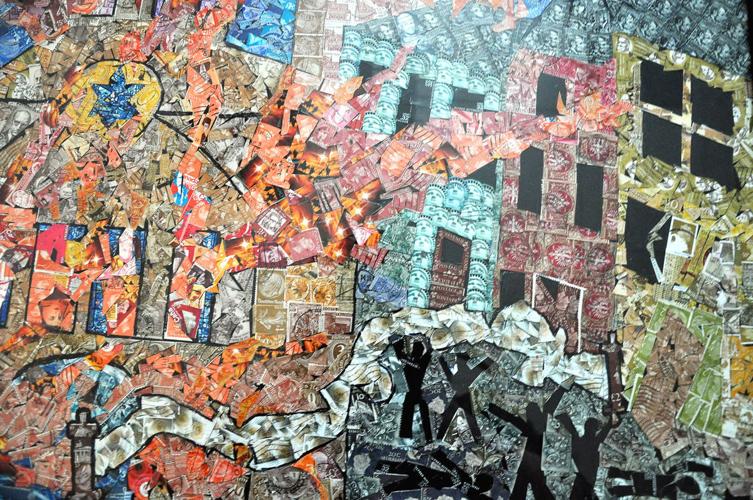 This "Kristallnacht" collage portrarys “Kristallnacht  — the Night of Broken Glass,” a piece completed by Nate O’Connor over the course of a year to highlight the horrors of Nov. 9-10, 1938. (Photo by Andrew Steel) 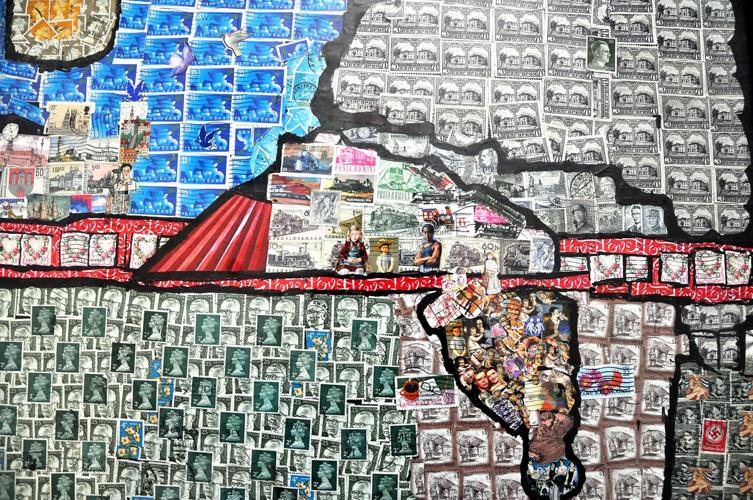 This collage is entitled "The Kindertransport," and is dedicated to children of the Holocaust. (Photo by Andrew Steel) 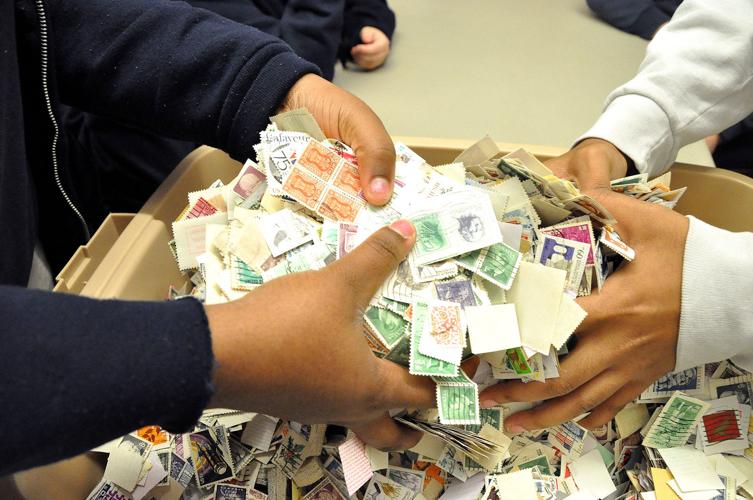 Students show one of many bins containing thousands of stamps that were donated to the project yet to be counted. (Photo by Andrew Steel) 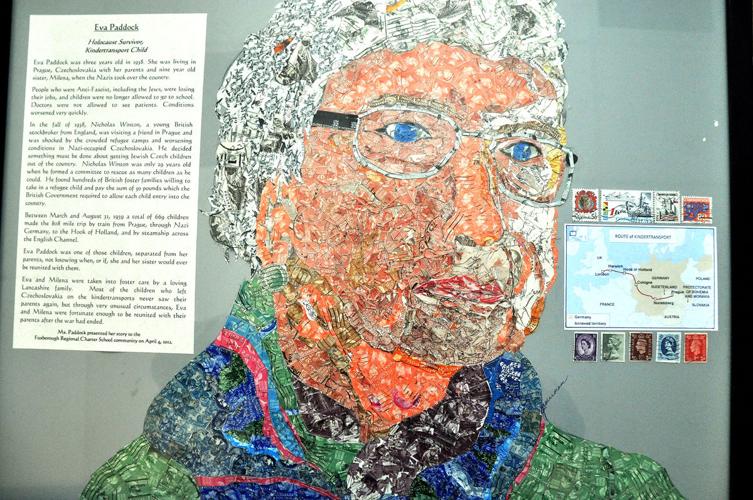 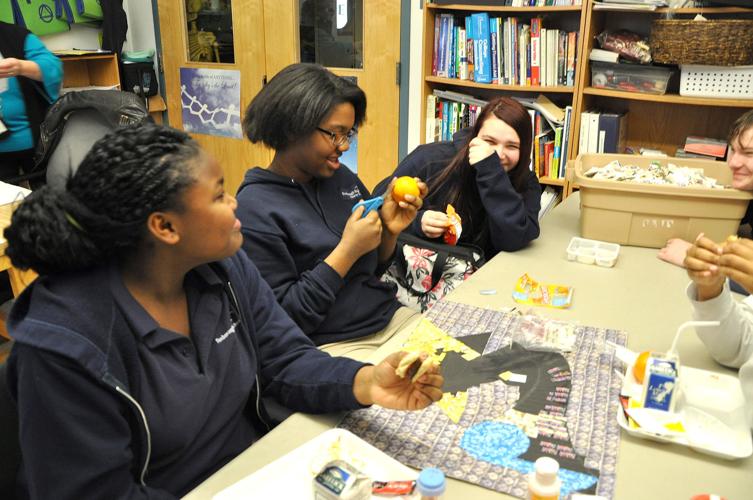 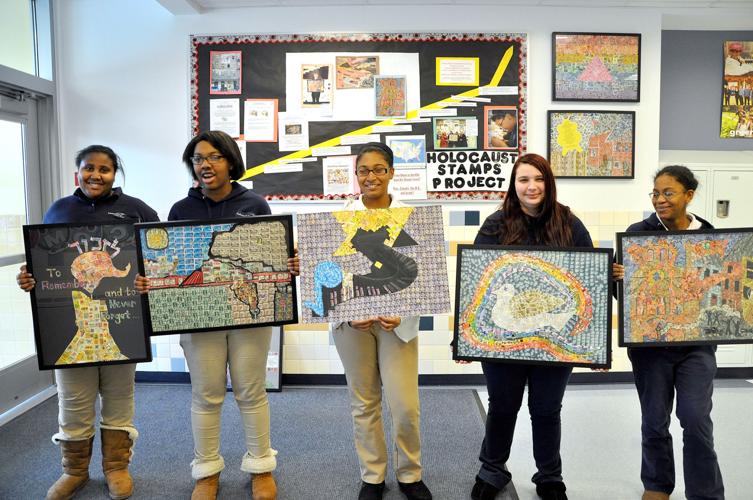 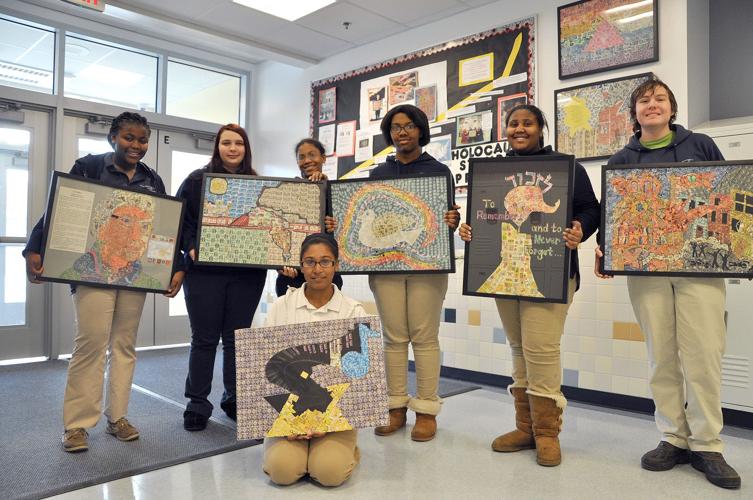 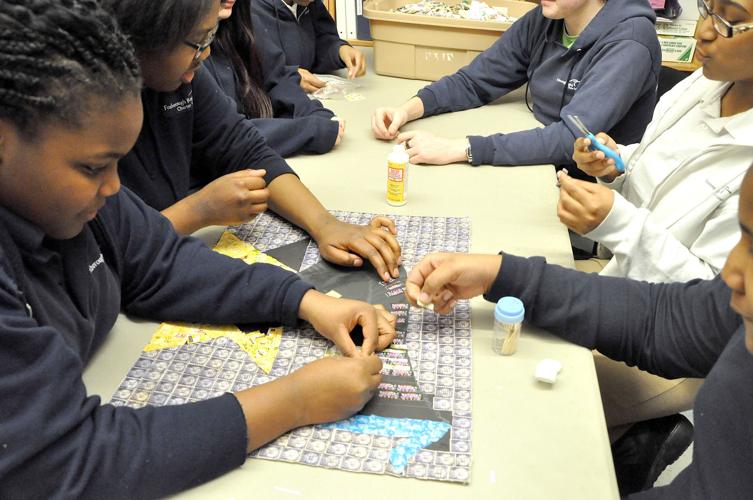 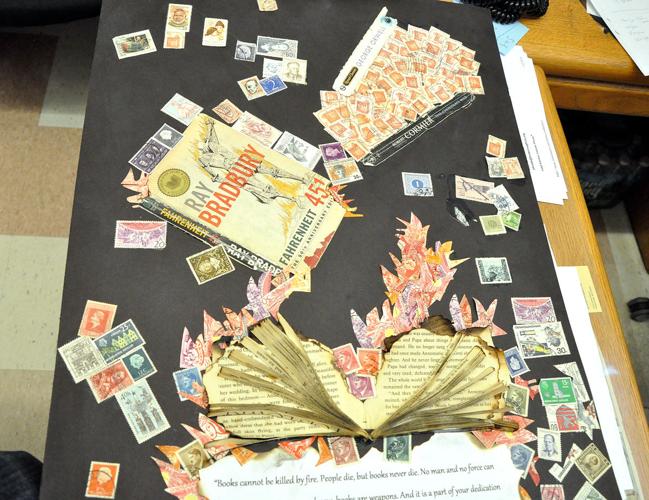 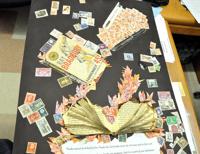 Collage entitled 'Books can not be Killed by Fire.' (Photo by Andrew Steel)

This "Kristallnacht" collage portrarys “Kristallnacht  — the Night of Broken Glass,” a piece completed by Nate O’Connor over the course of a year to highlight the horrors of Nov. 9-10, 1938. (Photo by Andrew Steel)

This collage is entitled "The Kindertransport," and is dedicated to children of the Holocaust. (Photo by Andrew Steel)

Students show one of many bins containing thousands of stamps that were donated to the project yet to be counted. (Photo by Andrew Steel)

Collage entitled 'Books can not be Killed by Fire.' (Photo by Andrew Steel)

FOXBORO — Jamie Droste, the student life adviser at the Foxboro Regional Charter School, dropped a big old bin on the table in front of me. It was filled to the brim with stamps.

“If you reach your hand in, you can come up with something from 1932, right up through 2014, and everything in between. We even have some from the 1800s. And, we have several more bins just like this one.”

The girls seated around me nodded in agreement, grinning as I gawked.

“Where do they all come from?” I asked. She put her hand on her chin.

“We get them from all over the U.S., Canada, Great Britain, Israel,” she said with a smile. “We print a lot of fliers.”

(That total has since risen to 4,890,232, according to Droste’s predecessor and the person who began the project, retired Foxboro Regional Charter School teacher Charlotte Sheer.)

“We have people who donate lifetime stamp collections. A person (who collected stamps) passes, and nobody knows what to do with it.”

This is the work of the Foxboro Regional Charter School Holocaust Stamp Project. And though it may initially come across as tedious, perhaps even insane, to sort 5 million stamps, that is exactly the point: in spite of whatever madness surrounds the project, every stamp counts.

“People today, they get bullied just because of their ethnicity,” said Katelyn Caradonna, one of the high school students. She, as well as fellow students Nancia Poteau, Temitope Faleye, Letaya Liles-Moses, and Deedee Haith, sat down to talk about the project.

Along with classmates Marissa Durden and Nate O’Connor, these girls have not only spent a whole lot of time sorting stamps; they have also sketched, clipped, and pasted together several collages of Holocaust history with stamps from their collection.

Before I’d sat down, Droste had walked me through a number of works from the Holocaust Stamps Project:

* “Books can not be Killed by Fire,” an as-of-yet unfinished piece remembering the German Student Union’s burning of subversive literature in Nazi Germany.

* “Evolution of the Pink Triangle,” headed by the School’s GSA to acknowledge the accused homosexuals and gay sympathizers killed in the Holocaust.

* “Kristallnacht" — the Night of Broken Glass,” a piece completed by Nate O’Connor over the course of a year to highlight the horrors of Nov. 9-10, 1938.

One work-in-progress is tentatively entitled the “Alice Sommer Collage.”

“Alice Herz Sommer was 110 years old, the oldest Holocaust survivor (in 2014),” Droste said. “The girls saw a youtube presentation on Alice, and they fell in love with her.”

“She was a concert pianist, and she just had an amazing, positive attitude,” Letaya said.

The girls put together a collage in her honor. I asked about the purple Statue of Liberty stamps serving as the piece’s backdrop. Deedee spoke up: “We chose the purple because it’s a happy color, and we chose the statue for freedom.”

Featured at the center of the piece is a partially-completed piano. I watched as they filled in the black keys with stamps reading “celebrate.”

“They’re colorful and bright, like she was,” said Letaya.

Another collage, “The Kindertransport,” was completed last year in remembrance of the children who fled Germany and other Nazi occupied territories via train. The girls explained to me that the stamps on the left half of the image, where the train was rolling to, were mostly British stamps.

I noted the blue sky, comprised of dove stamps. “In every collage, there’s a dove,” Deedee said.

The train tracks are styled from red and white cutouts of the word “Love.” I asked about them.

”We picked the train tracks because it’s like the parents are bringing the children to England with their love,” Katelyn said.

Also featured is a stamp of Adolf Hitler, stern and proud among the black smoke to the right. “Who prints an Adolf Hitler stamp?” I asked facetiously. “Nazis do,” Droste said.

What inspired the students to tackle this now several-years-old project?

“At first it was for college,” Letaya stated. “And then ... then when you learn more about it ... it pushes you. You want to learn even more.”

“These people were innocent,” added Nancia. “They didn’t deserve any of this.”

The Holocaust started shortly after Hitler seized power in 1933 in Germany. When the Germans’ genocidal intentions were made public; when the stories and images of its wrath became known; the world was shaken. It was unfathomable.

Now, as we still search for answers of humanity in the ashes, these students are doing their part to keep the Holocaust’s horrors from being forgotten.

International Holocaust Remembrance Day is Tuesday. If you would like to help commemorate the Holocaust, the Holocaust Stamps Project is looking for volunteers to help sort the hundreds of thousands of stamps still in need of counting.

To volunteer, or to donate stamps to help the group reach its goal of 11 million stamps (one for every estimated Holocaust victim), please contact Jamie Droste: jdroste@foxboroughrcs.org.

To find out more about this project, go to http://www.foxboroughrcs.org/students-families/frcs-holocaust-stamp-project/special-events/

Even during the darkest hours of The Holocaust, there were angels who worked to shelter and save some of the Jews who were torn from their fam…