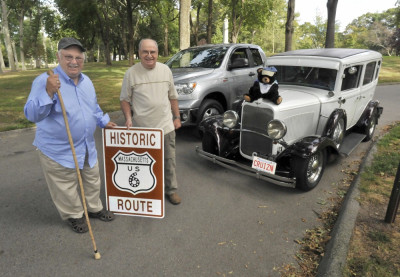 Don Doucette, left, the unofficial roving ambassador for the U.S. Route 6 Tourist Association, and John Buchanan, both of Attleboro. Buchanan traveled Route 20 west and returned on Route 6. He had planned on driving a 1931 Dodge, pictured with trip mascot "Welfleet" the bear, but the car developed a transmission leak at the last minute. 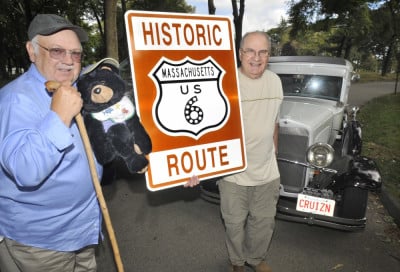 Don Doucette, left, the unofficial roving ambassador for the U.S. Route 6 Tourist Association, and John Buchanan, both of Attleboro. Buchanan traveled Route 20 west and returned on Route 6. He had planned on driving a 1931 Dodge, pictured with trip mascot "Welfleet" the bear, but the car developed a transmission leak at the last minute.

In 1946, jazz singer Bobby Troup advised listeners to "get your kicks on Route 66."

These days, however, travel and auto buffs John Buchanan and Don Doucette - both Attleboro residents - are singing the praises of a longer highway with a shorter name that takes drivers past tumbling ocean waves, through small towns and past hundreds of motor courts, drive-ins and rustic tourist attractions.

Route 6, which most Bay State residents associate with Cape Cod, is also one of only four transcontinental highways in the U.S., stretching about 3,200 miles through 14 states.

"We have a saying," said Doucette, 70, unofficial roving ambassador for the U.S. Route 6 Tourist Association. "Half the digits, twice the fun."

Buchanan recently completed a month-long odyssey in his 2013 Toyota pickup traveling U.S. Route 20 from Boston to Oregon and returning on Route 6. He took along a stuffed bear nicknamed "Wellfleet" - after the bear that wandered from Attleboro to the Cape a few years ago - as a mascot.

He originally planned to use his vintage 1931 Dodge, which developed a transmission leak at the last minute.

"We had a wonderful trip," said Buchanan, 73, who returned wide-eyed at the sights and spectacles of America he witnessed from Yellowstone Park to Mount Rushmore to the heartland's seemingly endless expanse of farms and agricultural enterprises.

This past weekend, the men joined with several car clubs to celebrate Route 6 during an auto cruise along the Massachusetts section through Seekonk and Rehoboth to Provincetown.

Buchanan, who said he was also motivated to take the trip as a spiritual journey on behalf of his late wife Judith and son Mark, emerged refreshed and inspired by his Charles Kuralt-like journey.

"The experience you get on the two-lane roads of America is a lot different than the interstates," he said.

Long before the federal interstate highway system, Route 6 began winding its way across the country during the 1920s.

Although built by individual states, it was officially designated a transcontinental route in 1937, according to the U.S. Department of Transportation.

However, an 80-mile section of the highway through Utah remained little more than an unpaved wagon trail. The final stretch wasn't paved until 1952.

The building of Route 6 was part of an explosion of highway construction that began during the 1920s, partly as a result of a 1919 military transcontinental convoy that highlighted the inadequacies of American long-distance roads.

Roads like U.S. Routes 6 and 20, as they slowly stretched across the country, made travel a lot more civilized. They also opened vast stretches of the country to practical auto travel and hundreds of majestic sights to tourists.

Beginning in 1934, surviving Civil War veterans began to promote naming Route 6 as the Grand Army of the Republic Highway in honor of those who fought for the Union.

Massachusetts was the first state to honor the designation, beginning in 1937, and other states followed suit.

A formal dedication of the Grand Army of the Republic Highway took place on May 3, 1953, in Long Beach, Calif.

Only a shift in the route on the California end in the 1960s truncated Route 6, severing its connection with the Pacific Ocean, Doucette said.

Although the arrival of the modern interstates relegated many of the nation's two-lane highways to second-tier status, Doucette said Route 6 has remained an important route serving small towns and big cities and preserving much of the charm that was motoring in mid-century America.

While many of the motels, service stations and attractions along the storied Route 66 are now abandoned, the U.S. Route 6 Tourist Association has local associations in several states promoting travel and tourism along the Massachusetts-to-California route.