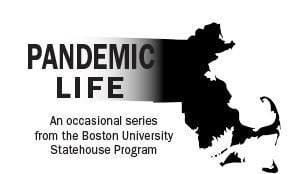 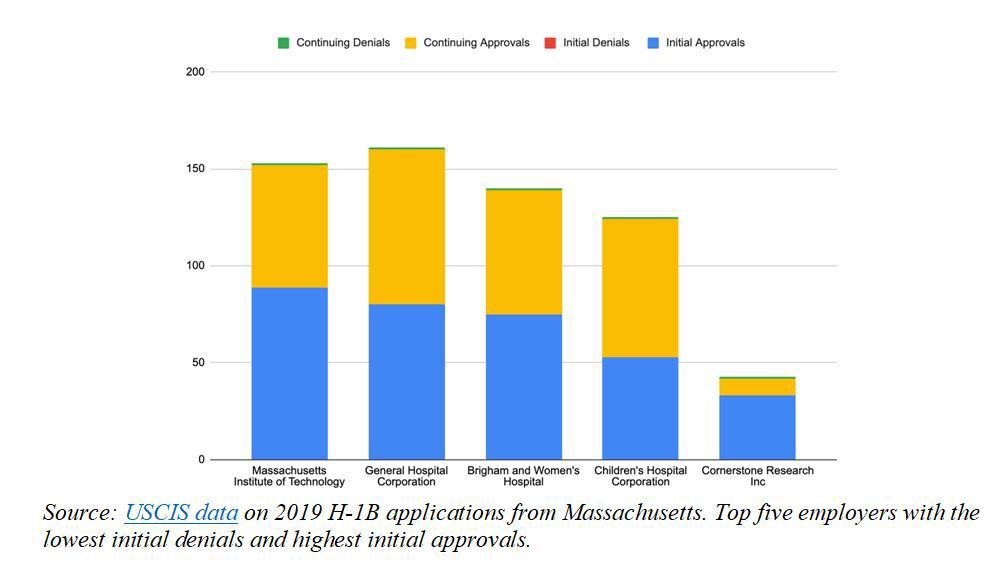 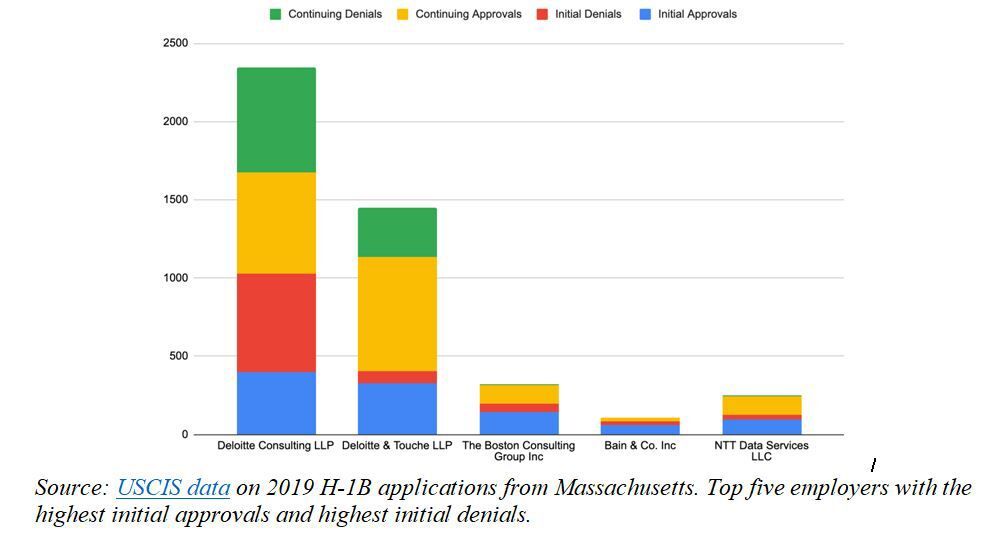 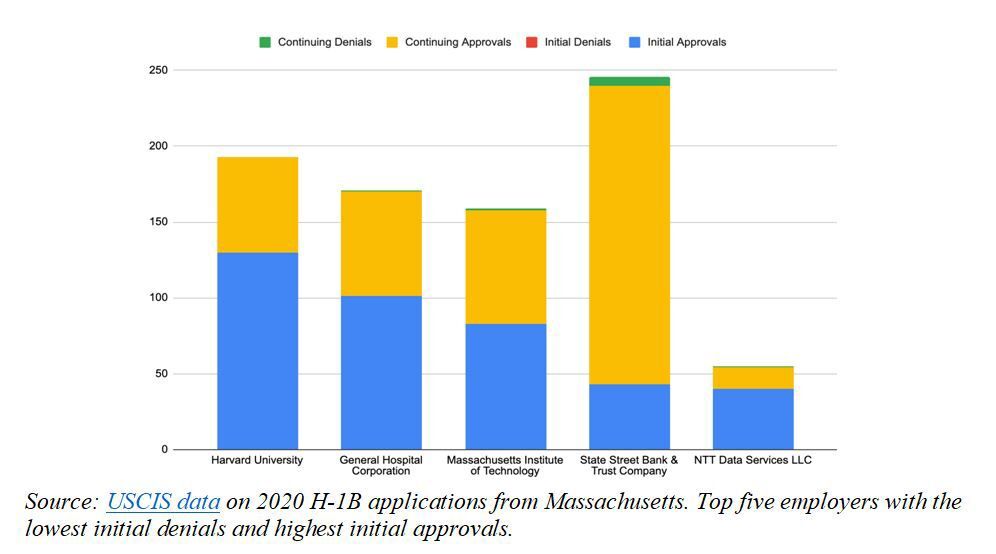 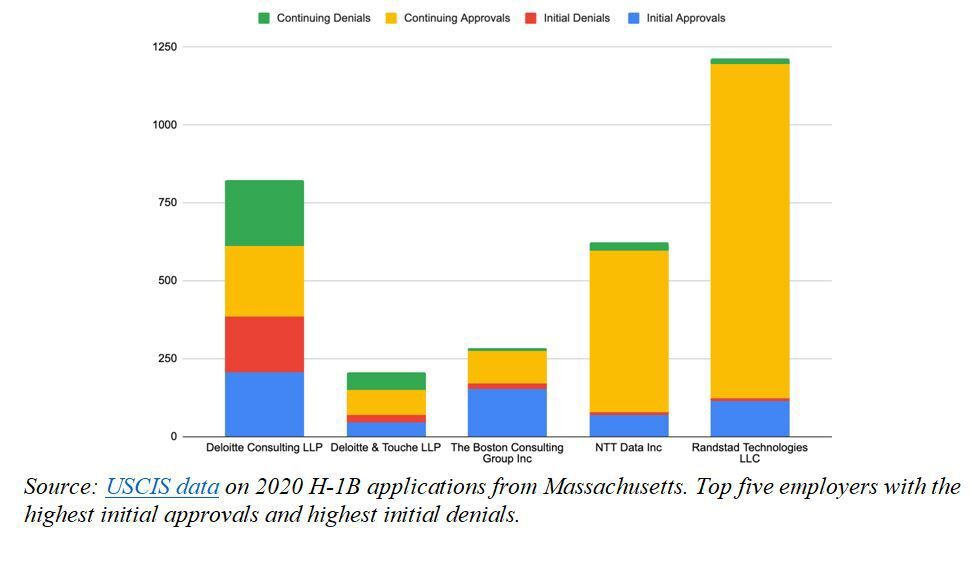 BOSTON — For many foreigners hoping to pursue “The American Dream,” the H-1B visa application is an inevitable process. The temporary visa allows foreign professionals with specialties to work in the U.S., but it takes both skill and luck to obtain one.

Data from United States Citizenship and Immigration Services reveals that while the number of petitions processed decreased in Massachusetts in 2020, what remains the same is the higher percentage of professionals in the health and research fields to receive H-1Bs.

At the root of these trends are two influences: the coronavirus and immigration policies from former President Donald Trump’s administration.

The H-1B is a nonimmigrant visa, which means that the individual is in the U.S. temporarily and has permanent residence outside of the country. It’s employment-based, so employers must first offer a job, and then petition on behalf of the individual.

The selection process is structured as a lottery system; the USCIS has a limited number of H-1B visas to allocate annually. The agency selects 85,000 petitions at random to move onto processing, from which 65,000 final visas are offered to bachelor’s degree holders and 20,000 are offered to master’s degree holders from accredited U.S. institutions.

This makes obtaining a H-1B challenging, even without a global pandemic and restrictive immigration policies. Scott Fitzgerald, Boston Managing Partner of immigration law firm Fragomen, said that individuals have a 30% to 40% chance of selection in any given year.

USCIS data indicate that most health care petitions in Massachusetts, both initial and continuing, were approved in 2019. The top four employers with the highest approvals and lowest denials in 2019 were all in the STEM field and primarily health care employers, with three hospitals at the top of the list.

On the other hand, the top five employers with the highest denials were primarily in the consulting and accounting fields, with large firms like Deloitte, the Boston Consulting Group, and Bain & Co. in the mix.

These trends — a higher chance of denial for consulting firms, and higher chance of approval for health care employers — were only more heavily emphasized in 2020 with COVID in the mix. The pandemic shut down the freedom of travel, and took down several industries with it, including consulting.

“The IT consulting firms, and this is a generalization, but they tend to hire people abroad,” Fitzgerald said. “For the last 18 months, nobody can come in ... so their numbers are way down.”

The process became even more difficult when the Trump administration temporarily suspended H-1B and other visas permitting foreign workers in June of 2020, as part of an effort to limit the entry of immigrants into the U.S.

Once again, the industry impacted to the greatest extent under the Trump administration was consulting, Swapp said. The government challenged consultant petitions on two grounds: its educational requirements and its business model.

“The government took the position that, and this may sound silly, that the MBA was not a professional academic preparation for a specialty worker, which is the definition for an H-1,” Swapp said.

Massachusetts houses an abundance of biotech companies, and several of the top consulting firms across the globe have headquarters in Boston, like the Boston Consulting Group and Bain & Co.

The state’s H-1B data over the past few years thus paints a vivid example of how numbers have trended as a result of the pandemic and immigration policies.

“It’s interesting to see all these companies like Amazon and Microsoft and Google taking big leases in Boston because they want to get access to the talent,” Fitzgerald said, “but they’re going to have the same problem.”

As with everything else, 2020 fostered some changes.

What remains consistent are the two industries at the two ends of the spectrum: health and research continued to have a high ratio between approval and denial numbers, and employers like the Massachusetts Institute of Technology and Massachusetts General Hospital received minimal denials.

Similarly, consulting and finance firms like Deloitte and BCG topped the denials in 2020.

Many health care employers, for the most part, were able to find comfort through exceptions like the separate requirements for nonprofits and the National Interest Exemption.

“Anybody working within a hospital environment would be, should be, per se, eligible for a national interest exemption,” Fitzgerald said, “and then companies like Wayfair and Amazon that are involved in infrastructure, involved in keeping the wheels of the economy moving, would also have a pretty good shot.”

As for the other exemption, nonprofit institutions, universities, and university affiliates are not subject to the H-1B cap. In other words, these employers do not have to participate in the lottery system. In 2020, Harvard and MIT were among the top employers with the highest approvals, and both had zero initial denials.

Gail Robinson, immigration manager at Boston Children’s Hospital, wrote in an email that they are not limited in the number of H-1B petitions they are able to sponsor and thus can file at any time throughout the year.

Many health care workers are licensed, Swapp said, in that they have very specific academic preparation that’s required.

“Therefore, it was less susceptible to challenge by the government,” Swapp said, “and frankly, many of them [are] nonprofits, so the government had other industries to target, and they spent their time focused on the private sector.”

With that being said, COVID still raised some challenges and has made the overall visa sponsorship process “longer and more difficult,” according to Robinson.

BCH had only one denial each year in 2019 and 2020, though those cases were denied for other eligibility reasons.

“I believe the denials are for cases where the H-1B beneficiary was approved for U.S. permanent residency,” Robinson wrote, “while the H-1B petition was pending which led USCIS to deny the H-1B as the beneficiary was no longer eligible.”

However, Fitzgerald pointed out that several weeks ago, the Biden administration defended a Trump-era use of an immigrant expulsion order in court, a move that concerned many immigration lawyers, he said.

“If you look at the Biden immigration platform … there’s no mention of business immigration until [lower] on the list,” Fitzgerald said.

With two more months left of 2021, USCIS has yet to release this year’s data. However, with the petitioning deadline in April and lottery process over the summer, Swapp said applications this year increased by over 50% as compared to last year.

This means that obtaining a H-1B visa will only get harder as competition increases in number.

Swapp sees an “overall math problem” between the insufficient number of people to meet the demand for corporate America, particularly in the STEM disciplines. American companies are struggling to hire recent graduates because a majority of students in U.S. STEM programs are foreign nationals.

“As a result, U.S. companies are essentially forced to sponsor workers,” Swapp said, “because they’re struggling to find that talent.”

Supply chain shortages have occupied America and accompanying that is the huge shortage of workers on both the high and low skill ends. This includes the lack of foreign service workers in overseas embassies, which are currently experiencing long processing times as a result, Fitzgerald said.

“We got a similar situation where we’re short workers, these companies are desperate, but it becomes a political issue,” Fitzgerald said, “because now they say, ‘Wait a minute, are there plenty of U.S. workers who can do this work?’”

The next big issue that is going to arise before next March, Fitzgerald said, is regarding the salary ratio, or “prevailing wage,” another lingering effect of the Trump administration. Under this rule, foreign employees must be paid 40% more than a U.S. worker that is doing the same job, Fitzgerald said.

The tension then is between the lack of U.S. talent in various STEM disciplines, the limited number of H-1B visas available, and the ever-increasing employment petitions from foreign nationals.

“We have a chance to own the next Industrial Revolution,” Swapp said. “If we don’t allow that talent into the United States to ideate new technologies with U.S. companies, then those companies will go where that talent is.”

Chloe Liu is a reporter with the Boston University Statehouse Program.