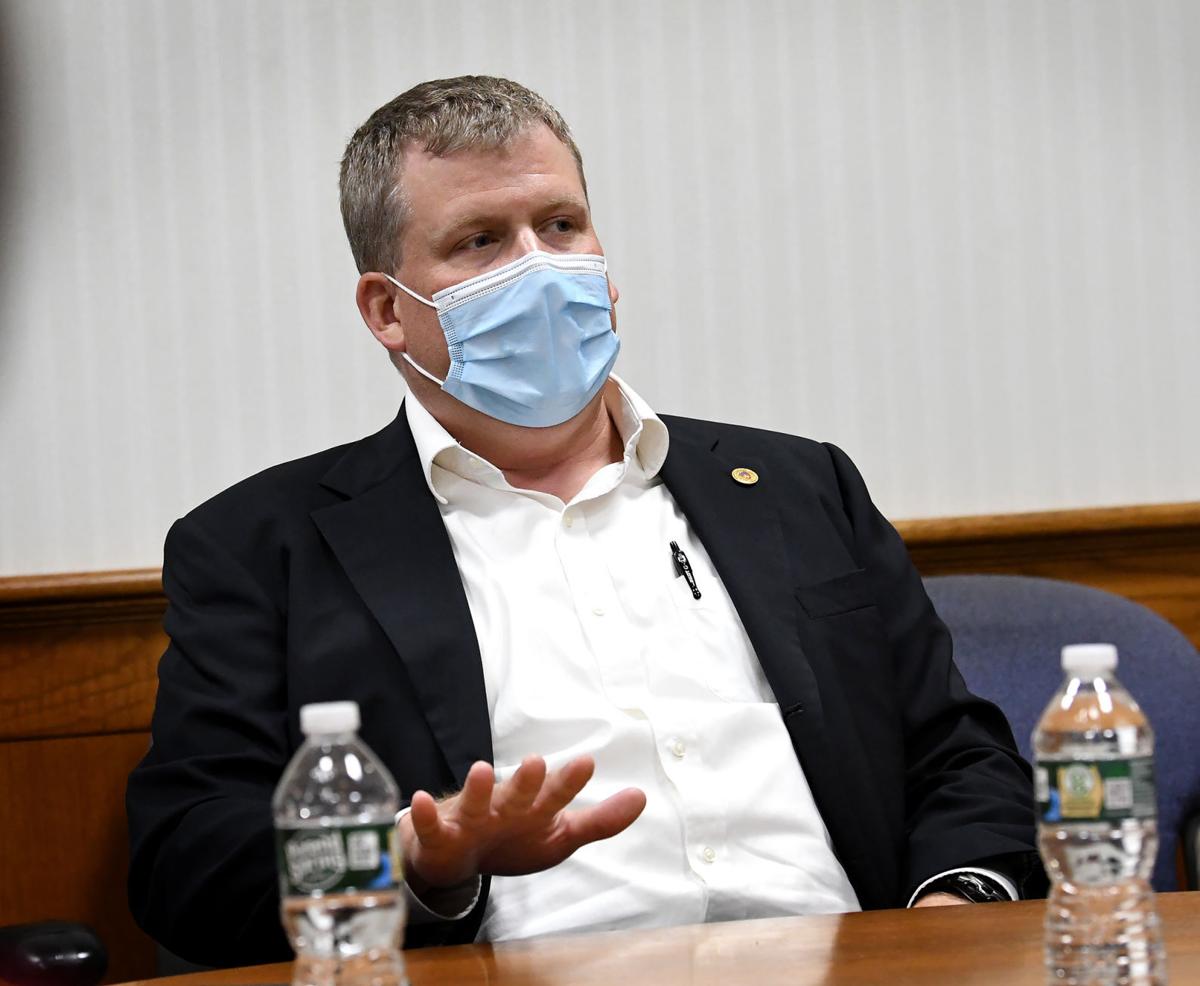 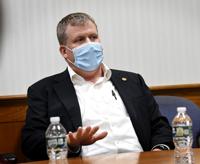 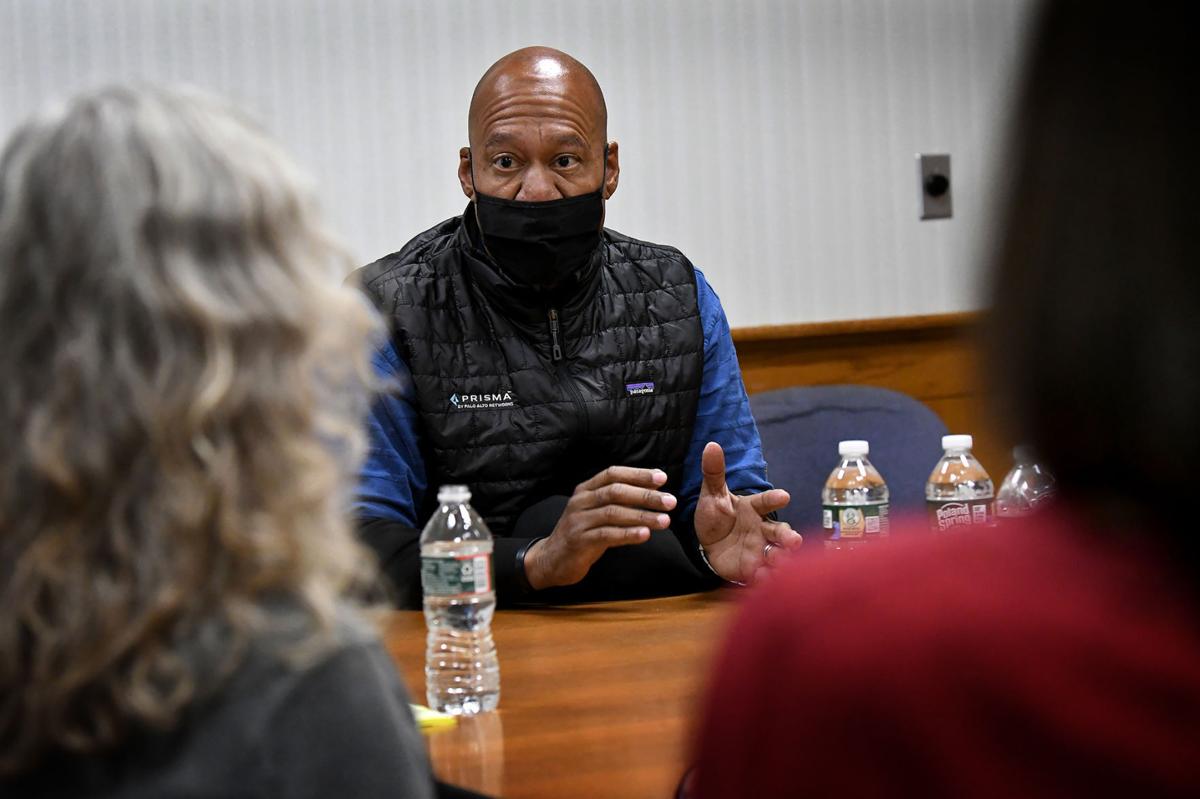 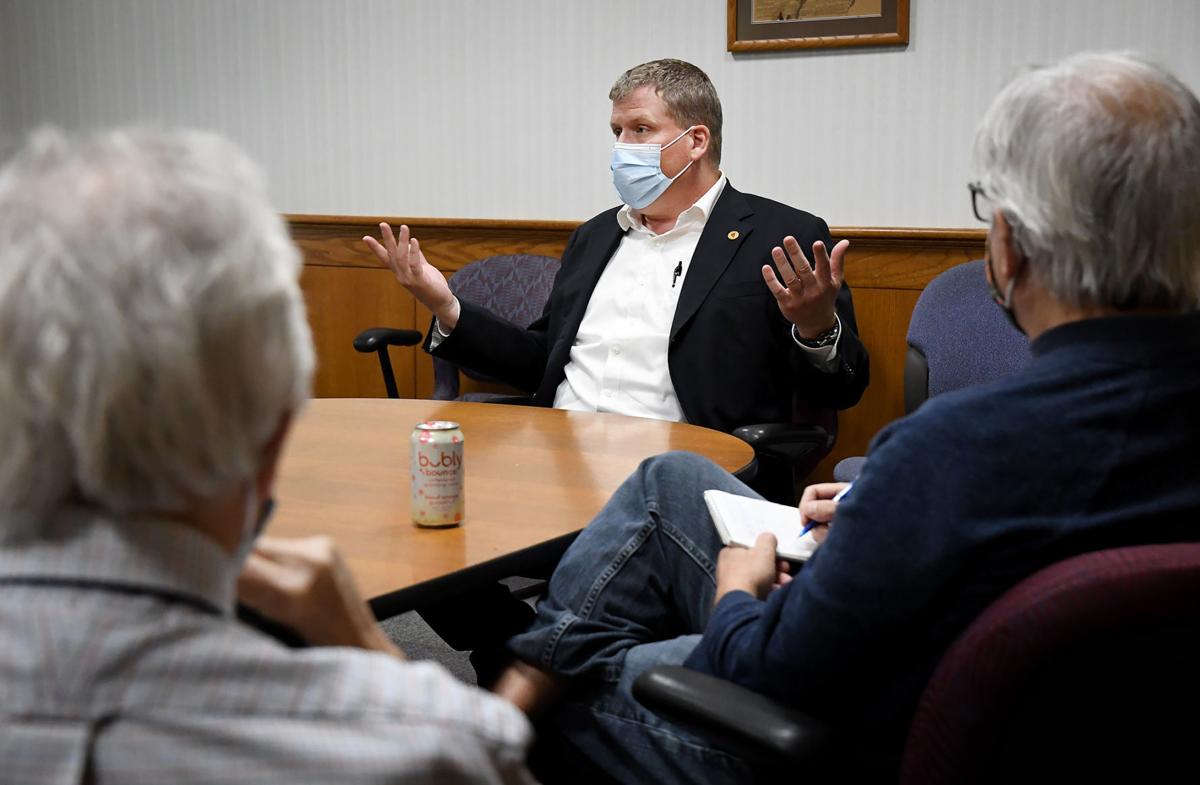 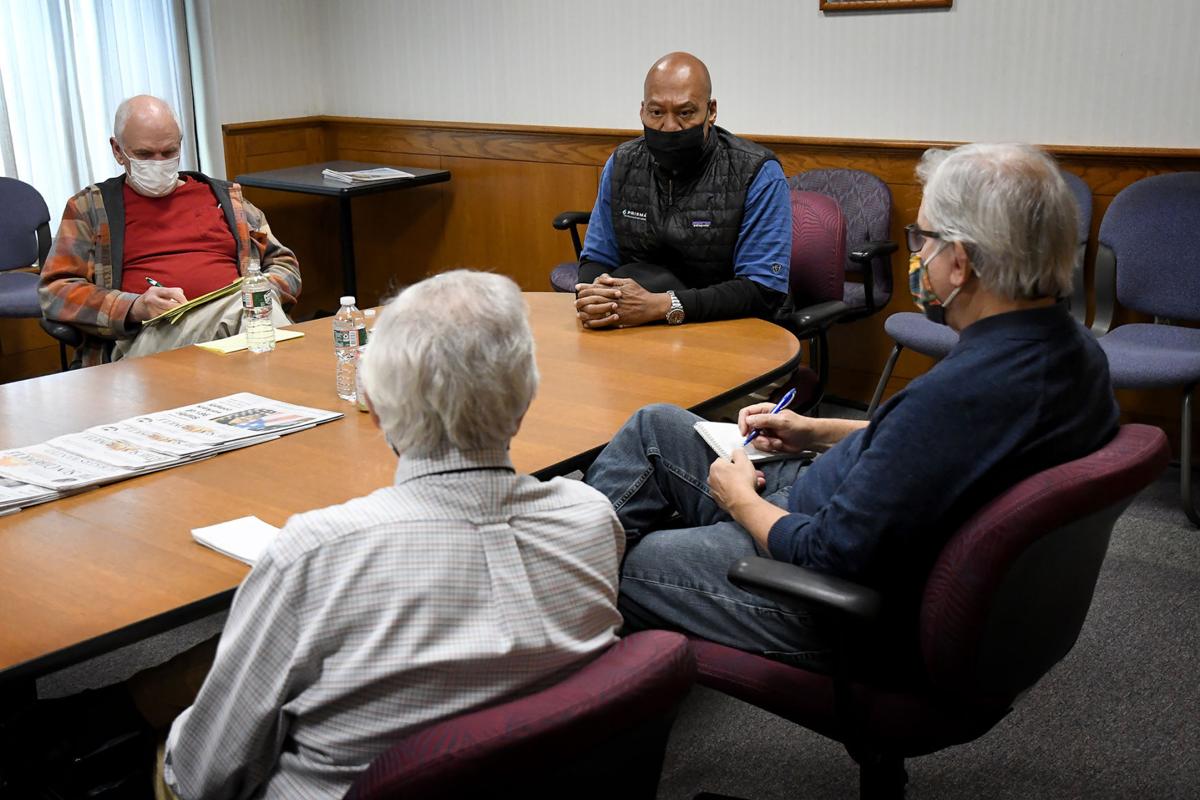 ATTLEBORO — Mayor Paul Heroux and his challenger Todd McGhee both appeared before The Sun Chronicle editorial board recently for wide-ranging discussions.

The end result will be an endorsement for one or the other.

Here is some of what the mayoral candidates had to say.

Heroux, currently a two-term mayor, has said many times he’ll serve no more than three terms.

And that led to a question as to whether that would create a lame-duck status for him, making it more difficult to govern.

But Heroux said he has no regrets about limiting himself to three terms and believes, if reelected, that it will not make any initiative he brings forward to the city council harder to get approved.

“I don’t think it will make my job more difficult,” he told the panel. “The things I propose pass on their own merits.”

Having said that, he noted that some councilors already “reflexively reject” anything he proposes, but measures are passed despite that.

He noted that most of his efforts to make Attleboro cleaner and greener were approved.

It’s the proposed 75-foot no-disturb wetlands restriction zone which the council is considering and will vote on before the end of the year.

And three of the four budgets he has proposed passed with no amendments.

Heroux said he put his three-term limit in place because he wanted to assure people that he would not be another “mayor for life,” referring to the long tenures of the late Judy Robbins, who served six terms, and former mayor Kevin Dumas, who served seven.

They are the third- and second-longest serving mayors out of the city’s 18 chief executives. Cyril Brennan served eight terms in the 1950s-1960s.

And, Heroux said, the election campaign for his current term against former council Vice President Heather Porreca, which took on a nasty tone at times, “took a lot out of him.”

But this one has been less stressful.

“Mr. McGhee has been a gentleman,” Heroux said.

If reelected, the mayor said he’s hoping to end his stint as mayor in a positive way.

“I’m looking to finish off some projects and finish on a high note,” he said.

And some thoughts have already turned to the future. When he’s done being mayor, he said he’ll run for some other office. If not immediately, then at some point.

But it won’t be for governor, state representative (a job he held for six years) or sheriff. He said he wouldn’t win a governor’s race and he’s been there and done that with the other two.

“I’ve already been to jail and prison and I don’t want to go back,” he joked referring to one of his jobs early in his career at the Philadelphia prison system.

He didn’t discount running for the 4th Congressional District seat, however.

If he doesn’t run right away he said he’ll go back to school and get a Ph.D in criminology or statistics.

If reelected much of his time will be devoted the continuation of downtown revitalization.

“We have a two-pronged approach there,” he said. “Rehabbing the old mill buildings and getting more people to live in the center.”

That’s the key to reviving a once vibrant downtown, he said.

The aim is to focus on service industries like restaurants — which provide things people can’t order online from places like Amazon.

The goal is to attract people with disposable income from the Boston area, where rents are much higher, to the center of Attleboro where there’s a commuter rail station for trips to Boston or Providence just steps away from their front doors.

There are also new buildings to attract them.

One Wall Street, with 136 apartments, and Renaissance Station, with 80, are up and running. And 37 Union is undergoing renovation into 59 units, some of which are designated “affordable.”

Then there’s the former Briggs Hotel on South Main Street, which is scheduled to be razed and replaced by another new apartment building.

Meanwhile rats are running rampant and that’s become an issue.

Unless a private property is unoccupied and causing a rat problem in a neighborhood, the city can’t do anything, except offer advice.

He criticized McGhee for saying he would get the city involved in remediation as a “health emergency.”

McGhee has criticized Heroux for failing to move forward with the performance pavilion promised for Highland Park more than a year ago.

But Heroux said the coronavirus pushed that project temporarily to the back burner, but not off the stove completely.

He said plans are alive and well to put it near the new parking lot at Highland, which is currently used by construction crews building the new high school.

And he said there’s a plan to separate the former Highland golf course clubhouse and five acres surrounding it and sell it to a business.

That effort would involve rezoning the area for business, he said.

Getting a developer to buy the old high school on County Street is more of a problem.

He said the restriction imposed by the council to keep the façade is a deal killer and it has to go.

A question was asked of what the mayor is most proud.

He said right off the top that the new high school being built on time and on budget is one. Actually it is currently a little under budget.

Heroux said one of his best qualities is communication with the public through his Facebook account where he talks about his daily tasks and takes on issues like coronavirus.

He said he’s proud of his efforts to make Attleboro cleaner and greener and noted solar arrays will soon be going up over city-owned parking lots to produce electricity.

And he also touted the fact that he’s funded education at $10 million over the required net school spending minimum in the four years of his administration.

Challenger Todd McGhee said he wants to work with people rather than against them.

“What’s important is to bring people to the table,” he said. “I’m running on collaboration and I’m going to stick to collaboration. My way isn’t the only way.”

While he currently owns a security business, he has notified clients that he’ll be stepping back if elected.

“I don’t have employees and my partner and I downsized years ago,” he said. “I’ll be solely dedicated to the city.”

He said managerial skills picked up in the public sector as a state trooper and in business are transferable to managing the city.

But that said, there will be a learning curve, but that is not unusual.

None of the last three mayors have come into the office with extensive managerial experience.

Robbins and Heroux had extensive political experience, but both were in the legislative end of politics and Dumas didn't even have that.

“I know there’s a lot to learn, absolutely,” McGhee said.

He said he wants to remedy quality of life issues plaguing residents, one of which is the rat infestation in the city.

One way is to declare a public health emergency and work with residents to find the nesting areas and eliminate them, he said.

He would also push for more affordable housing, while noting that some new homes in the city are selling for as much as $700,000.

“That’s great, but you can’t forget about other individuals,” he said.

He acknowledged Heroux has been very active in seeking to make the city greener and cleaner but said he’s failed in some aspects to adequately inform residents about others, such as the 75-foot no disturb zone now being considered by the city council.

“We as residents have to know what these policies mean,” said McGhee, who spoke against the proposal at a recent public hearing.

What is needed is to find the businesses that attract them to the center such as free WiFi cafes.

McGhee criticized the mayor for not getting bids for the new trash contract.

“It would have been nice to pull bids,” he said. “How do we know we got the best bid?”

McGhee, who is Black, said his race is not an issue for him because he’s has been the first in a number of positions and being the first Black mayor is not something he aims to tout.

Similarly, former mayor Dumas, the first openly gay mayor, said he did not want to be a poster child for the gay population; he just wanted to do the job of mayor.

“It’s not about me,” McGhee said. “It’s about the citizens and their quality of life issues.”

He said he’s not an activist for Black Lives Matter and noted he spoke against the controversial critical race theory at a recent school committee meeting.

McGhee said there’s been a lack of planning for Highland Park and would like to see it used for multiple purposes such as outside classrooms.

“There are great opportunities for that space, but it’s about planning,” he said.

He said the gunshot detection system being put into the city’s nine schools works in that it notifies law enforcement faster and can pinpoint from where the shots come.

But he said it’s “reactive,” and more is needed.

Proactive efforts are needed to prevent school shooters in the first place and one way to do that is with more adjustment counselors who are trained to pick up on potentially dangerous individuals, he said.

“I would much rather have a mental health response than a criminal justice response,” McGhee said.

The election is Tuesday.

Based on history, about 70 percent of registered voters expected to stay home for Attleboro election

ATTLEBORO — The city election is Tuesday.