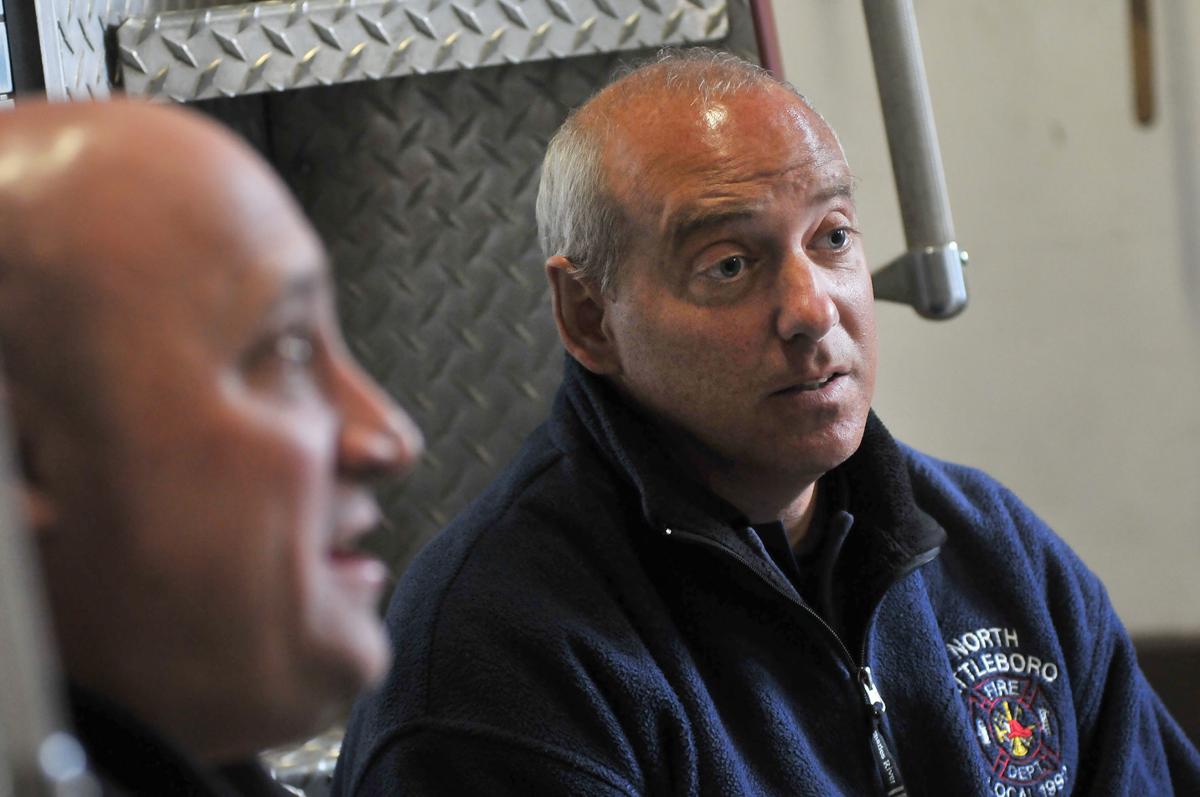 Retired North Attleboro fire Captain Rick Stack said several incidents over a 26-year career as a firefighter and paramedic contributed to his struggles with post traumatic stress disorder, or PTSD. ““I had all this baggage. I didn’t know how to deal with life,” he said. Here, he talks about his experience with Attleboro firefighter Paul Jacques. 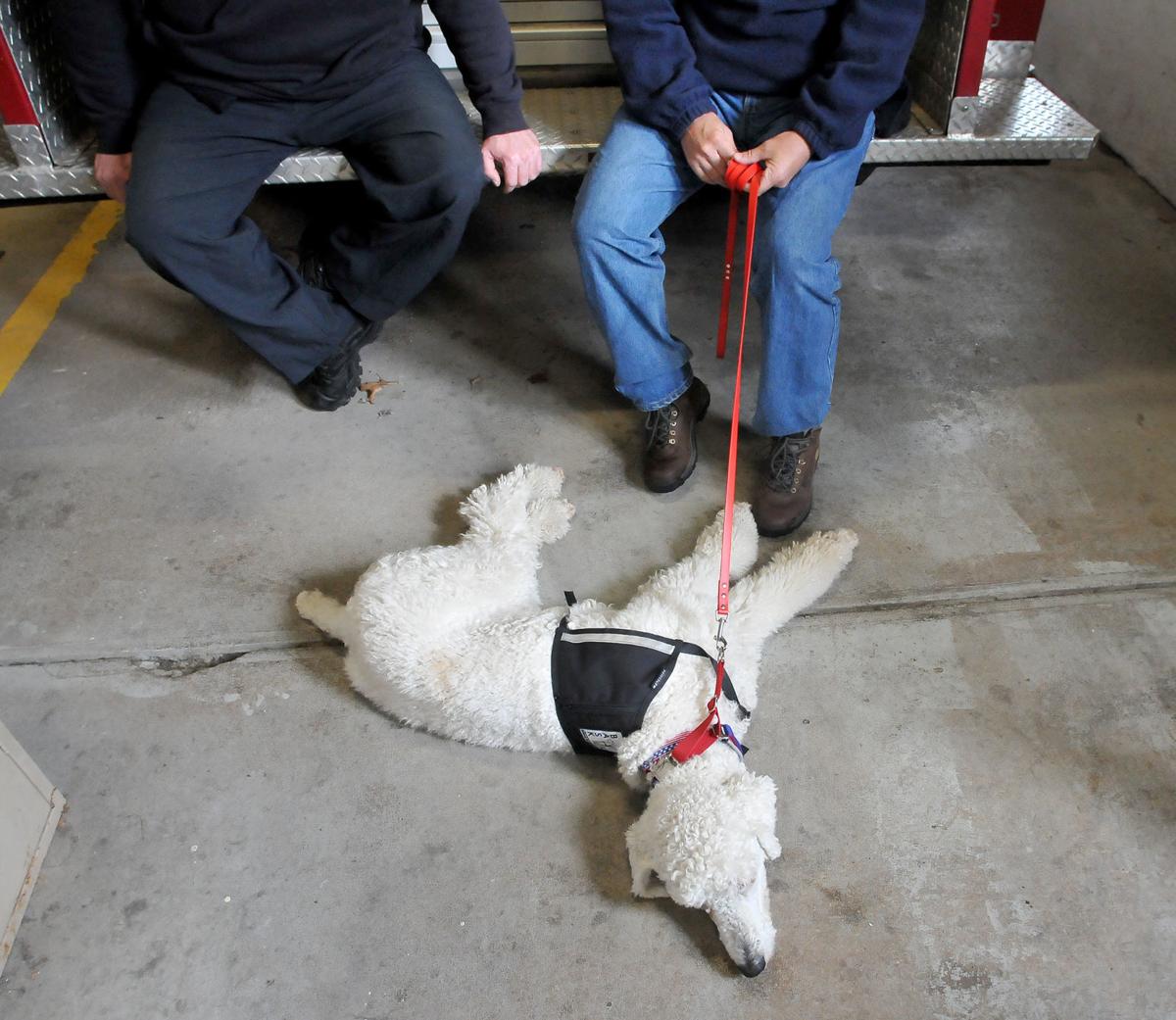 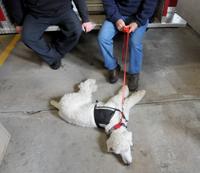 Stack’s service dog, Halligan, rests at his feet as Stack and Jacques talk. Halligan, who can sense when anxiety is taking a grip on Stack, is with him nearly all the time. 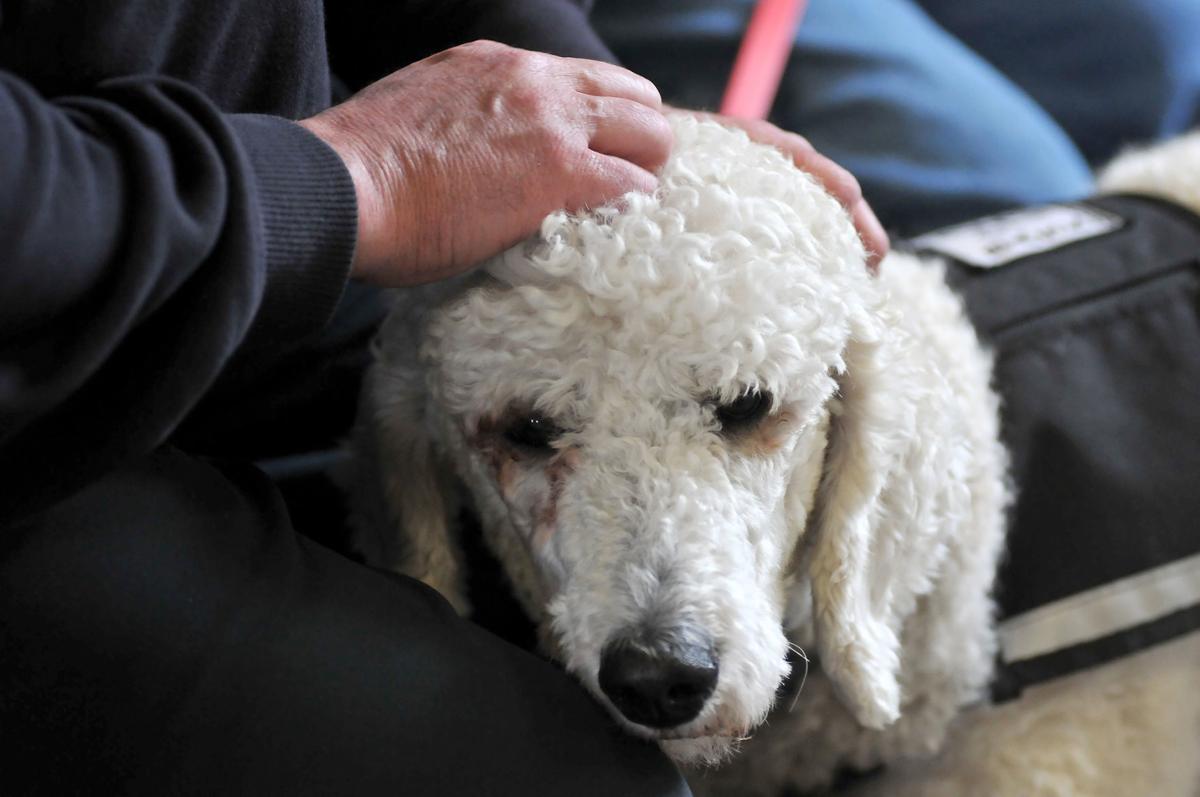 Halligan, Stack’s service dog, can sense when the stress hormone cortisol rises in his body. The dog nudges him to break the cycle, Stack said. 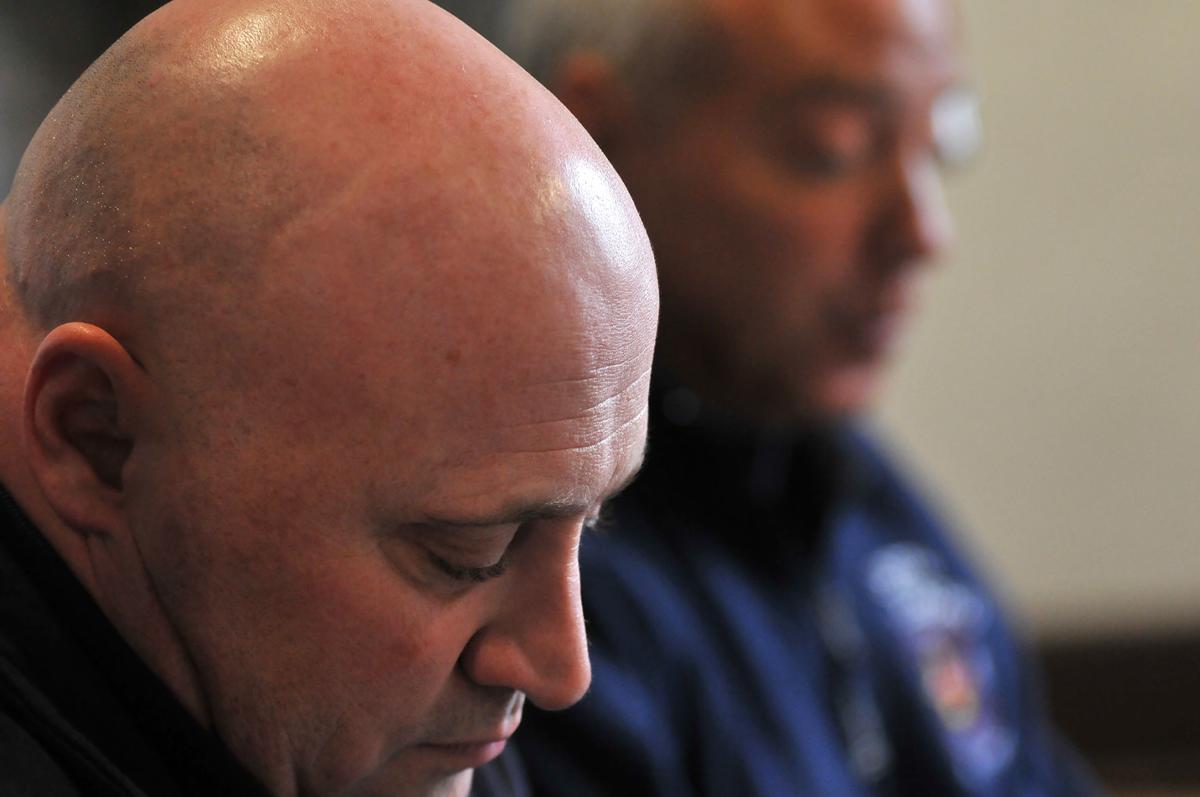 Attleboro firefighter Paul Jacques, left, and retired North Attleboro fire Captain Rick Stack talk about PTSD and how it has affected their lives. 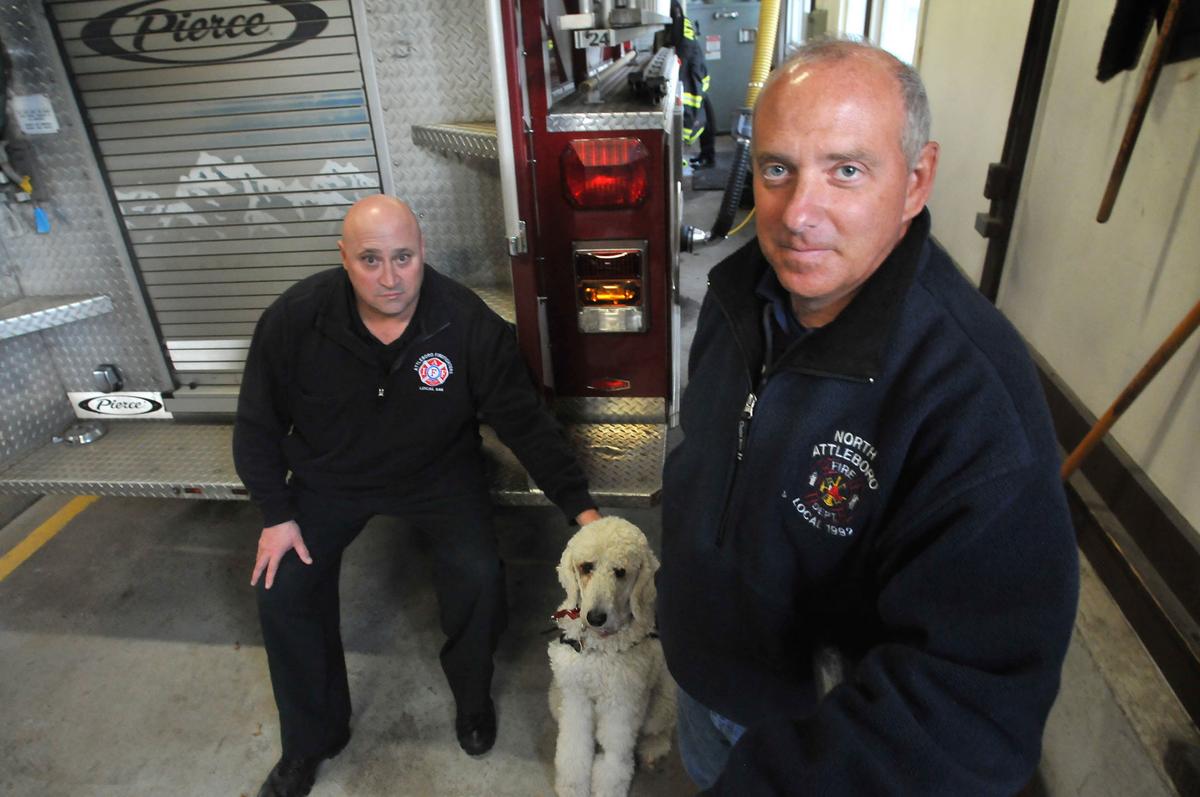 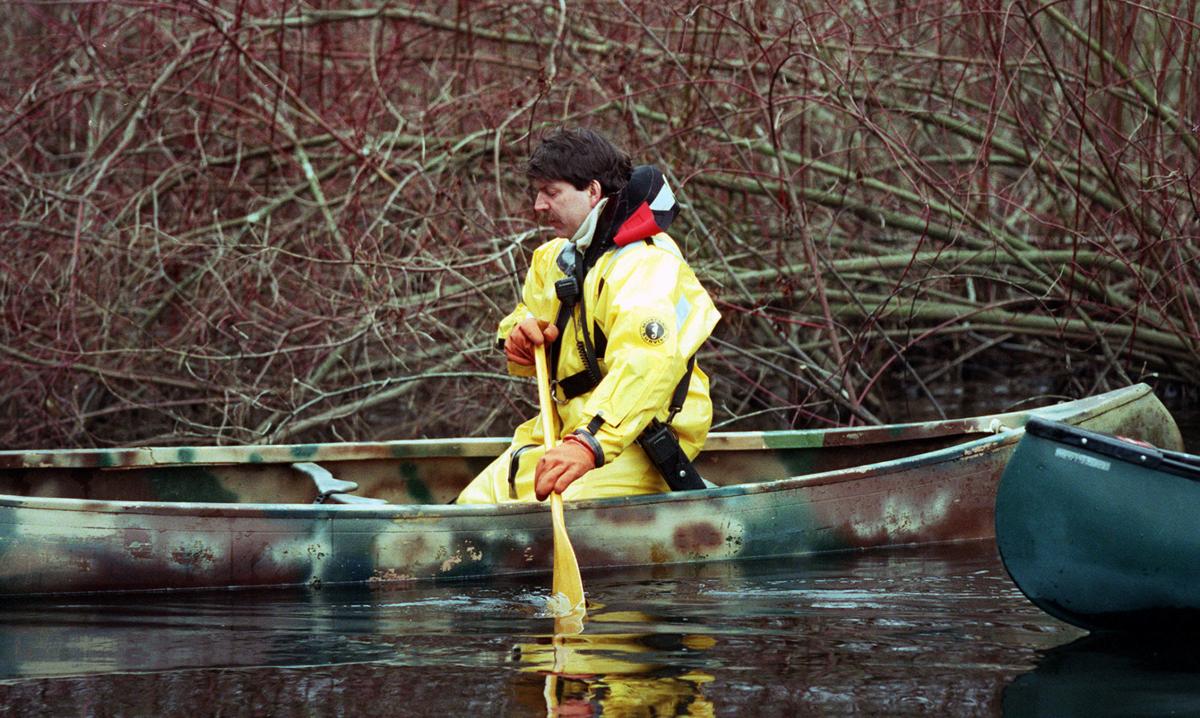 In February 1999, Norton firefighter Peter MacLean participated in the search for 9-year-old Corey Anderson, a Norton boy who went missing during a blizzard. Less than half an hour after this photo was taken and about 100 yards from its location, MacLean spotted the boy’s coat.

Retired North Attleboro fire Captain Rick Stack said several incidents over a 26-year career as a firefighter and paramedic contributed to his struggles with post traumatic stress disorder, or PTSD. ““I had all this baggage. I didn’t know how to deal with life,” he said. Here, he talks about his experience with Attleboro firefighter Paul Jacques.

Stack’s service dog, Halligan, rests at his feet as Stack and Jacques talk. Halligan, who can sense when anxiety is taking a grip on Stack, is with him nearly all the time.

In fact, it comes back to him in haunting dreams.

The girl was trapped in a car, badly hurt in a crash on Route 1.

Stack was a lieutenant in the North Attleboro Fire Department and one of the first on the scene.

As other firefighters worked with hydraulic tools to try to free the girl, Stack climbed in the passenger side window over broken glass to comfort her.

He said he took her hand and “she squeezed it so tight I thought she was going to break it.”

Stack assured her his crew was working to get her out and everything would be all right.

But her breathing slowed, then stopped, and the life left her face.

“It will never leave me, that look on her face. It takes a piece of you,” he said.

After all these years, the memories are vivid and frequent. The sights, sounds, even the feeling of the broken window glass on his knees.

“I have flashbacks, dreams,” he said.

Stack, 50, said the death of the girl is not the sole reason he struggles with post traumatic stress disorder. It was one of several incidents over a 26-year career as a firefighter and paramedic that wore him down.

So many broken, burned and dead bodies. So many lives ruined or ended.

The breaking point came when he wasn’t even on duty.

He was driving down Route 146 when he saw a man intentionally step in front of a speeding truck and get killed.

Later at work, he was training a new recruit to the fire department when he started shaking. He went to another officer and said, “I need some help.”

Stack said he and other first responders were always told to “suck it up and get back on the truck” when they had to deal with tragedy and death.

But, the psyche doesn’t work that way. Exposure to awful and deadly incidents chips away at the spirit, he said, and it starts to impact all aspects of your life, including your marriage.

“I had all this baggage. I didn’t know how to deal with life,” he said.

Stack said he went on leave because of his problems and entered a program for first responders started by McLean Hospital after the Boston Marathon bombings.

One of his main worries, he said, was that he suspected other firefighters were judging him, wondering if he was tough enough for the job.

He returned to work, got promoted to captain, but then realized he wasn’t cured and probably never would be.

The father of a teenage girl, Stack went for a 45-day stay at Center for Excellence, a behavioral health institute run by the International Association of Firefighters in Maryland.

The treatment and peer support he received there went a long way toward helping him cope, but still, he retired last November.

Since then he has been given a service dog that he said can sense when anxiety is taking a grip on him and the level of a stress hormone called cortisol is on the rise in his body.

The dog will respond by nudging him to break the cycle, he said.

He said the younger generation is more open to the subject than older firefighters who think they cannot talk about their problems because they will appear weak.

“We’re raised to be tough,” Jacques said. “But, you can only see so much death and tragedy before it affects you.”

Instead of seeking help, his generation “self-medicated” with booze, he said.

That is why the state firefighters union has made legislation dealing with PSTD in first responders one of its top priorities for this year.

Jacques said first responders have to start getting counseling early on so problems don’t build.

Darshan Mehpa, medical director for the Benson-Henry Institute for Mind Body Medicine at Massachusetts General Hospital, said PTSD is fairly well known among the military, but PTSD in first responders is just now becoming a popular area of research.

“It’s obviously a very emerging area,” he said. “It’s a very pressing issue and the data is coming out as we speak.”

Mehpa said research was prompted by difficulties New York City police and fire personnel had dealing with the aftermath of the 9/11 terrorist attack on the World Trade Center.

PTSD can be marked by flashbacks, bad dreams, avoidance of social situations, problems sleeping, and unexplained outbursts of anger.

Feelings of guilt and a loss of interest in everyday life are common, Mehpa said.

It can be treated with counseling, medication, exercise and coping skills.

But, first responders have to get over the stigma of seeking help because it can be triggered at any time, he said.

Jacques and Stack said having children of their own makes dealing with tragedy among young people all the harder because the responder can more closely identify with the victim.

That is what happened to former Norton firefighter Peter MacLean.

Twenty years ago he was paddling a canoe on Mulberry Meadow Brook looking for a 9-year-old boy who had wandered away from home during a blizzard and went missing.

He said he came around a bend in the brook when he saw the black and yellow of a Boston Bruins jacket on the shore, the same kind of jacket wore by the missing Corey Anderson.

The boy was dead, and a massive search by state and local police, firefighters, prison guards and volunteers was too late.

Thoughts immediately turned to his own children, MacLean said.

“It obviously had an affect. It put a tremendous strain on everybody. It was a tough time for everybody. We’re human just like everyone else and we have emotions,” he said.

Making matters worse was the boy was found in the very area MacLean played in as a boy, just a couple of hundred feet from Anderson’s home.

“I knew every inch of that area,” he said.

George Burgess, fire chief at the time, told MacLean he knew MacLean would be the one to find the boy because he knew the ground so well.

Now retired and living in Dighton, where he makes canoes and furniture in his wood shop, MacLean said the search and the loss of the boy took a piece of everyone involved.

Stack said it is important that fellow first responders learn the warning signs that a colleague might be in trouble.

The issue is important to him, he said, which is why he speaks out whenever possible.

He talks to groups of firefighters as far away as Connecticut, has done a number of newspaper interviews, and will soon appear on radio.

“I’ve been given an opportunity to help and I’m going to take it,” Stack said.

The National Institute of Mental Health says post traumatic stress disorder, or PTSD, “is a …

After 20 years, a Norton tragedy remembered