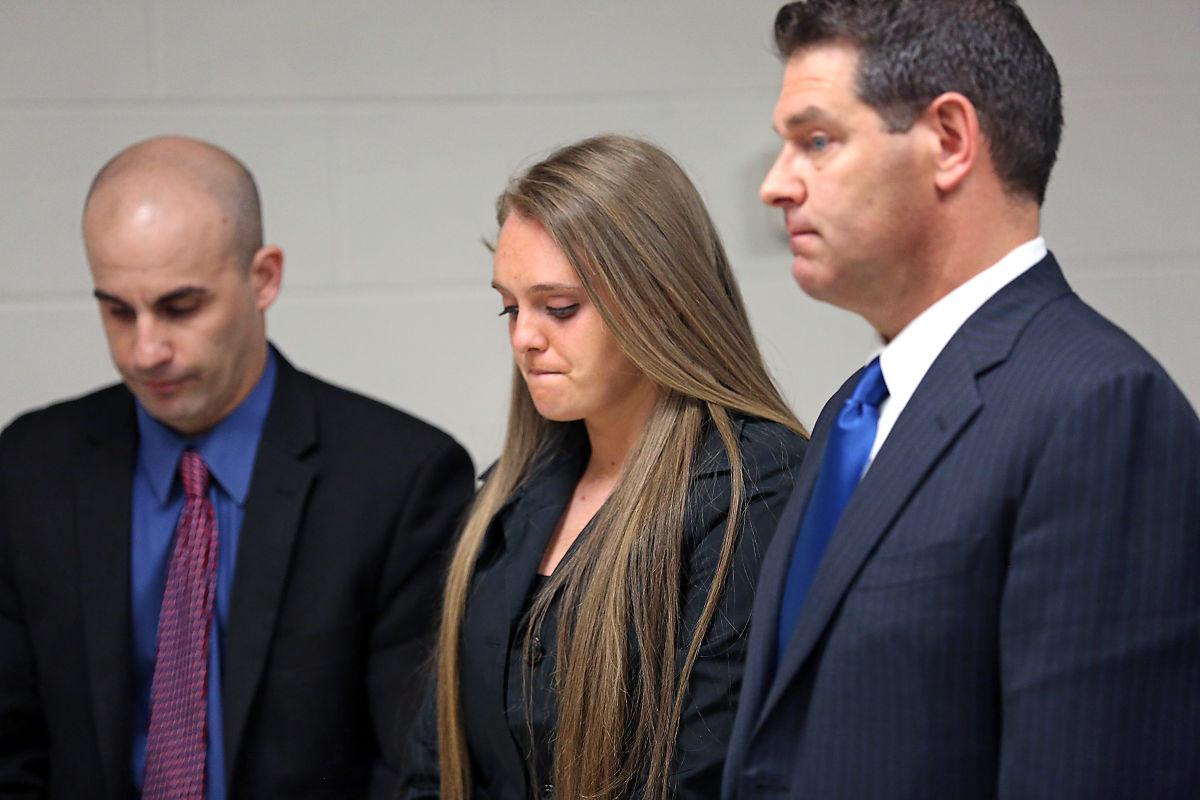 Michelle Carter appears for a hearing in court with her attorneys Cory Madera, left, and Joseph Cataldo, in New Bedford in April.  (John Wilcox/The Boston Herald via AP, Pool) 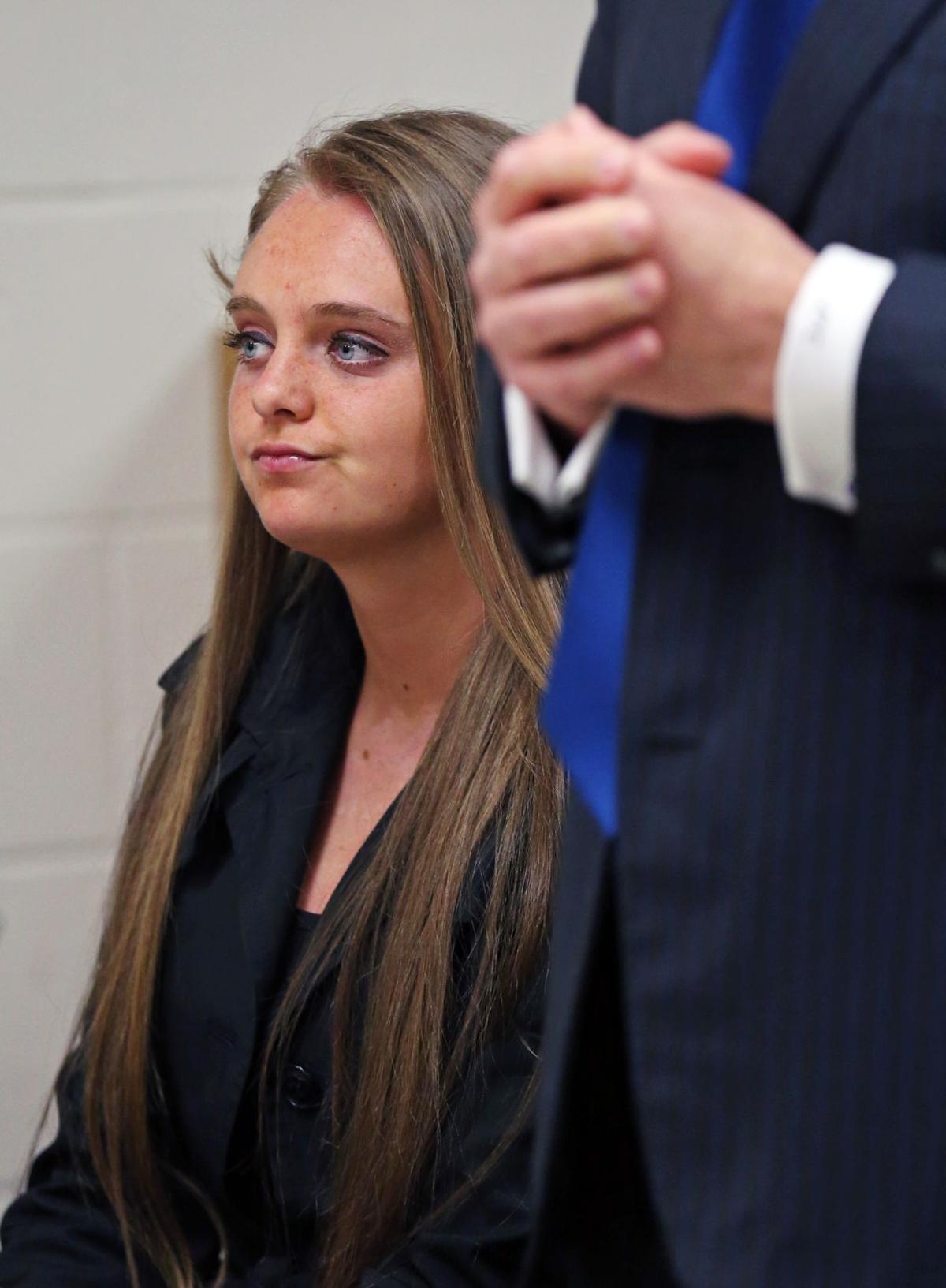 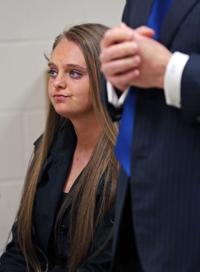 Michelle Carter listens as one of her attorneys, Joseph Cataldo, right, speaks on her behalf during a hearing, April 23, in New Bedford. (AP Pool, file photo.) 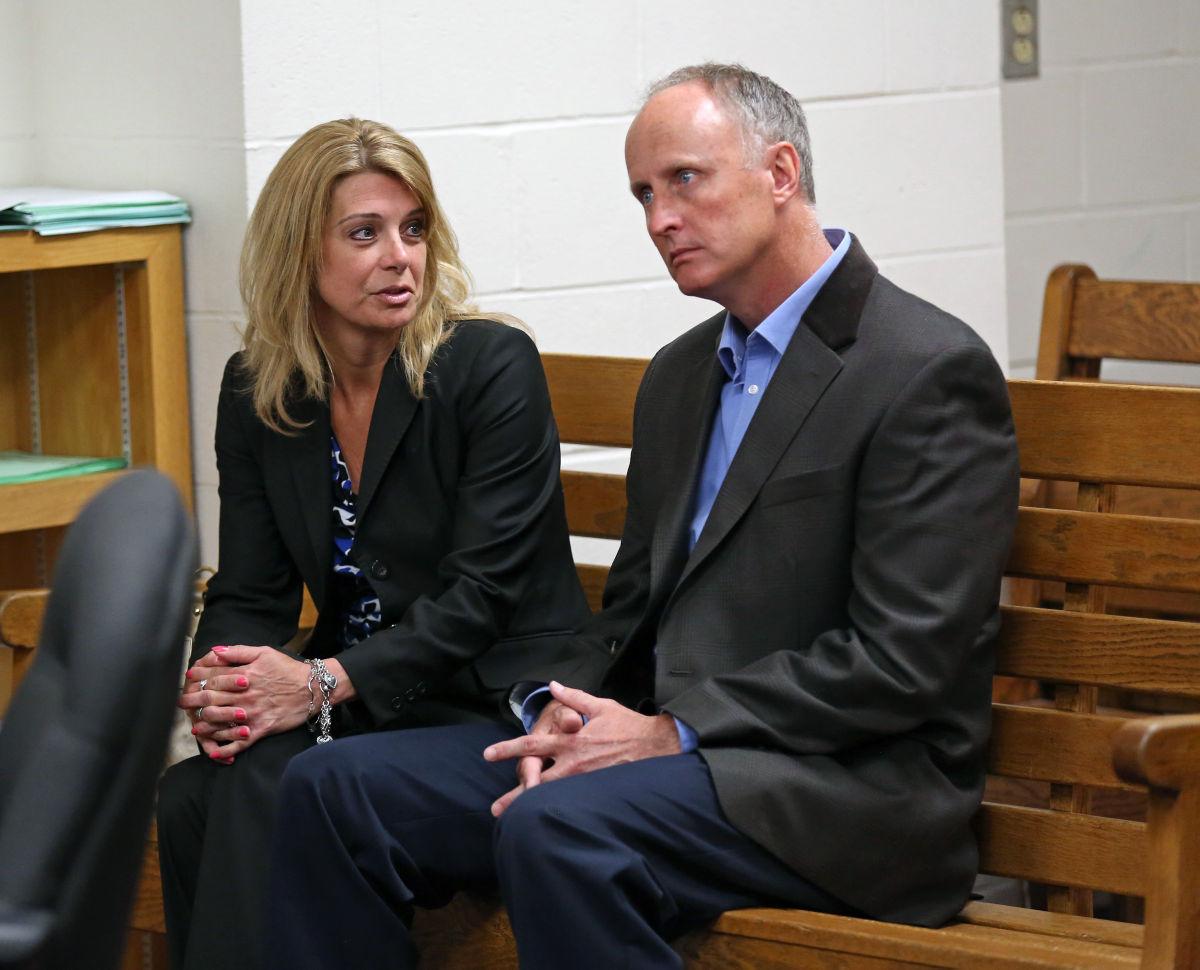 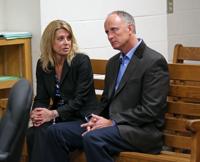 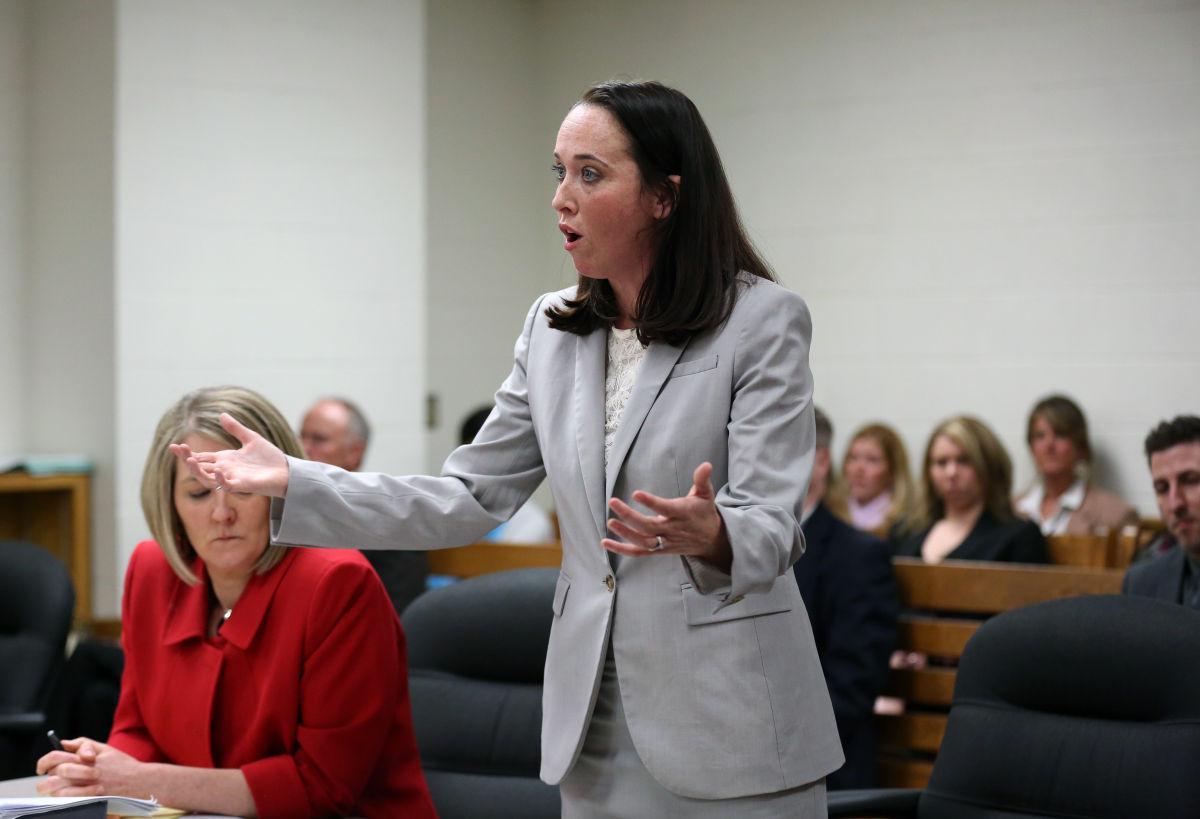 Assistant District Attorney Katie Rayburn presents her side of the argument during a hearing for Michelle Carter, Thursday, in New Bedford.  (John Wilcox/The Boston Herald via AP, Pool) 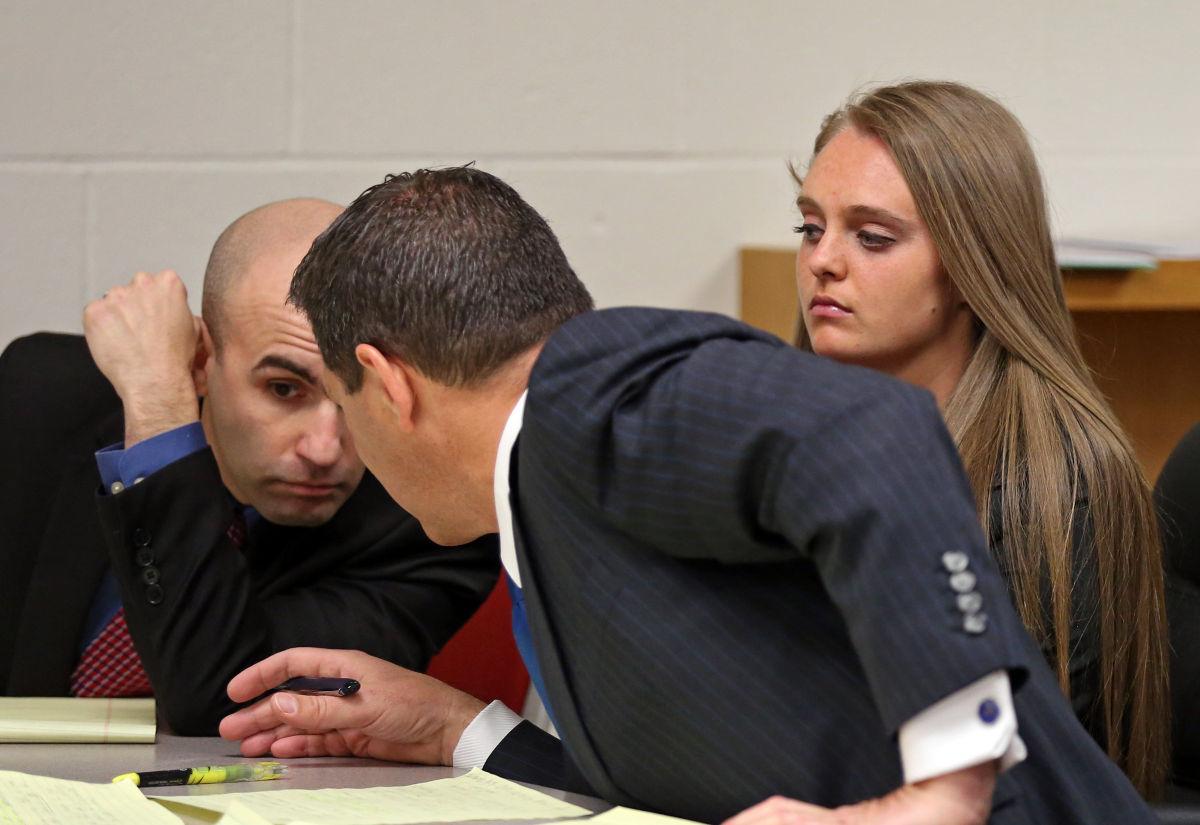 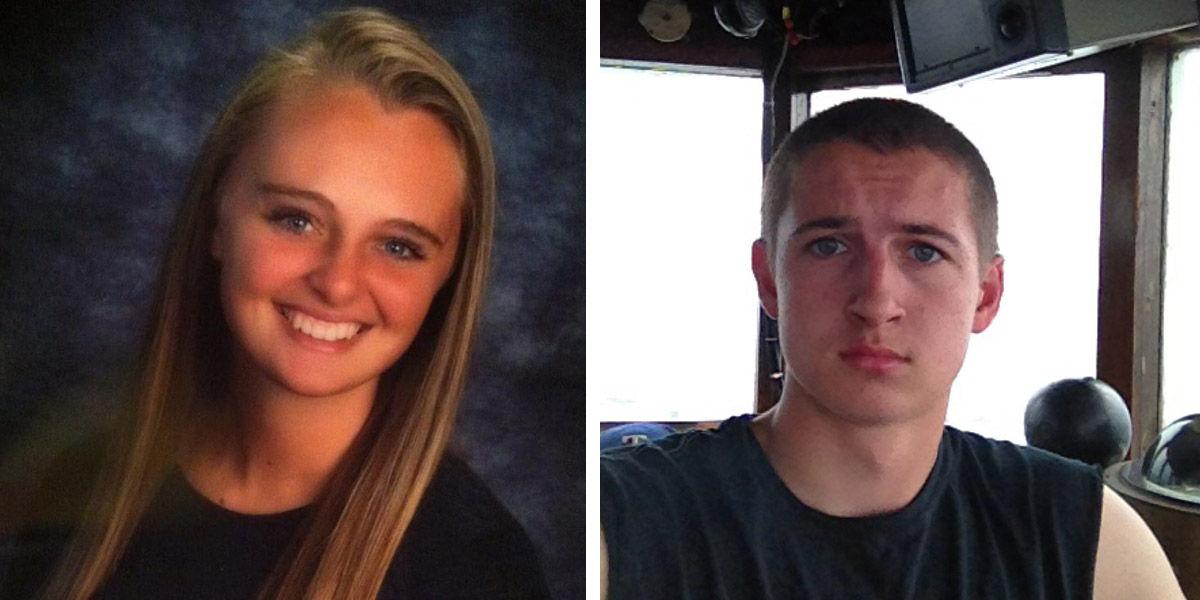 Michelle Carter appears for a hearing in court with her attorneys Cory Madera, left, and Joseph Cataldo, in New Bedford in April.  (John Wilcox/The Boston Herald via AP, Pool)

Michelle Carter listens as one of her attorneys, Joseph Cataldo, right, speaks on her behalf during a hearing, April 23, in New Bedford. (AP Pool, file photo.)

Assistant District Attorney Katie Rayburn presents her side of the argument during a hearing for Michelle Carter, Thursday, in New Bedford.  (John Wilcox/The Boston Herald via AP, Pool)

NEW BEDFORD — The defense attorney for Michelle Carter said Thursday the Plainville teen is “bewildered” over involuntary manslaughter charges against her for the suicide death of her friend Conrad Roy III.

Attorney Joseph Cataldo said outside juvenile court in New Bedford that once the whole story comes out about Carter’s relationship with Roy it will be shown that she urged him not to kill himself.

Prosecutors say they have text messages from Carter to Roy encouraging him to go through with the suicide. They said when Roy tried to change his mind and not kill himself in his vehicle in the parking lot of a Fairhaven Kmart last July, she texted him and told him to get back in the vehicle and do it.

“Taking all the texts in context, she tried to talk him out of it,” Cataldo said.

He said the Plainville girl is “bewildered” over the case against her.

Carter, who is 18 now, was 17 at the time of Roy’s death. She is being prosecuted as an adult under the youthful offender law and has pleaded not guilty to the charges.

“Michelle Carter did not cause his death,” Cataldo said. “He caused his own death. She doesn’t understand why she is being prosecuted.”

Cataldo would not comment on whether Carter is still attending King Philip Regional High School. School policy calls for a student to be suspended if charged with a felony.

His comments came after a hearing on a defense motion to have the entire Bristol County District Attorney’s office disqualified from the case and a special prosecutor appointed.

He said District Attorney Thomas Quinn admits that Roy, who lived in Fairhaven and Mattapoisett, is his third cousin.

Quinn has recused himself from any involvement in the case, but Cataldo repeatedly said in court that prosecutors in Quinn’s office know he is a “blood relative” to Roy.

Those prosecutors owe their jobs, and future promotions to Quinn, giving the public appearance of a conflict of interest, he said.

“Everyone in that office knows it is the boss’s cousin, a blood relative,” he said.

Cataldo also said there is a constitutional issue at stake because the United States and Massachusetts constitutions guarantee that prosecutors should be “disinterested” parties to a case.

Assistant District Attorney Katie Rayburn argued there is no conflict of interest.

She said Quinn never even met Roy and has never discussed the case with her or other prosecutors.

Prosecutors work for the people, not the district attorney, she said.

“We are here to represent the people,” she said.

Rayburn said a California case cited by Cataldo has no bearing on the Carter case. The California case involved a mother in the prosecutor’s office whose child was murdered. The mother was a witness in the case and had expressed her opinions on it to the office staff, Rayburn said.

The charges against Carter were brought after a grand jury deliberated on the case, she said.

Cataldo said once his motion is decided on and he knows for sure who the prosecutor will be he will file another motion to have the case dismissed.

He said there is no law in Massachusetts outlawing encouraging or assisting suicide. Prosecutors “overreached” by charging Carter with involuntary manslaughter, he said.

Roy had previously tried to commit suicide over a year earlier and was battling depression.

Several members of Roy’s family and Carter’s parents were in the small courtroom in New Bedford, but all declined to comment.