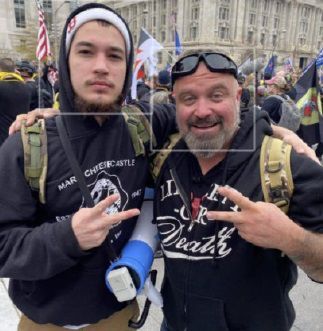 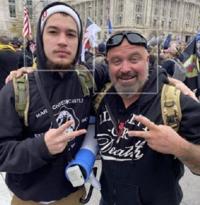 At left is a man identified by the FBI as Chase Kevin Allen outside the U.S. Capitol. The man at right is unidentified. 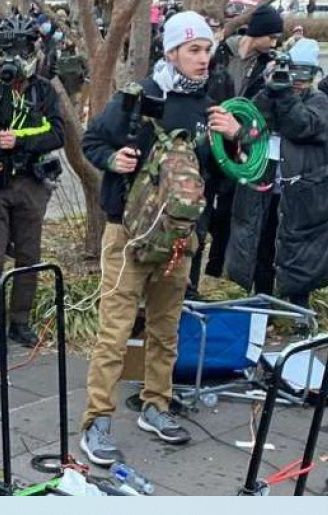 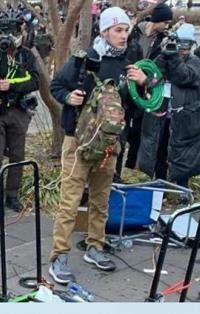 A man identified by the FBI as Chase Kevin Allen is shown at a media area outside the Capitol.

At left is a man identified by the FBI as Chase Kevin Allen outside the U.S. Capitol. The man at right is unidentified.

A man identified by the FBI as Chase Kevin Allen is shown at a media area outside the Capitol.

SEEKONK — The FBI arrested a man in Seekonk Wednesday for his alleged involvement in the riot at the U.S. Capitol in January.

Chase Kevin Allen, 25, formerly of Seekonk and now of Reno, Nev., was released conditionally after an initial appearance via video in U.S. District Court in Boston.

He was arrested without incident by the FBI in Seekonk on a federal warrant charging him with destruction or injury to buildings or property in special maritime and territorial jurisdiction as well as an act of physical violence on the Capitol grounds, the FBI said.

Allen was part of a group who were videotaped on the Capitol grounds at a media location “repeatedly stomping on media equipment” and “yelling at media members to leave the area in an apparent attempt to disrupt the media from continuing with live broadcasts of events at the U.S. Capitol that day and to express general disdain for the media,” according to an FBI affidavit.

Allen told law enforcement officials that he is a documentary filmmaker and drove to Washington, D.C. from Seekonk to film events, according to the affidavit.

“Allen heard the planned protests were going to be ‘big.’ He met up with another documentary group, led by an individual who hosts a radio show in Wisconsin,” the affidavit states.

Allen said he traveled with two associates and went to watch President Donald Trump speak but left after he could not get through the large crowd to film him, according to the affidavit.

He and his friends were eating lunch at a restaurant and left for the Capitol when they saw the riot on a news broadcast, according to the affidavit.

Allen said he went up the steps of the Capitol but denied going inside “because he was skeptical of the law enforcement officers who were just letting people walk in and out,” the affidavit says.

“Allen stated that he knows it is not normal to be able to walk into the Capitol, even during tours, so he was afraid that it might have been a trap that could result in his arrest,” it says.

Allen also denied damaging media equipment and told the FBI he tried to defuse others from attacking members of the media.

A tipster with a group called Sedition Hunters identified Allen through photos the FBI posted on its website.

The tipster told the FBI Allen “frequently does live streams as he goes into police stations and state houses to audit America,” according to the affidavit.

Allen told law enforcement officers that he maintains a YouTube channel and travels throughout the U.S. to film various events and then posts the videos.

A Somerville man was also arrested Wednesday by the FBI but was not associated with Allen.

The arrests bring to 10 the total number of people charged by the FBI Boston Division in connection with the Jan. 6 riot at the Capitol.

The FBI is the lead investigative agency but every case is being prosecuted by the U.S. Attorney’s Office for the District of Columbia. Following arrests, or surrender, defendants must appear before a district court magistrate/judge where the arrest takes place.

While Allen is the first person to be arrested in the area in connection with the riot, a former North Attleboro man’s wife was shot to death by a police officer during it.

Ashli Babbitt, 35, was among a mob of Trump supporters who tried to disrupt the certification of President Joe Biden’s election victory. A U.S. Capitol Police officer shot and killed her as she attempted to breach a set of doors in the Capitol.

Her husband, Aaron Babbitt, a North Attleboro native who now lives in San Diego, filed suit June 1, seeking the disclosure of records that were part of an investigation that determined the shooting was justified.

The FBI continues to seek the public’s assistance in identifying those who took part in the siege.

The public can view photos of individuals the FBI is looking for at www.fbi.gov/wanted/capitol-violence. If you have any information on the people pictured on the website, you are urged to call 1-800-CALL-FBI, or submit a tip online at tips.fbi.gov.

Seekonk man charged in Jan. 6 riot at US Capitol says he was only there to videotape protests

SEEKONK — Chase Allen was in Washington, D.C. during the Jan. 6 riot at the U.S. Capitol, but in a brief interview Thursday he said he was onl…