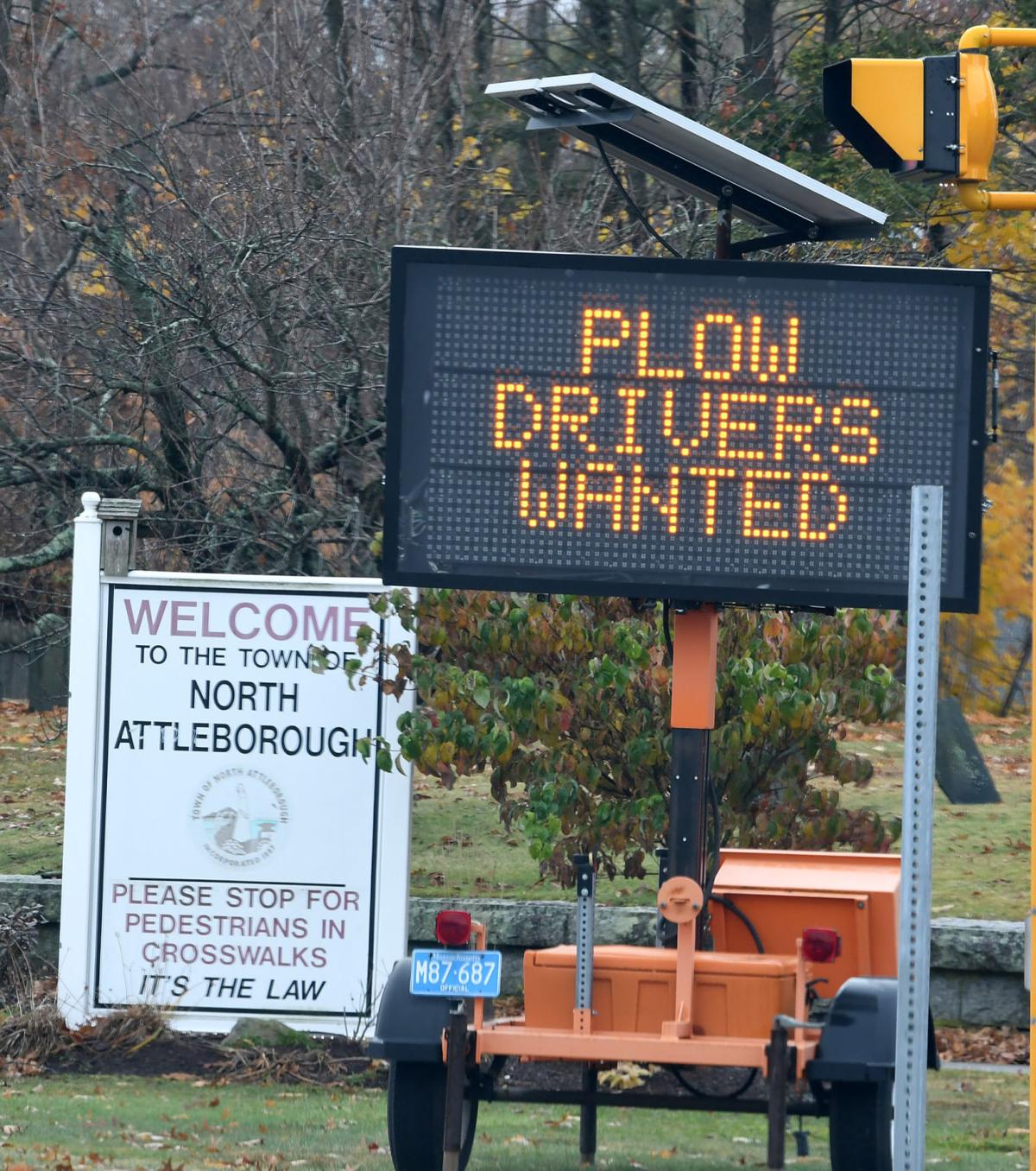 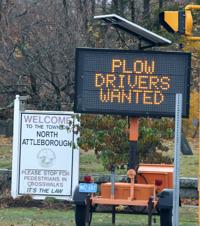 A sign in North Attleboro advertising for snowplow drivers. 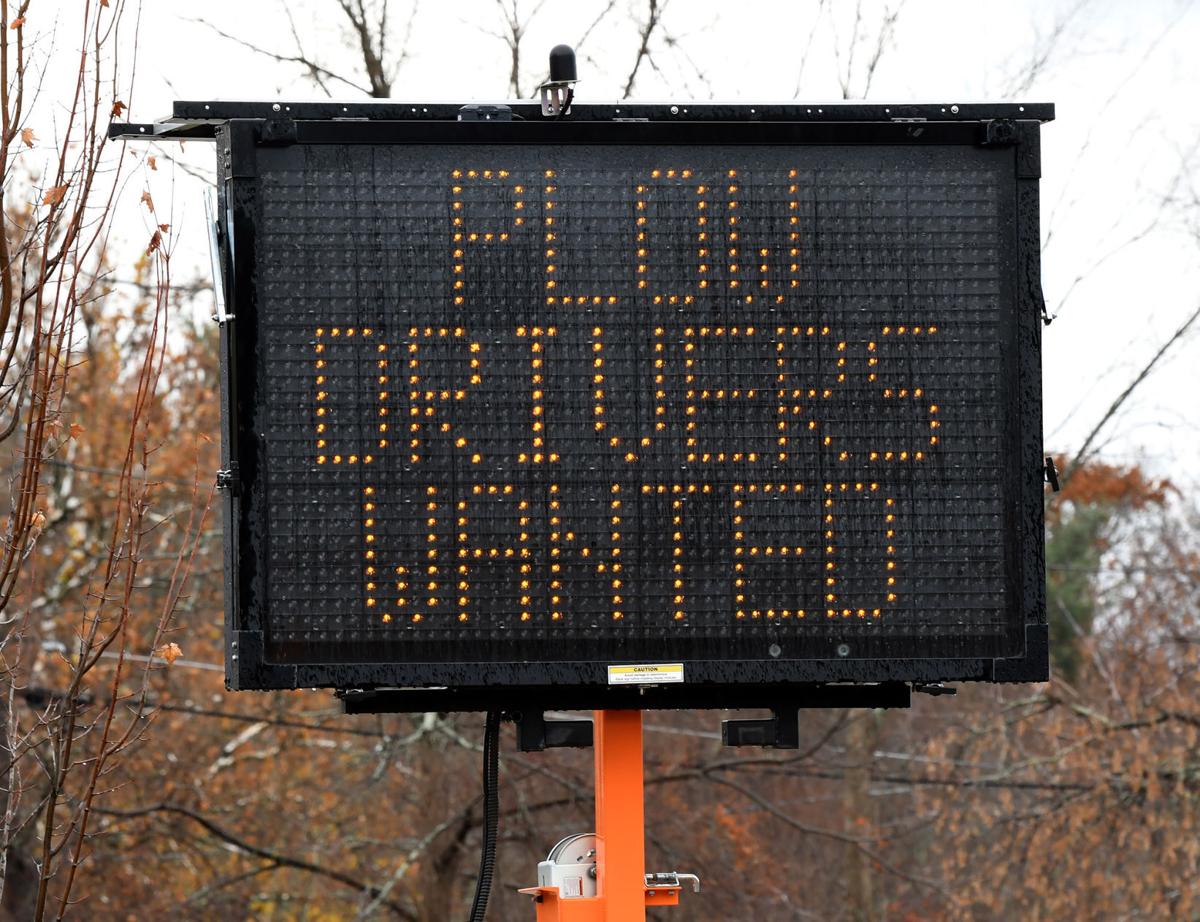 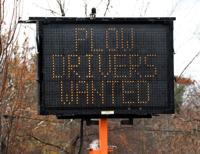 A sign in the center of Wrentham advertising for snowplow drivers.

A sign in North Attleboro advertising for snowplow drivers.

A sign in the center of Wrentham advertising for snowplow drivers.

Those signs popping up in Attleboro area communities pleading for snowplow drivers tell the story.

A shortage of workers in many fields, due partly to the pandemic, is also hitting the workforce that helps keep roads clear of snow and ice in the winter.

North Attleboro and Wrentham, among other communities, have set up portable digital signs seeking snowplow drivers.

Such signs have been popping up more frequently in recent years but this year the need is more acute, area public works officials say.

Several highway and public works departments have had to bump up pay for privately-contracted snowplow drivers who supplement municipal trucks and workers.

“There are only so many people in the pool of plow drivers/contractors, and every city and town is hiring from that group of contractors,” Bobby Araujo, Attleboro’s assistant public works superintendent, said.

“Every year we seem to lose a few contractors, either they sell their business or retire, and some just don’t want to do it any longer,” Araujo said.

Another challenge, he points out: More land is being developed in cities and towns, creating a lot more roads to be plowed and treated.

The city Department of Public Works increased its pay rates for private drivers this year.

“We’re always trying to think of different ideas or methods to make our city more attractive to the snow plowing contractors,” Araujo said.

There have also been concerns that costs of road-treating materials such as salt and de-icer would be increasing and/or be hard to obtain because of supply and demand issues for many products amid the pandemic.

“Believe it or not, those prices have not increased much in the past few years,” Araujo said.

“It is certainly more difficult to find drivers for plowing. Several of the larger companies have reported that while they have equipment to provide, they cannot find dedicated drivers,” Hollowell said. “I think that being a very challenging, sporadic and sometimes thankless job, workers are continuing to re-evaluate income over employment gratification.”

Then there is the rising fuel costs.

“The uncertain price futures of fuel may be dissuading independent plow drivers to come into the field,” Hollowell said.

The town’s public works board “increased rates quite a bit last year to attract more drivers,” he added.

North Attleboro usually has about 25 contracted trucks and is short four or five, Hollowell said.

“As always, we have our dedicated DPW staff who make up the bulk of our snow fighting forces with help from parks and school personnel, when available,” Hollowell said.

The price of road salt has increased from $45 a ton last year to $65 this year.

“While that is a stark increase, last year was more of an anomaly,” Hollowell said, as salt prices have run $55 to $65 in past years.

In Wrentham, Micheal Lavin, the director of the town’s public works department, said he is also crossing his fingers the sign advertising for more drivers actually brings them in.

“It has been difficult to both recruit and retain drivers,” Lavin said. “There are fewer drivers willing to take on this type of work. There are simply less people available in the pool to hire.

“On top of that, the cost of insurance is becoming prohibitive for smaller companies. Add fuel and wear and tear on their vehicles and it simply is no longer worth doing for drivers,” Lavin said. “They can make more money and work less hours simply doing residential driveways.”

The DPW and town has taken a number of other steps to attract drivers.

“We have raised rates every year for the last several years. We have initiated a guaranteed minimum,” Lavin said. “What we find is we are now competing with our surrounding communities to attract operators. Everyone is raising their rates and benefits to outpace their neighbors.”

Pay has been hiked 3% from last year in Wrentham.

“It is not even close enough to attract new people,” Lavin said.

Wrentham should have between 10 and 20 private drivers by now.

“We have five committed,” Lavin said. “However, the companies are not sure they will be able to hire drivers for two of their committed trucks.”

While public safety is always a concern and there will likely be longer waits to see back roads plowed, the roads will get cleared, officials assure residents.

It will cost taxpayers more, though, as more overtime pay will likely be needed for municipal drivers.

Lowell and Worcester are among the cities offering hourly rates of $155 per hour for drivers who use their own trucks.

Many states, including Massachusetts and Rhode Island, are facing the same obstacles as towns and cities and that is even before the snow starts.