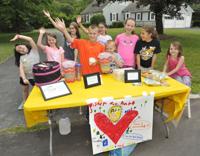 Luke Crovo, 10, and his brother Zach Crovo, 6, of North Attleboro organized a lemonade stand to raise money for the Sisters@Heart charity. The stand is at the corner of Reservoir Street and Edgewood Drive. 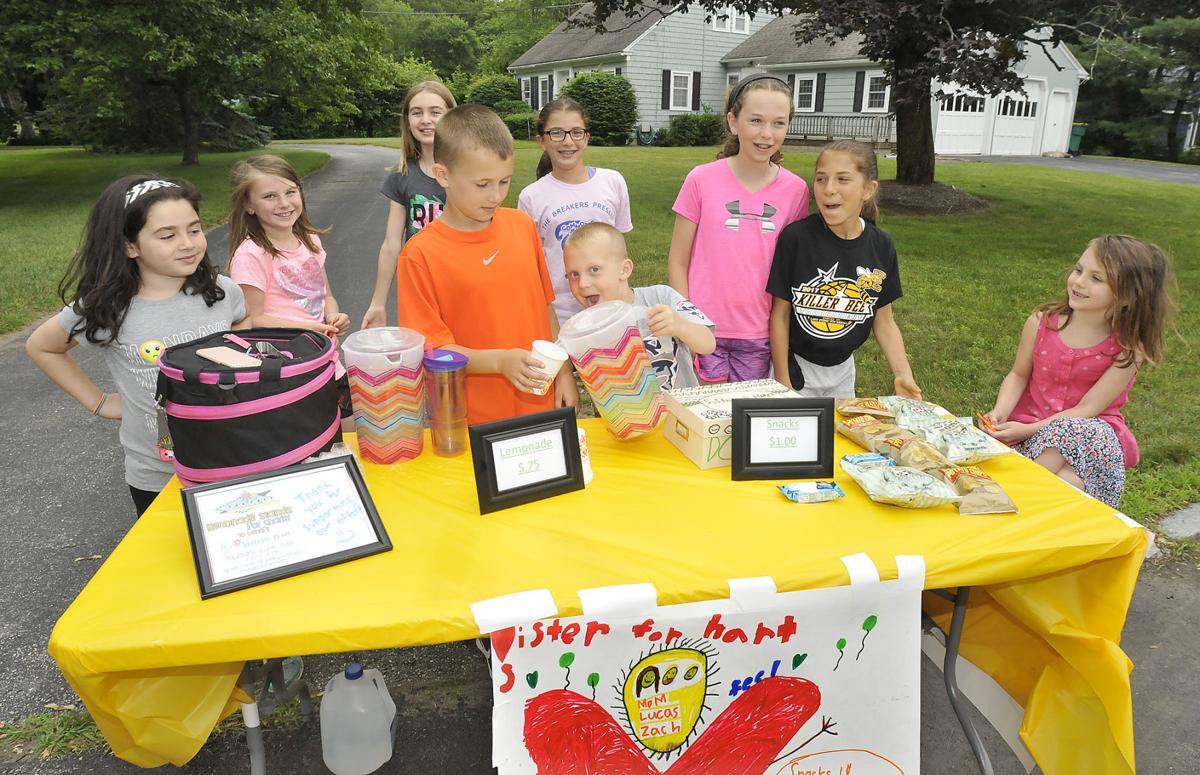 Luke Crovo, 10, left, and his brother Zach Crovo, 6, of North Attleboro organized a lemonade stand to raise money for the Sisters@Heart charity. To the right are friends who will be running a lemonade stand Friday and throughout the summer for charity.

Luke Crovo, 10, and his brother Zach Crovo, 6, of North Attleboro organized a lemonade stand to raise money for the Sisters@Heart charity. The stand is at the corner of Reservoir Street and Edgewood Drive.

Luke Crovo, 10, left, and his brother Zach Crovo, 6, of North Attleboro organized a lemonade stand to raise money for the Sisters@Heart charity. To the right are friends who will be running a lemonade stand Friday and throughout the summer for charity.

Lemonade mix, some water and a little bit of fun: A group of North Attleboro kids have figured out the perfect recipe for summer.

But add in a little bit of selflessness, and you have a drink the community can enjoy as well.

About 20 North Attleboro kids, from elementary school up to middle school, have committed their summers to fundraising for local charities through pop-up lemonade stands around town.

The first, at the corner of Edgewood Drive and Reservoir Street Thursday afternoon, was off to a good start just a half hour after it began, with organizer and 10-year-old Luke Crovo estimating 25 people had already stopped by for a 75-cent cup of cold lemonade or $1 snack.

Little brother Zach, 6, had them one higher: 26. Whatever the number, the kids, who call themselves the RAK Pack, are on their way toward a $1,000 goal set for the end of summer.

Erin Sweeney, president of a mom’s group in town known as M.O.K.I.E.S (Moms of Kids in Every School), said the RAK Pack grew out of the mom’s group as a way for parents to get their children involved in some good for the community.

The group, whose name stands for “random acts of kindness,” picks up trash around town and collects canned goods for Lenore’s Pantry, a food charity.

But last year the kids came up with an idea of their own: Lemonade stands for charity.

Their first year was a success, with each of eight lemonade stands collecting between $50 and $200, Sweeney said. In all, the group raised $700 to split among local charities, such as the animal shelter and World War I Park and Zoo.

“We’re trying to teach them the importance of giving to others and helping out in the community,” Sweeney said. “We talk about the charities and we go to the organizations and give them the money in person. Hopefully, if they get in that habit of giving back, it’ll translate to when they’re older.”

“You put the lemonade stuff, water and you mix it up real good,” the 6-year-old said.

Pink is his favorite.

“It’s fun and it keeps us busy,” Luke said. “It makes me feel good and happy. I learned that it’s important to donate to organizations that help people live their lives and survive.”

Another RAK Packer, Avery Powers, 8, said it’s important to “raise money for other people and not just ourselves. So other people can get food and nice things.”

Friday, the group will be back at it again at 304 Old Wood Road from 10:30 a.m. to 12:30 p.m., with proceeds benefiting the Meghan K. Duffy Foundation in support of families whose children are receiving treatment for cancer.

To keep track of the group and see where they’ll be next this summer, visit M.O.K.I.E.S on Facebook.

In life, there are people who cross our paths that will forever change the course of our thoughts and actions.