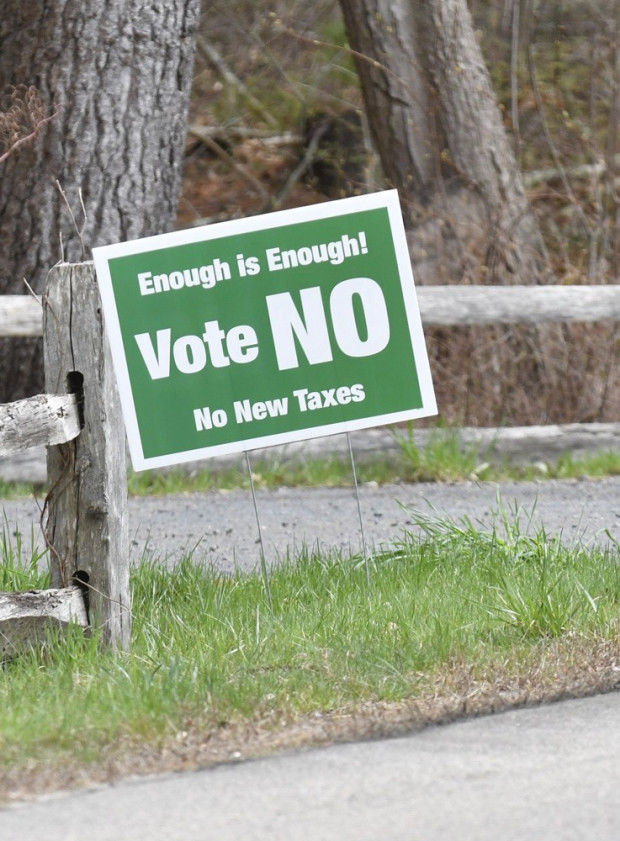 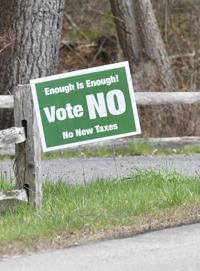 Signs, both for and against the override, can be found all over Norton. Voters decide Tuesday on the tax hike. 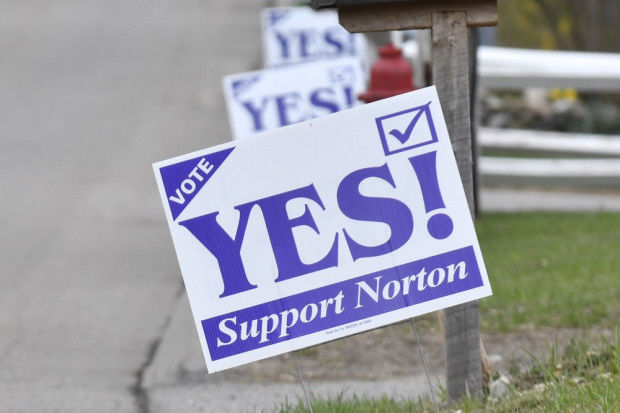 Signs, both for and against the override, can be found all over Norton. Voters decide Tuesday on the tax hike.

NORTON - For a second year in a row, signs calling for "yes" votes and "no" votes dot the landscape throughout town as residents head to the polls to decide a a multi-million dollar tax hike.

Turnout is expected to be heavy for the town's 12,898 registered voters.

"It's going to be a very volatile election," Selectmen Chairman Bob Kimball said. "We have to treat everyone with

respect. We all have to live together after."

The override sum would be split evenly between the schools and local government for the budget for the fiscal year starting July 1.

The $1.1 million for schools would provide full-day kindergarten, do away with school bus fees, reduce sports fees and fund several positions.

About half the town's $1.1 million would be used to reopen the Chartley Fire Station, with additional money earmarked for police and the library.

Local officials estimate the projected tax impact would be 98 cents on the tax rate, and the owner of a typical $324,000 home would pay $318 more in taxes.

Unlike a Proposition 2 1/2 debt exclusion that pays for building projects over the life of a bond, a budget override is a permanent tax hike.

Opponents contend residents are struggling now to pay their tax and utility bills, and maintain seniors on fixed incomes face losing their homes in the face of those bills and climbing medical, dental and food bills.

"This isn't seniors verses kids. This is coming together as a town as a whole to move the town forward," said Sheri Cohen, chairwoman of the recreation commission.

A leading opponent of the override, Ralph Stefanelli, a housing authority member, has criticized selectmen and school officials for returning with an override request less than a year after a $3.7 million override was rejected by nearly 200 votes last May.

The schools were earmarked for $3.1 million of that.

"We listened," Superintendent Joseph Baeta said of cutting the override amount down.

Full-day kindergarten would cost about $320,000, but $145,000 would be funded with money from participating in the school choice program that allows out-of-towners to send their children to local schools and have the cost picked up by their communities.

Full-day kindergarten that all but 32 school districts in the state have has been a longtime goal, Baeta said.

The schools would also get money from the override for several new positions - many of them that had been cut over the years, including a guidance director, literacy coordinator, two library media specialists, a digital learning specialist, and high school computer science teacher.

On the town side, besides the money for the fire station, $108,186 would go to the police department for various expenses, including an office for its problem oriented program and hiring another officer.

"We aren't ensuring the safety of residents. For me, this override is about the safety and welfare of residents," Selectwoman Mary Steele said, noting the town has major highways going through it, a college and gets the overflow traffic from the Xfinity Center in Mansfield.

"It divides our town," Steele acknowledged of the override. Approval, she said, "will set us forward."

The override money would also provide $100,000 to increase library hours, $50,000 for another highway/cemetery worker, $40,000 for a human resource person, nearly $22,000 for personnel at the Council on Aging, and about $15,000 each for hours for the town clerk's and recreation offices.

Hundreds of supporters and opponents of the override turned out to two forums on the measure in recent weeks.

"It has split our town immensely," said Brian Greco, a former local police officer running in the special selectmen election in June. "It is horrible to see it."

Some selectmen who had opposed the previous override back the latest attempt.

"It's a totally different override," said Selectman Brad Bramwell, a longtime former school committee member, adding of the first request, "I too voted to defeat it. I didn't think it was fiscally responsible for the entire town. This is a well-rounded financial picture that will take care of the town and not take care of one side of town."

Kimball agrees with Bramwell. "I didn't support the last two or three," Kimball said. "Sometimes you have to do what is in the best interests of the general public."

If the new override fails, a balanced budget will be proposed at the May 8 town meeting.

STEPHEN PETERSON can be reached at 508-236-0377 or at speterson@thesunchronicle.com.

Norton to vote on override

NORTON — Voters Tuesday head to the polls to decide on a $2.2 million tax hike but also to elect residents to several town positions in the an…