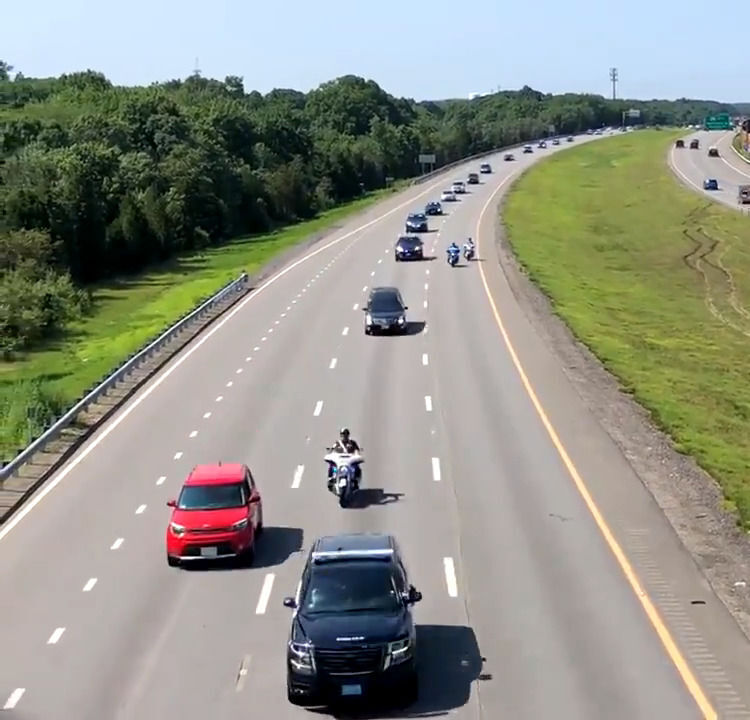 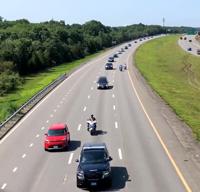 An image from a video posted by the Attleboro Police shows an escort of the body of Norton Deputy Police Chief Tommy Petersen from Rhode Island Hospital to the Norton Funeral Home with a pass-by of the town's police station where he served for more than three decades. Petersen died Tuesday.

NORTON — Whenever there was an emergency or crisis requiring a large-scale police response, Tommy Petersen wanted to be in the thick of it.

“He loved being a police officer and he loved serving his community,” Police Chief Brian Clark said Wednesday, referring to Petersen as his “right hand” man.

Petersen, 51, a 33-year veteran of the department and the town’s first deputy police chief, died Tuesday at Rhode Island Hospital in Providence from complications of a stomach ailment, according to the chief.

He went to Sturdy Memorial Hospital in Attleboro complaining of stomach pains on Saturday and was transferred to Rhode Island Hospital on Sunday, Clark said.

His death came exactly six months after Detective Sgt. Stephen Desfosses, 52, died from COVID-19, leaving the town and the police department once again mourning the passing of one their top cops and public servants.

The chief added that the two men represented 60 years of institutional knowledge and have colleagues on the department with whom they grew up and went to school.

Clark said he could always rely on Petersen to coordinate any police response to large emergencies. Petersen had the skill and knowledge, Clark said, and always wanted to be involved.

Petersen started out as police dispatcher and rose through the ranks to become the town’s first deputy police chief last year, working in all aspects of the department.

In addition, he worked with police officers throughout the region through the Northern Bristol County Drug Task Force and the Metropolitan Law Enforcement Council, a regional agency made up of over 40 police departments and sheriff’s offices.

Petersen was commander of the Metro-LEC’s Investigative Support Unit, which handles searches for missing persons, the apprehension of violent fugitives, hostage situations and crowd control all over the region.

Expressions of sympathy for the department and Petersen’s family came from not only police in the area but also departments such as Westwood and Brookline.

“I worked closely with him on several regional units and he was a caring and dedicated professional,” Canton Police Chief Ken Berkowitz, a member of the Metro-LEC executive board, said in a tweet.

Besides being a police officer, Clark said Petersen was a devoted father to his sons Matt and Nick, both in their 20s, and husband to his wife Michelle.

He coached his sons in various sports when they were younger and was one of the football coaches for several years at Norton High School, where he also played football.

Football coach Jim Artz said Petersen showed great interest in the players and their families. He recalled Petersen once going to see a player after he was injured in a scrimmage “just to check up on him.”

“He was a pleasant guy with the kids,” Artz said, adding that Petersen wanted to continue coaching but could not spare the time after he became deputy police chief.

“I can’t say enough about him,” Artz said.

Petersen, who had a master’s degree in criminal justice, also loved to teach other officers through the Massachusetts Police Training Committee, Clark said.

“He loved his role as teacher and mentor,” the chief said.

There was a police escort of Petersen's remains Thursday morning from Rhode Island Hospital to the Norton Memorial Funeral Home via Interstate 95 North, Interstate 495 South and Route 123 past the town police station, according to a police post.

A wake for Petersen will be held from 5 p.m. to 9 p.m. Monday at Saint Mary’s Church. A law enforcement walk through will be held at 4:30 p.m.

The funeral will be Tuesday at St. Mary’s Church on West Main Street.

Following the Mass at 11 a.m., he will be buried with police honors at the Norton Common Cemetery near the church.