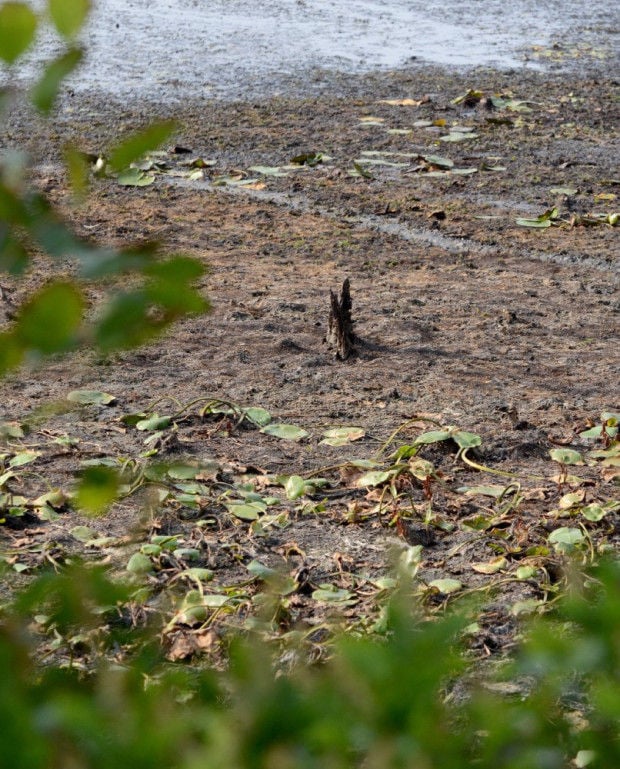 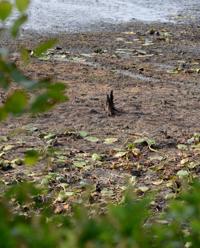 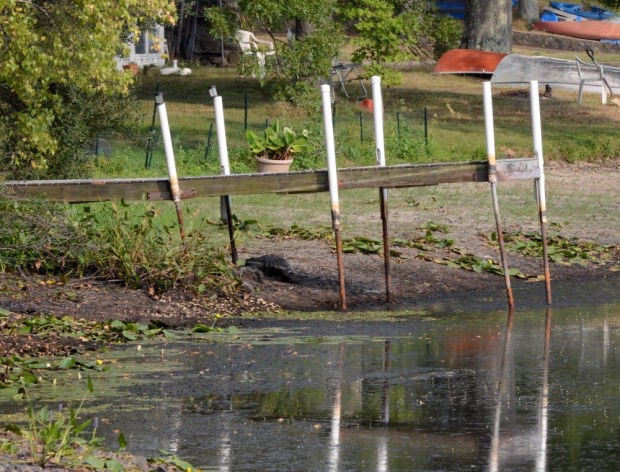 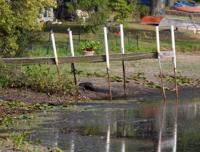 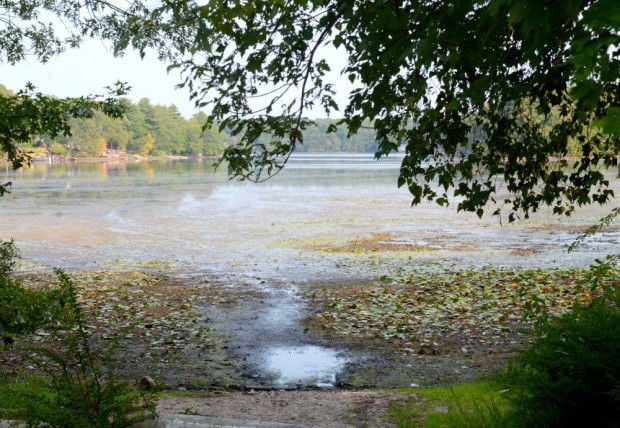 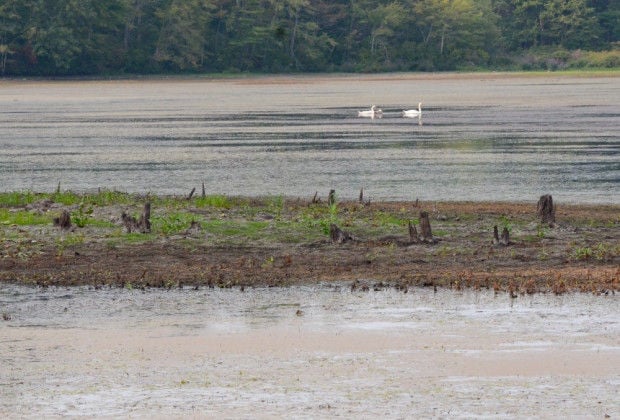 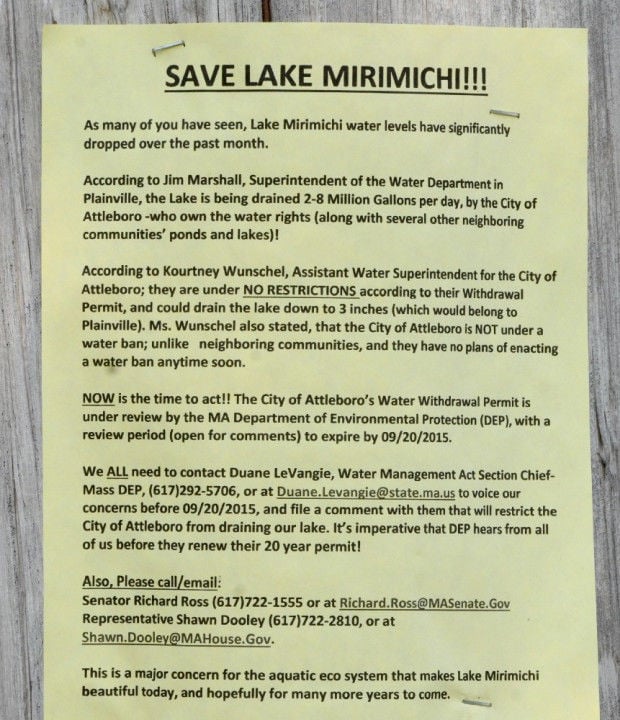 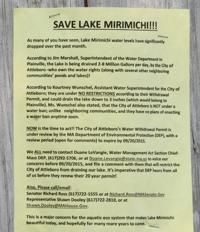 Receding water in Plainville's Lake Mirimichi is raising concern among waterfront property owners, who have called for a protest of Attleboro's use of the lake for drinking water.

The move comes as the state Department of Environmental Protection mulls renewal of the city's 20-year water withdrawal permit.

A leaflet in circulation exhorts residents to "Save Lake Mirimichi" as water drains away from the lake's shallower shores following one of the driest Augusts in memory, leaving some docks forlornly planted in mud flats instead of a lapping blue lake.

The unsigned leaflet criticizes Attleboro, which acquired water rights to the lake for drinking water in 1925, for not imposing a water ban as other municipalities have.

The person or persons who authored the leaflet also allege the city is sucking up to 8 million gallons a day from the 170-acre lake, which the Department of Environmental Protection estimates to hold as much as 330 million gallons.

It also suggests Attleboro could, if it wanted, "drain" the pond, resulting in ecological damage.

Another person who emailed The Sun Chronicle said the city should institute water restrictions to prevent "frivolous" activities, such as lawn watering and car washing, to leave more water in the lake, presumably for boating, swimming and other recreational uses.

But Attleboro officials believe that the hot, dry weather in August has far more to do with a lower lake level than anything the city has or has not done.

Assistant Water Superintendent Kourtney Wunschel said a severe lack of rain, rather than the city's withdrawals for drinking water, is to blame for the condition of Mirimichi.

In fact, the city is using no more water than usual - and on some days, less. Still, water used by the city is not being replaced at the usual rate because of the unusually arid summer.

According to water department rainfall records, last month was the 109th driest August in the 115 years the department has kept records.

Meanwhile, all of Southeastern Massachusetts has been designated as "abnormally dry" as of Sept. 1 on the federal government's drought.gov website.

At the end of August, the city was drawing about 960,000 gallons of water per day from its Wading River plant in Mansfield, which processes water from Mirimichi and other sources, such as Crocker Pond in Foxboro.

That amount, which is close to the typical amount for for daily withdrawals, equals about one-sixth of the city's total average daily use during summer. Daily use during the summer can jump up to as much as 6.75 million gallons from all the city's sources, with the greatest volume by far coming through the West Street plant in Attleboro, which draws from the Manchester Reservoir system.

At times, the city has used as much as 1.4 million gallons a day in August from Wading River, as it did in 2012.

But usually the daily draw is about 1 million gallons, Wunschel said.

The allegation that the city takes as much as 8 million gallons a day from the lake is not only untrue, but far beyond the plant's capacity, she said.

"It's actually impossible to process that much water through the (Wading River plant)," she said.

It's also untrue that the city plans to drain the pond, she said.

In addition, Wading River is limited by law to a daily withdrawal of 2.09 million gallons a day.

Of the 2.09 million gallons the city is allowed to take, 1.67 million gallons is a permanent daily withdrawal limit. It's called the "registration" amount, and is linked to the city's ownership of Mirimichi water rights.

When the city acquired those rights in 1925, it dammed Mirimichi, which was then a pond, to make it a lake and a larger source of water, DEP officials said.

The remaining withdrawal amount, 420,000 gallons a day, is governed by the DEP's permitting process and is an amount that could increase or decrease according to information received during the ongoing permit renewal process, DEP officials said.

A new permit for the city is expected to be issued by DEP in February 2017.

While the city can take as much as 2.09 million gallons a day from the lake, it has rarely done so - and is not doing so now, Wunschel said.

It's sticking to about 1 million gallons, which was the amount measured on Sept. 3.

The rest of the city's water comes from other sources and is processed at its main plant on West Street in Attleboro. That water comes through the Manchester Reservoir system, which is also drying out in places.

"We don't change the flow (at Wading River) that much. If we need more water, it comes from the main plant," she said. "We're putting a lot more water through the Attleboro plant."

The additional 400,000 gallons a day is all coming from the West Street plant, Wunschel said.

The average August use over the past 10 years is about 5.5 million gallons a day.

The uptick this August is unusual because June and July are typically the months in which the most water is used, she said.

The abnormality has continued into September.

Nonetheless, Mirimichi - where the deepest basins reach about 20 feet, and the shallowest, about 5 feet - has receded considerably in some places.

At of the end of August, Mirimichi's level had dropped about 23 inches below "spill level" of the dam. Spill level is the point at which the lake is considered full, and water is flowing naturally into the Wading River.

Wunschel said 23 inches below spill level is much lower than usual, but far from the lowest it has ever been.

Several Augusts in the 1990s registered similar levels - and a few registered even more.

The greatest August drop in the past 22 years came in 1993, when it was 43 inches below spill level.

While some people are worried about ecological damage, the lake recovered from each of those episodes.

"When we get a significant rainfall, it will refill and restore itself," she said. "I don't think (the dry conditions) will have any impact on it, at all. It's Mother Nature."

Some fish will die. But most, along with other aquatic creatures, follow the water, she said.

And in some instances, a lack of water in ponds or shallow lakes can actually help the ecosystem by getting rid of poisonous algae blooms caused by invasive species, Martin said.

The lack of water kills the invasive species and gets rid of the algae, which sucks oxygen out of the water, causing fish and other wildlife to die, she said. A healthier ecosystem can result.

Bigger dangers for lakes and ponds stem from permanent changes in the local hydrological system that come from construction or other permanent changes, which eliminates water sources for the pond and its wildlife, Martin said.

Mayor Kevin Dumas said part of the furor over the lake level might be due to the fact that no water was drawn from Mirimichi in more than a year because the Wading River plant was shut down to repair its filter beds.

A full, or almost full, lake for most of the past two summers has made the contrast between then and now more stark and alarming, he said.

But, Dumas said less water use from Mirimichi is on the horizon because the city has repaired holes in an impounding area known as Blake's Pond, which will stop water waste.

While the city was criticized for not enacting water restrictions, Dumas said they were not needed based on the availability of water in the city's system, including Mirimichi.

But, without precipitation, that could change, he said.

"If it doesn't begin to rain soon, that might be a different story," he said.

However, there might be some good news on that front, according to the National Weather Service in Taunton.

I thought Mirimichi was mainly in Foxboro. That aside...Manchester Resevoir is as (or more) full as I've seen it this time of year. Why is Attleboro sucking water 3 towns over?
Just a thought.

As the article states, Attleboro gained rights to this water in 1925. At that time there were not even permanent homes around this pond - just seasonal "camps". Attleboro built the hyrodamn and dredged out the pond. Everyone who built/moved there over the last ninety years did so with knowledge of this situation. Folks should be happy they are even allowed on this body of water. Could be like Hoppin Hill Reservoir, Manchester, or Diamond Hill Reservoir which are strictly off limits.