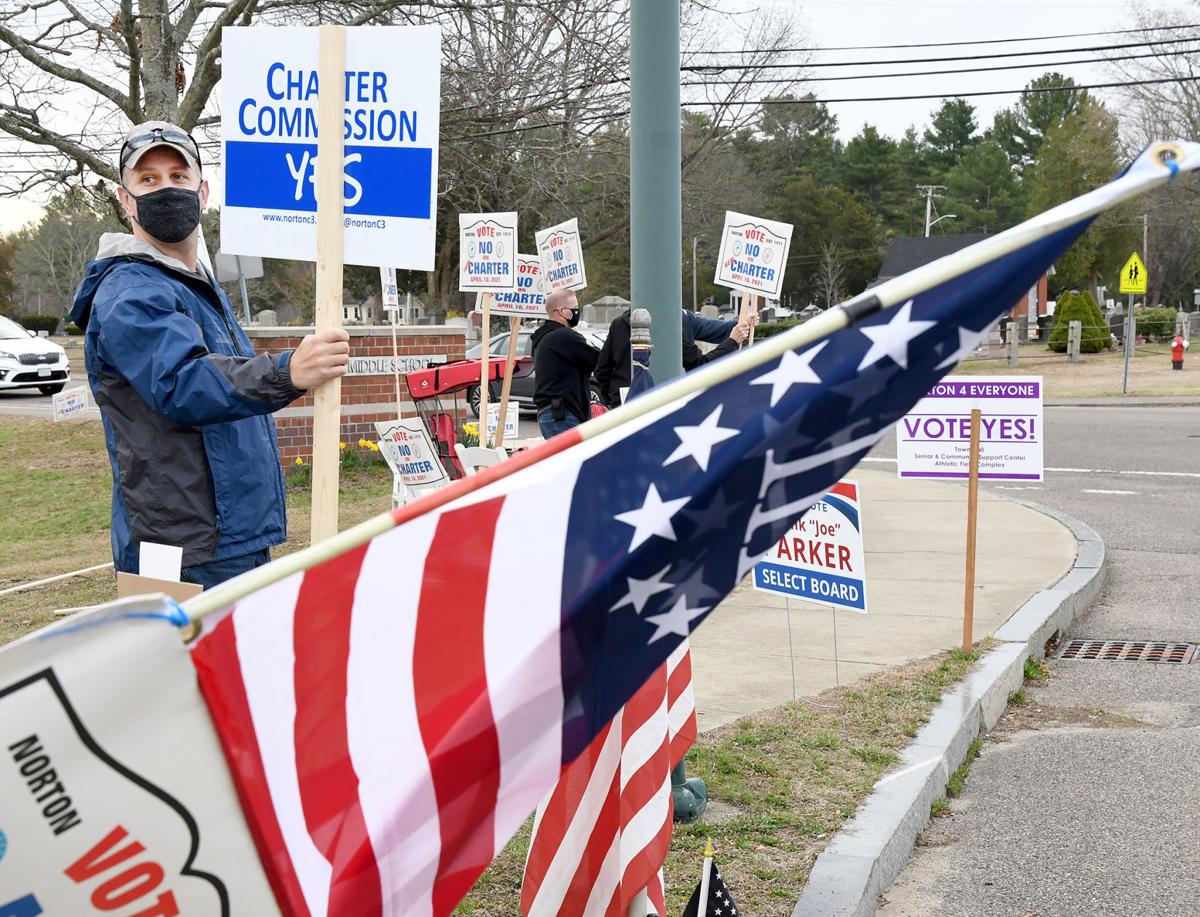 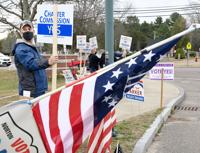 Many residents, including Dave Heaney, campaigned outside Norton Middle School Saturday as voters in the annual town election approved a $41 million Proposition 2 1/2 debt exclusion for a new town hall, senior/community support center, and athletic complex but opposed a new charter that would have abolished town meeting and the select board in favor of a town council. 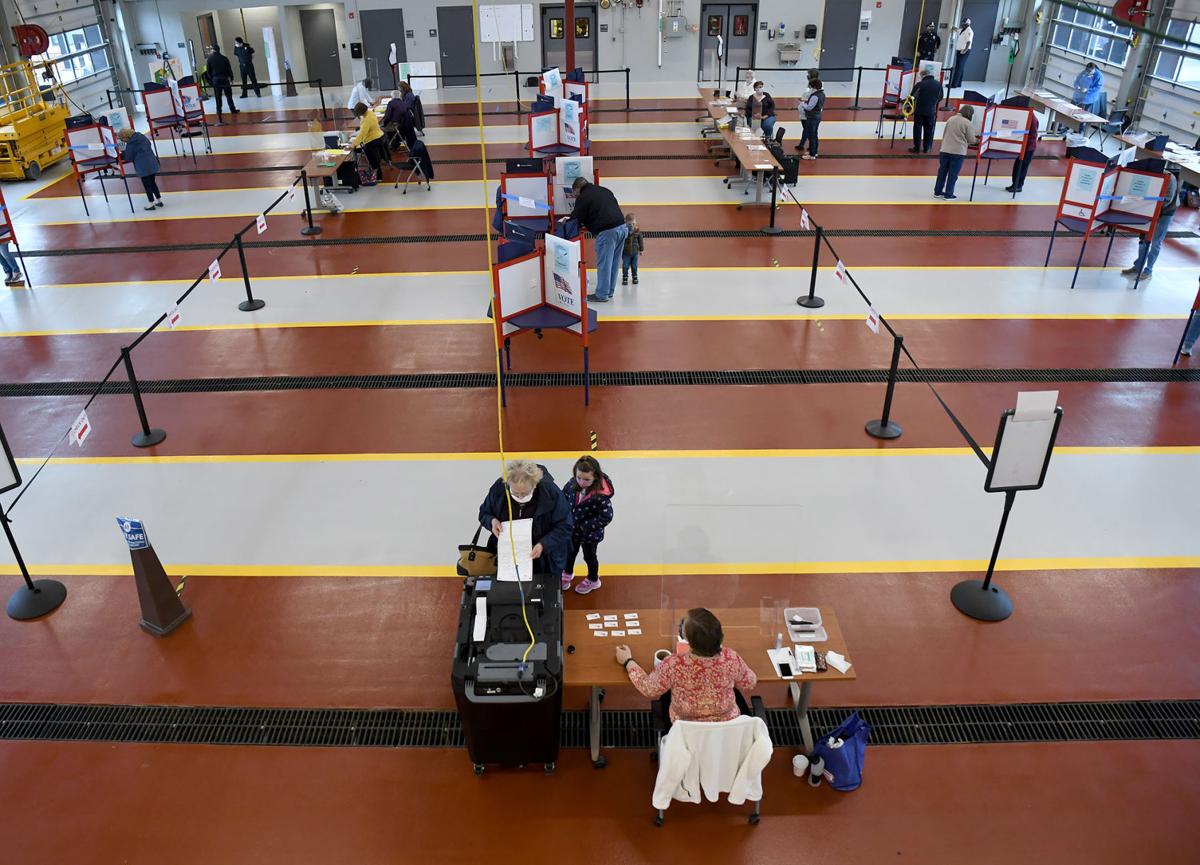 Turnout at the Plainville public safety building was slow for an election in April.

Many residents, including Dave Heaney, campaigned outside Norton Middle School Saturday as voters in the annual town election approved a $41 million Proposition 2 1/2 debt exclusion for a new town hall, senior/community support center, and athletic complex but opposed a new charter that would have abolished town meeting and the select board in favor of a town council.

Turnout at the Plainville public safety building was slow for an election in April.

Low voter turnouts have been widely lamented in the area and across the country, but what has been a surprise to many is voters not showing up even when major tax hikes are at stake.

In Plainville, at the April annual town election, voters for the second consecutive year overwhelmingly rejected a budget override of Proposition 2 1/2, the state tax levy limiting law. The request was for just under $2 million.

While the outcomes of those decisions have a direct impact on residents’ wallets, only one in five voters went to the polls.

The election ballot question that passed raises taxes by about $300 a year for an average valued $450,000 home to pay off a 30-year bond for the three building projects. A second ballot question, to do away with town meeting through a charter change, wasn’t approved.

The building projects narrowly passed in the election but were easily approved at town meeting, with only about a dozen dissenters.

So why don’t more residents bother to vote even when their tax dollars are on the line?

Norton select board member Michael Toole pins some of the blame on the pandemic.

“In my opinion, this (turnout) was super low especially as the town election had a competitive select board race, the charter question, and debt exclusion,” Toole said, adding that it was very close to the voter total for a 2017 election that featured a failed budget override. “I do believe COVID played a role in low turnouts.

“However, from my observation compared to other issue elections, this year’s town election had more town communications, mailers, public hearing info sessions, and social media posts than ever before. While some might think this would promote election turnout, it may also answer questions and put residents at ease on many of these decisions. “

Toole added he also believes there was some “federal election hangover” from the very contentious 2020 presidential election, for which Norton had a 10,000-voter turnout.

“I can try to speculate why turnouts are lower than we all expected on big town issues, but I truly don’t know,” Toole said. “All I/we can do is inform residents and provide as much information as possible so they can make an informed decision on these important issues.”

“I have no idea why the turnout was low. I wish I knew,” Longhurst said.

Over in Plainville, the situation was similar.

The proposed $1.95 million budget override was projected to increase property taxes less than $115 per quarter of the fiscal year starting July 1 for the owner of an average, $401,000 single-family home.

“People in town were very vocal about their positions during our last override attempt and it seemed to create great division. This attempt was meant to be a compromise, where all departments were able to bring back just what was most necessary,” select board Chair Brian Kelly said. “The proposed amount was far less and did not generate the strong emotions the last attempt did. Perhaps that resulted in the lower turnout.”

“I didn’t know what to expect for a turnout for the April 2021 election because there wasn’t a lot of talk going on or interest in absentee ballots,” Robertson said, noting absentee ballot requests will usually foretell turnout.

The previous budget override election was in June 2020 and requested $3.25 million from voters. The turnout was nearly 37 percent, or about 1,000 more voters.

Both override elections led to substantial reductions in town and school departments and numerous layoffs.

“It’s hard to say why the turnout was only 22 percent,” Robertson said of the second override vote. “We had information on our website about the override with multiple meetings to try to get the information out to the public.”

Kelly mentioned that as well.

“One of the most frustrating things about our current situation is that despite all of our attempts at trying to provide voters with information on options that could lead to a restoration in service levels, it seems as though we have no direct channels to be sure everyone is in the loop,” he said.

Brad Bishop, a political science professor at Wheaton College in Norton who has expertise with American politics, parties and elections, said turnout in elections is “definitely affected by timing,”

He pointed out the highest turnout is seen in presidential elections where 60% to 65% vote, with mid-term elections getting around 40 percent.

“Elections held at times other than the first Tuesday after the first Monday in November have always attracted fewer voters,” he said. “It’s not uncommon for spring elections that fill seats on local governing bodies to see turnout at 10 percent or even lower than that, depending on the state.”

Comparing across communities, demographics are predictive of turnout, Bishop said.

“Municipalities with a higher proportion of citizens holding four-year degrees tend to see elevated turnout. The same effects are seen for other socioeconomic variables such as household income,” he said.

The original justification for holding state and local elections in off years or during a different part of the calendar year was to prevent national-level politics from affecting voting in other levels of government, the professor explained.

“The decision to hold local elections in the spring for many communities has roots in the Progressive Era, as many people at that time were worried about pervasive corruption in local governments,” Bishop said. “Many thought that holding elections at a different time of year would prevent national-level political matters from impacting local controversies, in effect shining more of a spotlight on local contests.

“The problem with this system is that voter attention to local politics is on the wane, particularly in our current era of polarized and conflictual national politics,” Bishop added. “The lower turnout that we observe in local elections raises hard questions about the degree to which the spring electorate is truly representative of the community.”