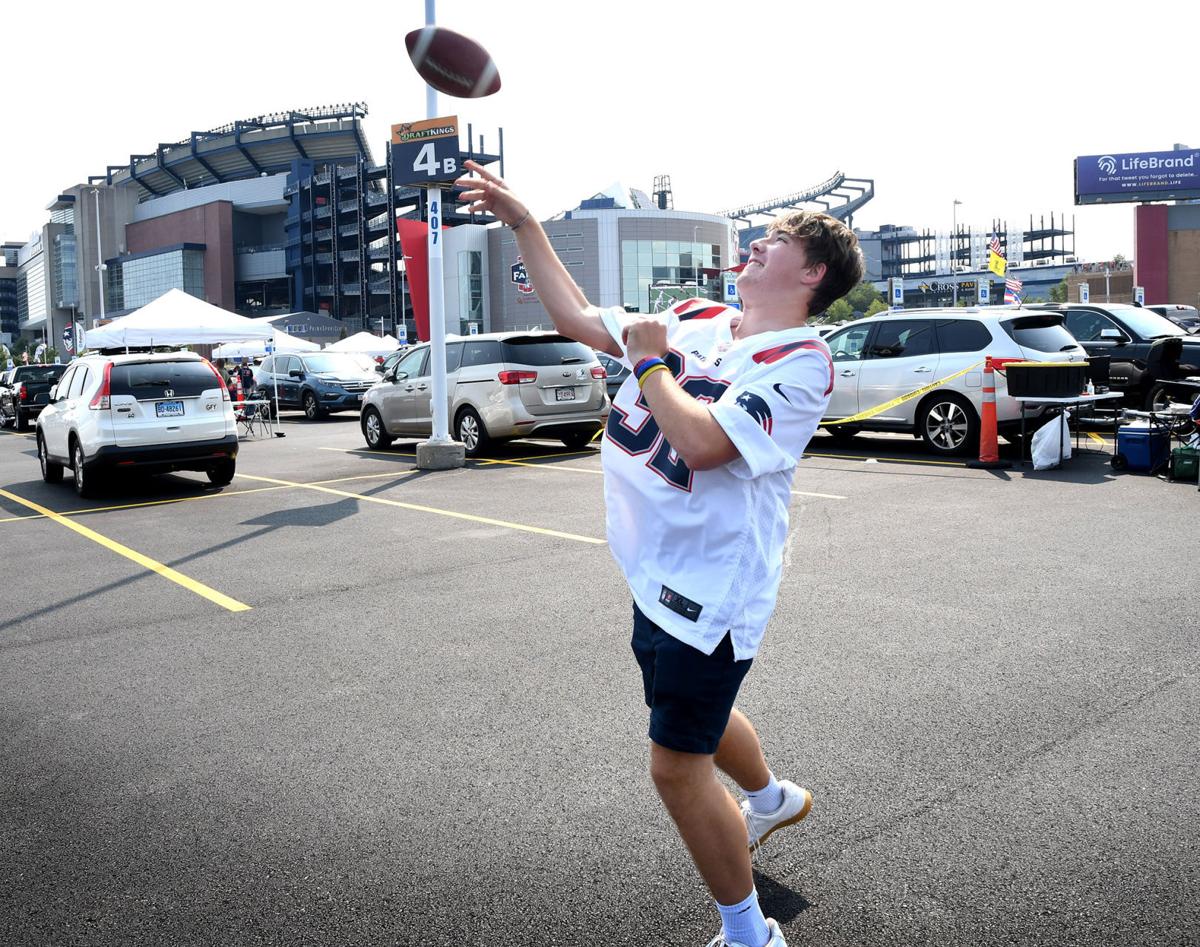 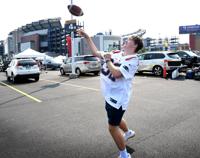 Brody Belanger of Brunswick, Maine, plays catch in the parking lot of Gillette Stadium while tailgating. 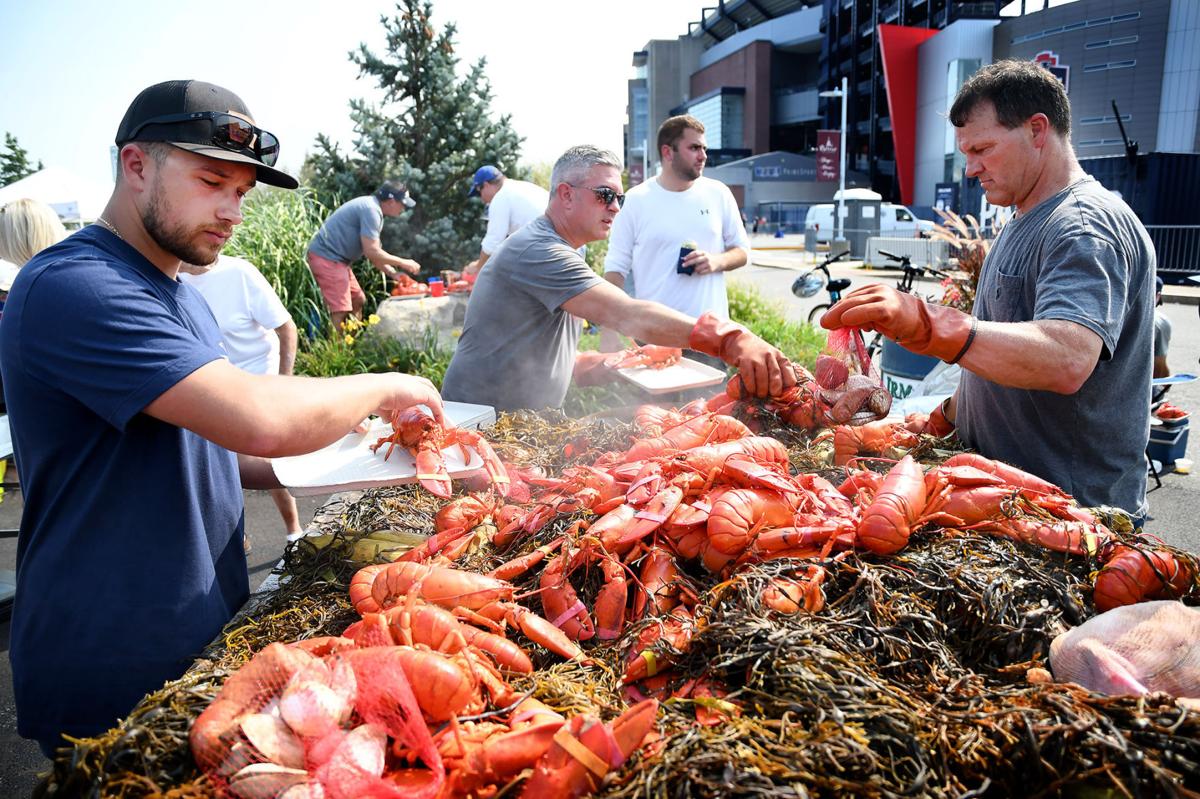 Maine lobster fisherman Al Stone, right, sets up and oversees a clambake tailgating party on the first New England Patriots game at Gillette Stadium season. Stone, from Scarboro, along with a couple of friends, including Alex Daniell, left, and his father Bill Daniell, steam 160 lobsters for friends and guests at his tailgating party.

Brody Belanger of Brunswick, Maine, plays catch in the parking lot of Gillette Stadium while tailgating.

Maine lobster fisherman Al Stone, right, sets up and oversees a clambake tailgating party on the first New England Patriots game at Gillette Stadium season. Stone, from Scarboro, along with a couple of friends, including Alex Daniell, left, and his father Bill Daniell, steam 160 lobsters for friends and guests at his tailgating party.

All throughout Gillette Stadium Sunday afternoon, fans could be seen wearing New England Patriots jerseys — including numbers 12 and 87 for former Patriots players Tom Brady and Rob Gronkowski, both of whom are now playing for the Tampa Bay Buccaneers.

One jersey that was not being donned by many of those in attendance at the Patriots versus Miami Dolphins game was that of starting quarterback Mac Jones, number 10. It was not, however, for lack of interest in the 23-year-old rookie who played at the University of Alabama before being drafted by the Patriots.

“I tried — believe me, I tried,” said 28-year-old Kingstown, R.I., resident Kevin O’Connor, who was tailgating before the game with his brother-in-law in one of the stadium parking lots. “The guy in the pro shop told me they sold out the day after it was announced that they let [former quarterback] Cam Newton go. There was nothing in the pro shop that gave a nod to Jones — at least not that I could find.”

And while some fans are still smarting about Brady’s March 2020 departure, most seem eager to start a new NFL season with a young play caller at the helm.

“For some, it’s opening day. For me, it’s ‘Mac Jones Day,’” said Norwood resident Joe Gareri, 25, a security officer at the Perkins School for the Blind in Watertown. “He would have won the Heisman Trophy if [former fellow Alabama teammate and wide receive Jaylen Waddle] had been healthy the entire season.”

His friend, Jared Ramos, 25, an engineer from Quincy, said that while he expects a good season for the Patriots with Jones as quarterback, he doesn’t expect perfection — and predicted an 11-6 record.

“I don’t have high expectations right now. Even though the AFC East isn’t a good division — except for Miami, New England and Buffalo — the Patriots need to upgrade their wide receivers,” said Ramos, who has been on the season ticket wait list for three years. “In the next few years, we’ll probably see a winning team.”

North Attleboro resident Mark De Chambeau, 60, said that while Jones is a “kid,” his training at Alabama under a coach with a similar style to that of Belichick’s is a “definite plus.”

“He’s got the skills,” said De Chambeau, a realtor. “We just need to give him a couple of years to mature.”

When asked if he thinks Jones can fill Brady’s shoes, De Chambeau said: “It would be hard for Jesus to fill Tom Brady’s shoes.”

Gareri said that Patriots fans who grew up with Brady as the Patriots quarterback were fortunate in that they “know nothing but Super Bowls.”

“Twenty years ago we watched a dynasty begin. Cam [Newton] was a filler, and here comes a new dynasty,” he predicted. “I think they’ll make the playoffs this year, but not [make it to] the Super Bowl.”

Predictions aside, Patriots fans tailgating before Sunday’s game said they were just happy to be back together celebrating the game they love. Sunday’s matchup was the first regular season game since the Patriots lost a playoff game against the Tennessee Titans in January 2020.

Return to stadium worth the risk for fans