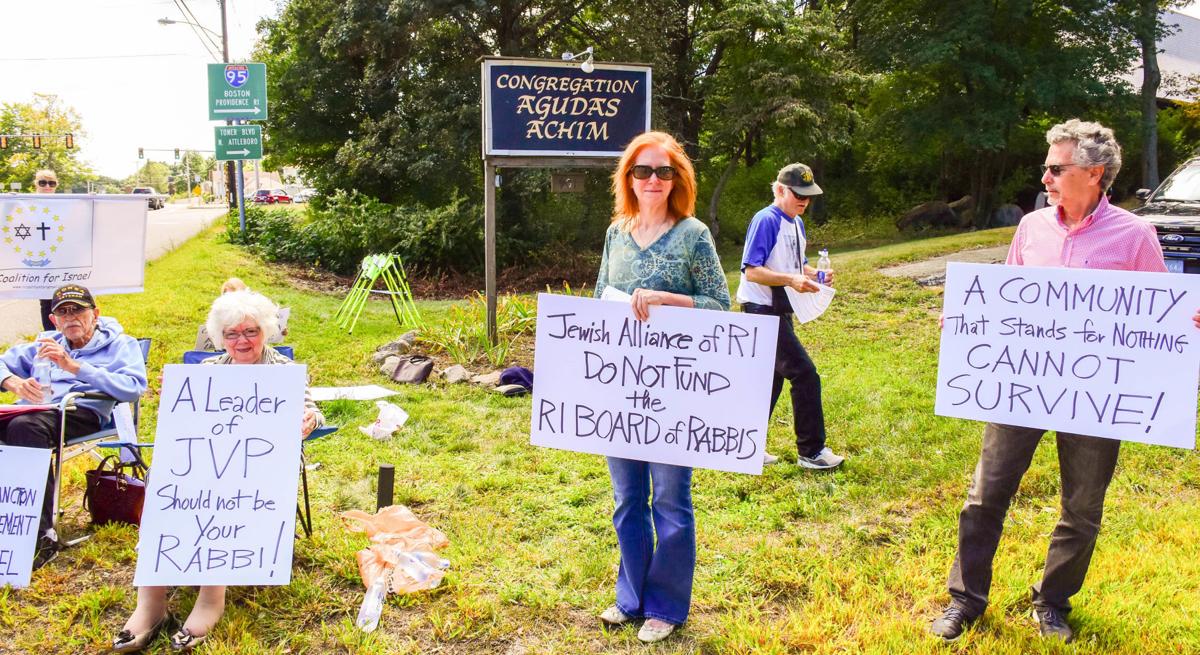 Protesters hold signs outside of Agudas Achim on Sunday.

People attending an open house at Agudas Achim in Attleboro on Sunday passed by protestors in front of the synagogue.

Protesters hold signs outside of Agudas Achim on Sunday.

People attending an open house at Agudas Achim in Attleboro on Sunday passed by protestors in front of the synagogue.

ATTLEBORO — Visitors arriving for an open house at a city synagogue Sunday were greeted by a group of protesters demonstrating against an organization to which the rabbi belongs.

But members of the North Main Street congregation didn’t pay it any attention and festivities of the open house complete with a cookout and live band continued uninterrupted.

About a dozen members of the Rhode Island Coalition for Israel holding protest signs greeted members and prospective members of Congregation Agudas Achim as they arrived for the synagogue’s annual open house which coincides with the start of the Jewish new year.

Linda Kaufman of Sharon a member of the RI Coalition for Israel, said the protest was because they say Agudas Achim’s Rabbi Leora Abelson belongs to the Rabbinic Council of Jewish Voice for Peace. Kaufman asked “What rabbi would belong to a group like that?”

Members of RI Coalition claim the Rabbinic Council of Jewish Voice for Peace is anti-Israel because it won’t denounce the BDS movement which calls on companies, institutions and individuals to divest, boycott and sanction Israel to negotiate and then work to create a two-state solution with the Palestinians.

Anti-BDS followers claim that those that don’t denounce the BDS movement are in favor of Israel’s destruction.

Tina Kasimer of Sharon and a member of the RI Coalition suggested that the Jewish Voice for Peace should denounce Hamas a terrorist group, which she claims it won’t, and stop supporting the BDS movement.

Michael Mellion of Sharon said BDS is all about the destruction of Israel.

The group said they timed their protest to coincide with synagogue’s open house. They also said their board of directors has four Jewish and three Evangelical Christian members.

The protesters peacefully gathered at the entrance of the North Main Street synagogue while a party was taking place in the rear of the building. More than 50 people, many returning congregants, and some prospective new members mingled enjoying the live band and cookout.

Children played with a bat and ball, while others drew with chalk.

A few people talked about the protesters, but most people tended to catch up on summer activities, choir practice and each other’s families.

She said Rabbi Abelson is a part-time rabbi and belongs to and is active in many groups and organizations.

Mandell said Israel is fraught with just as many diverse member communities and opinions as exist in the United States, and like every true democracy, both Israel and Agudas Achim entertain lots of discussion and opinion.

She gave examples such as the rabbis of the Talmud sitting around for hours arguing over a single word in the Bible.

Mandell recalled a story often retold by many Jewish parents of two Jews on a deserted island. Each person went to their own synagogue, but, when they wanted a meeting, they had to build a third, so they had a place they could agree on.

Thach anh hong is the stone was a lot of interest, today Gemstone An An would discuss the issue: quartz have any effect? 1 famous legend of Thach anh hong in Greek mythology, according to which Aphrodite had blood lover falling rocks while protecting her and create up Thach anh hong - one testament to love. This is one stone there is a strong vibration resonance throughout the whole body and heal all the chakras, especially the region's heart.