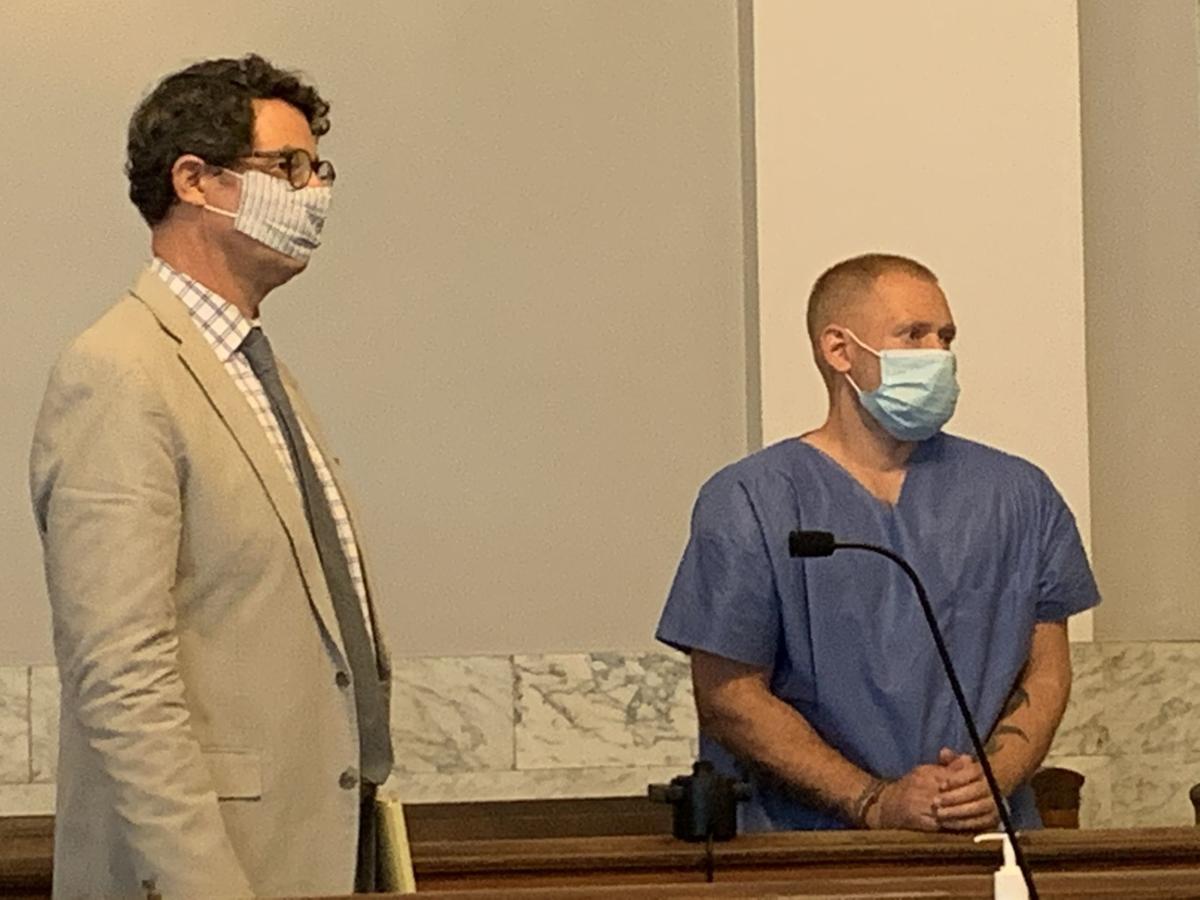 Matthew A. Sarnowitz, right, at his arraignment in June in Attleboro District Court. At left is public defender Benjamin Evans. 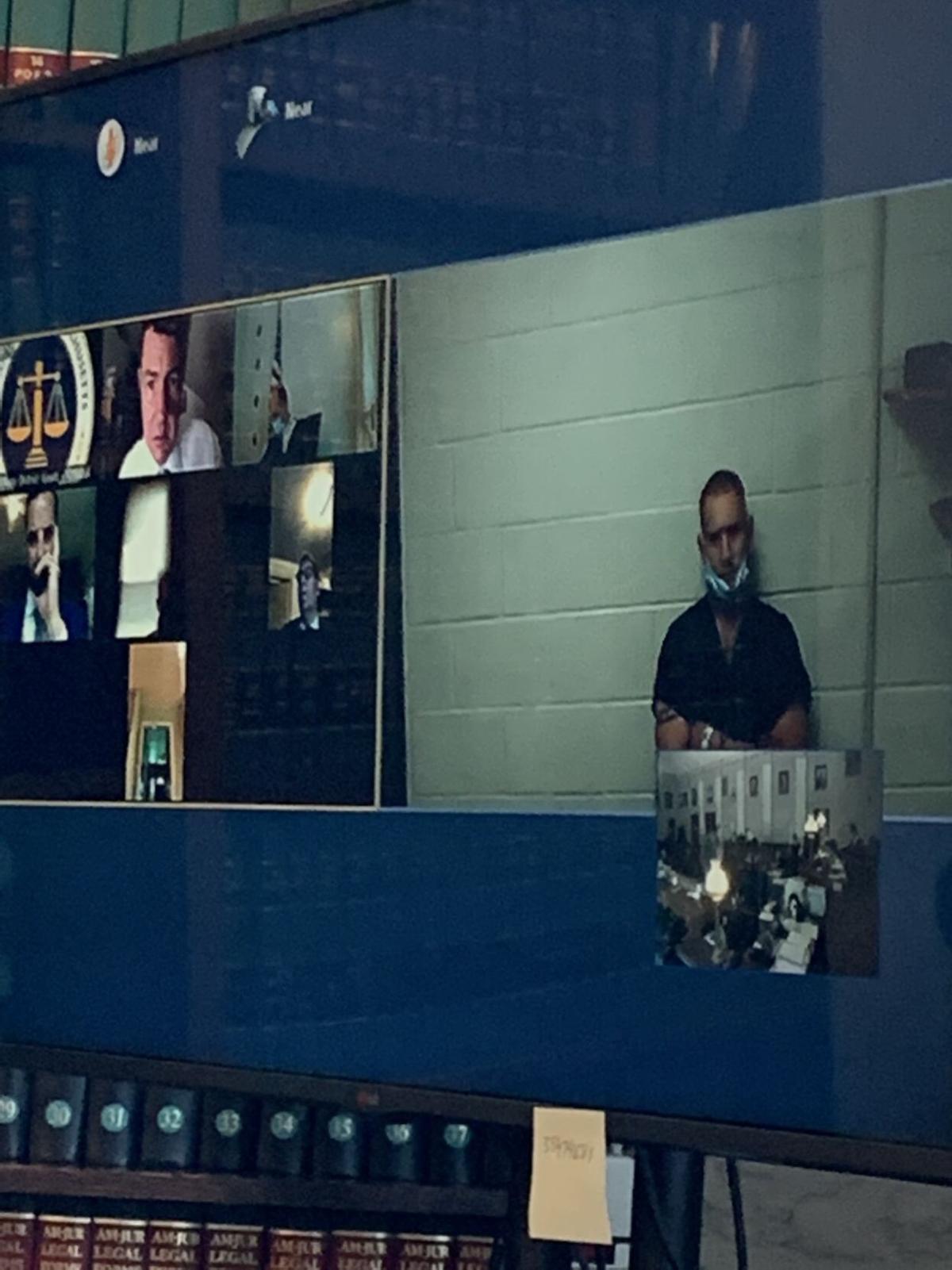 Matthew A. Sarnowitz, the suspect in a recent armed robbery at the CVS in Mansfield on Route 106, appears via Zoom Thursday for his dangerousness hearing at Attleboro District Court. He’s shown in the Dartmouth House of Correction.

Matthew A. Sarnowitz, right, at his arraignment in June in Attleboro District Court. At left is public defender Benjamin Evans.

Matthew A. Sarnowitz, the suspect in a recent armed robbery at the CVS in Mansfield on Route 106, appears via Zoom Thursday for his dangerousness hearing at Attleboro District Court. He’s shown in the Dartmouth House of Correction.

ATTLEBORO — The man charged with robbing a Mansfield CVS at gunpoint July 12 was deemed a dangerous person and ordered held without bail Thursday after a judge was informed the suspect was recently released from prison for similar crimes.

Matthew A. Sarnowitz, 37, of 9 Dogwood Lane, South Easton, was released from prison last July after serving almost 10 years for two armed robberies, lawyers said during a dangerousness hearing in Attleboro District Court. He used a gun in one of the robberies and a knife in the other, they said.

Sarnowitz was still on probation when he allegedly walked into the CVS on Route 106 just before midnight, pointed a black handgun at the clerk and demanded cash, Assistant District Attorney Henry Sousa III said.

“This defendant poses a significant risk to the community if he is released,” Sousa said after recounting the details of the CVS robbery and Sarnowitz’s two previous convictions for armed robbery while masked.

The prosecutor told Judge Daniel O’Shea that the new charges against Sarnowitz place him in “career criminal status” and he is likely facing indictment and more prison time.

Based on his two previous convictions, Sarnowitz could be charged with being a habitual criminal and face enhanced penalties.

Sousa said the case against Sarnowitz is strong. He said the defendant tried to evade police in thick woods behind the CVS and was wearing only underwear and no shoes when he was apprehended.

Police recovered boots and a lime green shirt matching the clothing of the robber in addition to cash. Police also have video evidence of the crime, Sousa said.

But Sarnowitz’s lawyer, public defender Benjamin Evans, said the face of the robber was obscured by a mask and that no gun has been recovered.

He asked the judge to release his client with a GPS monitoring bracelet, noting Sarnowitz is a U.S. Marine Corps veteran who was honorably discharged. He said Sarnowitz obeyed his probation prior to his arrest and was receiving substance abuse and mental health treatment.

Evans is seeking to have Sarnowitz examined by a private forensic psychologist to determine whether he suffers from mental health issues that bear on whether he can be held criminally responsible for the crime.

In court records obtained by The Sun Chronicle, Sarnowitz said he parked a 2010 Jeep Wrangler and walked to the CVS before the robbery.

He said he dropped a wad of cash and threw away the weapon, which he claimed was a BB gun, while he was moving through the woods, according to a police affidavit written by Mansfield Detective Gregory Martell.

“I don’t know what I was thinking,” Martell quoted Sarnowitz as telling police.

He allegedly told police he had been at his family’s home in Easton watching the Ultimate Fighting Championships “when he suddenly got an ‘itch’,” the court document says.

He allegedly said he became addicted to opioids after getting neck surgery and had been “clean,” or drug-free, for almost a year.

An innocent plea has been entered by the court on charges of armed robbery while masked (subsequent offense) and assault by means of a dangerous weapon with intent to rob.

The case was continued to Aug. 20.