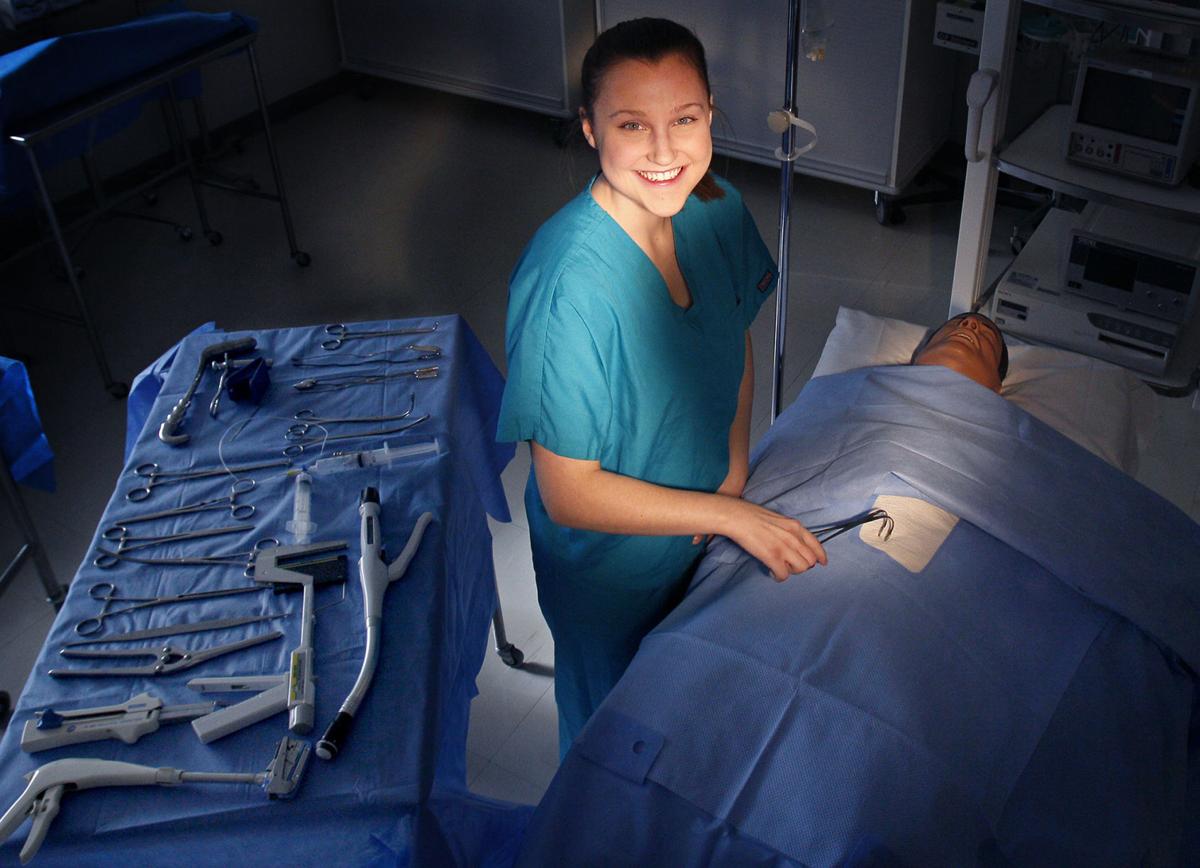 New England Institute of Technology surgical technician student Lacey Roy, 19, of Attleboro, is learning how to assist surgeons during operations in the school’s operation lab Wednesday, in East Greenwich, R.I. 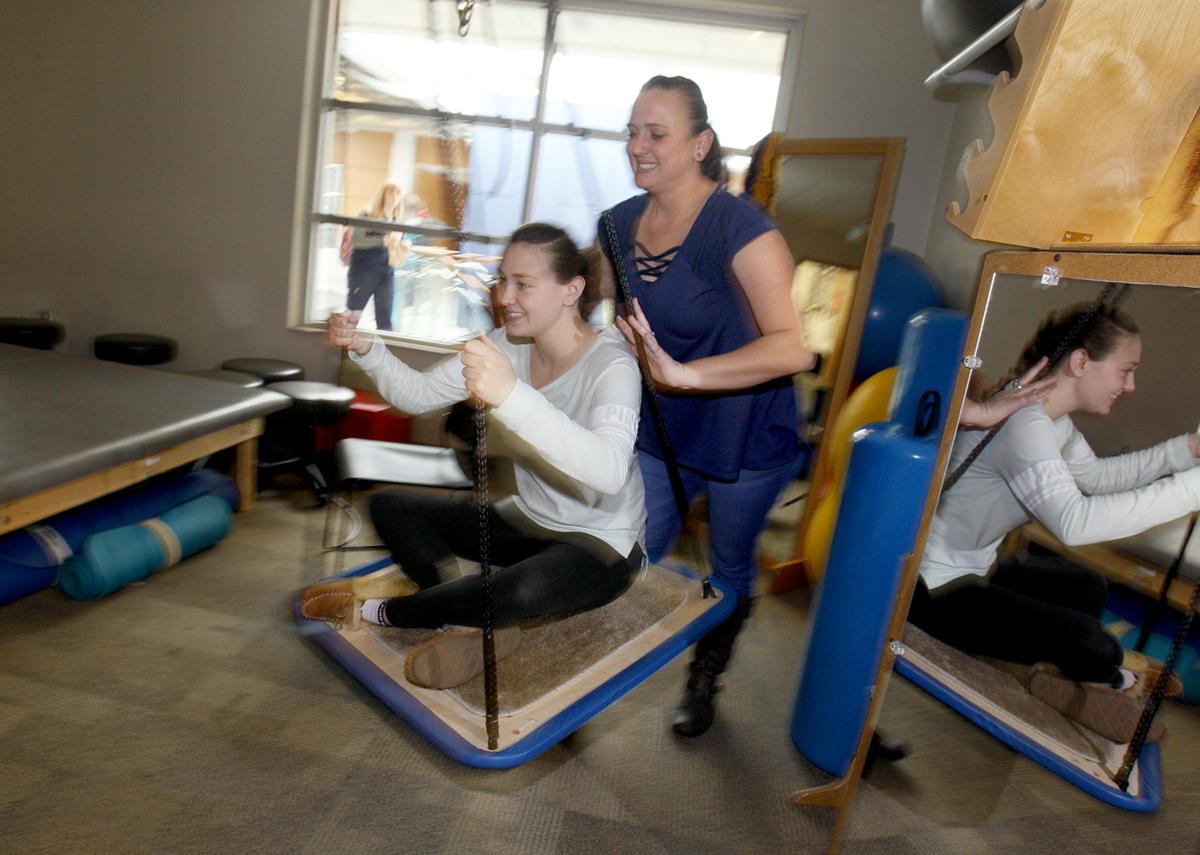 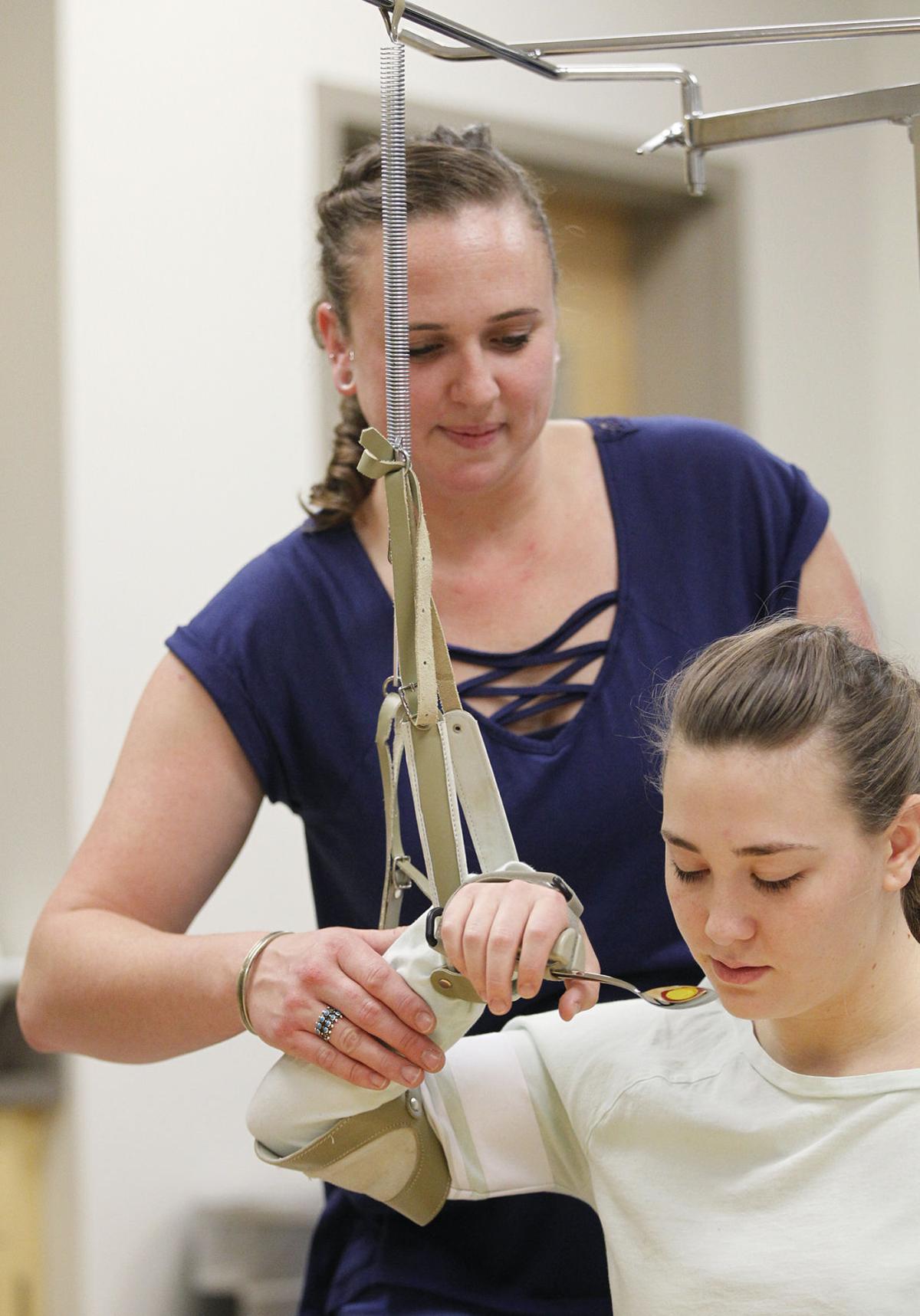 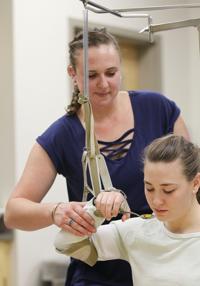 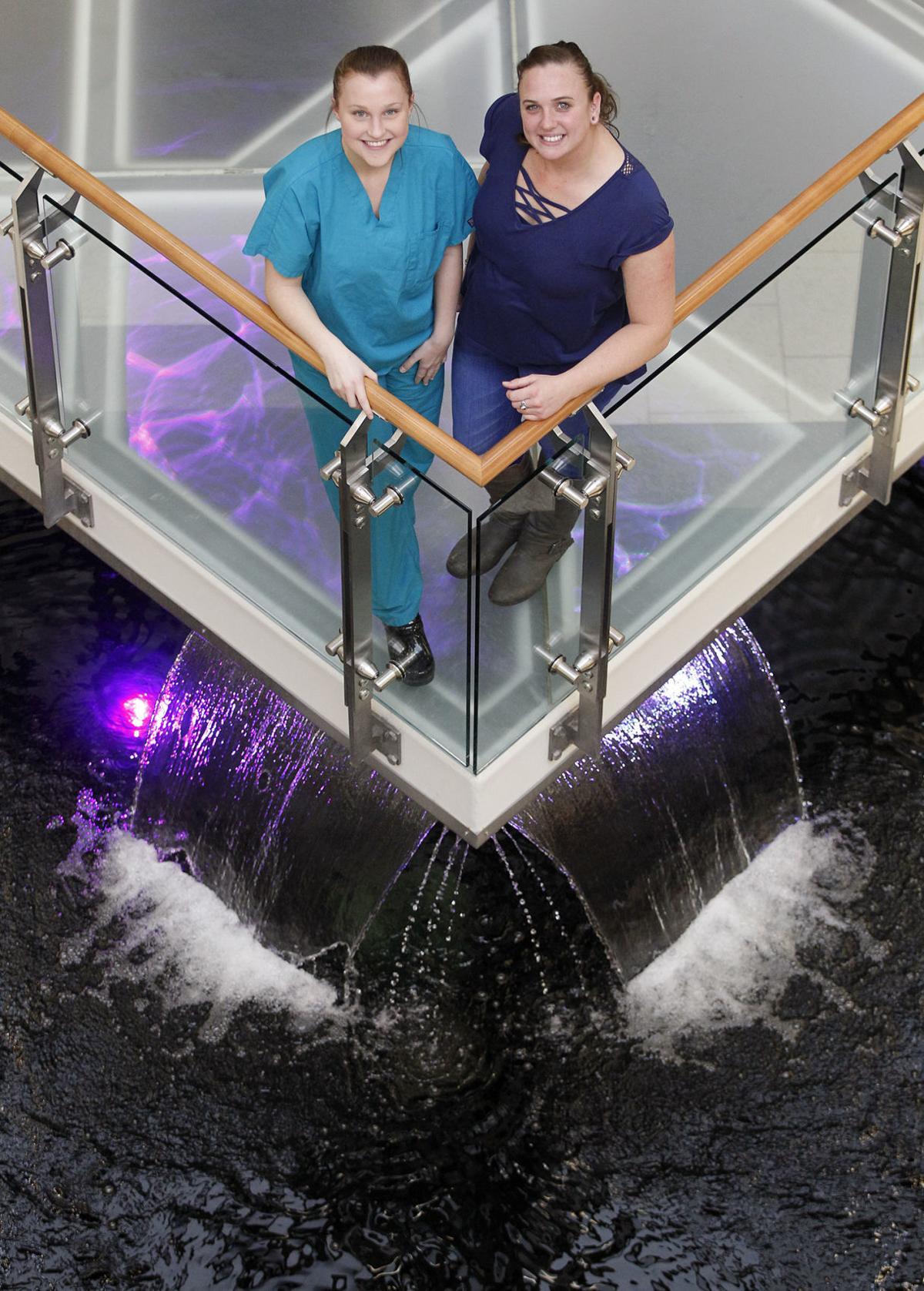 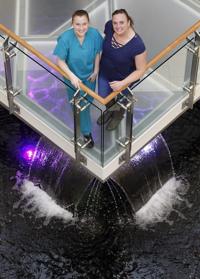 New England Institute of Technology surgical technician student Lacey Roy, 19, of Attleboro, is learning how to assist surgeons during operations in the school’s operation lab Wednesday, in East Greenwich, R.I.

After years in the food and beverage service industry, Attleboro’s Heather Smith was looking for better pay in a profession where she would be working to help people.

Now Smith, 34, is studying toward an associate’s degree at New England Institute of Technology to become an occupational therapy assistant. As an adult re-entering the educational system after years away, Smith said hitting the books scared her a little at first. But her goal of working in a field where the median salary is just south of $60,000 a year kept her motivated.

“I was pretty nervous at first, but the school had a lot of support and tutoring that helped me succeed,” she said. She’s currently making all A’s.

Now, she said, she’s looking confidently toward a career as a professional health care provider.

Lacey Roy, 19, an Attleboro High School graduate, is in a two-year program studying at the same school toward a career as a surgical technologist. A good career with good pay was an attraction, but not the only ones.

“I was really focused on something I felt passionate about,” Roy said. “Every day there are new experiences. No two cases are the same.”

The median salary for a tech is $45,000, according to the Bureau of Labor Statistics, and demand for workers in the field is growing.

Smith and Roy are just two of an increasing number of adults and recent high school grads choosing career training over traditional four-year degrees to qualify for high-paying, high-demand jobs.

Bill Stiles, a guidance counselor at Attleboro High School, says students and their parents are more open to career and technical schools as graduates focus in on productive futures.

“Not only among those considering two-year schools but at four-year colleges, too, students are more intentional about what they want to do for their careers,” Stiles said.

And with salaries for technicians and other specialists in some cases reaching high into five figures, careers ranging from medical technologists to auto mechanics are looking more and more attractive.

According to estimates compiled by the National Student Clearinghouse Research Center, overall enrollment in two- and four-year, post-high school educational institutions declined by about 1 percent during 2017, continuing a recent trend.

But enrollment actually increased in disciplines tied to medical and technical careers.

The report found enrollment in four-year liberal arts programs declined 3.1 percent, while the number of those majoring in education dropped 2.1 percent and English language and literature 2.8 percent from the previous year.

Meanwhile, students enrolled in biological and medical science programs were up 2.4 percent, engineering 1.2 percent and computer and information sciences 6.1 percent.

The contrast was even greater among two-year schools, where biomedical-related programs scored a 15.4 percent gain. Two-year schools also showed a 3.9 percent in computer and information systems, 2.3 percent in engineering and 17.48 percent in science technology.

While those trends are not mirrored in every community, educational experts say the trend to studying for careers with good pay and employment prospects right out of college represents a shift to the practical on the part of students and their parents who pay tuition bills.

“Today’s families tend to be more return-on-investment oriented,” said Steve Kitchin, vice president of corporate education and training at the New England Institute of Technology which offers a wide range of professional programs ranging from auto mechanics to medical technology including both two- and four-year studies.

Changes in the labor market have created greater demand for workers in medical and technological fields, he said, providing opportunities that barely existed before. To many students and their parents, that looks like a safer bet for a lucrative career right out of college.

Along with the increasing demand for technical and medical specialists, an increase in the number of skilled tradespeople approaching retirement affords a host of opportunities for young people seeking careers.

More than half of tradespeople were already over the age of 45 in 2012, the economic modeling company Emsi found.

With demand growing for technical jobs that don’t necessarily require a bachelor’s degree, some students and their families are beginning to see technical schools and degrees more favorably.

“In the past few years that traditional four-year degree in liberal arts or social sciences isn’t necessarily reaping the same increase in opportunities it has in the past,” said Anthony Ucci, Bristol Community College associate vice president for academic affairs.

While technical schools and programs aren’t the answer for every student, schools like BCC have the flexibility to tailor programs to specific local and industry needs. The school recently obtained a $1 million National Science Foundation Grant to train applicants in water quality science, for instance.

Local school districts, as well as community colleges, are responding to the need for workers in technical careers through an ever-expanding array of training programs and work experience opportunities.

Attleboro High School, which has 600 students enrolled in its career and technical education programs, has expanded its vocational component to include programs in plumbing and medical assisting. Many of the students enrolled in these programs will go on to study for certificates or degrees at post-high school institutions, school officials said.

Even local high schools not known primarily for offering career programs are getting into the act by initiating courses aimed at providing students hands-on exposure to fields that interest them.

North Attleboro High School, for example, is starting a program this month that will permit students interested in fire science and emergency medicine to work directly with members of their local fire department, said Judd Gavin, NAHS guidance director.

State community colleges, long a bastion of specialized associate degree and certificate programs, are already well positioned to offer training in a large number of jobs and are angling to expand their offerings.

BCC, which has a branch in Attleboro, offers programs in automated robotic systems, CNC machining and programming and computer-aided design and drafting among its career-related programs.

While BCC’s enrollment headcount has been declining recently, the school has invested in additional technical training programs and facilities recently, including a new microbiology lab in Attleboro.

The state, recognizing the need for trained workers, is helping vocational schools and community colleges retool to provide programs for students aspiring to become everything from computer technology specialists to machinists.

Last October, the Baker administration awarded $9.5 million in grants spread over a number of schools, including Tri-County which will use $119,326 to expand its advanced manufacturing program and enhance adult courses in partnership with Wentworth Institute of Technology.

“These skills capital grants will help boost our economy and equip students with new skills, knowledge and experience with state of the art equipment across the Commonwealth,” Gov. Charlie Baker said.

Bristol County Agricultural High School received $493,729 to build a natural resource management program that will incorporate drone technology, while Southeastern Regional will get $319,824 to upgrade machinery in its machine technology program.

The governor also announced a new program that will permit area residents interested in careers in advanced manufacturing to take courses at local vocational high schools and be eligible for state and federal tuition assistance.