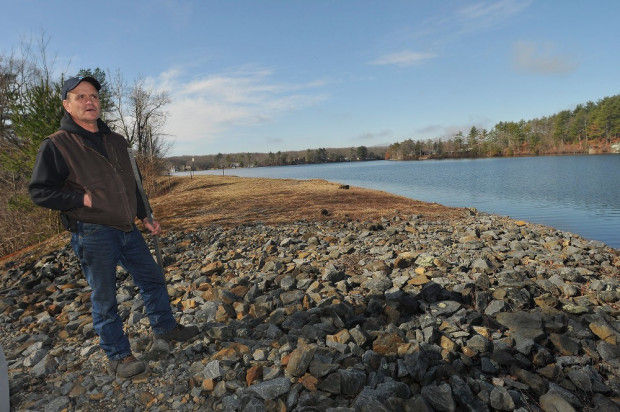 Attleboro Watershed Manager Steve Brasier at the site of one of their reservoirs, Lake Mirimichi on the Foxboro side. Attleboro has water rights to the recreational lake that is also located in Plainville. 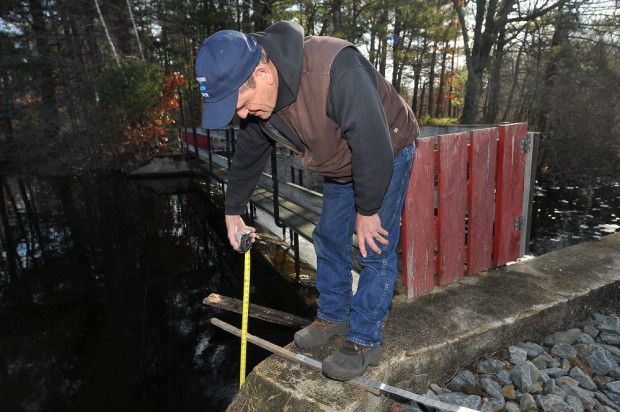 Attleboro Watershed Manager Steve Brasier checks the water depth on the Foxboro side of Lake Mirimichi, one of the city’s water supplies.

Attleboro Watershed Manager Steve Brasier at the site of one of their reservoirs, Lake Mirimichi on the Foxboro side. Attleboro has water rights to the recreational lake that is also located in Plainville.

Attleboro Watershed Manager Steve Brasier checks the water depth on the Foxboro side of Lake Mirimichi, one of the city’s water supplies.

His title is watershed tender and he visits each reservoir, pond and dam at least once a week. Some he visits every day.

He makes measurements, checks equipment and records nearly every statistic that can be recorded.

Braiser clears brush, picks up litter and looks for signs of vandalism or other illegal activities.

It's a job he loves because the territory he covers doesn't seem like it belongs in an old industrial city in Southeastern Massachusetts. It's near highways and residential cul-de-sacs, but it seems more distant.

"I feel like I'm in New Hampshire every day," he said.

And that's just fine for the self-described "outdoors guy."

There are beavers about and he's likely to see coyotes and deer any time along with an array of water foul.

There's an abundance of fish in the ponds.

He's proud of the work the water department does to ensure a constant flow of clean water to homes and businesses.

One thing residents know for sure is that when the tap is opened in their homes or businesses, water comes out, he said.

It's taken for granted.

But the percentage of those who know where the water comes from is probably not that high.

"I bet if you took 10 residents of Attleboro, they wouldn't know about these places," Braiser said during a tour of the city's water sources last month.

So here's a primer.

All of it comes from ponds or lakes fed by rivers, streams, runoff and of course rain. There are no wells.

Manchester Reservoir is the city's largest water source, holding 1.1 billion gallons when full, but it has no direct river or spring to fill it. Water is pumped into it from Luther Pond.

The reservoir was built when Interstate 95 was cut through the city back in 1957.

Water from Luther Pond, which is fed by the Seven Mile River, is pumped into the 252-acre pond through a 48-inch pipe. There are two pumps at Luther Dam. It take one pump 24 hours to raise the level in Manchester one inch.

From Manchester, water flows down Four Mile Brook which dumps into Orrs Pond at the West Street Plant. Water can also be released through a 48-inch to 30-inch aqueduct which flows directly into the plant.

Some of the water that ends up in Manchester comes from Hoppin Hill Reservoir in North Attleboro. When Hoppin Hill is spilling, the water dumps into the Seven Mile which flows into Luther where it continues downstream to Orrs Pond, or is pumped into Manchester.

Hoppin Hill, which holds 200 million gallons, was built in 1910 and is the city's main back-up reservoir.

The Wading River Plant is fed by Lake Mirimichi, a man-made lake that straddles Plainville and Foxboro - which holds 495 million gallons - and Blake's Pond in Mansfield.

When Crocker Pond in Wrentham is full and spilling water over its dam, that water finds its way to Mirimichi through an unnamed brook.

Attleboro has owned the water rights to Mirimichi for nearly 100 years.

Water from Blake's is diverted into two filter beds, which help clean the water, which then flows into the Wading River Treatment Plant. From there it flows into the water distribution system.

Attleboro water supplies and use