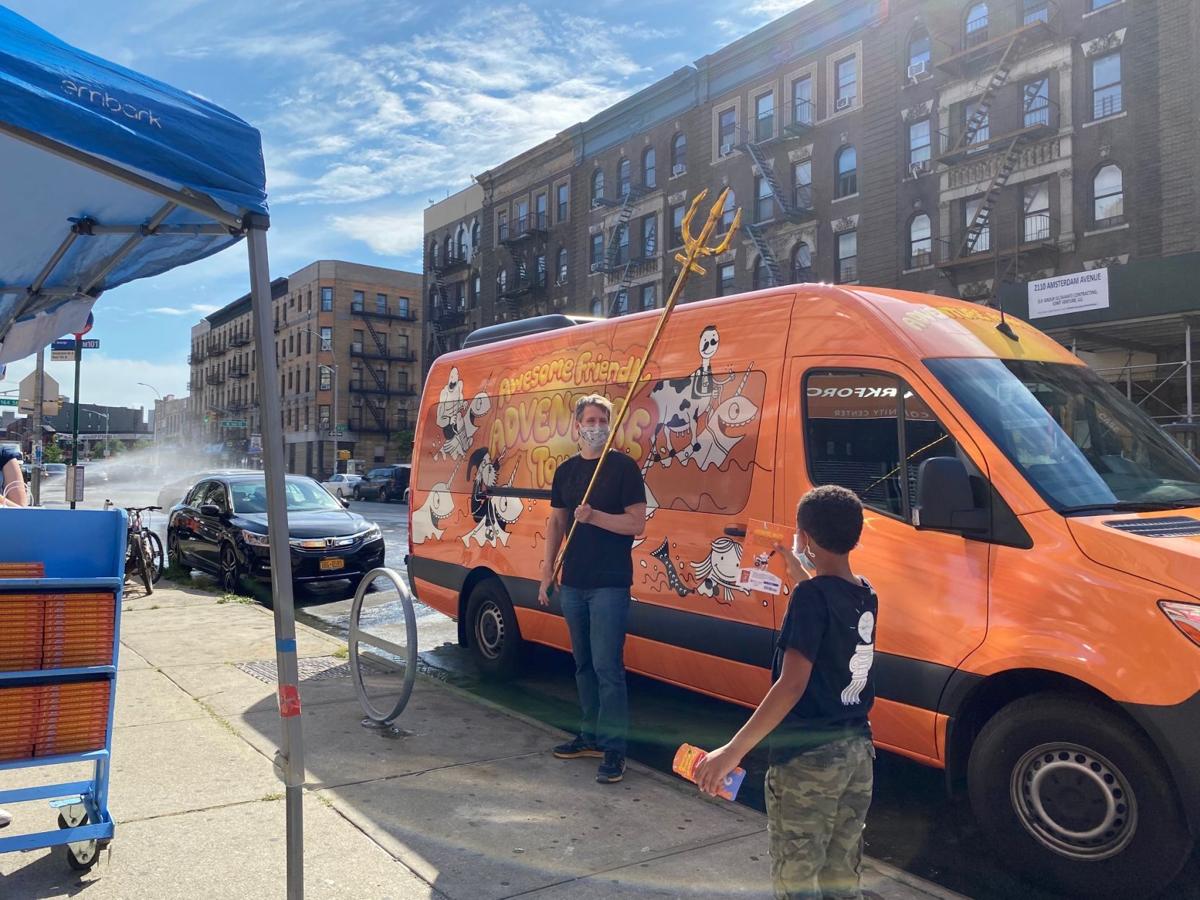 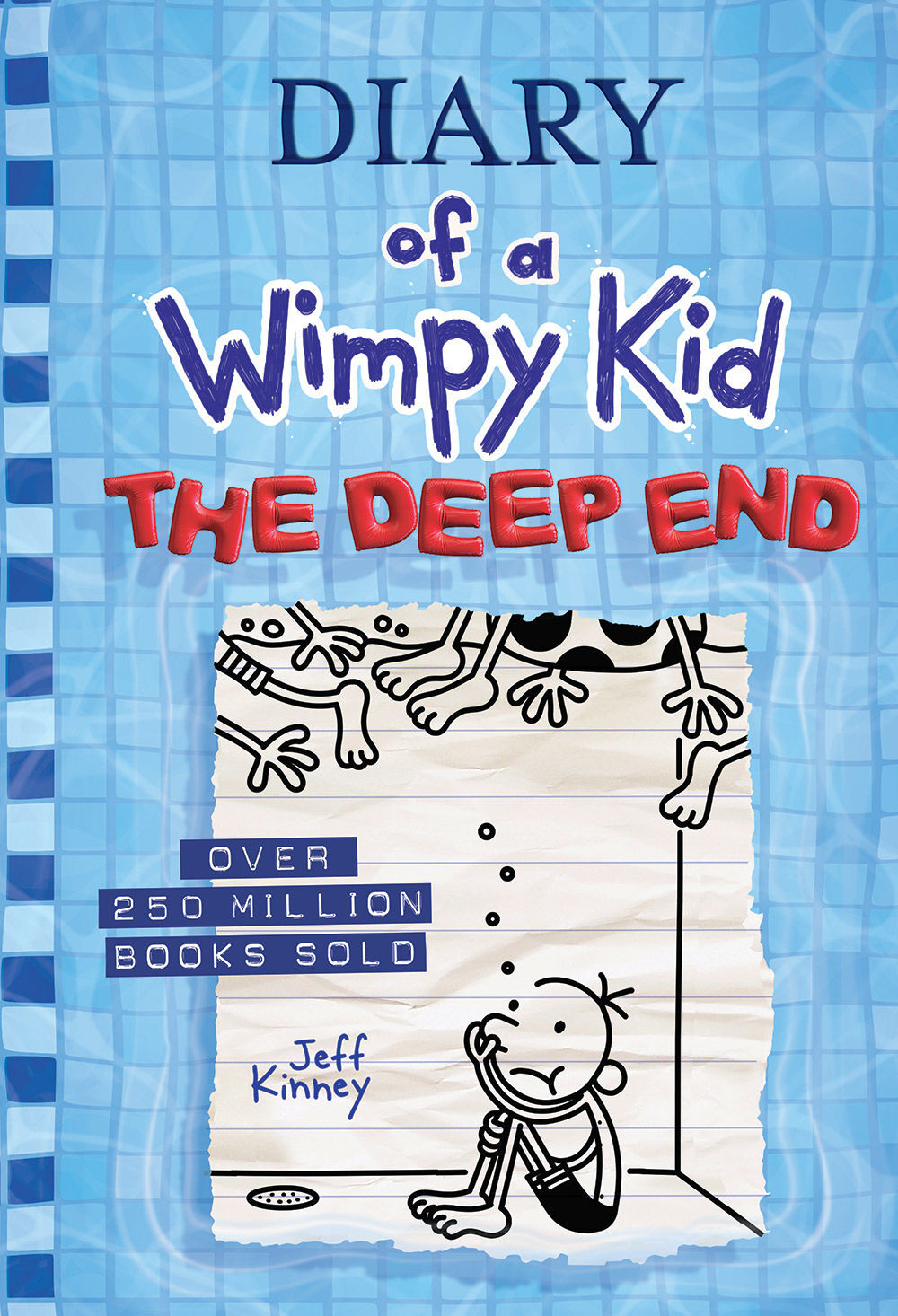 Jeff Kinney kicks off a new pandemic-style book tour for “The Deep End,” the 15th book in the Diary of a Wimpy Kid series, on Sunday at An Unlikely Story in Plainville. The book comes out Oct. 27.

Jeff Kinney kicks off a new pandemic-style book tour for “The Deep End,” the 15th book in the Diary of a Wimpy Kid series, on Sunday at An Unlikely Story in Plainville. The book comes out Oct. 27.

By the time the coronavirus is long behind us, Plainville children’s author Jeff Kinney might be an expert in how to plan a book tour during a pandemic.

In just three months, the creator of the Diary of a Wimpy Kid series has done two.

In August, Kinney set off on a “bare-bones” tour of the Northeast for his book “Rowley Jefferson’s Awesome Friendly Adventure.” He had with him just two things: A van and a 7-foot grabber pole, transformed into a trident and used to deliver pre-signed books to his fans in a socially-distant way.

And while the tour was focused on Rowley Jefferson’s adventure, it was an adventure for him, too.

Like much of 2020, the tour was full of unexpected events. His second stop coincided with a large storm that left the town without power. His van broke down partway through, and Kinney had to watch YouTube videos to figure out how to fix a muffler himself. It was blazing hot.

But it was worth it.

“What really surprised me was how grateful parents and kids were,” Kinney said. “For the parents, we gave their kids something to look forward to. And for the kids, it was like, finally, something is not cancelled (because of the pandemic).”

The happy faces he met left Kinney determined for round two, to promote his latest book, “The Deep End,” which comes out Oct. 27. The title is the 15th in the Wimpy Kid series.

Kinney will kick off his 20-city tour on Sunday at his Plainville bookstore, An Unlikely Story. The event is sold out but tickets for other Massachusetts and Rhode Island locations are still available on his website, www.anunlikelystory.com.

And this one will take the experiences Kinney had in his first pandemic tour and expand on them in a new way: A drive-thru pool party.

In “The Deep End,” protagonist Greg Heffley and his family find themselves experiencing a “pandemic-adjacent” quarantine, stuck in their grandmother’s basement as they await home renovations, Kinney said.

Dad works from home and the kids are left with board games, puzzles and their imagination to make the best of it.

Eventually, the family heads off on a camping trip, expecting to embrace the solitude of the wilderness. They instead end up stranded in an RV park that offers everything a family could need.

“It’s not a book about COVID-19, but it acknowledges quarantine life and also escapism,” Kinney said. “At the end they’re left wondering if it’s better to be isolated, or better to be with other people. I still don’t know the answer to that.”

Families who escape their own pandemic quarantines to attend Kinney’s book tour will find a drive-thru set up that embraces all of the key elements of a party — music, lights, decorations and games — but at a distance. Cars will drive through a tunnel that makes them feel like they’re underwater before meeting Kinney at the end of a diving board. There, he’ll hand out books using a pool skimmer.

“We had this idea of, ‘How could we amplify the socially-distant experience in the pandemic, but make it as fun as possible?’” Kinney said.

Kinney typically appears before large, sell-out crowds where he is relegated to a stage or platform in a sit-down setting. But the drive-thru approach may be something he carries forward even after people are allowed to gather once again.

“Last time we looked at each other, my publicist and I said, ‘This might be the best way to do this, pandemic or not,’” Kinney said. “It’s efficient, you can make it fun and you create a memorable experience for someone. It’s really exciting to do things this way.”