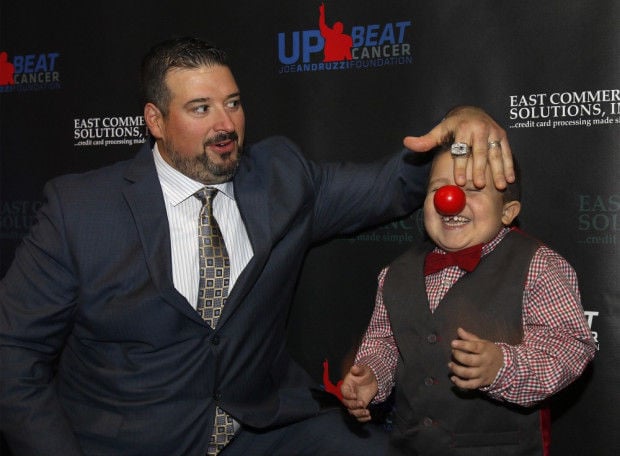 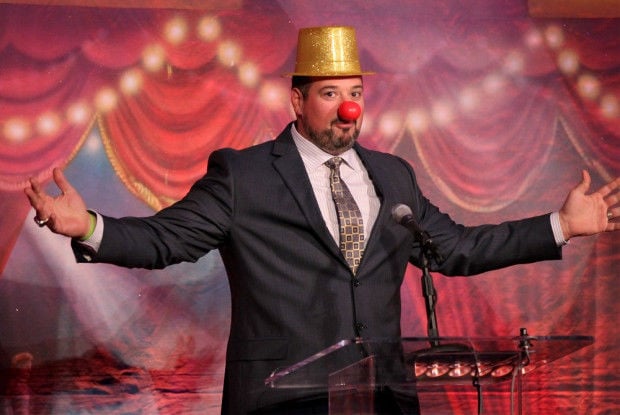 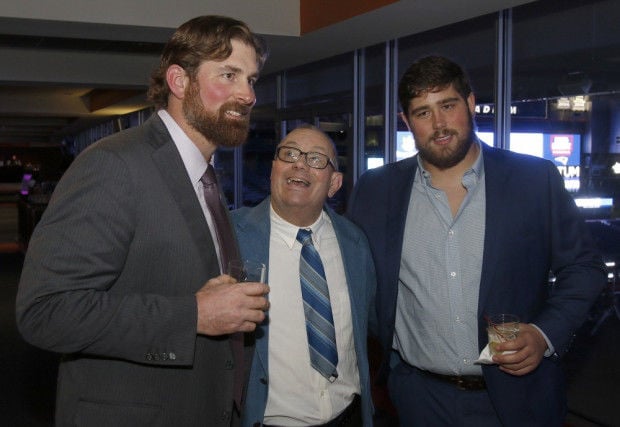 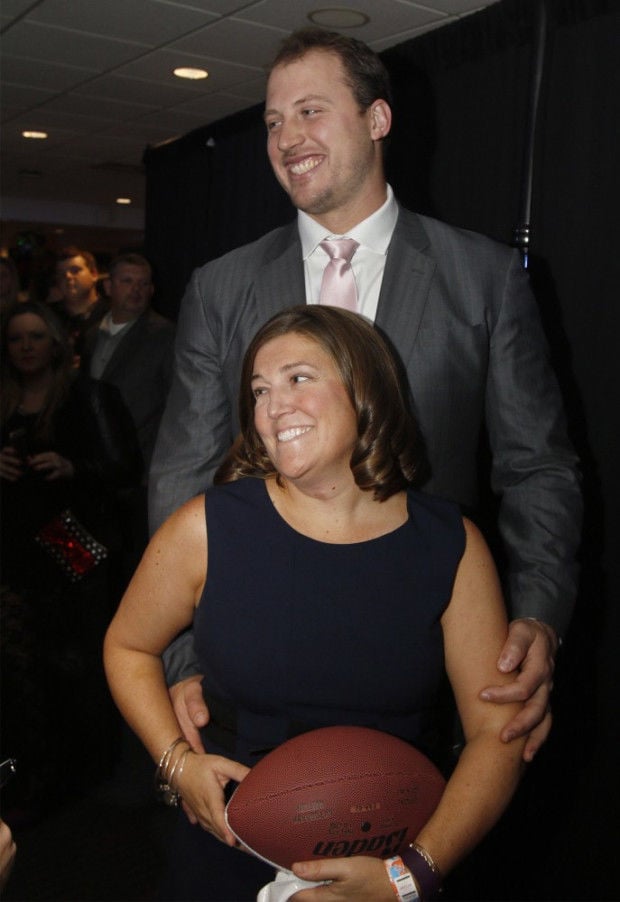 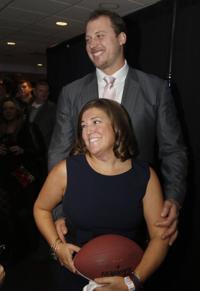 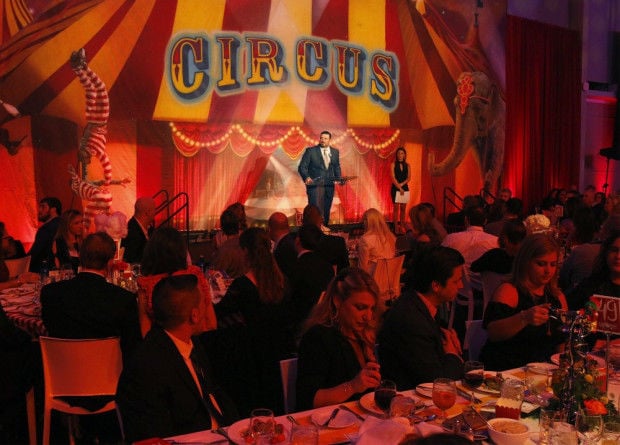 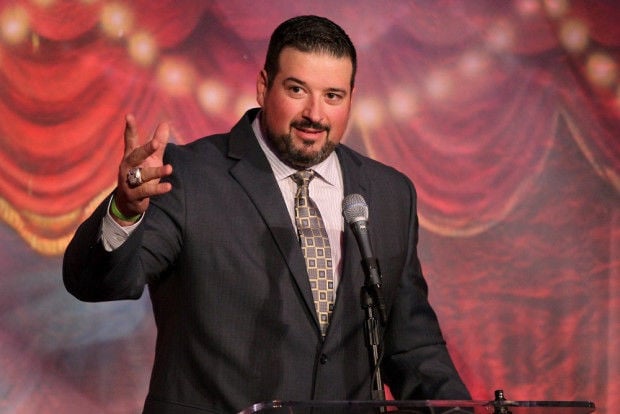 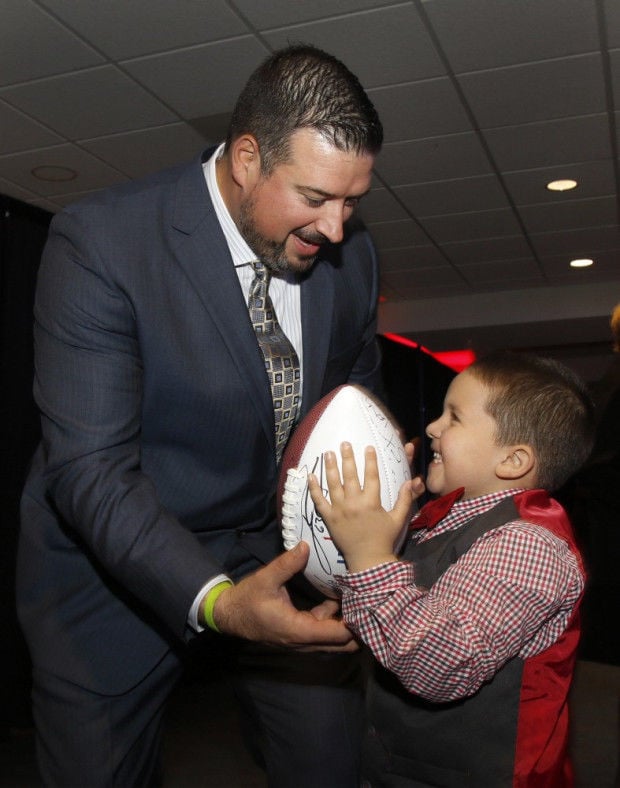 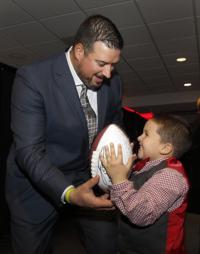 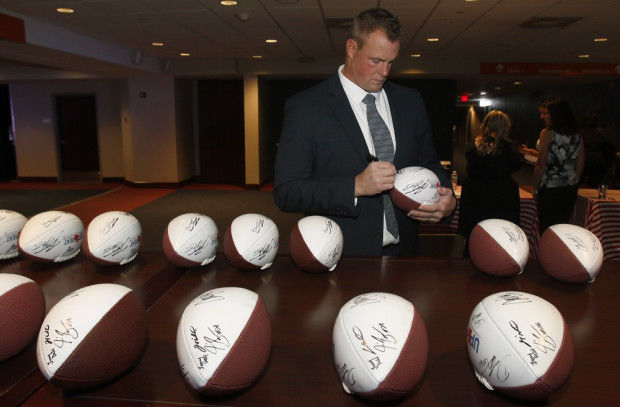 Former New England Patriots player Russ Hochstein autographs footballs to be auctioned off as a fundraiser for the Joe Andruzzi Foundation at Monday's Ninth Annual Gratitude Gala at Gillette Stadium in Foxboro. 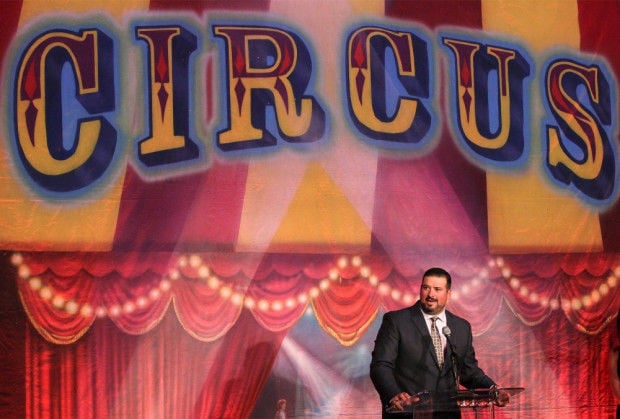 Former New England Patriots player Russ Hochstein autographs footballs to be auctioned off as a fundraiser for the Joe Andruzzi Foundation at Monday's Ninth Annual Gratitude Gala at Gillette Stadium in Foxboro.

FOXBORO - The circus came to town Monday night. More specifically, to the Putnam Club at Gillette Stadium, where the Joe Andruzzi Foundation held its ninth annual Gratitude Gala to benefit cancer patients and their families.

With court jesters on stilts, acrobats and jugglers entertaining the nearly 800 people "under the big top," the festive atmosphere had, at its core, a very serious mission.

Andruzzi, a former New England Patriot and cancer survivor, donned a gold glitter top hat and a red clown nose when he welcomed everyone and thanked them for their generosity.

Andruzzi, who founded the foundation with his wife, Jen, said it's important to "keep paying it forward" and urged everyone to "live life to the fullest."

One of the families helped by the foundation was Michelle and Herberto Calado of Pawtucket, whose son, Sebastian, 6, spent two years getting cancer treatment at Hasbro Children's Hospital in Providence.

"We were struggling with our mortgage and the Joe Andruzzi Foundation helped us out financially so we could focus on taking care of our son and our other children," said Michelle Calado, 31, a dialysis technician. "Nobody can prepare for this, and we were so happy to be able to keep our house so he was able to be in a place that was familiar to him and he could feel safe."

Stephen Connaughton, 49, a financial adviser from Mansfield, called the work the foundation does "phenomenal." His daughter plays soccer with Andruzzi's daughter, and he and his wife, Caroline, 35, have gotten to know him through local youth sports.

"He has such a big heart," his wife said. "He is authentic - a real guy who went through so much and is now giving back."

Monday night's event was emceed by CBS sports reporter Jenny Dell, who asked for a show of hands of how many people either had cancer or had a person close to them with the disease.

The sea of arms that were raised made for a powerful statement - one that Dell used to encourage guests to continue their support for the foundation. Using the Patriots' mantra, "do your job," Dell, a former NESN reporter who covered the Red Sox, told the crowd that the Joe Andruzzi Foundation needs to continue to do its job, and that is "to alleviate cancer's financial and emotional burden so [patients and their families] can focus on one thing: getting better."

Rhode Island-based jewelry company Alex and Ani received the foundation's annual (Up)Beat Award for its longstanding support of the organization. Guests all received beaded bracelets from the popular jewelry manufacturer.

Auctioneer Paul Zekos kept the bidding going during the live auction segment of the evening, which included two tickets to the popular Broadway musical "Hamilton" along with an overnight stay at New York City's Marriott Marquis, and dinner for two at Davio's, that went for $10,000.

The item receiving the highest bid was for dinner for 10 at Abe & Louie's with Patriots special teams captain Matt Slater, which went for $15,000. Dinner for eight at Luciano's with past and present New England Patriots offensive linemen received $14,000 bids - and since there were two warring bidders, each received the item, netting the foundation $28,000.

A six-day stay at a four-bedroom villa (that sleeps eight people) in Telluride, Colorado, also went to two bidders, for $13,000 each, totaling $26,000 for the foundation.

JULIET PENNINGTON is a freelance writer for The Sun Chronicle. She can be reached at writeonjuliet@comcast.net.