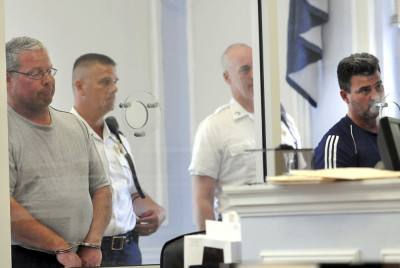 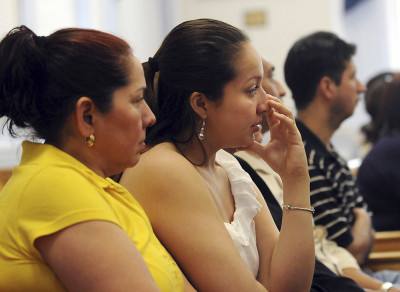 Relatives of Angel Ramirez sit in district court Monday in Wrentham, during the arraignment of Daniel Bradley and Paul Moccia for the murder of Ramirez, who has been missing since March. (Associated Press photo) 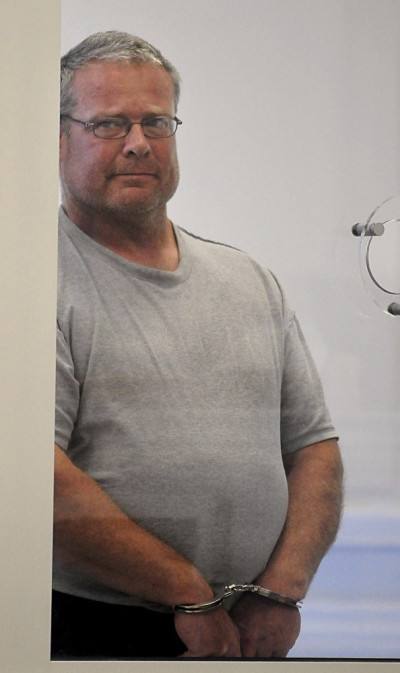 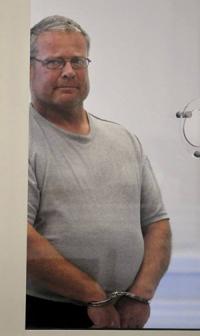 Relatives of Angel Ramirez sit in district court Monday in Wrentham, during the arraignment of Daniel Bradley and Paul Moccia for the murder of Ramirez, who has been missing since March. (Associated Press photo)

WRENTHAM - Two longtime friends are accused of what authorities say was a gruesome murder at a Walpole concrete business, where a suspected drug dealer was shot, dismembered and "cooked" to destroy evidence of his remains.

Daniel Bradley, 47, and Paul Moccia, 48, who have known each other since high school, were ordered held in jail without bail after pleading innocent in Wrentham District Court to murder.

Moccia decided he was not going to repay Ramirez, a Guatemalan immigrant, and instead hatched a plot to kill him, Nelson said.

Nelson said Moccia met Ramirez on March 20 near the R.J. Bradley Corp. in Walpole that Bradley co-owns. Moccia allegedly shot Ramirez in the back with a .357-caliber pistol and his body was dismembered and disposed of at Bradley's business, Nelson said.

"The best information we have is that the body was cooked," Nelson said during a bail hearing before Judge David Turcotte.

Nevertheless, Nelson said prosecutors believe they have a strong case which they expect will get stronger when forensic evidence recovered from the concrete factory is tested.

Prosecuting a murder case without a body is unusual, but there is precedence.

In 2002, Norfolk County District Attorney Williams Keating's office became the first in the state to win a murder conviction without producing a body.

Joseph Romano Jr. of Quincy was convicted of second-degree murder in the killing of his wife in a case where prosecutors produced blood and tissue samples taken from an electric saw taken from their home.

Ramirez, of Framingham, was reported missing by his girlfriend on March 24, Nelson said. In her last conversation with him, the girlfriend told authorities he was going to meet a man named "Paul" about some equipment, possibly construction equipment, Nelson said.

Nelson said Moccia drove the victim's pickup truck to Framingham after the murder and stopped in Wellesley to meet his brother, an event caught on videotape.

Moccia got his brother to drive him from Framingham to Dedham to get his own vehicle, Nelson said, by telling his brother a cover story about Ramirez leaving a bar with a woman and telling him to take his truck.

Attorneys for the two men said their clients staunchly deny any involvement with Ramirez's suspected demise and questioned whether a crime occurred at all because the victim's body has not been recovered.

Bradley, of Westwood and an assistant football coach at Xaverian Borthers High School in Westwood, was described as the father of a 2-year-old son who is engaged to be married.

John P. Gibbons of Dedham, one of Bradley's defense lawyers, said that Bradley did not know Ramirez. He also said that Bradley and Moccia were questioned repeatedly by investigators in the last several weeks, but Bradley never fled.

"He wants to defend his name and his family's name," Gibbons said. "The evidence will show in the end, there are forensics, that Mr. Bradley had nothing, nothing to do with this. No involvement at all."

Moccia, of Dedham, was described as a devoted father of two sons who is separated from his wife and taking care of his mother who is ailing and in a nursing home. He is a toll taker for the Massachusetts Turnpike and was a former prison guard.

His lawyer, Steven C. Boozang of Dedham, told reporters he has known Moccia for 25 years and is shocked by the accusations of murder or that he was involved in dealing drugs.

Search warrant affidavits authorities obtained for the homes of the defendants, their vehicles and the concrete company, were temporarily impounded by the judge at the request of the prosecution.

The case was continued to July 7.

Bradley, who works in the concrete industry will now be enclosed by concrete for his remaining days. Moccia, who is a football coach will be using his experience as a 'wide receiver' in his new digs.

Hojo20....this story and this is what you feel compelled to commemt on? Such disrespect for human life.

It never ceases to amaze me how people can write such shallow and inappropriate commentary about both the victim(s) and the alleged perpetrators in this forum. One should place oneself in the position of a family member of a victim or defendant who may read the content of this forum and suffer immediate anguish based on unfounded assertions.To Lawvic and jrdelegator, despite your shoot-from-the-hip approach to justice, our system of jurisprudence remains one in which the defendants are considered to be innocent until proven guilty by a jury of their peers. Let me restate this: By a jury of their peers-not uneducated street judges. When you make comments such as these you accentuate not only your ignorance of our basic rights as American citizens, but also your childish rush-to-judgment mentality. Maybe your time would be better spent reading a book or exercising your right as a citizen to attend this trial so that you can gain an evidence-based perspective before you condemn the accused.

trueverdit - you are correct, some of the comments here are beneath contempt. You are also correct regarding a defendant being guilty until proven innocent. However, that does not preclude people from having the right to form, and discuss, their opinion based on the information they are given.

I know this nice little Guatemalan place in Cedar Junction where we could meet and talk about jurisprudence and public opinion over Mai Tai's. The chops are out of this world.

Moccia (the former screw) will now be on the other side of the cage looking out. Looks like another classic case of "Roid Rage".