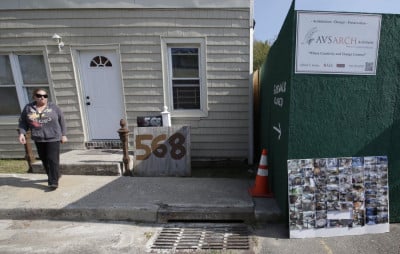 In this Oct. 2, 2013 photo, Staten Island resident Jean Laurie leaves her temporary home, left, in New York, in the Ocean Breeze neighborhood on the Southeastern shore of Staten Island. Laurie's temporary lodging is nestled beside the construction site, right, for her new home, which she plans to rebuild on the site of her former house, which was severely flooded when Superstorm Sandy poured ashore nearly a year ago. Thirty damaged homes, including Laurie's, were eventually demolished. Laurie plans to rebuild but said only about 20 percent of Ocean Breeze has returned since the storm. (AP Photo/Kathy Willens) 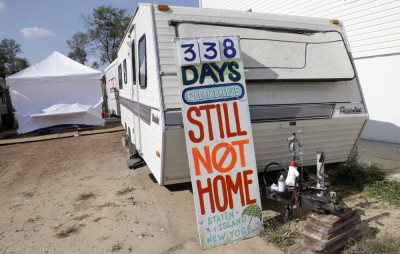 A sign counting the days since Superstorm Sandy destroyed thirty homes in Ocean Breeze rests on the front of a trailer serving as a temporary storage area on Quincy Avenue near Staten Island's southeastern shore, Wednesday, Oct. 2, 2013, in New York. Sandwiched between a salt water creek and the ocean, the low-lying area was vulnerable when storm surge from Superstorm Sandy roared ashore submerging area streets and homes. (AP Photo/Kathy Willens)

In this Oct. 2, 2013 photo, Staten Island resident Jean Laurie leaves her temporary home, left, in New York, in the Ocean Breeze neighborhood on the Southeastern shore of Staten Island. Laurie's temporary lodging is nestled beside the construction site, right, for her new home, which she plans to rebuild on the site of her former house, which was severely flooded when Superstorm Sandy poured ashore nearly a year ago. Thirty damaged homes, including Laurie's, were eventually demolished. Laurie plans to rebuild but said only about 20 percent of Ocean Breeze has returned since the storm. (AP Photo/Kathy Willens)

A sign counting the days since Superstorm Sandy destroyed thirty homes in Ocean Breeze rests on the front of a trailer serving as a temporary storage area on Quincy Avenue near Staten Island's southeastern shore, Wednesday, Oct. 2, 2013, in New York. Sandwiched between a salt water creek and the ocean, the low-lying area was vulnerable when storm surge from Superstorm Sandy roared ashore submerging area streets and homes. (AP Photo/Kathy Willens)

HACKENSACK, N.J. - Megastorms like Sandy typically generate tales of heroic rescues, resilience and recovery. But they can also reveal a darker side of humanity, one where price-gougers and con artists seek to prey upon storm victims who have already lost so much.

From gas station owners who inflate prices to unregistered contractors to people posing as Red Cross volunteers, thousands of complaints have been brought to the attention of the New Jersey Attorney General's Office in the nearly one year since Sandy struck, yielding dozens of arrests and civil complaints.

"It's sad and at the same time a lot of what happened with the storm and law enforcement was really inspiring," said acting Attorney General John J. Hoffman.

Immediately following the hurricane, the biggest concern for law enforcement was looting. One town, Brick Township, was even worried that looters would arrive by sea and used U.S. National Guard members to serve as lookouts along the shore while they worked with the State Police Marine Bureau to patrol the waterways to prevent boaters from accessing a barrier island.

Typically, however, looting is not a problem following natural disasters, studies show, and for the most part, that was case in New Jersey after Sandy.

Instead, officials spent much of their time dealing with price-gouging complaints and scams that popped up in the weeks and months after the storm passed.

The New Jersey Division of Consumer Affairs has received more than 2,000 complaints, mostly about gasoline stations, hardware stores, convenience stores and hotels that were illegally profiting from the storm, according to the state Attorney General's Office.

Hoffman said his office established a fraud group to handle Sandy-related complaints. In addition, the Monmouth County Prosecutor's Office, based in one of the counties that experienced some of the worst damage brought by Sandy, created a task force of its own. The FBI has also been investigating things such as phony charities and individuals looking to cheat insurance companies or federal aid programs.

"There's always going to be that unscrupulous person who is going to try to take advantage of a situation like Superstorm Sandy and we have to deal with it," said Charlie Webster, the public information officer for the Monmouth County Prosecutor's Office, where the Superstorm Sandy Fraud Task Force has handled 200 complaints leading to seven arrests.

State officials began filing civil lawsuits in November against businesses accused of exorbitantly inflating their prices after the storm, which slammed into the region at the end of October 2012. The price-gouging statute makes it illegal to set excessive price increases during a declared state of emergency or for 30 days after the termination of the state of emergency.

Lawsuits have been filed against 27 businesses - 15 hotels and 12 gas stations - accusing some hotels of charging as much as $400 per night and gas stations of raising prices of regular gasoline in some cases by 80 cents. None of the businesses faced higher costs that would have justified the price increases, prosecutors said.

Ten of those cases were settled with gas station owners and hotel operators agreeing to pay a combined $328,844. The remaining lawsuits are pending. The office hopes to recover close to $1 million from price-gouging cases, Hoffman said.

As the recovery progressed, investigators saw a shift toward home-improvement and charity scam complaints. The attorney general created New Jersey's Statewide Sandy Fraud Working Group in March to serve as a clearinghouse for investigations and prosecution of criminal and civil fraud related to the storm.

One case involved two organizers of a group calling itself the Hurricane Sandy Relief Foundation, who were accused of diverting donated funds into personal accounts, misleading contributors on how donations would be used and falsely claiming donations were tax deductible. The foundation was also not registered as a charitable organization, according to law enforcement officials. The foundation organizers agreed to settle the suit, dissolve the organization and allow an outside administrator to distribute all of the contributions.

The group of investigators also set up a sting operation in Highlands in Monmouth County, where undercover officers posed as homeowners requiring contractors to perform repairs. They scheduled appointments with suspected unregistered contractors resulting in criminal charges and notices of violation for unregistered practice of home improvement.

"These so called contractors offered wildly varying assessments of the damage to the home and cost estimates for rebuilding," Eric T. Kanefsky, director of the state Division of Consumer Affairs, said in a statement. "Consumers depend on the skill and expertise of legitimate contractors, and this investigation shows the pitfalls that vulnerable homeowners face when trying to rebuild."

Investigators scoured the hardest-hit areas of the state, including Monmouth and Ocean counties, reminding home improvement contractors about the need to register with the state and comply with the Consumer Fraud Act. They also issued alerts and advisories to consumers to do their homework before hiring contractors.

Between the Division of Criminal Justice and prosecutors' offices of counties that were most impacted by the storm, there have been 27 arrests and 17 indictments for Sandy-related crimes, Hoffman said.

A Metuchen man was indicted in July on charges tied to promising Sandy victims low-cost housing or cars and taking their money without delivering the goods, according to state officials.

David Scott Ruddy pleaded guilty this month to theft by deception for defrauding 13 victims of $55,000. Ruddy would approach the victims at temporary shelters in Middlesex County claiming to be a Red Cross worker or law enforcement officer who was there to help, prosecutors said. He would offer to rent them low-cost apartments he said he owned or low-cost cars he said he bought at police auctions, they added.

The state has also been active in civil court.

A judge in December ordered the organizer of the Superstorm Sandy Reconstruction Summit planned in Trenton to stop advertising and collecting $175 to $275 registration fees for the event. In a civil complaint that is still pending, state consumer affairs officials alleged that William S. Loiry of Florida was conducting business under assumed names that were not registered to do business in the state, falsely advertising that top government officials would be speaking at the event and falsely implying that the summit was affiliated with or endorsed by federal, state and local government agencies.

John M. Shoreman, an attorney for Ultimate Events LLC, a company that organized the event and of which Loiry is a manager, said the AG's office is overreaching. Loiry wound up holding the summit - not in Trenton but in Washington, D.C., Shoreman said.

"When the summit was actually held in Washington, D.C., it proved to be very successful and beneficial," he said, adding that Loiry did not charge Sandy victims; only business owners who were promoting their products and services tied to reconstruction efforts paid registration fees.

As for looting, law enforcement officials around the state said they were pleasantly surprised to see isolated incidences of it.

In Brick Township, which has sections on the Seaside Heights barrier island, property crimes in the two weeks after the storm were substantially lower than in the two weeks before the storm, said Police Chief Nils R. Bergquist. Township officers also used three vessels to patrol the bay because of concerns of "some looking to take advantage of the expensive homes on the barrier island," he said.

"It's something you have to be concerned with, because any time there is any interruption in services or infrastructure, there are people who are going to take advantage of that opportunity," Bergquist said. "But because we controlled entry into the neighborhoods and saturated them with patrols, especially those neighborhoods without power, we were able to keep crime down," Bergquist said.

One year later: Slow recovery for thousands after Superstorm Sandy