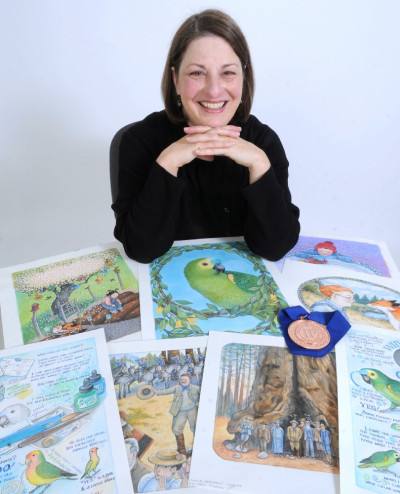 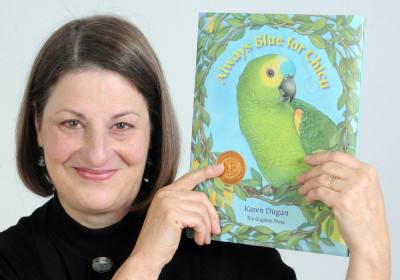 NORTH ATTLEBORO — Drawing inspiration from her own 16-year-old lovebird named Boo, a North Attleboro author has published an award-winning children's book about a parrot.

Karen Dugan, who illustrated more than 20 books before starting to write her own, wrote and illustrated "Always Blue for Chicu."

The book tells the story of a parrot named Chicu who is born in the wilds of Argentina, but is later captured and becomes a pet in several different homes.

The book, published by The Gryphon Press, was selected from more than 3,000 entries for a 2010 Bronze Medal Independent Publisher's Award for picture book of the year.

"There are lots of books about pirates and parrots, but there aren't many about parrots themselves," Dugan said. "Parrots are kind of misunderstood. I've seen parrots in small cages without stimulation. They need to have companionship - they look at you as an equal."

Dugan's book, which is illustrated with her colorful pictures of a green and yellow parrot, goes to great lengths to describe the special care that parrots require as pets and the bonds they make with people.

Dugan put in plenty of time for research, including visiting a parrot sanctuary called Foster Parrots Ltd. of Hope Valley, R.I. She incorporated some of the stories she heard there into her book.

"The stories are all in the details," she said. "I wanted it to be as authentic as possible."

Drawing has been Dugan's passion since she was a child.

"When I was in the first grade, I made comic books that I'd hand out to other kids and at recess I would draw pictures for other kids," she said.

After graduating from Parsons School of Design, she began illustrating books, including several award winners. Among the books she illustrated are "Mr. Tuggle's Troubles," a story about neatness and organization that received a 2006 International Reading honor and has been popular in Japan, and "Camping with the President," about a camping trip taken by President Theodore Roosevelt, which received a 2009 Smithsonian Notable Children's Book award.

For those illustrations, Dugan delved into historical accounts to accurately draw everything from tents to trains in Roosevelt's era.

Dugan moved from illustrator to author with her first book "Ms. April and Ms. Mae," the story of a fox that tries to help a woman save her land from developers. That book also earned praise and was a finalist for ForeWord Magazine's 2009 picture book of the year.

"My ideas come from everywhere. You have to think in terms of a 32-page book, so sometimes when you come up with a good image, you have to decide whether it's just a good card idea or something that you can use as part of the plot for a story."

Asked about the subject for her next book, Dugan said she hasn't decided yet.

"I have too many ideas. Right now, I'm treating them all equally and waiting to see what floats up to the surface," she said.

AMY DeMELIA covers North Attleboro for The Sun Chronicle. She can be reached at 508-236-0334 or at ademelia@thesunchronicle.com.