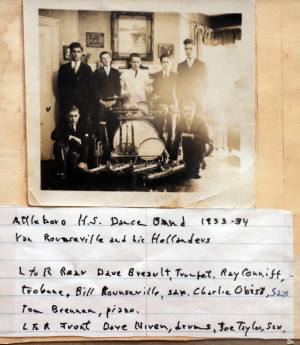 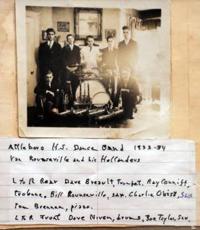 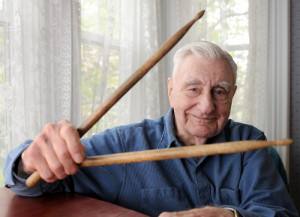 MIKE GEORGEFoxboro’s David Niven is the last surviving member of Ray Conniff’s first dance band. The band started at Attleboro High School. Below, a photo of the original band at AHS, before Conniff went on to bigger things.

MIKE GEORGEFoxboro’s David Niven is the last surviving member of Ray Conniff’s first dance band. The band started at Attleboro High School. Below, a photo of the original band at AHS, before Conniff went on to bigger things.

But before the career that won him international recognition for his choral arrangements of hit records, he was just one of the guys in a high school dance band whose members idolized the likes of Benny Goodman and Gene Krupa.

David Niven remembers those days. He was Conniff's first drummer.

Niven remembers being nervous as a kitten when called to the first rehearsal at band member Frank Ryder's house. The group was nominally led by Bill Rounseville, but Niven remembers it was Conniff who was the glue that held the band together.

"He was always the calm one," he said. "We were all teenagers. He was the one who kept everybody under control."

Niven, who went on to become a World War II pilot and an advertising executive after the war, said he's happy to see his old mentor finally receive recognition in his hometown with the planned dedication of a bandstand at Capron Park this summer.

"When you talk to people, you find that a lot of people know who he was," said Niven, who went on to live in Norton and Cape Cod before settling back in Foxboro.

The band lasted only a couple of years, until the older members graduated from high school, Niven said. But the time they had together was memorable.

Most of the rehearsals were held at Rounseville's house, where the band member's father - New York theater and recording great Robert Rounseville - would often give them advice.

"Sometimes when he was in town, he'd come to our gigs and do vocals for us," Niven said.

The teenage band was good enough to provide regular entertainment at many church dances, parties and school dances in the Attleboro area.

Later, Conniff would go on to play in or write arrangements for bands led by such swing era stars as Bunny Berrigan, Artie Shaw and Harry James.

But the talent and musical knowledge of the man who would later go on to place in the top 10 album sellers of all time shone even during high school, Niven said.

"He was always coming up with arrangements for our tunes," he said. "Sometimes we struggled to read the things he worked out."

Later, Conniff would apply his talents to creating hits for such singing idols as Johnny Ray, Marty Robbins and Johnny Mathis and devise an entirely new style of music with his Ray Conniff Orchestra and Chorus.

In 1966, he received a Grammy award for his rendition of "Somewhere My Love," the theme to the epic film "Doctor Zhivago."

Niven lost contact with Conniff and the other band members after they graduated. But the band's youngest member went on to blaze his own trails in high school sports, music and the military.

The former Attleboro resident captained the Attleboro High football team and entered Dartmouth College in 1938. He was the first student permitted to graduate in only 3 1/2 years to join the military.

He continued playing drums for decades after the war in a Dixieland band and other groups.

During the war, Niven flew Navy SBD fighter bombers in the South Pacific. After the Navy, he returned home to become an advertising man with Life magazine, where he spent the next 30 years.

He now lives with his daughter and son-in-law on Leonard Street in Foxboro.

His father, Henry, was a drummer who played in show bands and once roomed with the legendary actor Wallace Beary. His daughter, Jean Lenk, played in the University of Massachusetts band and grandson Ian, 12, who attends middle school, is also a drummer.