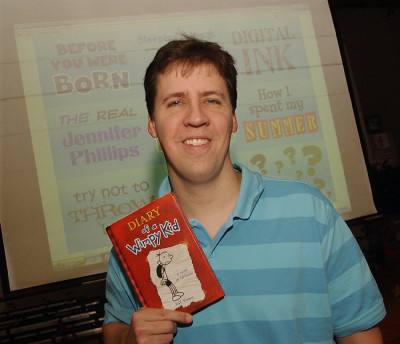 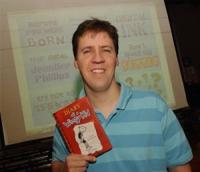 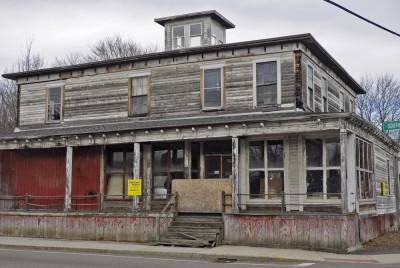 The Falk building in Plainville was purchased by best-selling children's book author, and Plainville resident, Jeff Kinney in Feb. 2012.

The Falk building in Plainville was purchased by best-selling children's book author, and Plainville resident, Jeff Kinney in Feb. 2012.

PLAINVILLE - It could be a monumental undertaking for a guy whose livelihood is based on, well, a self-admitted wimp.

Historic Falk's Market, a tattered downtown landmark, has been sold to "Diary of a Wimpy Kid" author Jeff Kinney.

The best-selling author of the children's book series and his wife Julie Kinney have bought the pre-Civil War-era building at the corner of East Bacon and South streets for $300,000 under the business name of JJK Realty LLC.

The Kinneys are Plainville residents.

Jeff Kinney confirmed the sale, but said he and his wife have not yet decided what to do with the building.

"All options are open," he said, adding that an engineer will have to look at the structure before determining whether it can be salvaged, or if it has to be razed.

He said they will speak to town officials before deciding what to do.

The empty building has been the object of both admiration and scorn in the town for years.

It is in ill repair and is often referred to as an eyesore, but it also holds sentimental value.

Residents have been so upset with its deteriorating condition, they passed an abandoned building bylaw to give the town the authority to force repairs to dangerous structures.

"It's a landmark, but it's an ugly landmark," historic commission Chairwoman Barbara Parmenter said.

Kinney said he and his wife bought the building because they want to help the town improve the appearance of downtown.

"It's something we always wanted to do for the town," he said.

Town Administrator Joseph Fernandes said Julie Kinney approached him two years ago about possibly buying the building because so many people in town complained about its appearance.

"Their objective has been to remove it as an eyesore," he said. "The only way they could do that is through owning it."

Fernandes said the couple did not buy the building to make money, and he doubts they ever will recover their investment.

"I admire them," Fernandes said.

The building had been owed since 1999 by Stanley Nacewicz.

Nacewicz said he sold it because he has had recent health problems and he feels the town blocked his past attempts to renovate it.

He said he could have sold it years earlier for more money, but wanted the building preserved for its historic nature.

The age of the building is clouded.

Nacewicz said it was constructed in 1804. Parmenter said she believes the accurate date is closer to 1860.

Both agree the building was originally located on the opposite side of South Avenue, then moved to its current location.

It was originally called The Plainville Mercantile Building and has housed a pharmacy, a general store, a hot dog stand, barber shop and a post office over the years, Nacewicz said.