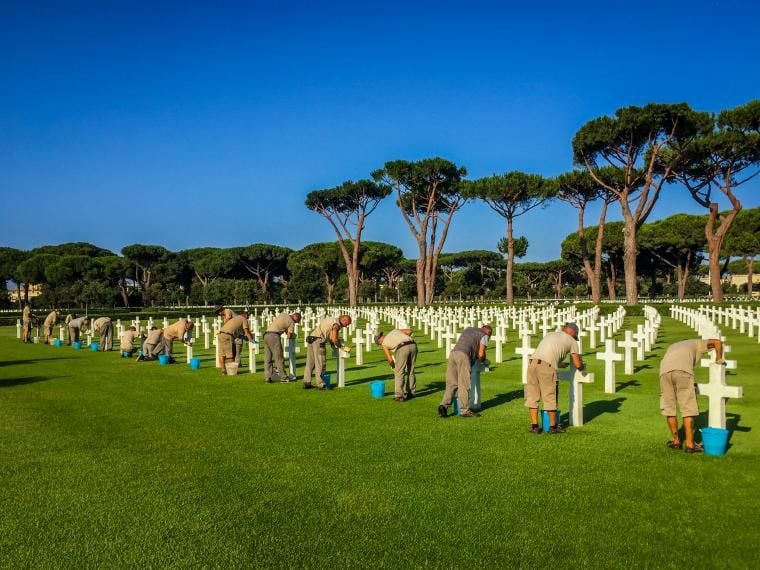 Crews clean headstones at the Sicily-American Memorial in Italy.

The photo was always in the center of my grandparents’ kitchen table: U.S. Army Pvt. Paul E. Lizotte, with the dates of his birth and death.

He was my mother’s Uncle Paul, the youngest brother of my grandmother, Laura (Lizotte) Labonte.

Meme, as we called my grandmother, would get emotional when his name would get brought up, saying that he had died in the war. But she never said much more.

And I never asked. You didn’t ask about those things when we were kids, at least I never did. You didn’t want to see your grandparents distressed.

But cruise down Cumberland Avenue in North Attleboro now and you’ll see a sign for Paul Lizotte Drive, one of the many subdivisions with comfortable homes that have popped up on the west side of town. Many of those streets are named for those who made the ultimate sacrifice for their country.

Like Paul Lizotte, a great uncle I never knew.

But this is Memorial Day weekend, when we should remember those who sacrificed so much for us. And one of the great things about 21st century life is that you can get to know someone, at least a little, long after they’re gone.

After a little Googling, here’s what I know now about my great uncle.

Paul Lizotte was just 22 when he enlisted in the Army shortly after the United States joined World War II, serving in the 45th Infantry Division, 179th Infantry Regiment. He was stationed in Italy in 1943 when his unit launched an effort to liberate Sicily.

He was apparently killed in action at the start of the offensive. He was declared dead on July 10, 1943, though his body was never recovered.

He earned a Bronze Star, a Purple Heart and numerous other honors.

My mother, who was just 4 at the time of her uncle’s death and has no memory of him either, says her Aunt Theresa, Meme’s sister, tried for years to recover her brother’s body and get some closure but was unsuccessful.

The World War II Sicily-Rome American Cemetery and Memorial in Nettuno, Italy, has a tribute to the American soldiers missing in action in the effort to oust Mussolini. My great uncle’s name is one of 3,095 engraved on the white marble walls of the cemetery’s chapel.

Also at the site is an “immense field of headstones of 7,860 of American military war dead, arranged in gentle arcs on broad green lawns beneath rows of Roman pines,” according to its website.

In addition, there is a small gravestone for Paul Lizotte near other members of my grandmother’s family at St. Mary’s Cemetery in North Attleboro.

Like I said, it’s Memorial Day weekend, and so many families have had loved ones who made the ultimate sacrifice.

It’s a good thing to ask about them and to get to know them.

And most importantly, to remember them.