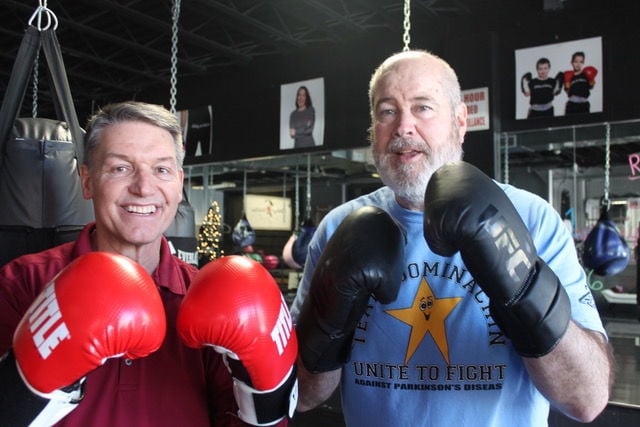 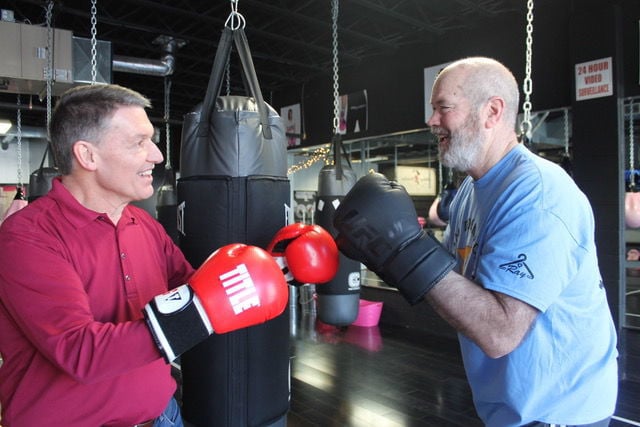 The text came out of the blue recently: “Kirb how would you like to come to a boxing class and then write about it.”

The text came from Mike Achin, my friend for 57 years. I’ve written about Mike and his battle with Parkinson’s disease several times over the years, and Mike has borrowed this space on occasion to further his cause to overcome the degenerative movement disorder which affects more than one million Americans.

Mike was diagnosed with Parkinson’s 11 years ago, when he was 51. Not long after, he discovered Rock Steady Boxing, a non-profit organization which uses non-contact boxing exercises and training to ease Parkinson’s symptoms, which include tremors, rigidity and stiffness, slowness of movement and poor balance.

Now, I still get to the gym two or three times a week, and I officiate youth and high school-age basketball games. But I’m also of the age that I grunt every time I stand up or sit down, I can’t straighten my back after years hunched over a keyboard and I hate dropping things — because then I have to bend over and pick them up.

So an invitation to an exercise class left me, well, meh.

But I thought about Mike.

Every movement, every physical activity takes time and effort — a lot of it.

And that’s been going on every day for more than 4,000 days.

It was a Saturday morning, at the Striking Beauties gym on Church Street in downtown North Attleboro, just a few hundred feet from where Mike and I attended kindergarten to Grade 8 at Sacred Heart School.

Dena Paolina, the energetic president of Striking Beauties, led the group of 15 with some line dancing to loosen up before hitting the bags. I donned some gloves and joined Mike on a bag. We worked in two-minute intervals: 30 seconds of punches (jabs, crosses and hooks, speed and power punches), 30 seconds of exercise (jumping jacks, squats, jumps), then repeat.

We worked up a pretty good sweat. After years of athletics together — from CYO basketball through high school sports to men’s softball and basketball leagues — it was the first physical activity we had done together in years.

And I can see how it can help Mike’s Parkinson’s symptoms.

For instance, Mike struggles with the speed punches but the power punches are still there. And the strength and balance those power punches require helps him navigate the daily challenges we take for granted.

Rock Steady Boxing was founded in 2006 by Scott Newman, a former Indiana county prosecutor who was diagnosed in his early 40s, and his friend, Vince Perez, a former Golden Gloves boxer. Perez developed exercises from his boxing regimen he believed would attack Newman’s symptoms at their vulnerable neurological points. In the years since, medical research has proven Newman and Perez right.

But it’s more than exercise. At the session I attended, there was plenty of laughter and joking. During one dance routine when everyone was having difficulty staying in step, Mike called out to a fellow participant, who also happens to be blind: “Hey Steve, you’re lucky you don’t have to see this #$%&.”

There’s food. And there’s fellowship. One Saturday a month, there’s a Parkinson’s support group meeting in which there’s a speaker, sharing and an acknowledgement that they’re not alone.

I asked Mike what he liked best about Rock Steady Boxing.

“The exercises are good, but when I get really frustrated…” He then threw a thunderous right to the bag, letting loose emotion pent up after more than 4,000 days of fighting challenges we take for granted.

FIRST NOTE: The Rock Steady Boxing program has been run at Striking Beauties for three years. Six classes are held each week. Contact Dena Paolino at denapaolino@gmail.com or at 617-201-1868.

SECOND NOTE: Team Dominachin, the group Mike’s family founded to raise money to fight Parkinson’s disease, will hold its 10th annual washer tournament starting at noon today at the North Attleboro Elks. By the end of the day, the Achins expect to pass more than $300,000 in funds raised for the cause.

They should be proud.

MIKE KIRBY of North Attleboro is a columnist for The Sun Chronicle. Contact him at mkirbygolf18@gmail.com.