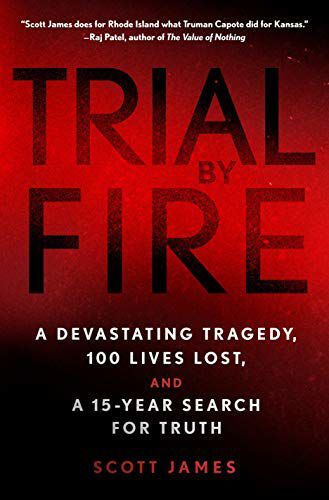 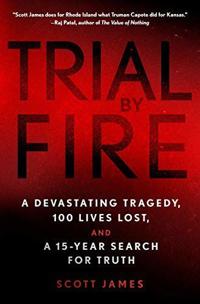 A few weeks ago, I previewed “Trial by Fire,” a new book about The Station nightclub fire that claimed 100 lives — including five from the Attleboro area — and injured more than 200 others.

Since then, I’ve had a chance to read the book, and I can tell you everything you thought you knew about the fire is probably wrong.

The fire, which occurred nearly 18 years ago in West Warwick, is considered one of Rhode Island’s worst tragedies. Police investigators, the Rhode Island attorney general’s office and even civil lawsuits could not determine what really happened on Thursday, Feb. 20, 2003.

Survivors and the victims’ families never felt a sense of closure.

Much of the mystery, it appears, has been solved by a North Attleboro native.

Scott James, a member of the Class of 1980 at North Attleboro High School and a former news director at Channel 6 in Providence, is the author of the book, which goes on sale Tuesday. Subtitled, “A Devastating Tragedy, 100 Lives Lost and a 15-Year Search for Truth,” “Trial by Fire” details the many misconceptions about the blaze.

For instance, James tells of the rush to judgment by the West Warwick police chief, Attorney General Patrick Lynch and the Rhode Island media against nightclub owners Jeffrey and Michael Derderian. James takes particular aim at the Providence Journal, which he paints as putting a quest for a Pulitzer Prize above the truth.

Among the Journal’s mistakes, James says, was a front-page follow up claiming attendance at The Station was above capacity on the night of the fire. It was not true, but those mistakes were repeated as truths, as I did when I told of the attendance during my preview of the book.

Readers will learn that the Derderian brothers did not know foam applied to the nightclub’s walls was highly flammable, as the public believed. They had in fact been told by a salesman that it was flame retardant and had paperwork to prove it.

The Derderians did not know that the tour manager for the band playing that night, Great White, was going to set off fireworks. The manager had only told a nightclub patron who helped out with the sound that night.

Jeffrey Derderian did not take the cash drawer and hide it in the snow, or block exits from patrons trying to escape the blaze.

These and many other misconceptions add up to a portrait of the brothers as fall guys for a tragedy caused more by a lack of government oversight.

The Derderians accepted a plea bargain only because they feared a worse sentence from a justice system and a Rhode Island public in search of villains.

James managed to uncover these truths with some hard-nosed reporting and, more importantly, by securing the first-ever interviews given by the Derderians and their families. The brothers had chosen not to speak to the media, preferring to tell their story in court.

That never happened, thanks to the plea bargains and quick settlements in the civil lawsuits. But James, who told me he was haunted by the nightclub fire, spent the better part of 10 years chasing down the clues and interviewing the Derderians at length on several occasions.

But this is not a book simply about uncovering truths. This is about the people whose lives were changed forever by the blaze.

Most compelling are the stories of Phil Barr and Gina Russo.

Barr was a college swimmer whose lungs and back were severely injured by the blaze. He spent months in a hospital, including time in a medically-induced coma.

But he eventually rejoined his Bates College teammates to become their most enthusiastic member. There were many cheers and tears when he swam a leg in a relay at a championship meet.

Russo barely escaped the fire, thanks only to her fiancé, Fred Crisostomi. He did not make it out alive, and her injuries were devastating.

But she became the face of the survivors, telling her poignant, from-the-heart story that always elicited tears on TV shows and fundraisers.

And James explains how the nightclub might have had only a little more than 300 patrons that tragic night, but the fire touched virtually every Rhode Islander. He does this by telling the story of Donald Carcieri.

Carcieri had only been governor of Rhode Island a month when he received a late-night call.

“There’s a bad fire,” an aide told Carcieri, who was with his family in Disney World.

Carcieri grabbed the quickest flight he could find out of Orlando to help with the devastation in West Warwick.

A career businessman who had never held public office, Carcieri drew upon his CEO experience to do what he thought was best for Rhode Island: provide whatever resources possible to the first responders and medical workers while comforting the victims’ families. The governor even stayed at a Warwick hotel where relatives of the victims were placed to await word on their loved ones and to keep them away from the media.

Carcieri thought he was being calm and dispassionate — until he watched a newscast a few days later showing the names and photos of some of the victims.

“Suddenly on the screen was the image of a beautiful young woman with a friendly smile and blond hair,” James writes.

“The governor and his wife knew the woman.”

She was Katie O’Donnell, a 26-year-old medical assistant from Seekonk, the daughter of a former work colleague of Carcieri’s. Their families had been friendly years before and they took their children to play together at a nearby lake.

The sight of Katie, Carcieri told James, felt like “somebody hit me with a two by four.”

As James writes, “Until Katie, it never dawned on (Carcieri) that someone who had been so intimately entwined in his own life was one of the fire’s victims.”

Thanks to James’ dogged work, “Trial by Fire” reminds us that tragedies do not always have villains, but they do have flawed humans and institutions. And the result is that there are victims, and in the case of The Station nightclub fire, far too many of them.

Mike Kirby, What you have said about the book “Trial by Fire” by Scott James has captured my attention. I lost my brother due to the Station nightclub fire. Most of the students like to get research paper writing help online to complete assignments on time. I badly want to know some true facts regarding that fire incident.