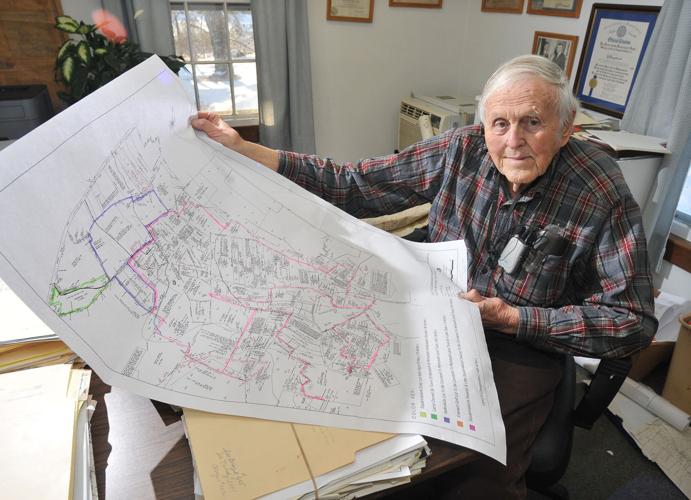 E. Otis Dyer, in 2018, with a map he used for research to find the deeds to the land he donated to the Rehoboth Land Trust.

Redway Plain, off Route 44 and Bay State Road in Rehoboth.

E. Otis Dyer, in 2018, with a map he used for research to find the deeds to the land he donated to the Rehoboth Land Trust.

Redway Plain, off Route 44 and Bay State Road in Rehoboth.

E. Otis Dyer, who died May 23 at 95, loved history, especially the history of Rehoboth, which he called home for nearly three quarters of a century.

He was also an avid reader of Henry David Thoreau, the author of “Walden,” the brilliant reflection upon simple living in natural surroundings.

Dyer combined those two loves to make contributions that will benefit future generations from Rehoboth and all of Southeastern Massachusetts.

It’s easy to see why Dyer was named grand marshal of Rehoboth’s 375th anniversary considering the many ways he helped preserve the community’s ruralism and heritage.

Dyer helped the Rehoboth Antiquarian Society build its museum and barn and served as its president for more than 20 years.

He was a charter member of the Rehoboth Historical Commission, serving for more than half a century.

In 2016, Dyer was named Rehoboth Town Historian. He was a prolific writer, penning histories of the town, the Rehoboth Congregational Church and, most importantly, “Swamp Yankee,” an acclaimed look at local farm life in the early 1900s.

But one contribution stands above else and will forever preserve Rehoboth’s rural character. A peek at his life story will explain how deeply he loved his community and how much he gave to it.

In 1949 after serving in World War II and graduating from the University of Maine, Dyer moved to the farm his family had owned since 1818.

The homestead, built in 1746, had begun to deteriorate and fields were beginning to grow up in brush, but he diligently brought the farm back to life.

Dyer found mentors in Rehoboth, wise in the ways of fields, pastures and farms.

One of these was Roy Horton, who worked in the cedar and maple swamps with teams of horses and oxen and who, like Thoreau, knew how to live a simple, natural life.

Horton taught Dyer the importance of the Squannakonk Swamp, which occupies the central part of Rehoboth. Preserving it, however, would be a daunting task because it would require finding dozens of old descriptions and deeds, researching the titles and tracing the owners of every parcel — and buying the land.

Yet Dyer, a surveyor by trade, was in a unique position to be able to do just that, albeit laboriously as a sort of avocation over the course of almost four decades.

Eventually Dyer’s son, E. Otis Dyer Jr., joined his father’s business and project. It was a labor of love for both.

They constructed a large map that covered a table in Dyer’s survey office.

Each parcel was outlined with colored pencils and filled with handwritten notes concerning the histories of ownership. By 2016, Dyer was the owner of about 450 acres.

In December 2017, Dyer donated 433 acres of those important wetlands and uplands to the Rehoboth Land Trust for permanent preservation.

It was the largest singly owned property in Rehoboth at the time and effectively tripled the land trust’s holdings; he requested that the property be named for his late friend and mentor, Roy Horton.

Like many of us, E. Otis Dyer had gifts and passions, but few have been able to use them to make such a lasting contribution to their community.

For that, Rehoboth and all of this area should be thankful.