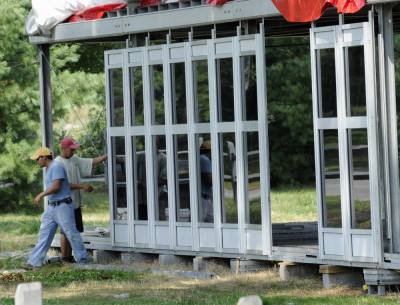 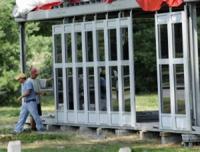 Workers construct the pavilion between the 16th and 17th holes at the TPC Boston in Norton in preparation for the annual Deutsche Bank Championship golf tournament to be held over the Labor Day weekend. The course has undergone several changes to make it more challenging for the PGA players. 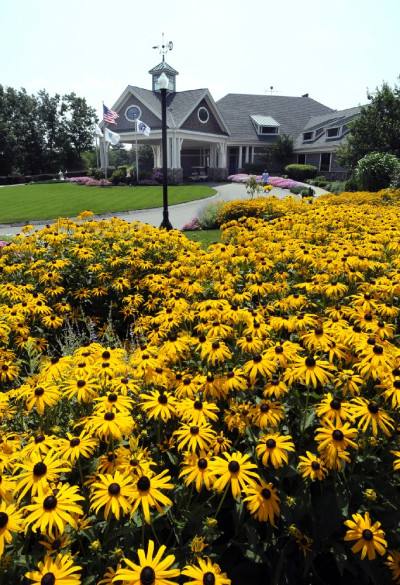 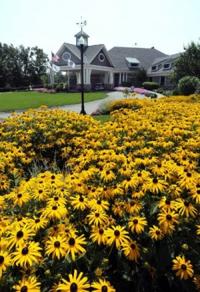 The flowers are in full bloom on the walkway leading to the TPC Boston clubhouse.

Workers construct the pavilion between the 16th and 17th holes at the TPC Boston in Norton in preparation for the annual Deutsche Bank Championship golf tournament to be held over the Labor Day weekend. The course has undergone several changes to make it more challenging for the PGA players.

The flowers are in full bloom on the walkway leading to the TPC Boston clubhouse.

"When I first got there I did not like the golf course at all," Singh said on Monday via teleconference during the tournament's annual media day. "I don't think many golfers did."

Since the 9-year-old course was redesigned prior to the 2007 tournament, Singh said he is now a big fan.

"I thought the redesign was great, incredible, and it kind of gives you good feelings to go out there and play," Singh said. "Pretty much a totally different golf course than when we first got there."

Singh shouldn't get too used to it.

Taking plans laid out by golf course architect Gil Hanse, who oversaw the 2007 makeover, TPC Boston has continued to evolve, Williams said, in the hopes of presenting a greater challenge to Singh, Tiger Woods and the rest of the world's top players when they pay their annual visit to Norton.

"The idea is not to make great visual changes or things the average fan will notice," Williams said. "What we're looking to do - and what we hope we've accomplished - is to present awkward lies that create doubts in the players' minds about their next shot."

"Subtle changes" will include reshaping the rough around several greens, particularly on the third, sixth, 14th and 17th greens, Williams said. The fescue-covered "bumps and humps" - one of the trademarks of the course since Hanse's 2007 renovation from the original Arnold Palmer design - now makes missing a green more precarious, he said.

More dramatic changes have come in the rough off the 14th and 15th fairways, Williams said.

"Those areas were fairly vanilla in the past," he said.

With the addition of deeper rough, more bumps and more fescue, "We've given the players lots more things to think about," he said.

In addition, a new tee, from a lower position, has been added on the 15th hole.

What fans can expect

For spectators, however, there will be few changes from the previous six Deutsche Bank Championships, tournament director Eric Baldwin said.

The tournament has added two new luxury box areas, he said. One of those, near the 16th tee, sold out within two weeks, he said.

Tournament week is Tuesday, Sept. 1 to Monday, Sept. 7. With its Labor Day finish, the Deutsche Bank Championship will continue to be the only PGA Tour event scheduled to finish on a Monday rather on Sunday.

Wednesday will be a practice day.

Thursday will feature the traditional pro-am.

The tournament, a part of the FedEx Cup playoffs, begins on Friday, Sept. 4 and ends on Labor Day.

One change this year is that Tuesday, Sept. 1 will be Military Appreciation Day. All active military personnel, veterans and their immediate families can receive complimentary tickets to the Red Sox pro-am and practice that day by calling 877-TIX-4DBC.

MIKE KIRBY covers golf for The Sun Chronicle. He can be reached at 508-236-0344 or at mkirby@thesunchronicle.com.