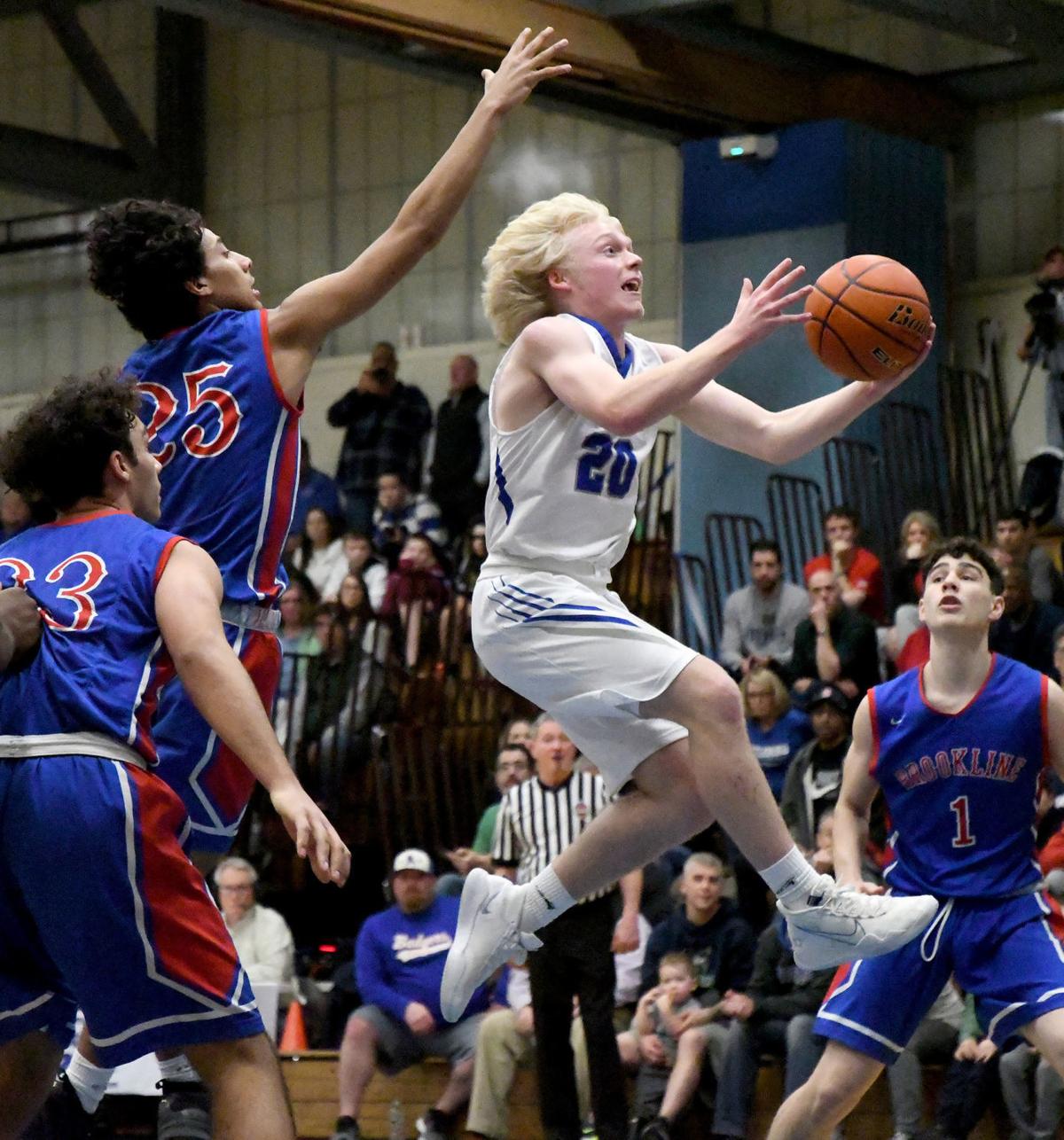 Attleboro High’s Nick McMahon soars through a trio of Brookline High defenders for a layup in their MIAA Division 1 South Sectional first-round game in late February in Attleboro. 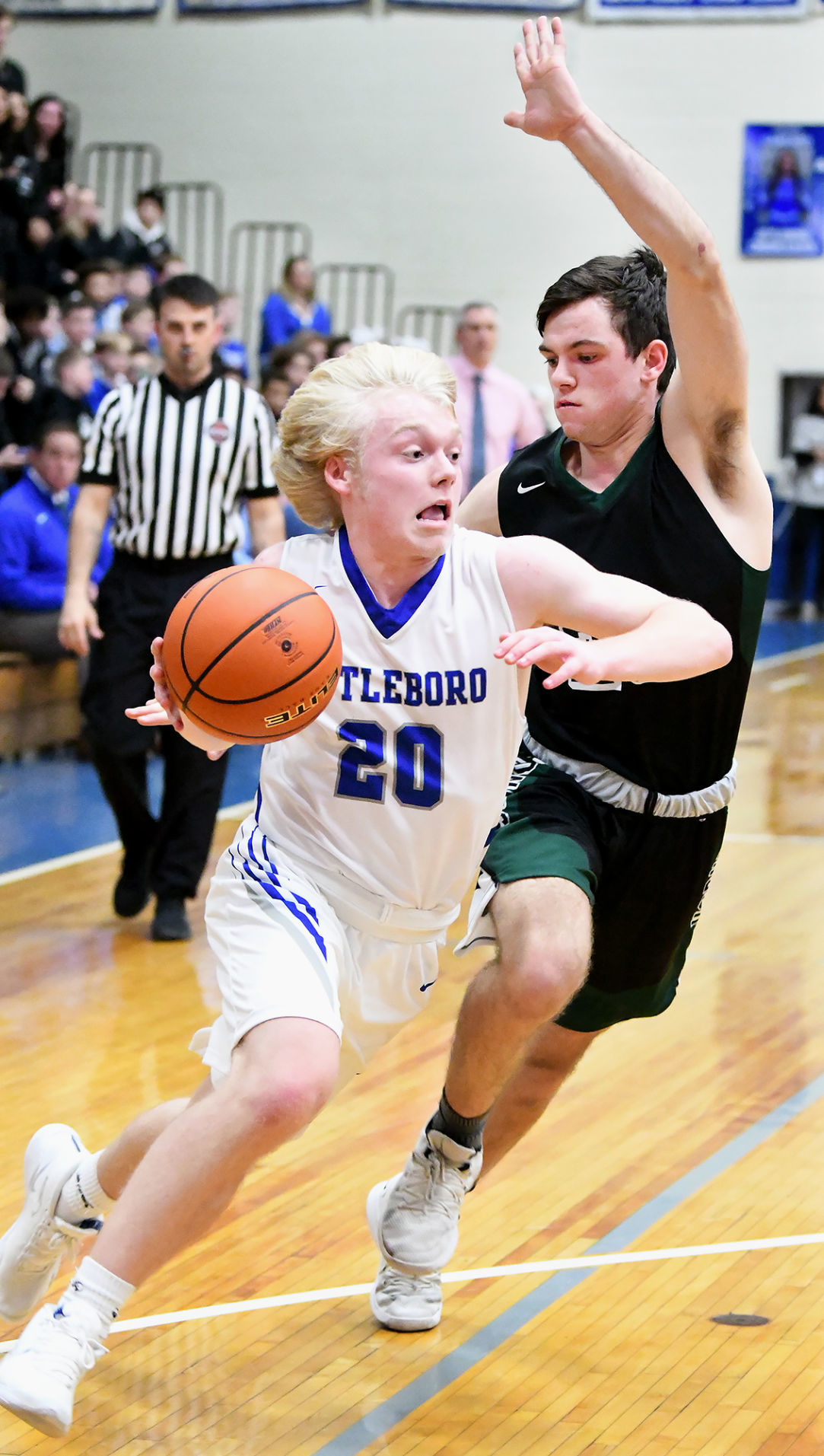 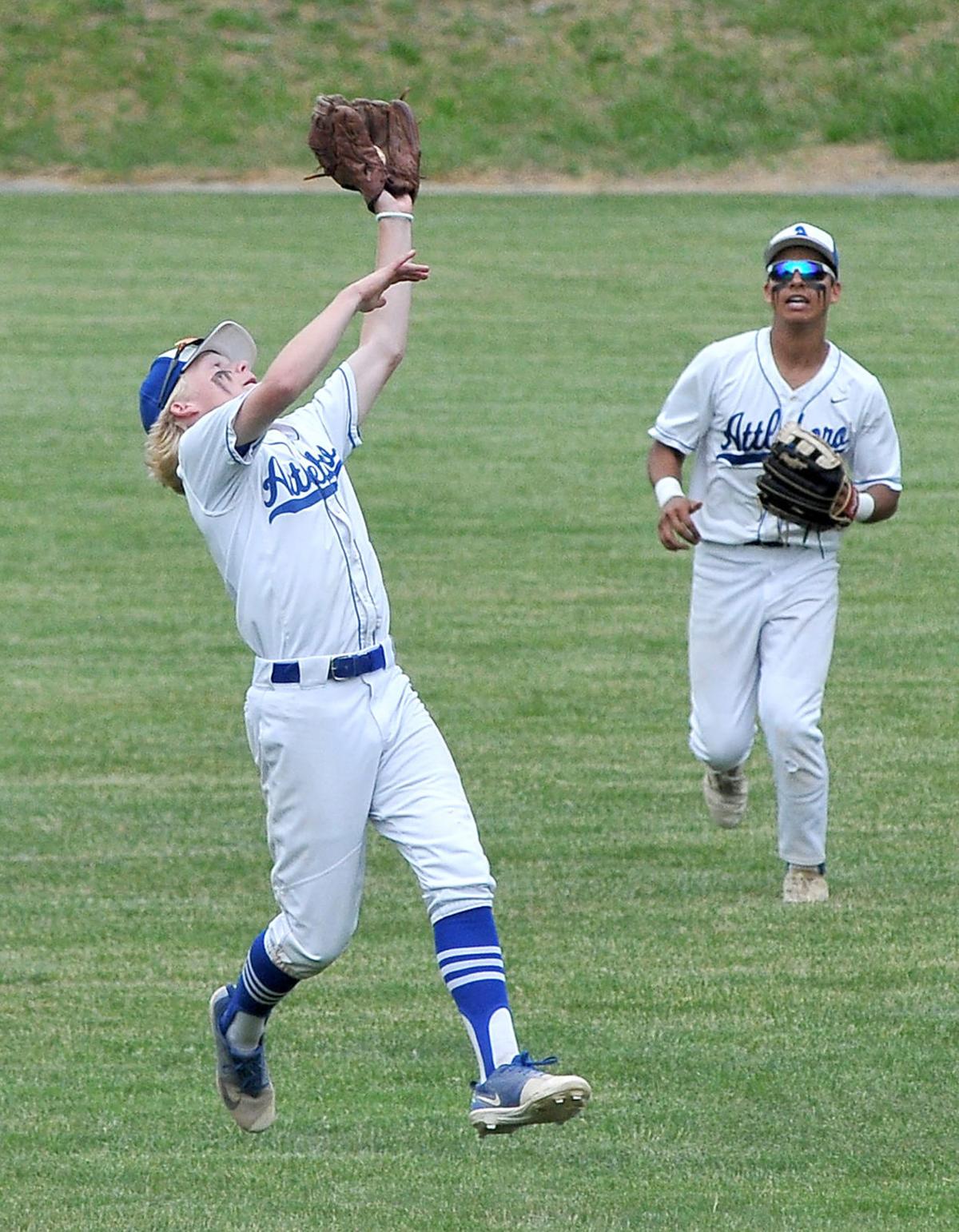 Attleboro High’s Nick McMahon makes a one-handed catch of an infield fly against Bridgewatyer-Raynham Regional High during their MIAA Div. 1 South quarterfinal in June 2019 in Attleboro.

Attleboro High’s Nick McMahon soars through a trio of Brookline High defenders for a layup in their MIAA Division 1 South Sectional first-round game in late February in Attleboro.

Attleboro High’s Nick McMahon makes a one-handed catch of an infield fly against Bridgewatyer-Raynham Regional High during their MIAA Div. 1 South quarterfinal in June 2019 in Attleboro.

ATLEBORO — The numbers have almost always added up for Nick McMahon.

Either on the baseball field where he has positioned himself at no less than eight spots — exclusive of catcher — for the Bombardiers of Attleboro High over four seasons in the program.

Or either as the point guard, off-guard, ball-hawking defensive grinder, the knack for taking down rebounds in traffic as a member of the Bombardier basketball program.

But most of all in the classroom, where McMahon has distinguished himself as a member of the National Honor Society and Attleboro High’s Hockomock League Male Student-Athlete of the Year.

The numbers add up very well academically, ranking him among the top 25 members of the senior class with such an outstanding grade index and recommendations from all walks of life through the corridors at Attleboro High that he will continue to study the numbers, as a mathematics major at the University of Connecticut.

“I just picked up concepts in math,” McMahon said of his academic interests, taking a statistics course this year. “Some concepts in math I have a lot of interest in and I had a lot of fun with statistics. I know that I’m good at math, I like math and that’s something I want to guide me somewhere.”

That aptitude, along with clever hands and feet, carried McMahon to feats unimaginable in the athletic arena at Attleboro High.

McMahon had a most memorable senior season on the basketball floor, unbeknownst to him that his last game as a Bombardier occurred in one of the greatest games in AHS hoop history, at Mansfield High’s James Albertini Gymnasium against the No. 1-seeded, eventual Division I South Tournament titlist Hornets.

The game was the last of McMahon’s AHS athletic career, a 54-52 setback, with the outcome hanging in balance as Hockomock League MVP and senior teammate Bryant Ciccio’s potential game-winning shot from mid-court had the perfect rotation, length and arc, only to fall off the back of the rim.

The Bombardier senior guard had a terrific assist-to-turnover ratio (121-49), while having a dazzling shooting accuracy rate – 50 percent from the floor, 53 percent (19 made) on 3-pointers.

“He was an impact player for us,” Mark Houle, the AHS basketball coach said, as McMahon served as point guard this season to allow Ciccio to play the off-guard position. McMahon averaged six points and four rebounds per game. “He has a great passion to compete,” added the Bombardier coach.

And it was nearly as memorable a journey in his last baseball season as a Bombardier at AHS in 2019, as the No. 11 seed among 14 teams in the field for the MIAA Division 1 South Tournament advanced all the way to the title game, eventually losing to state champion Taunton.

Tending to duties at second base, third base and shortstop, along with an occasional call for his arm to the mound to pitch, McMahon and the Bombardiers won 14 games — staging an upset of No. 6-seeded Barnstable on the road, upstaging Bridgewater-Raynham 8-7 in a dynamic near-three-hour topsy-turvy tussel in the quarterfinal round at Hayward Field, and then not only stunning, but blanking No. 2-seeded Durfee in the semifinals.

“It was hard to get accustomed to,” McMahon said of the on-line learning process for students at AHS during these pandemic times. “I find myself thinking that I actually appreciate my teachers a whole lot more through this.”

McMahon’s affinity for UConn is a natural, in that he was born and raised in East Haddam, just outside of New Haven and next door to Quinnipiac University.

McMahon admits his rapport athletically is with baseball. He followed the same path through his career with the Bombardiers, first as a freshman, then with the junior varsity as a sophomore, with some minutes and innings of varsity exposure.

“Last year with Coach (Steve) Dunlea coming in, it was such a loose (baseball) team, he gave us so much freedom,” McMahon said. “I’ve never had so much fun on the bench (between innings); everybody was cheering each other on. That was one of the most fun times playing any sport ever,” he added of the postseason surge to the Division 1 South championship game.

“And basketball, the seniors (Tim Callahan, Qualeem Charles, Jason Weir, Ciccio) who graduated with me, that’s like our eighth year together,” McMahon said. “They were the most unselfish players. They’re not only great teammates, but great kids too.”

It will be forever etched in McMahon’s exiting the locker room at Mansfield High for the Division 1 South Basketball Tournament game and looking up into the stands and viewing an army of Attleboro High Bombardier Blue in support.

“That was crazy, it was a sea of blue all the way down the bleachers,” McMahon said. “I was behind Ciccio, and that (potential game-winning) shot was on line the whole way!

“It’s been an amazing career, it hasn’t always been easy.” Over the past three seasons, McMahon and the Bombardier basketball team won 48 games, with the baseball team winning 29.

“To be honest, it’s hard to keep motivation; sometimes you have to force yourself to do the (academic) work,” McMahon said, citing the rigors and time demands during the basketball and baseball seasons, with the road games cutting into his research, homework and study schedules.

“I have a lot of friends who are serious about their academics, about their grades,” McMahon added. “Especially my teammates – there are lot of smart guys out there playing basketball – this (Athlete of the Year award) could have gone to any of them. They’re athletically and intellectually gifted as I am, if not more so.”