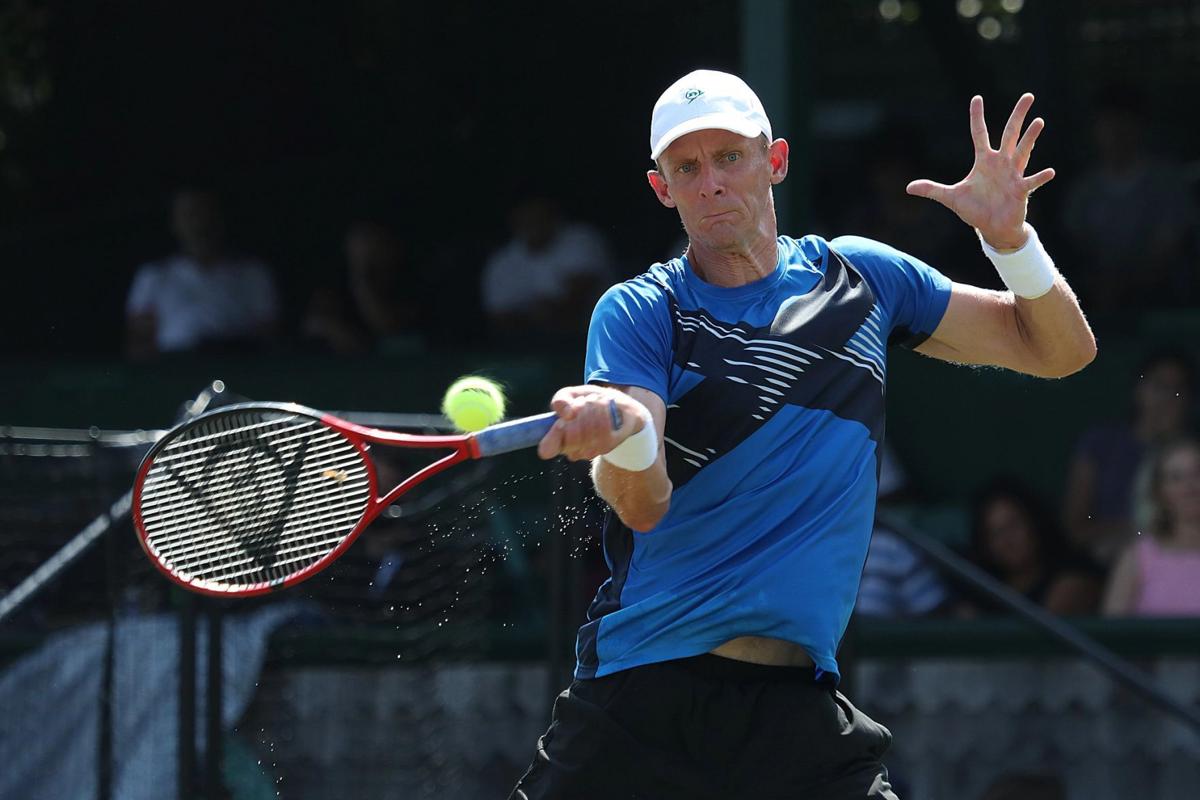 Kevin Anderson in action against Jenson Brooksby during their singles finals match on stadium court at the Hall of Fame Open on Sunday in Newport. 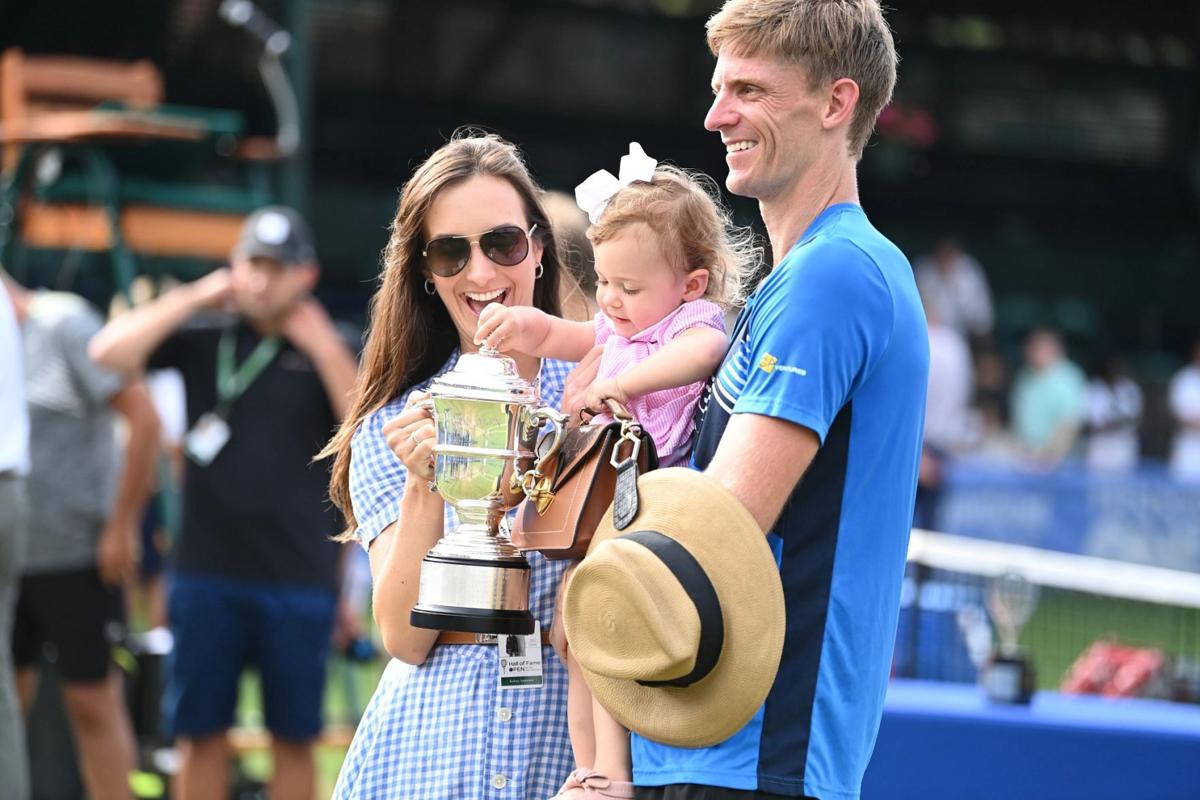 Kevin Anderson poses with the champion’s trophy alongside his wife, Kelsey, and daughter, Keira, following his singles finals match win against Jenson Brooksby on stadium court at the Hall of Fame Open on Sunday in Newport.

Kevin Anderson in action against Jenson Brooksby during their singles finals match on stadium court at the Hall of Fame Open on Sunday in Newport.

Kevin Anderson poses with the champion’s trophy alongside his wife, Kelsey, and daughter, Keira, following his singles finals match win against Jenson Brooksby on stadium court at the Hall of Fame Open on Sunday in Newport.

NEWPORT — At 35 years of age, Kevin Anderson is not about to toss the towel in on a career that began in 2007 and that has spanned all corners of the continent and a top-10 worldwide ranking.

The affable South African native, who groomed his game at the University of Illinois and now calls Gulf Stream, Florida, home has a 346-241 record on the ATP Tour, including a 75-46 record in Grand Slam events.

“I found my rhythm again. It’s about paying attention to what I’m trying to do,” Anderson said after venturing to his 20th career title match, taking a marathon 2:11, 161-point 7-6 (8), 6-4 victory over 20-year-old Californian Jenson Brooksby Sunday for the Tennis Hall of Fame Championship.

“I’m excited about things to come, I’m motivated to keep it going,” Anderson said after uncorking 16 aces, winning 81 percent of his first serves (44-for-54) and saving all three break points faced to take his fifth win of the week on grass.

“It’s been a tough run; it’s such a great step forward for me,” Anderson said. He saved two break points in the seventh game of the first set to hold a 4-3 lead and then overcame a 5-2 deficit in the tiebreaker. Anderson uncorked a terrific return and forehand winner to knot the score at 5-5, smacked another forehand winner to tie the score at 8-8, and served an ace to take a 9-8 edge. Then he deposited a backhand winner to take the set.

Anderson underwent ankle surgery in 2016 and right knee surgeries in September 2019 and again in February 2020, in addition to right shoulder and right elbow inflammation.

“I do everything I can from a physical standpoint, most things I have under control,” Anderson said. “Last year, I was a little unlucky, I picked up a couple of injuries that were nothing that I had before. That’s probably going to happen.”

Anderson had lost first-round matches at Eastbourne and Nottingham (England) as well as the French Open.

“Even though my results weren’t amazing, I took quite a lot from it, just the way that I was hitting the ball as well as I ever have,” Anderson added. “The last several weeks, it was not playing the way that I wanted, just not finding that same form on the match courts.

“I’m trying to get more matches under my belt, this is what I’m looking for in terms of where I am and where I set my sights.”

In the second set, Anderson gained a service break in the very first game, uncorked three aces on his service game in the very next game, and then lost just six points on his next four service games to close out the match.

Anderson won his seventh title, his first since 2019, and took home the Jimmy VanAlen Cup along with a $45,795 paycheck. Brooksby (32-6 overall in all competitions this season) added $32,835 to his financial statement.

Anderson is the fifth-oldest finalist at Newport, with 42-year-old Ivo Karlovic holding three of those spots.

The 6-foot-8 Anderson played for the Fightin’ Illini (2005-07) and has since played in 724 professional matches at the ATP and Challenger levels.

The former world-ranked No. 5 (in 2018 and now No. 113) said, “I’ve worked a long time to be back in a final, so it means a lot. Every player has their expectations on where they feel they fit in.”

After Wimbledon (a second-round loss to Novak Dojkovic), “I saw that I wasn’t going to be in the main draw of the U.S. Open,” Anderson said of his ranking.

As fate would have it, Tennis Hall of Fame CEO Todd Martin extended a wild-card invitation to him and he was granted a No. 8 seed. He staged a two-hour, 43-minute upset of world No. 37, No. 1-seeded Alexander Bublik in the semifinals.

“There’s never any easy matches, but quite a few of the matches that I’ve played this year were mine to win,” Anderson said. “Here I’ve been taking steps in the right direction.

“I knew that I had to make the semis in order to reach the main draw (of the U.S. Open). That was the first step; I’m thankful that they were kind enough to give me a wild card.”

Anderson had, without question, worked long and hard to reach the title match — twice overcoming one-set deficits to win (over Jack Sock in the quarterfinals and Bublik), saving 11 of 16 break points and uncorking 74 aces (with just 13 double faults) over his first four matches.

And Anderson had won an amazing 85 percent (161 of 190) first-service points through that span.

The 6-foot-4 Brooksby was the second-youngest finalist in the event’s 45-year history after 19-year-old Greg Rusedski reached the 1993 final. Three ATP Challenger titles in 2021 rocketed Brooksby up the rankings ladder to No. 152 in just six months. Through five matches in his first grass-court tournament ever, Brooksby double-faulted just twice and saved 14 of 21 break points.

The last time Anderson played in Newport, he was 22 years old and just one year out of the University of Illinois. “Being here in Newport and seeing the history of the museum, the history of tennis here (dating back to 1881) and everything, this is special to me.

“It’s not going to happen overnight; the weapons I bring to the court are still there. I’m looking forward to making my way back up there.”