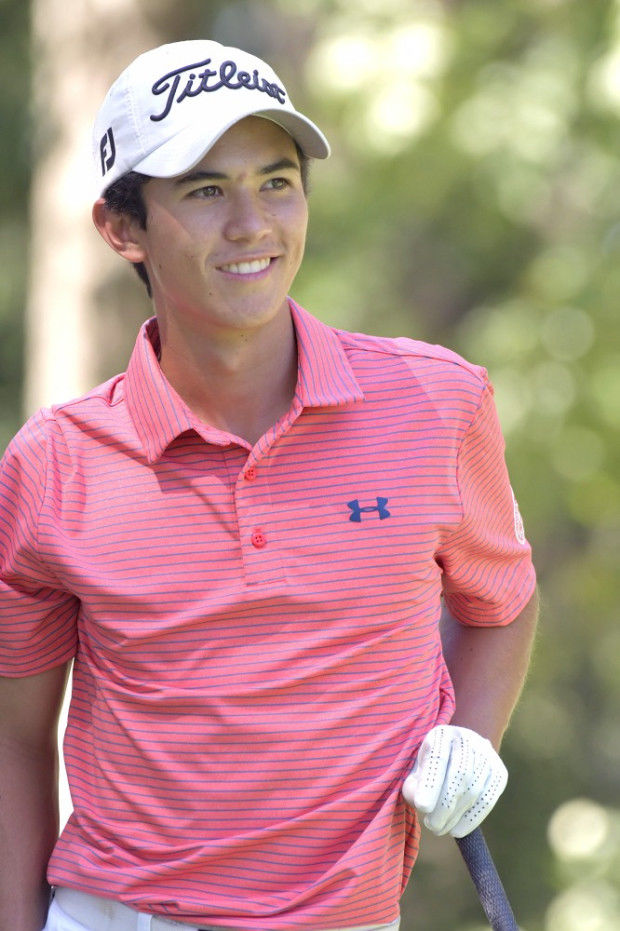 Davis Chatfield was all smiles last August after winning the 2016 AAGA Champion by 16 strokes. For more photos from the tournament, go to www.thesunchronicle.com/gallery/staff. 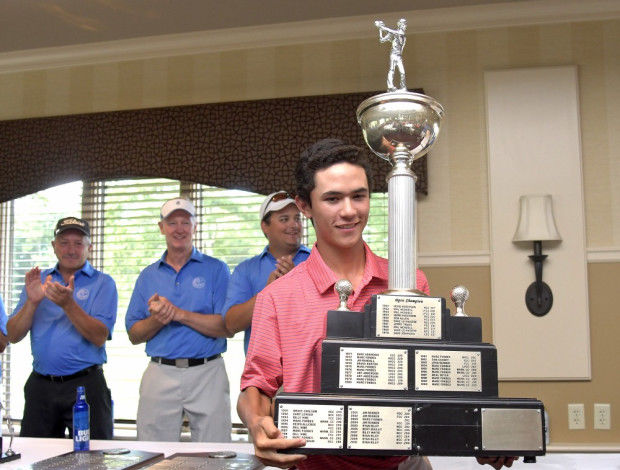 Davis Chatfield on Sunday captured the AAGA Open title for the second year in a row.

Davis Chatfield was all smiles last August after winning the 2016 AAGA Champion by 16 strokes. For more photos from the tournament, go to www.thesunchronicle.com/gallery/staff.

Davis Chatfield on Sunday captured the AAGA Open title for the second year in a row.

No one truly knows what the future may hold, but most everyone familiar with local golf understands that Davis Chatfield probably won't be around these parts long enough to win 16 Attleboro Area Golf Association Championship Tournaments.

The 17-year-old Bishop Feehan High School senior-to-be, already with two of the most impressive AAGA Open victories of all time in his back pocket, will be off to the University of Notre Dame next year at this time. And there's the little matter of the U.S. Amateur Championships, always conducted on the same weekend as the AAGA Open, in which Chatfield hopes to participate.

And after all that? The world may be his oyster if he continues the meteoric rise through the levels of the game that he's displayed since finishing in a tie for 17th (32 strokes behind winner Chris Congdon) as a 14-year-old playing in the 2013 Open.

"I'm not sure when the next time I'll be here is," Chatfield said Sunday after his triumphant tour of Foxborough Country Club. "I do hope it works out next year ... (the U.S. Amateur) is always in the back of my mind, but I always love playing in this tournament."

Even if Chatfield's reign may be relatively brief, fans of local golf will always see it as a bright, shining moment for their favorite game.

Chatfield emerged Sunday with a 16-stroke victory over his closest pursuer, Adam Bourque - second only in tournament history to the 18-stroke margin posted by current Web.com Tour pro Jim Renner in 2004.

The diminutive youngster toured the four AAGA courses like a giant, finishing 7-under-par 277, just two strokes higher than his co-record (with Congdon) winning score last year - and, as the four-day par total increased by a stroke this year with the substitution of par-71 Wentworth Hills Country Club in Plainville for the shuttered par-70 Locust Valley Golf Course, he was basically only a single stroke off last year's pace.

He marched through Foxborough in 3-under 69 - and the funny thing is, he really didn't turn on the jets until after posting an unexpected bogey at the start of the back nine, breaking a string of nine straight pars.

"I really wanted to shoot in the 60s today, that was my goal," he said. "I knew after the bogey on 10, I had to take it up. So I got it back quickly on 11 and then played well the last four holes."

One can't fault Chatfield for playing conservatively at the start. He entered the day with an eight-stroke lead over older brother Brett Chatfield, and it could be said that his four-birdie front nine at Norton Country Club on Saturday had already put an end to any possible challenges for the championship.

So he did nothing to jeopardize the lead. He hit straight and putted well, and while he may not have been as accurate reaching the greens as he had been a day earlier, he didn't need to be. His brother fell to 12 strokes back at the turn, Bourque was 13 back, and only Eric Marchetti in the next-to-last group maintained some sort of pursuit at 11 strokes behind before falling off the pace midway through the back nine.

On the par 4, 419-yard 10th hole, Chatfield's second shot sat in the approach to the elongated and undulating green, facing a challenging pin placement close to the right-side fringe. His 50-foot putt from the front fringe rolled about 8 feet beyond the pin, and the come-backer slid past the cup. It was just his second bogey in the last two days.

But on the par 5, 565-yard 11th, Chatfield put his third shot within 4 feet of the cup for an easy birdie to get the lost stroke back. It was like a replenishment of the competitive juices, he said.

After three more pars, he closed with birdies on three of the last four holes. He played the treacherous 16th hole - a par 4, 437-yarder with a wicked dogleg to the left overlooking a postage-stamp green guarded by a hazard - as perfectly as possible, hitting to the center of the bend from the tee and then putting his approach shot just 6 feet below the pin. He even saved a par 3 on No. 17 by blasting a wedge from the right-side fringe off the pin, leaving a 2-inch putt.

One inch or two to either side of the pin, and that shot may have ended up in a cart path on the other side of the green. "It had a little steam on it," Chatfield admitted. But that's how things go when the golf gods are smiling down upon you.

Chatfield's masterful finish practically erased the memories of his struggling start on Thursday, a 4-over 75 over the unfamiliar layout of Wentworth Hills, a late replacement for Locust Valley. That underscored the unique challenge of the AAGA Open, where competitors have to master the quirks and nuances of four different courses in four days.

"They're all four completely different courses," he said. "And you've got to adapt to that and note that everybody's playing the same courses. You've just got to fight through it."

It was a fight he won with ease.

MARK FARINELLA may be reached at 508-236-0315 or via email at mfarinel@thesunchronicle.com.