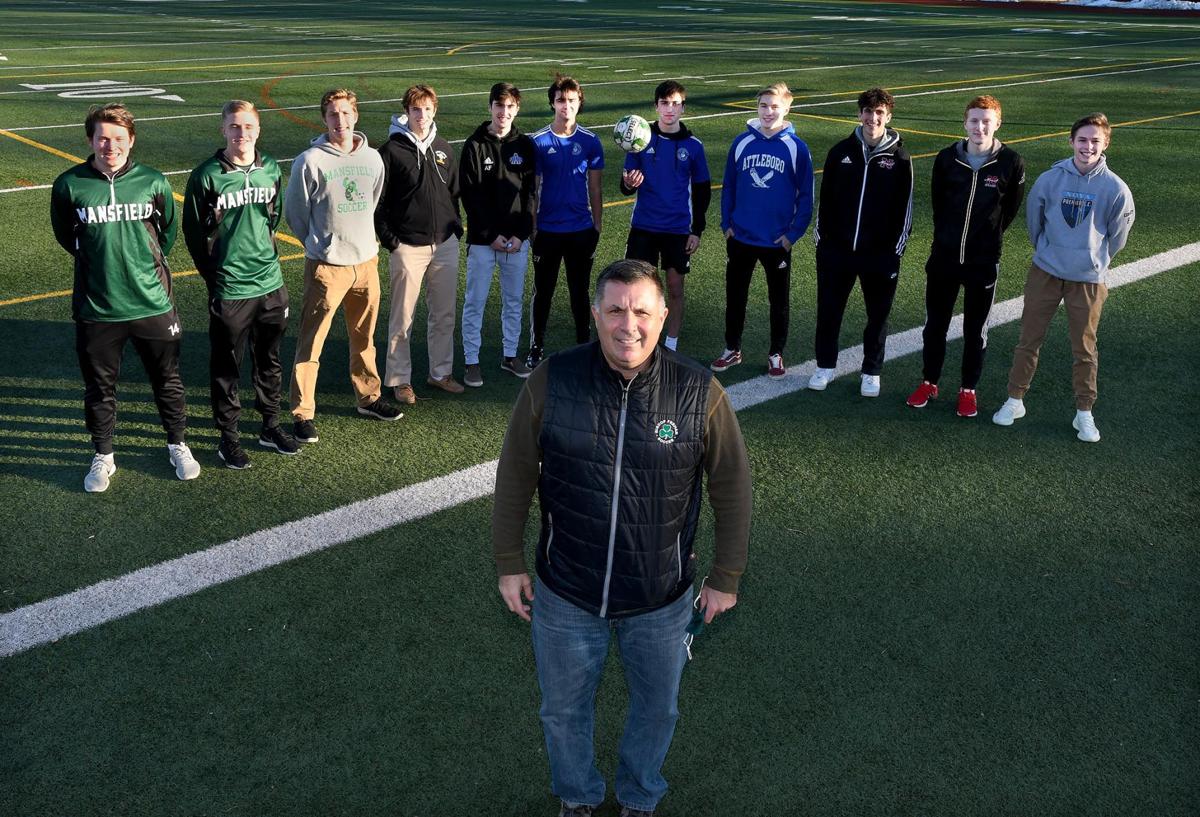 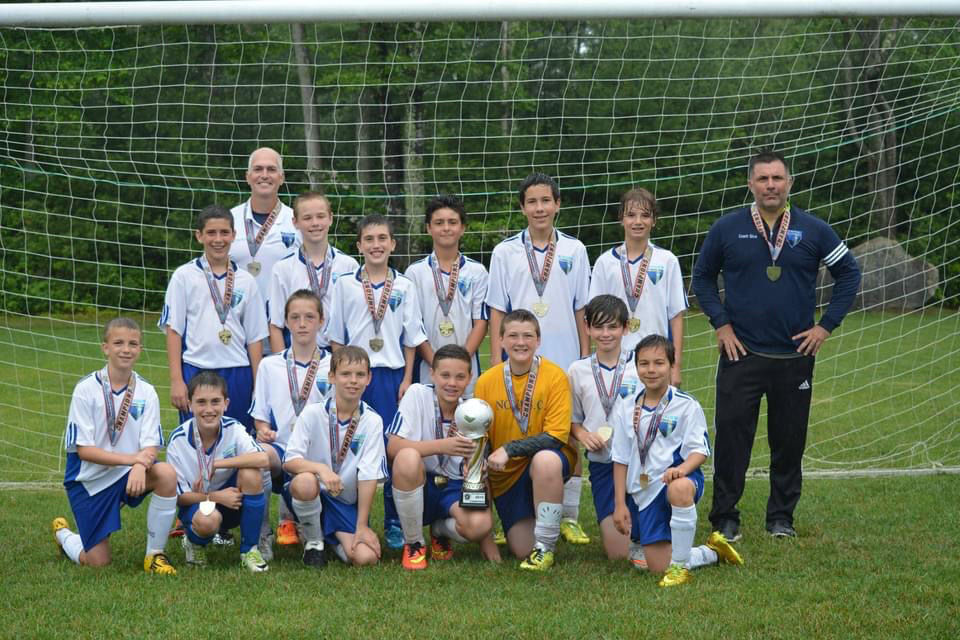 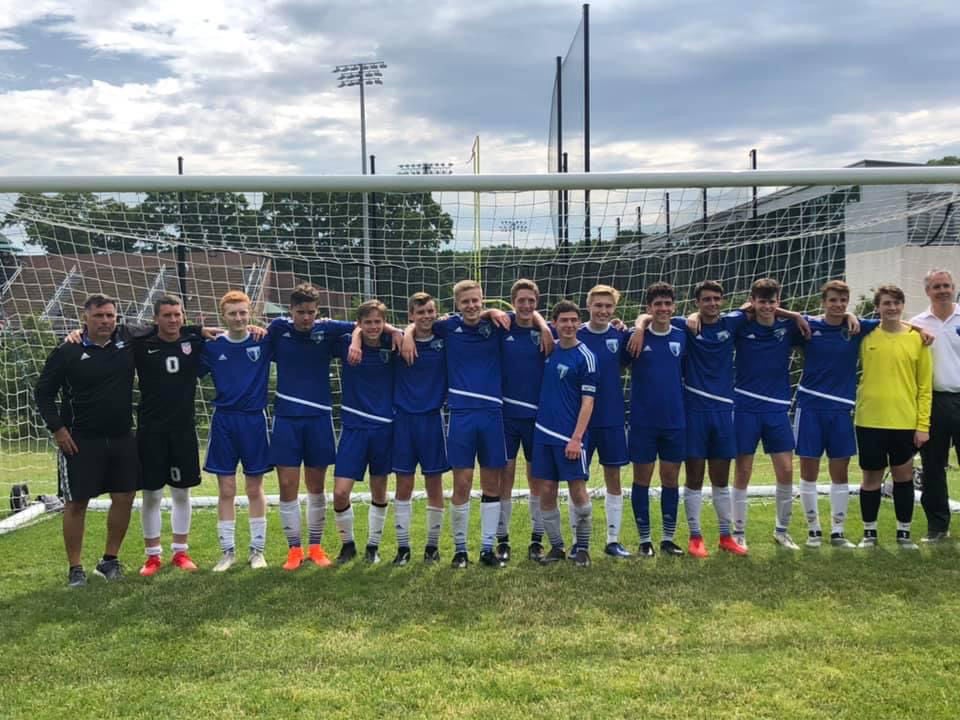 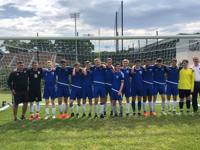 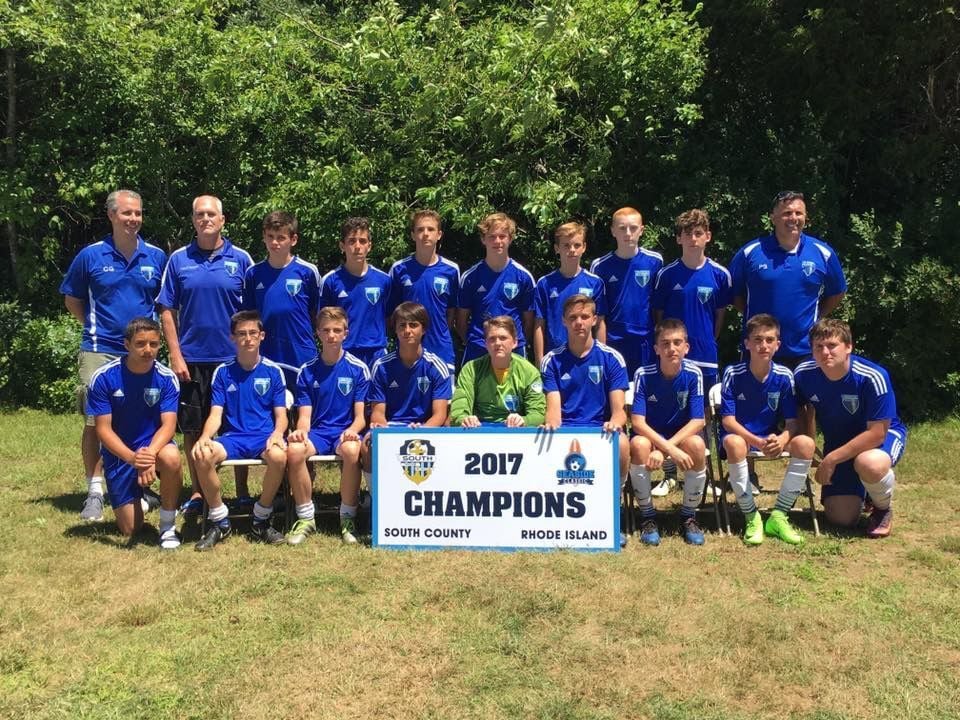 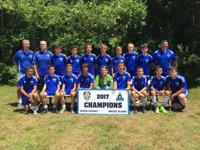 A picture of the team at the 2017 Seaside Classic Champions in Ninigret Park. 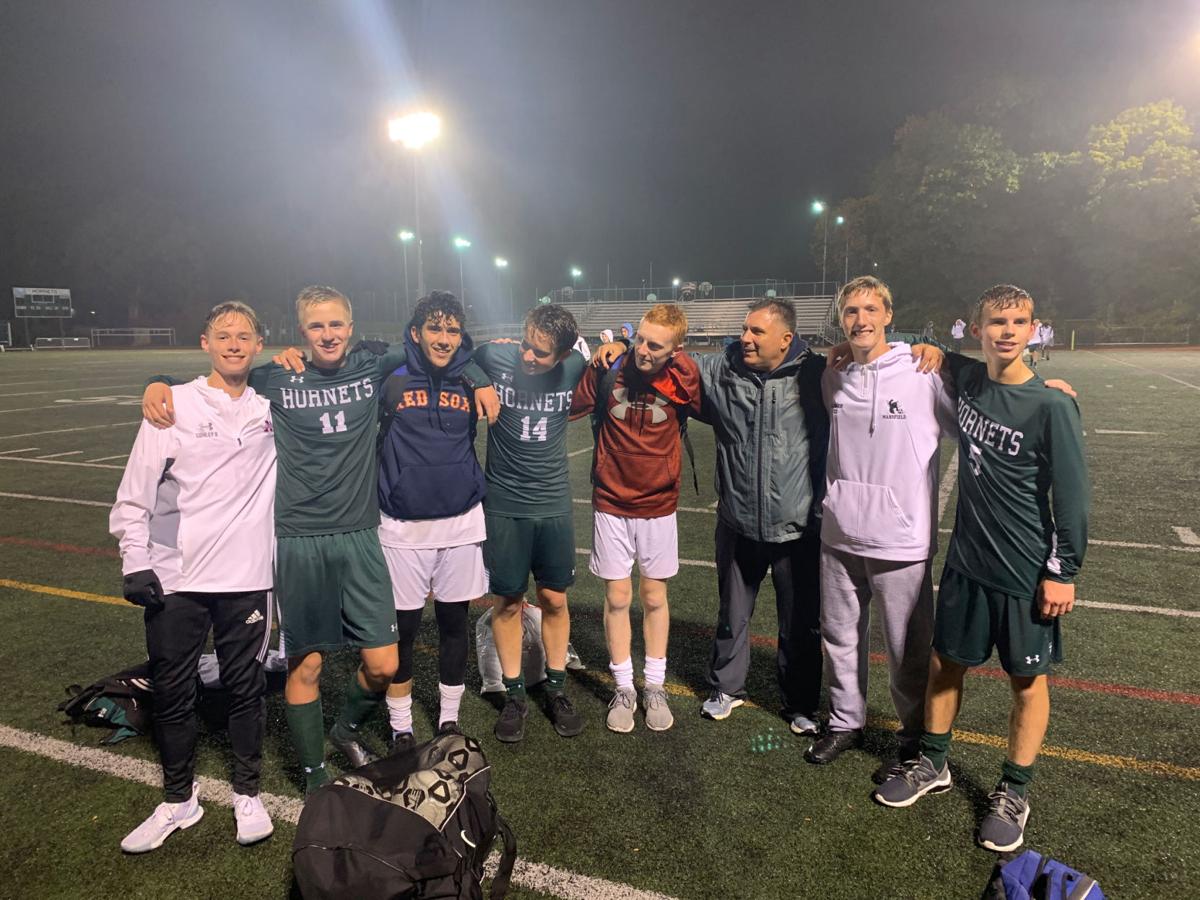 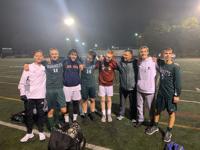 NOVA players from Mansfield and North Attleboro after a game in 2019. Pictured are Eames, Scholes, True, Elsner, Silva, Carter and Conley. 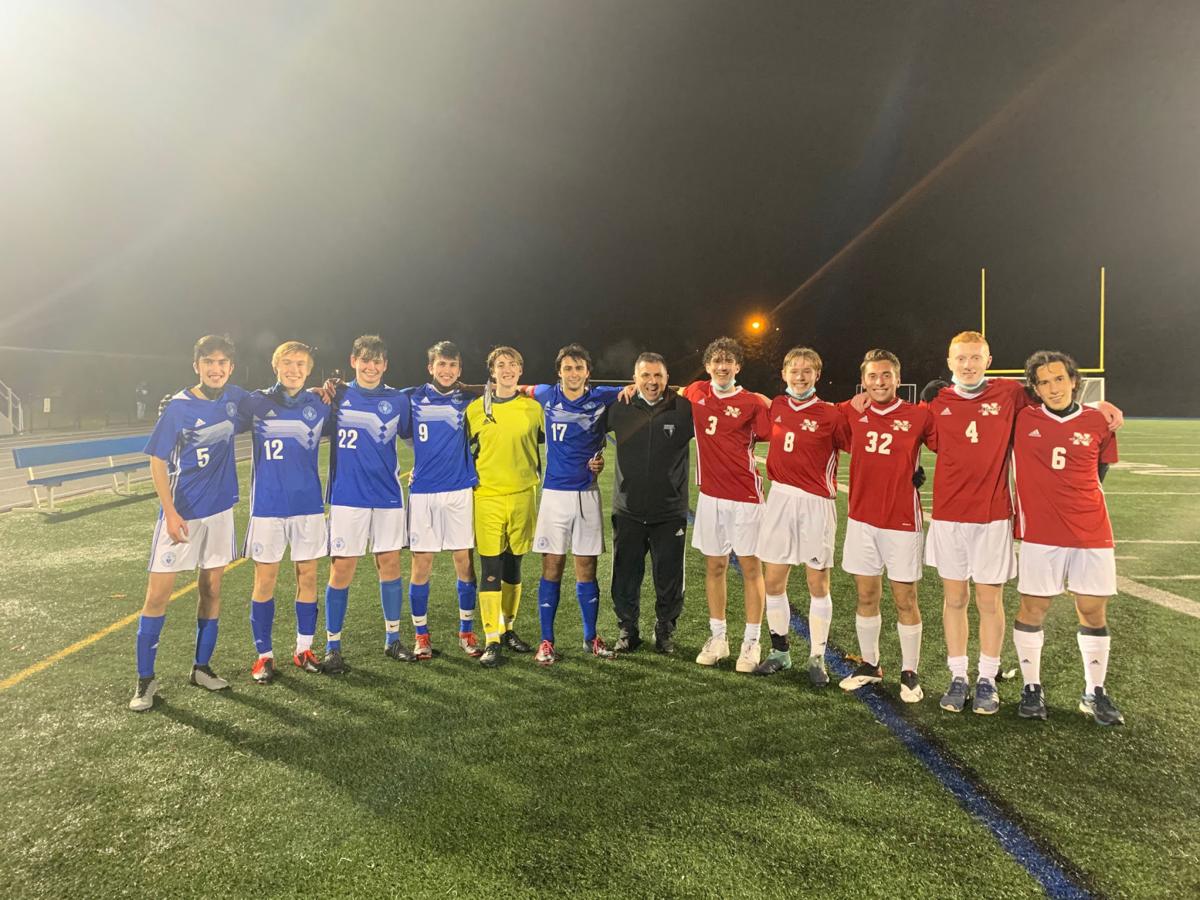 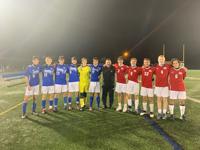 A picture of the team at the 2017 Seaside Classic Champions in Ninigret Park.

NOVA players from Mansfield and North Attleboro after a game in 2019. Pictured are Eames, Scholes, True, Elsner, Silva, Carter and Conley.

The friendships had been cultivated between teammates of the NOVA 2002 18-and-under boys’ soccer team long before the soccer club stepped onto the field for the Father’s Day Showcase Tournament at Bryant University in June 2019.

The NOVA team took home the title that weekend, but as fate would find itself onto the soccer pitch, those players from Attleboro, Mansfield, North Attleboro and Bishop Feehan high schools never assembled again.

The 2019 fall high school seasons began, the winter developmental leagues commenced and then the coronavirus took them all off of the field ending the weekend club soccer camaraderie among the Bombardiers, Hornets, Rocketeers and Shamrocks.

But even though they weren’t playing, their friendships remained. Especially for the high school seniors in the program, those friendships are what has driven and guided them through a tumultuous final year.

The NOVA 18-and-under team has created more friendships than the number of wins will ever replace.

Phil Silva, the NOVA coach who also coached the Bishop Feehan’s girls’ soccer team to the 2019 Division 1 State Tournament title, started coaching in the NOVA program at the urging of Tony Longo, whose daughters played at Bishop Feehan. Prior to that, Silva was content to be a parent and fan, watching his son Justin play.

After two weeks, NOVA coach Carlos Costa asked him to become an assistant coach. Shortly thereafter, due to the number of boys in the program, the team was split into two age groups.

For the next five seasons, the NOVA team traveled extensively throughout New England for fall, spring and summer tournaments, and also to New York, New Jersey and Florida. In 2018, the NOVA team advanced to the Mass. Cup State Championship match, bowing 1-0 to the defending state champions.

“It has been a great deal of fun, and I have built lasting friendships with many of the parents including Lynee Conley, our team manager, and our assistants, Bill Fasoldt and Chris Giuliano,” Silva said.

“One of the most enjoyable experiences in my coaching career was watching this group of kids grow up and obviously being able to enjoy so much time with my son Justin over the years,” Silva said “ I can’t tell you how much those trips meant to me and the connection he and I share because of that experience together.”

His pride in his players runs deep and shines through.

“I was so proud of the fact that so many of those kids went on to become captains of their high school teams,” he said. “I challenged them, their character. We played in tough pools (of competition) and that made them mentally stronger. They didn’t shy away from a challenge. They were fearless playing against anybody and that reflected when they played for their high school teams.

“As much as winning, that’s important – we created players with character as well.”

Soucy, the Attleboro High senior captain and team MVP, firmly believes he would not be the player and leader he has become without the support of the NOVA program.

“It kind of came naturally to me,” Soucy said of gaining confidence in himself to lend support to his teammates. “We’re all friends; we started playing together in fifth or sixth grade. Even though they were all from other towns, you got to know them personally and realized that they weren’t just your rivals. We were all on the same team and we all had the same goals.”

In addition to some 20 high school matches during a normal fall season, there would be a dozen or so winter league matches, then another two dozen or so spring matches and two dozen more through the course of the summer tournament schedule.

“Playing in so many tournaments as we have, it’s kind of eye-opening when you see such talent out there,” Soucy said. “You learn what you have to do to become a better player. All of my teammates are all good guys!”

Soucy has been a striker and attacking midfielder throughout his career.

“Everyone had their own styles when they got into the NOVA program,” he said. “I was mostly a striker coming out of the Attleboro Youth League.”

His sister Ali Soucy played soccer at AHS and his dad David is a product of Apponequet High School.

“Soccer has always been in our family blood,” the Emmanuel College-bound Soucy said. “Baseball got kind of boring for me. With soccer, the ball is always moving and you have to be ready.”

The Villanova University-bound Eames captained the Mansfield High Hornets this season and confirms that he might not be the leader he is today without the hours spent practicing and playing with his NOVA teammates.

“When I first started playing with NOVA, I knew the Mansfield kids, but not all of the other kids,” Eames recalled. “Over time, those friendships developed. I got to know everyone individually. You realized that they all had different personalities. It was nice to play against them in high school.”

At Mansfield, Eames has been a three-year varsity veteran, a two-year starter playing at inside and outside midfield spots and at striker. This season he moved to a center back, defensive role. With NOVA, Eames was almost exclusively a center midfielder, the ultimate transitional player, the one through which most of the play is funneled. “That’s where I like to play, but I’ll play anywhere,” Eames said.

“Starting with NOVA we were all the same age and at pretty much the same skill level,” Eames added. “So you get to know each one’s tendencies, how to communicate with them. I shifted that over to Mansfield over the last two years where I was one of the older, more experienced players. I brought that over, how to communicate and lead in an effective way.”

NOVA definitely aided Eames in his leadership role on the field, directing the pace and flow of play, guiding teammates and underclassmen.

“I was always very competitive having three older brothers (Brad and Connor played soccer at Mansfield High along with Tom, a Hornet golfer) and I was competitive in other sports,” he said. “Soccer was the one thing that I kept with and kept me going.”

Giuliano, of North Attleboro, is one of the Bishop Feehan captains as well, a holding midfielder with the Shamrocks and with NOVA.

“Playing in that position and with NOVA definitely helped me communicate more,” Giuliano said. “I’ve played with the kids at Bishop Feehan last year, so I knew how to lead them.”

Giuliano’s dad Chris played soccer at Foxboro High and his sister Clara is a prominent member of the North Attleboro High girls’ soccer team. Giuliano played some basketball growing up, but soccer was his calling and the game plan is to play collegiately at Sarah Lawrence College.

“Soccer was definitely a family thing,” Giuliano added. “NOVA actually kept me in the sport because I was in third or fourth grade, and I had asked my parents if I could play Pop Warner football. They would have rather have me play soccer instead of football.”

Giuliano said he’s close to all the kids on the NOVA team.

“It’s like a family,” Giuliano said of the new friends and teammates he has acquired over the past half-dozen or so years. “A lot of these guys, I just knew from soccer at first, and then I really got to know them. Some of these guys will be my friends for life.”

Justin Silva has been a four-year varsity veteran at North Attleboro High, a senior captain who has played at every position except in goal for the Big Red, an All-Eastern Mass. Coaches Association selection. But he, too, marvels at the maturity that he has gained by being around Bombardiers, Shamrocks and Hornets and playing with the NOVA program.

“Since middle school we’ve all been together as a team, we all became friends pretty quickly,” Silva said of his relationships on and off the field. “Even though they were Rocketeers and Hornets and Bombardiers, guys you probably wouldn’t like because you competed against them, we all ended up liking each other. They’ve become my closest friends now.”

Silva has played at center back and defensive midfield for most of his career.

“Soccer clicked for me compared to other sports,” he said, having played for his dad in youth teams. “I realized that if I put in the work I could get good at it.”

“Playing with those guys makes you want to become friends with people that you probably wouldn’t,” he said.

“It’s been awesome playing with the same bunch of guys for five, six years now,” he said. “We’ve played everywhere. Playing in all of those tournaments really helps you develop as a player. We’ve never been the most technical team, but we’d always go up against the best teams that we could, teams that were probably better than us. We had to be a hard-working, gritty team – we had to grind out games.”

“Soccer has given me so much, it’s proven that you have to have dedication. Soccer teaches you how to work with other people and also leadership, being captain of my high school team. You learn how to deal with people and how people don’t always respond the same way. Other kids might be rivals, but then you realize that they’re just like you — — they become your best friends. You learn a bunch of life skills through soccer.”

Giuliano and Silva have become members of the Boston-based Juventus Academy winter program.

Phil Silva said he has a lot to be proud of with this team.

“In many ways, it has been some of the coaching I am most proud of,” he said. “I don’t know if we were the most talented group of players and coaches but they played with an unbelievable amount of passion.

“If we judge people on their character, their growth as individuals, and their friendships, this team will always be champions.”