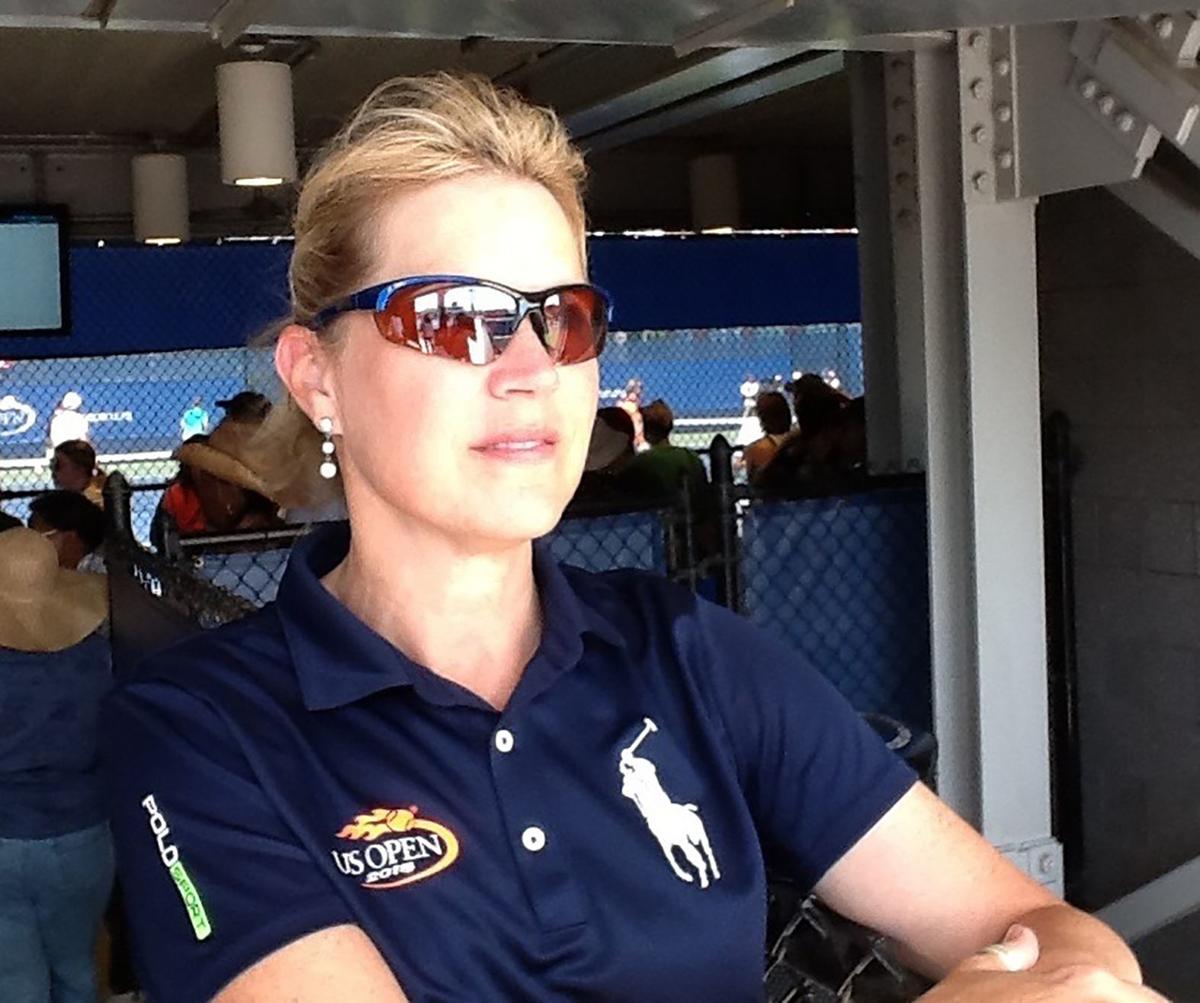 Beverly Helton has worked all of pro tennis’ Grand Slam events as either a line judge or as a chair umpire in addition to serving the U.S. Tennis Association’s New England chapter. 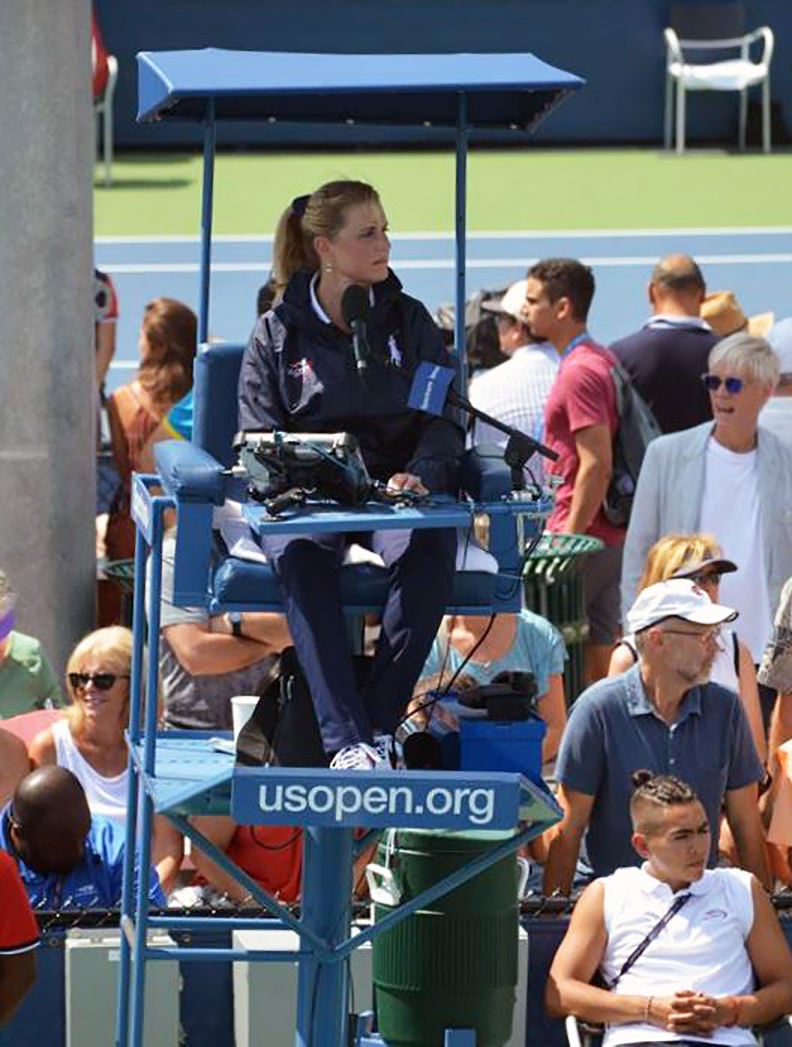 Beverly Helton serves as an umpire and a chairperson for the U.S. Tennis Association’s New England chapter.

Beverly Helton has worked all of pro tennis’ Grand Slam events as either a line judge or as a chair umpire in addition to serving the U.S. Tennis Association’s New England chapter.

Beverly Helton serves as an umpire and a chairperson for the U.S. Tennis Association’s New England chapter.

NEWPORT — When Beverly Helton walks onto the tennis court, be it at Wimbledon, the U.S. Open or even at this past week’s Dell Technologies Hall of Fame Open at the International Tennis Hall of Fame in Newport, she is determined to make the right call.

The former No. 1 singles player at Foxboro High has become renowned within the U.S. Tennis Association’s New England chapter as being one of the best umpires and chairpersons in ensuring fairness on hardcourts, clay courts and grass courts. She has also been steady on the sidelines at the French Open, Australian Open and three Olympics Summer Games.

Her poise and professionalism in “making the right call” have earned her national acclaim, as well as the distinction of having served at the All-England Championships at Wimbledon seven times, including four championship matches as a line judge while administering to the touring pros in Flushing, Queens, for at least two decades at the U.S. Open.

Tennis, though, is only a hobby for Helton, who is known at Northeastern University and throughout academic and professional circles as Dr. Kris Jaeger-Helton, a teaching professor in the Department of Mechanical and Industrial Engineering.

“The program is a perfect fit for students who are thinking, ‘I want to be a leader in business, but I also want to be an engineer,’ “ said Helton, who simplified the curriculum. “In addition to developing business-savvy engineers, we may serve as a pipeline to the business school. Our average GPA in the Galante Program is 3.7/4.0.”

Helton is also coordinator of the Capstone Design program in Industrial Engineering at NU, this year overseeing 91 Industrial and Mechanical Engineering students, 20 industry and research projects, and 10 faculty members for the seniors’ final year-long engineering projects.

Helton earned her Master of Science in Biomechanics and her PhD in Human-Machine Systems Engineering at Northeastern, with a minor in Cognitive Psychology. During that time, she served on the faculty in the Department of Physical Therapy, teaching in Neuroanatomy, Clinical Kinesiology, and Biostatistics.

During her time at Northeastern, Helton has been voted Professor of the Year 13 times, three for First-year Engineering, nine times in Industrial Engineering and once in Mechanical Engineering, as well as being featured in “The Students Speak” selections in the College of Engineering. She has also earned the College-wide Engineering Teaching Award.

In addition, Helton also served as Associate Director of the Virtual Environments Laboratory, where she conducted research and advised graduate students with a concentration in driving simulation and traffic engineering.

She was appointed the Director of Senior Capstone Design and in 2015, Helton became the director of NU’s Galante Engineering Business Program. She served as Program and Division Chair for the New Engineering Educators Division and is now a director in the Design Division.

Helton has published much of her educational research through ASEE, winning over a dozen “Best Paper” and “Best Presentation” awards with her co-authors, including Best Overall Conference Paper, and she presented papers in Best of Design in Engineering Education Division sessions at the 2017 and 2018 ASEE Conferences.

While those endeavors make up various aspects of her day job, Helton’s side job is calling serves in or out, and determining whether forehands or backhands are inside or outside of the white lines.

Helton received her calling onto the tennis courts to become a linesman at the urging of King Philip Regional High girls’ tennis coach Bob Goldberg, a mentor during her days at Foxboro High.

“I took her aside one day and asked if she would be interested in umpiring,” Goldberg recalled, “because at the time, there was a demand and they were looking for people with a strong tennis background, especially women.

“I went to the powers to be at Longwood (the tennis club in Brookline, home of the former U.S. Championships) and they said bring her in. I just had a feeling that she would like it, she loved everything about tennis.”

From there, they trained Helton and she became part of the professional officiating team.

While the “RAV” (video assistance review) became a tool for World Cup soccer officials to make the right call, professional tennis uses the “Hawkeye” system to determine whether balls hit the line or were out of play.

Helton has been trained as a review official and is now assigned by the USTA to also serve as a supplement review official (RO) at the U.S. Open in addition to being an on-court umpire.

“As an RO, you closely watch the match, and if a player is challenging the call, assist IT, TV and the chair umpire in the electronic aspect of the process,” she explained.

“In umpiring, you have to keep yourself mentally alert, there’s that mental conditioning,” she said of being locked in to every stroke of the ball. “I wouldn’t describe it as intimidating, even when I first started doing it. Moreso, it is a heightened level of awareness and being engaged for every point.

“You have to keep doing what’s been working in terms of technique, and — to the degree you can — you want to try to stay in good health, eat well, get a good night’s sleep and stay hydrated.”