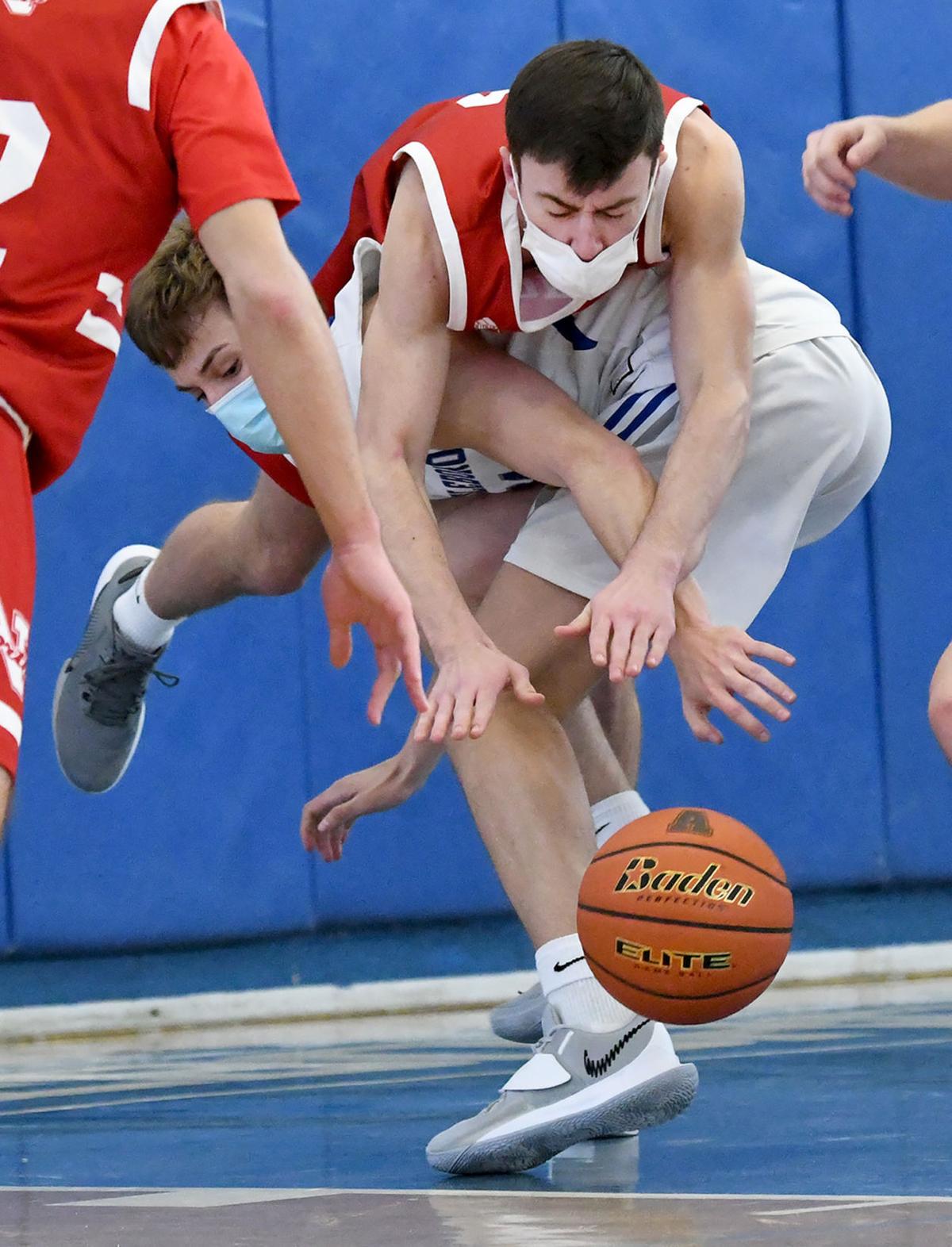 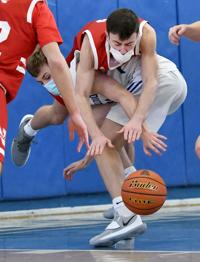 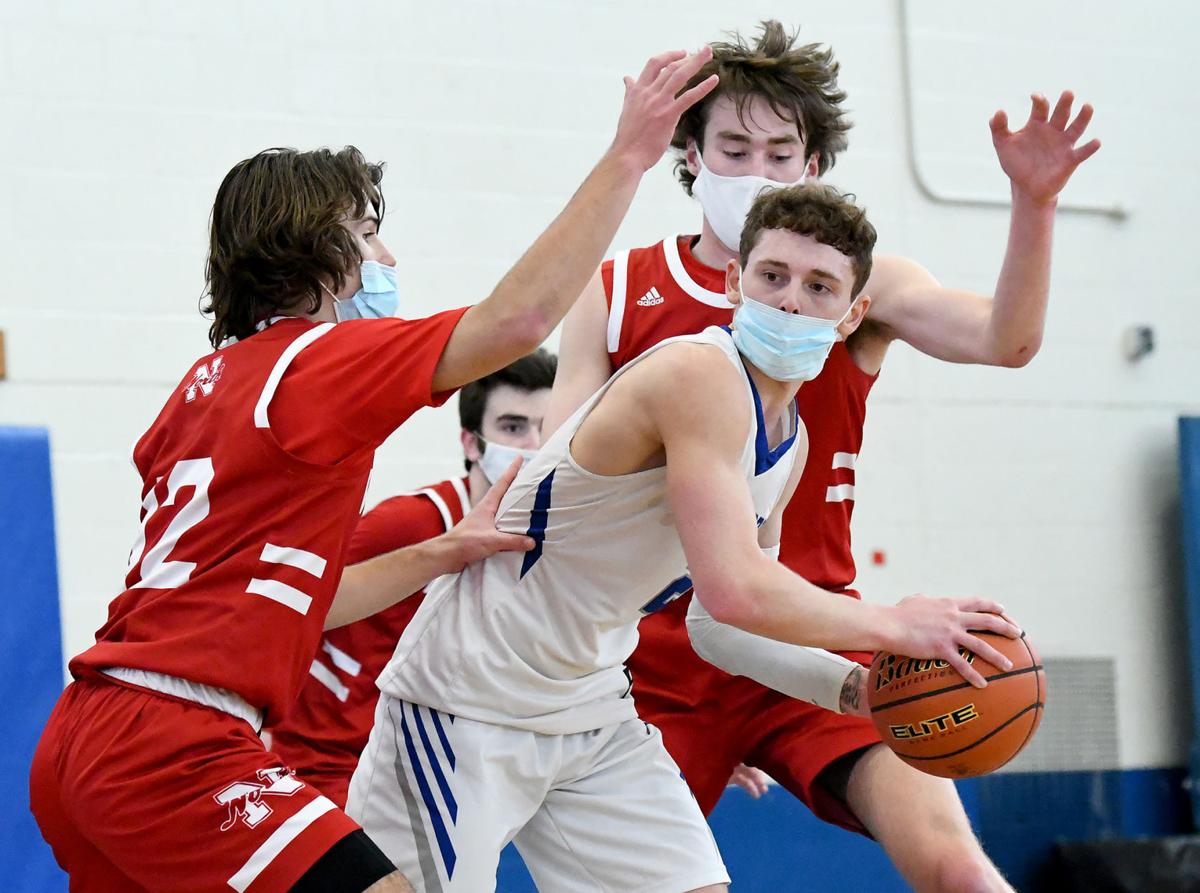 Attleboro High’s Justin Daniels is surrounded by the North Attleboro High defense, including Brody Rosenberg (12) and George Ladd during Sunday’s matchup in Attleboro.

Attleboro High’s Justin Daniels is surrounded by the North Attleboro High defense, including Brody Rosenberg (12) and George Ladd during Sunday’s matchup in Attleboro.

ATTLEBORO — If there ever was a game for George Ladd to place an exclamation mark upon his basketball career at North Attleboro High School, it was in his final game donning jersey No. 33 for the Rocketeers.

Ladd scored a career-high 30 points, converting 14 of 16 free-throw chances, including hitting eight over the final 1:13 left on the clock at Attleboro High School Sunday as the Big Red left the floor with a 57-46 victory over the Bombardiers.

In beating the Bombardiers for the first time in their careers at North Attleboro High, Edan Kelley, Tommy Onorato, Jason Rodriguez, Jimmy Caraballo and Ladd will never forget their very last game in representing the Rocketeers.

In winning for the fifth time over their past six starts, the Rocketeers (8-3) overcame a six-point first-half deficit, never trailed during the second half, allowed AHS merely two second-half 3-pointers, and limited the Bombardiers to one field goal for the first six minutes-plus of the fourth quarter.

“To limit them to 46 points, that was big,” Ladd said of North holding AHS to 20 first-half points on 30 shots, while the Bombardiers undermined themselves with 13 second-half turnovers. “It was a good way to end the season,” Ladded added.

“We thought that we could win; we know that we’re one of the best teams in the Davenport (Division of the Hockomock League), we just executed.”

Ladd totaled six points and three rebounds in the first quarter as North trailed 12-10 at the stop.

Ladd hit both ends of a one-and-one chance with 62 ticks on the clock as North closed to 20-19 of AHS at halftime.

Ladd accounted for 12 third-quarter points, all in the paint, two off of a steal and two more on an offensive rebound tap-in at the buzzer as North took a 39-32 lead into the fourth quarter.

Ladd hit pairs of free throws with 1:13, 0:38 and 0:21 left in the contest to prevent AHS from staging a furious finish.

“North played a great game and had our number,” AHS coach Mark Houle said of the Rocketeers. “George Ladd was consistently good throughout the game.”

Five points and four rebounds by Harrison helped AHS through the first quarter. Then Harrison scored in low off of an Evan Houle pass and Holcomb converted an offensive rebound to present AHS with its largest lead (16-10).

“They (AHS) were the most complete team that we’ve faced all year, with more depth and more size than we’re used to,” North coach Sean Mulkerrins said. “We have a lot of respect for the shooting of Houle and the play of Daniels, so we had the zone (defense) in our back pocket, maybe as a change of pace. I thought that if we could stop them in transition and keep them off the glass, we’d have a chance.”