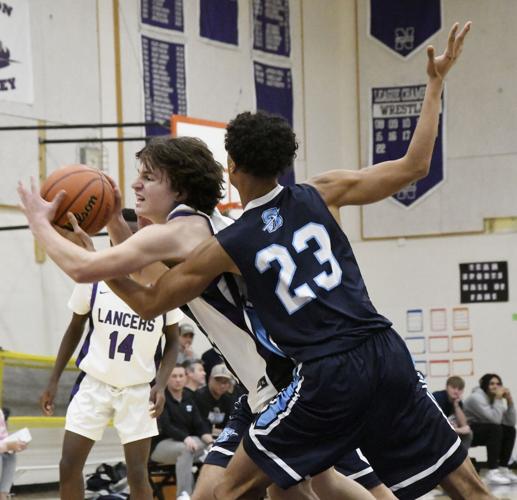 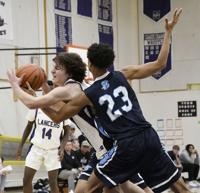 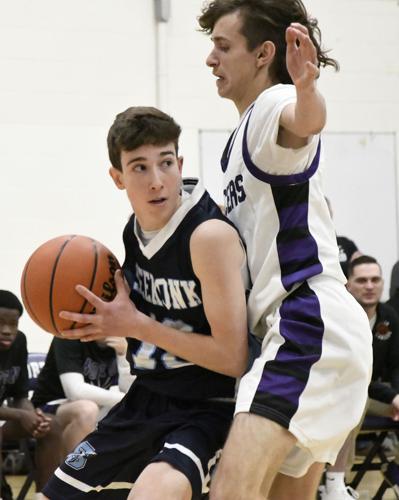 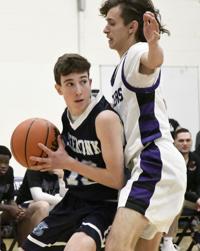 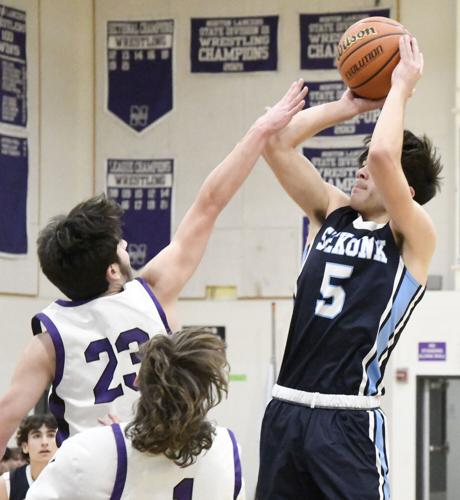 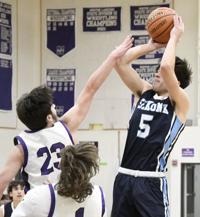 Norton's David Inozil lines up for a free throw Friday night against Seekonk. 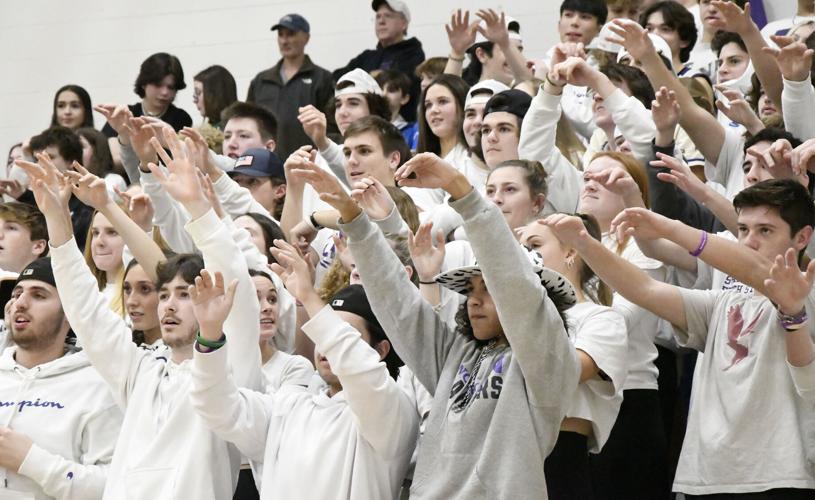 The Norton High School student section, donning all white, waives its hands and fingers in the air while the Lancers make a free throw attempt Friday night.

Norton's David Inozil lines up for a free throw Friday night against Seekonk.

The Norton High School student section, donning all white, waives its hands and fingers in the air while the Lancers make a free throw attempt Friday night.

The Lancers came out of the gate firing, hitting back-to-back 3-pointers by Marquise Pina and Kevin Marinilli. Another Pina 3-pointer had early momentum in Norton’s favor at 9-3.

The Lancers never surrendered the lead as the Warriors struggled to finish from under the basket on first and second chances while Norton connected for four treys in the first quarter to jump ahead 20-6.

The Warriors kept the margin around a 10-point deficit for the second quarter as Norton picked up its pace to score in transition. The Lancers closed the first half on a 9-3 run to hold the lead at 38-22 entering the break.

“I kept saying we need a 6-0 run at halftime,” Norton head coach Marc Liberatore said. “If you get down a certain amount, you’re not going to play a box and one (the defense Seekonk played early on). We struggled with it a little bit, it was a good move by (Seekonk head coach Alex DaLuz) to go to that.”

“We went to a box and one and that maybe stifled them for two or three minutes,” Seekonk head coach Alex DaLuz said. “They’re well-coached and had other guys step up and adjust. That’s what a good team does. They’re not a one-man team, but Pina was the focus, and he got loose. You can’t give him an inch.”

Coming out of break Pina picked up where he left off, resuming play with a 3-pointer. He finished the night with 19 points, while Marinilli led Norton with 20.

Kevin (Marinilli), he was the back up to Justin Marando last year and he’s had a really good off-season. It’s good to see him step up into that shooting role,” Liberatore said. “Marquise was obviously electric in the full-court. I thought he rounded well too.”

By the end of the third quarter, the game had crept into blowout territory at 58-31. Norton opened the fourth quarter run a short run and maintained a 20-point difference until the final buzzer.

Norton moved the ball around and rotated its bench in to success in the win, getting 10 players into the scorebook with points (12 played in total).

“I thought early especially, some of the more veteran games could take over and be comfortable because they played last year,” Liberatore said. “Some of the newer guys took a minute. We got some sophomores on the floor quite a bit, their first varsity game. Just to get them the experience where it’s not a one possession game, I think that’s good for them to get used to the speed of a varsity game. That was nice to get everybody in.”

On the other side, Seekonk was led in scoring by Caiden Sears’ nine points, all coming from 3-point scores. Kevin Crowe had seven points, Jaden Arruda had eight points and Ethan Albuquerque had six points.

“We really couldn’t get anything going offensively,” DaLuz said. “They had more offensive rebounds than we had, so when you give teams second and third chances and they hit six threes in the first half, it’s a formula for a loss. Hats off to them, they’re a great program. It’s not the result we wanted, but we fought for it for four quarters.”

A rivalry gets its name

The teams play twice a year, and have not had an official title on their series against one another. Now, with Willow Tree Farms being near the midway point of the two schools, the rivalry has more of an identity.

“We’re not in the same conference, but we play each other twice a year,” DaLuz said. “It’s just incentive to play a little harder.”

The trophy was brought in by DaLuz, a former JV coach for the Lancers, as the defending winner of it before he handed it off to Liberatore Friday night, who was the winner of four out of the last five meeting against Seekonk. The name of the trophy came up as a joke, and is now one that is ingrained on the side of a trophy just short of a foot tall.

“We joked about that and we’ve played a few years,” Liberatore said. “We said something about it this summer and I jokingly mentioned Willow Tree chicken salad. He went out and did it all. Now we get it, and we play them in February to see who gets to hold onto it. It’s a great idea by him and I like playing him because it’s a close rivalry, so we’ll see how it goes in February.”