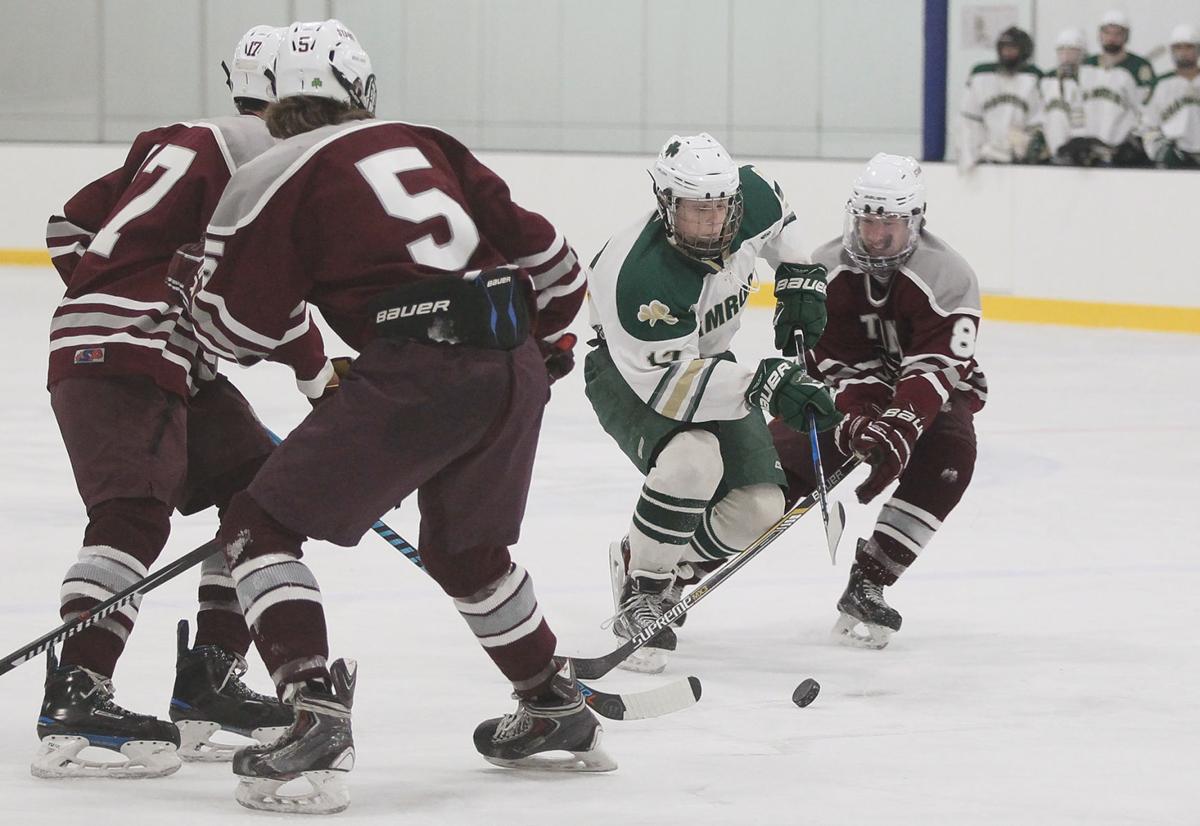 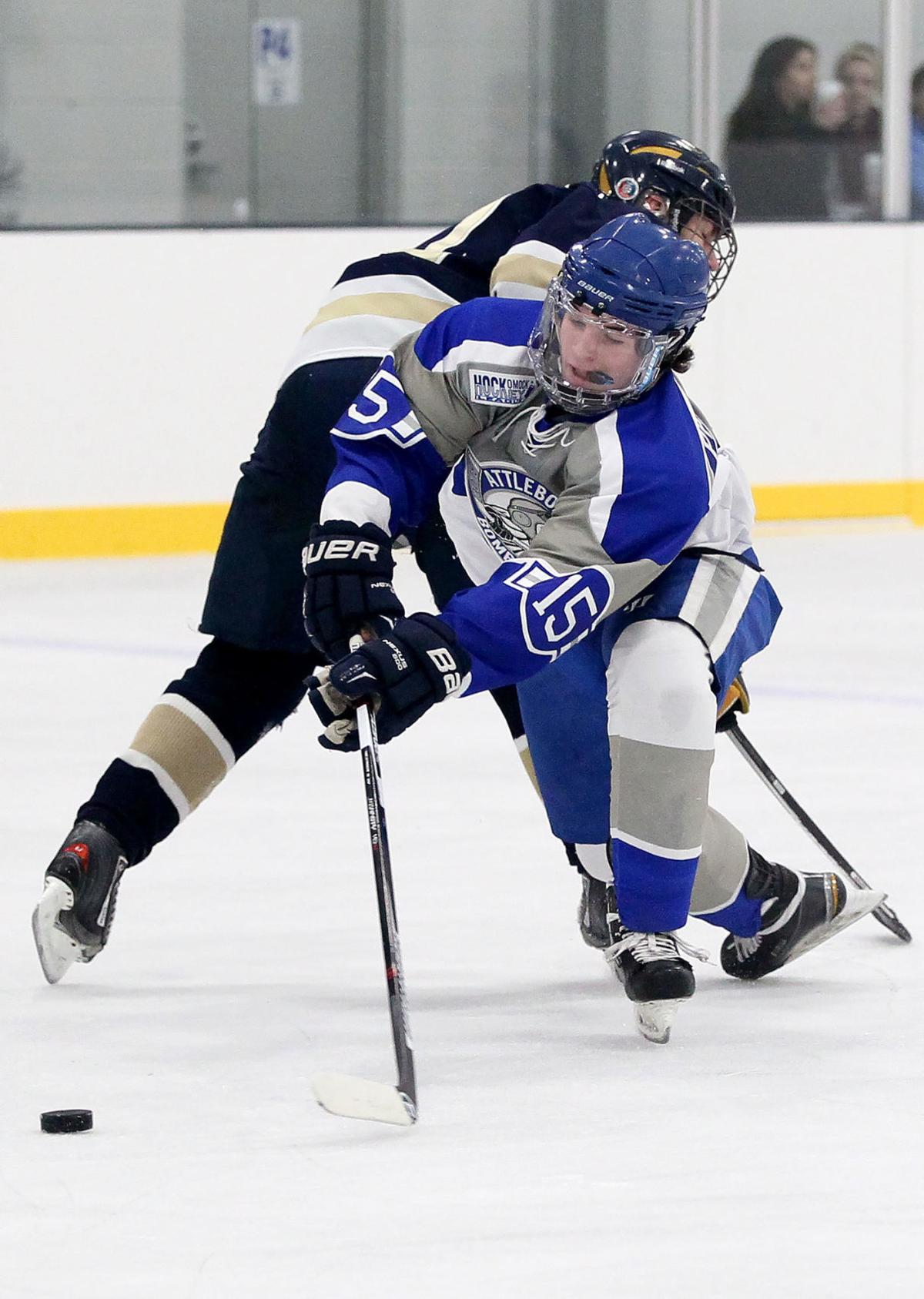 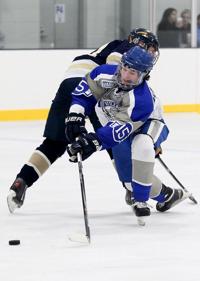 Attleboro High’s Jake Parker, front, avoids the check to continue a rush to the net against Foxboro.

Attleboro High’s Jake Parker, front, avoids the check to continue a rush to the net against Foxboro.

ATTLEBORO — In the winter, few things are more comforting than cozying up by the fire. So, Kevin Dunn figured, why not throw his team into the fire?

After a 16-5-1 season, the Bishop Feehan High ice hockey coach wanted to give his team a challenge early on, scheduling five games in a 10-day stretch to open the season. And there are no bunnies in that late-December sprint, skating against teams like North Attleboro, Marblehead and, potentially, Catholic Memorial.

The Shamrocks will roll out an even number of underclassmen as upperclassmen, making each minute and each mistake a potential lesson.

“We didn’t pick an easy schedule to start,” Dunn said. “We want to get the kids battle-tested before the season starts.”

Senior John Anghinetti leads the Shamrocks back onto the ice, skating on the top line with junior Tim D’Ambrosia and sophomore center Jason Sullivan. Underclassmen Kevin Barrera, Seth Dunphy and Kevin Barrera will also see plenty of time and could crack that top forward mix.

Tom Reilly, Jack Murphy, Cam Smith and Tom Potenza figure to earn top time on the blue line in front of two capable goalies. The senior duo of Derek Dattero and Aidan Findlen combined for a goals-against average of just under two and a save percentage around .910.

“They did an outstanding job for us last year, so we’re expecting the same,” Dunn said. “Defensive zone coverage should be a strength. We’ll build our way out from there.”

With 80 percent of the team’s scoring and about half of the roster from last season skating out the door, Dunn understands it might be a process, but he was encouraged by the Shamrocks’ easygoing nature throughout the 51-skater tryouts.

“It’s been a fun couple of weeks,” said Dunn. “It took us a little longer this year than it normally does, but for the most part it’s been pretty relaxed.”

First-year head coach Bob McManama is still getting his bearings with this year’s Red Rocketeer squad, as you’d expect. Throughout the preseason, he’s made an effort to assess every player’s talent and hockey IQ in order to find where each fits on the squad.

“The kids have been great,” he said. “They listen, they’re mature, and they’re trying to take in as much as I’m putting out there.”

Junior goalie Ryan Warren figures to be one of the area’s top goalies. “He’s going to be a big asset for us this year,” McManama said.

With a glut of right-shot defensemen, McManama will mix and match his defensive pairings, which include players like Will Yeomans, Brendan McHugh and Jeff Baker. Charlie Connolly offers some upside at the position, but the Red Rocketeers will have to wait two weeks for his shoulder injury to heal.

Senior captain Jake McNeany will be a trusted player as the team tries to best last year’s 14-4-4 record. The team will count on him to score goals, as well as Andrew Wissler, Jack Connolly, Anthony Zammiello and Tyler Robinson. Freshman Tyler Sarro could also crack the top line based on preseason performance.

“The energy has been great,” said second-year Mansfield head coach Mike Balzarini. “The guys are champing at the bit to get back on the ice.”

The Hornets will mix some new players into the lineup as they look to improve upon last year’s 11-8-2 record. Senior forwards Cullen Anastasia and Dylan Tivnan will earn heaps of ice time. Sophomores Chris Jenkins, Jake Lund and Kevin Belanger will also take on larger roles, while seniors Patrick McCafferty and Adam Anastos provide much-needed experience at the position.

Mansfield lost its top two goalie from a year ago, which leaves sophomore Sean McCafferty as the starter heading into the year. “He’s got some big shoes to fill,” Balzarini said. “He’s looked great in practice. He’s playing with confidence.”

Some late-game letdowns plagued the Hornets a year ago, Balzarini said, but another year under his system and a renewed focus on playing three full periods should set that straight.

“I’d like to see us play with a little bit more consistency,” he said. “We got a little complacent. I’d like us to play with a little more confidence. It was a learning curve for the coaches, the school and the players with a new coach coming in and having different systems. We just want to make sure that we go out and compete each and every night. We can’t afford to take any shifts off.”

The Bombardiers have several impact players returning from last year’s 6-12-2 squad, the first season for coach Mark Homer at the helm of the program.

Senior captains Jake Parker and Eddie Noel bolster the Attleboro offense and defense, respectively. Defensemen Sam McKenzie and Kyle McCabe provide some returning experience at the blue line. The Bombardiers have a talented group of underclassmen that they hope take the next step, including forwards Ryan Morry and Liam McDonough, and defenseman Sam Flynn.

In goal, junior Evan Andrews and sophomore Derrik Rivet will provide the last line of defense.

“Offensively we need to concentrate on creating opportunities by being more aggressive and taking away the time and space of our opponents in both the neutral and (offensive) zones,” Homer said. “As a team, we are working on becoming more competitive in our games at all phases of the game.”

The not-so-young Warriors hope to improve on last year’s 4-16 campaign. And while all four wins came in league play last year, the bar will be raised with 13 King Philip skaters returning.

“I expect there to be some chemistry early,” said KP coach Paul Carlow. “This is a veteran team, so I expect us to get off to a good start.”

Senior defensemen Will Connor and Mitch Cormier provide a strong defensive foundation. Junior Garrett Maxwell and sophomore Kyle Gray also earned the trust of their coach, while a couple of newcomers, senior Mike Curtin – coming over from the South Shore Kings program – and freshman Rocco Bianculli bolster the Warrior depth.

The Warriors will need big offensive production from senior captain Collin Cooke, who has delivered in his past three seasons. Junior Ryan Fitzpatrick should also help offensively after missing most of last season with a broken arm. Juniors Luke D’Amico and Seth Almeida, sophomores Chris Daniels and Jack Coulter, and the team’s line freshman, Conor Cooke, round out the forward group.

Senior Shane Frommer will start in net, though perhaps not in the season opener. After a grueling football season that culminated in a second straight state championship, Carlow gave Frommer a week to rest, though he planned for him to start one of the first two games of the season. “Hockey is a long season,” said Carlow, acknowledging his assistant captain’s bumps and bruises. “He’s a leader in the room and a leader on the ice.”

With a mix of upperclassmen and underclassmen, the Warriors are hopeful they can return to the MIAA Tournament after a 5-15 season. Senior captains Aidan Sullivan and Taylor Sharfman return some much-needed skill and experience to a team that allowed an average of 5.45 goals per game last season. Brendan Tully will also contribute on the blue line in front of sophomore goalie Espen Reager.

In his second season at the helm, coach Mark Cedorchuk hopes to have another trick up its sleeve, similar to the one it revealed last season against Tri-County in its preliminary-round victory.

“With a combination of experienced upperclassman and talented underclassman, (we’re) looking forward to an exciting and competitive season,” Cedorchuk said.

With just four returning seniors among its 21 skaters, D-R/Seekonk coach Tom Fecteau expects there will be a learning curve among his young corps of players. But he also expects an adherence to strong defensive fundamentals.

“We’ve always preached taking care of your own defensively,” said the third-year coach. “If we take care of that, we’re going to be in a better situation coming down the stretch of the game. Good defense will present good opportunities offensively.”

Junior Ben Lunnie and freshman Wyatt Nastar are also expected to make waves for D-R/Seekonk. The team also anticipates a variety of supporting players to lend a hand, if not excel beyond expectations. Junior Ryan Decouto, sophomores Zach Evans and Adam Nastari, and freshmen Michael Agresti and Peter Anghinetti, among others, will all contribute for the Falcons.

Lancers coach Eric Grasso knows he can’t just rely on one scoring line to carry his team through to victory. His squad will need scoring up and down the lineup. But his seven seniors seem committed to turning things around.

“We’re going to need some secondary scoring, which has been lacking,” Grasso said. “I think the biggest thing is going to be senior leadership. They have a lot of pressure on them too, because they want to get in the tournament pretty bad.”

Goalie Triton Dos Reis, a captain, will be counted on after parts of two seasons of learning on the job. “He did a lot of growing in the offseason,” Grasso said.

Seniors Evan Czazotti and Tony Cerce, the latter of whom can also play in net, bolster the forward group. Sophomore Patrick Lorden also jumps up from the JV in hopes of providing that necessary scoring depth.

It’s a young squad for coach Mark Spillane, with only two seniors to its name. In fact, freshmen will be prominently featured on its forward lines and defensive pairings.

Freshman twins Brody and Bryce Dalzell will skate on that line with junior John Robinson. Another junior, Luke Madden, offers some expertise at the forward position along with talented sophomores Jesse Joy and Jake Morgan.

Spillane will match experience and inexperience on the blue line, as seniors Connor Capobianco and Mike Burdett will pair with freshmen Kyle Mastroianni and Robert Johnson. Junior goalie Brian Hall slides between the pipes after playing forward last season.

Mistakes will happen with a young team, particularly one with 15 freshmen, but Spillane will start with a focus on defensive fundamentals and add to the recipe from there. “I gave them free rein to play their game and play it one step at a time,” said Spillane.