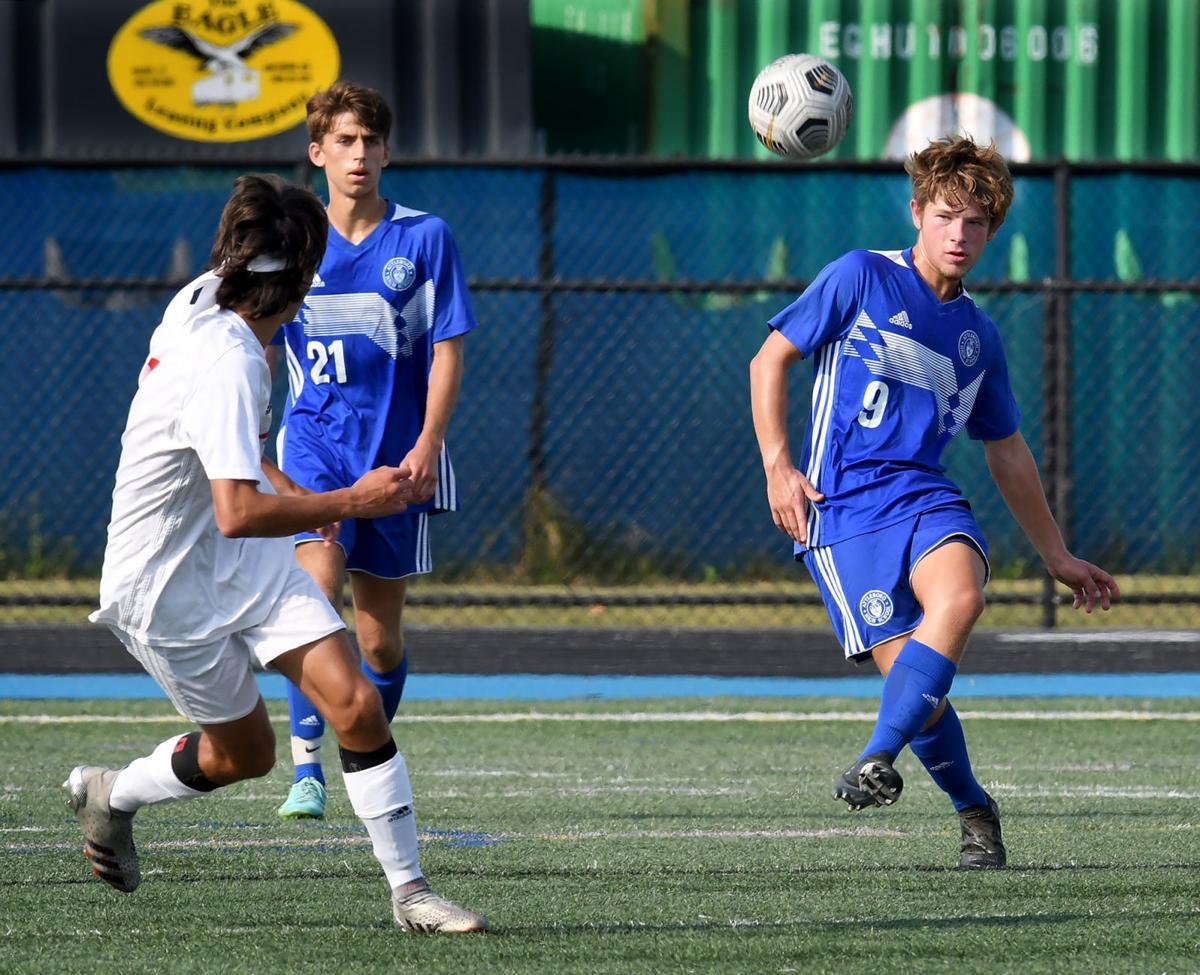 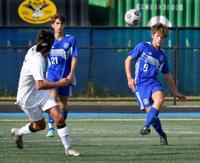 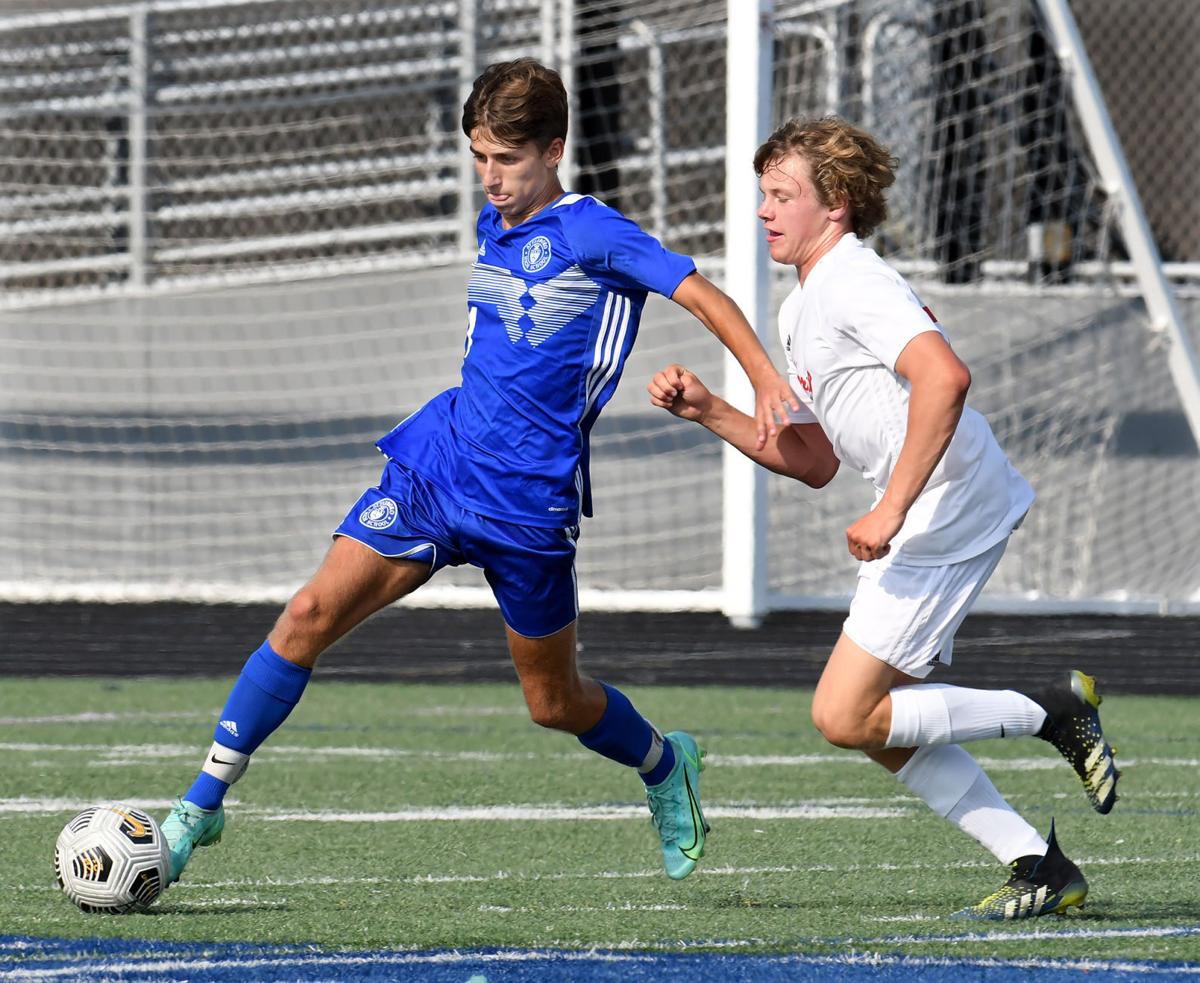 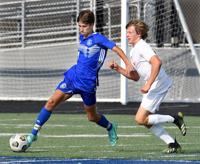 ATTLEBORO — Shhh! Coach Peter Pereira may have the surprise team in the Hockomock League team this soccer season in his Attleboro High Bombardiers.

“The young kids are coming along, they’re working hard,” is all that Pereira will say of his Bombardiers, coming off of a 2-5-6 fall season.

AHS possesses a skillful striker in sophomore Alex Vecchioli, a terrific playmaker at midfield in junior Esvin Morales, a veteran defender in senior Cashel Stuger, and a goalkeeper in sophomore Tyler Rocchio who can influence the offense with his punting.

The Bombardiers graduated 14 players, but Pereira just might very well have his best team as far as talent and chemistry in years.

AHS plays with exceptional touch, patience and poise. “But, we have seven new starters too, we have some guys out with injuries, and we need experience,” Pereira said. “There’s no doubt that these kids can play.”

Up top in the attack with Vecchioli will be senior Connor Adema, along with sophomores Luke Hagopian and Will Badger.

Pairing with Morales in the midfield cast will be twins Chris and Tom Russo, both seniors, along with seniors Liam Bischoff, John Blouin and Yianni Skordas.

In front of Rocchio with Stuger will be club-tested and skillful juniors Toby Smith, Ian Miller, Lucas Marques (“as tough as nails”) and Jake Stromfors.

Shamrock coach Mike Pariseau is cautiously optimistic, having been greeted by some 68 candidates for the team. “Not that I haven’t been surprised, but we’re getting some strong contributions from a lot of kids all over the field,” he said.

The Shamrocks possess scoring power up front in seniors Tate Demond, Liam Duffy and Craig Scharland. The trio can all create their own chances and have developed a strong chemistry.

Senior James Breckner returns for a third season starting in goal, having an entire cast of veterans in front of him on the defensive wall with seniors John Pearl, Ryan Rebelo and Will Jones, along with junior Ben Sadler.

At the moment, the Shamrock starring midfield has senior veterans Matt Lipkind and Joe Sott along with junior Emery Sunderland.

“We definitely have good skill,” Pariseau said of the Shamrocks being able to build out of the back and through the midfield. “We have the potential to play well.”

“We have the makings of a good team,” Foxboro coach Dan Ambrosio said as the Warriors return four-year starters in senior goalkeeper Derek Axon and senior midfielder Alex McGarry.

The issue will be toughness on defense, as Foxboro yielded the third-most (25) goals in the Hockomock League during the fall season, compiling a 4-6-2 record.

That will likely be addressed as an improved offense, guided by a former Canton High Warrior, junior Jorge Sanchez, will take the pressure off of the defense. He will be creating chances at midfield with sophomore John Hollis, who was right at home on the field as a freshman.

Up top, senior Matt Angelini and junior Alex Penders are much-improved. In front of Axon will be senior Zach Raymond and junior Marco Picini in the heart of the defensive backline.

“We’re going forward,” Ambrosio added. “I like the way that we’ve come together as a team.”

Rest assured that the Hornets will be absolutely stingy on defense with senior Jack Lasbury-Casey in goal and a back wall in front of him that allowed the third-fewest goals (nine) in the Hockomock League last season.

“That being said, we’re getting there defensively, that’s not the strength of the team,” coach Steve Sheridan confessed. “We’re still growing, we’re not where we need to be.”

Without a doubt, the heart of the Hornets is the midfield. The athletic, versatile and experienced cast is led by senior captains Matt Hyland and Dan Rowe. Juniors Connor Palinski and Grady Sullivan have terrific transition tools.

Mansfield compiled a 6-4-2 fall slate. Sheridan is confident that the front line with senior Liam Anastasia along with juniors Aidan Steele and Sagar Koul will flourish in the attacking third of the field.

The Warriors were one of the most difficult teams to score against during the fall season, as KP allowed just 11 goals through 13 matches en route to a 5-4-4 record. “We lost a lot (eight starters) through graduation, but we have a lot of very good underclassmen,” coach Mike O’Neill said.

Senior captain Luke Pfeiffer, a natural midfielder, will be a creative transitional player out of the defensive back line. Senior Dan Fifolt will provide strong defensive support.

Senior captains Stephen Griffin and Sean McCarthy are versatile, capable of playing at midfield and at back. Junior Jack Hancock and Matt Thompson similarly will have various roles.

Junior Connor O’Reilly, standing 6-foot-3, and sophomore Alex Nathan will have the goaltending roles. “We have a lot of new faces on the field,” O’Neill said. “When you lose 13 seniors, that creates a lot of opportunity for the younger kids coming up.”

If only the Big Red could score some goals. Creating scoring chances and finding flair at the finishing end will determine the success of the Rocketeers, who scored the third-fewest (nine) goals in the Hockomock League during the fall.

North won three matches and tied three. Without a doubt, the Rocketeers will be staunch defensively with senior captain David Floyd in goal (1.50 goals-against mark) and with a backline of seniors Joe Shepard and Brody Rosenberg.

Junior Jack Regan and sophomore Kaden Burns are posted on the backline. “We’re young, but we’re improving,” North coach Geoff Burgess said. “Defensively, we’re sound. But, we have to score some goals.”

North has a pair of good playmakers at midfield in senior Connor Ward and sophomore Carson Dameron. Senior Jaad Ismail, juniors Givany Carney and Griffen Rodden along with sophomore Quinn Conley are developing into threats in the attacking third of the field.

The Rocketeers participated in the Maine-based Cape Manitou experience, and Burgess believes the camaraderie and chemistry has developed. “This is an extremely coachable group; we have a good mix of talent and experience, we’re excited to see what happens,” Burgess said.

The Lancers may very well be contending for a title and being the most difficult foe for any Tri-Valley League team as soon as coach Eric Greene figures out his best combinations of players and finding some scoring touch.

“We’re going to have to shut down teams with our defense, with playing hard,” Greene said of the first-month mindset. “The boys have the talent and they’re energetic.”

The Lancers will take their cue on the attack from a pair of very good transitional players, senior captains Jack Rilli and Nolan Winfield.

Midfield convert Cole Studholme, a junior, will open in goal, but junior Luke Ferreira could take over and create an option for Greene. The defensive backline has juniors Kyle Kofton, Cam Lermer and Adam Wynne along with impressive freshman Casey Potts.

The expectations to win are paramount for the defending South Coast Conference champion Falcons, and coach Mike Morgado has a foundation to do that.

Starting with senior striker Kevin Smith, one of the best finishers in the SCC, playing up top with senior Reece Cordeiro and sophomore Kristof Troung. That trio will undoubtedly put pressure on defenses.

“We worked hard in our training, this is a good group of boys,” Morgado said. “They’re ready.”

Sophomore Liam O’Neill takes over in goal with the assurances of having strong support from returning defenders Ben Wheeler and Bryce Downs. D-R has a trustworthy pair of midfielders in seniors Mark Thaler and Tom Zibrida.

Junior striker Collin Peterson may become the most prolific scorer in the South Coast Conference, as he is able to create his own shots with strong dribbling skills.

“This is a very athletic team and they play well together,” Seekonk coach Matt McCartin emphasized. It is also a team with 11 seniors on the roster, including its captains, goalkeeper Giuliano Cozzo, four-year starting defender Owen Pacheco, along with midfielders Nick Lehourites and Jeff Michaud.

Pacheco anchors the defensive back wall with junior J.D. Mello and sophomore Sebastian Rebelo. The midfield cast features senior Kyle Cristino and sophomore Brayden Ventola. “In the summer league we kind of figured some things out; it’s a different team chemistry,” McCartin said. “We just have to work on our finishing.”

New Cougar coach Stacey Howard has just one senior on the roster. “I wouldn’t say it’s a 100-percent rebuild, but we graduated our entire starting lineup.”

The defense is composed of all first-year varsity players: sophomores Jonah Eaton and Grant Kelly, along with freshmen Cayden Borassa and Will Ford.