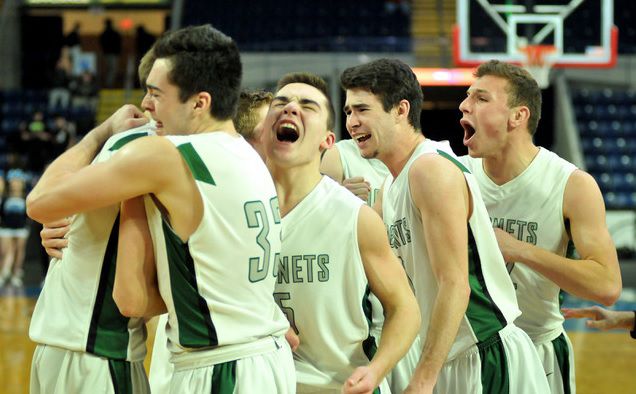 Mansfield's Sam Hyland (33) hugs teammate John McCoy as other Hornets celebrate their 67-54 victory over Franklin for the Division 1 state boys' basketball championship Saturday at the MassMutual Center in Springfield. 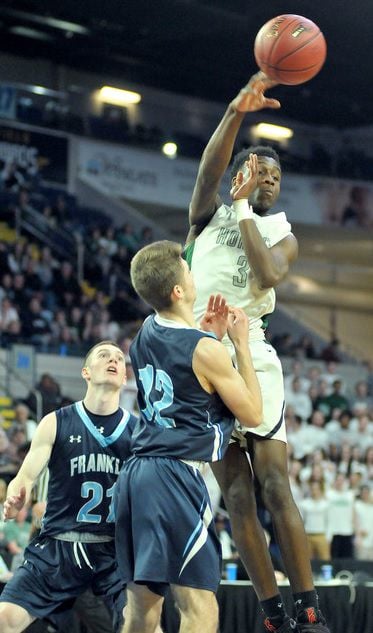 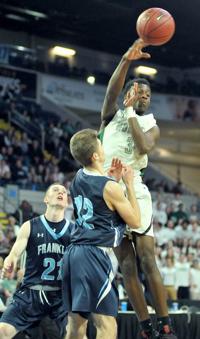 Mansfield's Sam Hyland (33) hugs teammate John McCoy as other Hornets celebrate their 67-54 victory over Franklin for the Division 1 state boys' basketball championship Saturday at the MassMutual Center in Springfield.

SPRINGFIELD -- There are hundreds of former Mansfield High School basketball players that probably never thought, in their wildest dreams, that their little hometown would someday reign as the Division 1 state champion.

Mansfield may not be so little any more, but the big dreams of the past finally came to fruition Saturday when this year’s Hornets defeated Franklin, 67-54, to claim the state title at the MassMutual Center.

For Mike Vaughan, a former Hornet who reshaped the program over his 14 years as head coach and brought it within a basket of a state title five years ago, the finishing of that unfinished business hadn’t quite sunk in yet.

“I can’t even put it into words,” said Vaughan, whose 2013 team had fallen in overtime to Putnam Vocational in the title game at Worcester’s DCU Center. “I know the last time, the stage might have been too big -- the emotion, the excitement of being there. But from the moment we got on the bus yesterday, we were locked in.”

Junior Damani Scott scored 19 points, senior John McCoy 18 and senior Sam Hyland 17 to lead a three-pronged attack that had answers for just about everything Franklin threw at them.

But that’s not to say that the Panthers, who competed in the MIAA’s Central section and were playing in their second straight state title game, were willing to surrender the crown to their Hockomock League brethren without a fight.

Facing an 18-point deficit with 5:15 left to play, the Panthers quickly whittled 11 points off that margin. Flashy sophomore guard Chris Edgehill scored seven of the points in the run, including a 3-pointer with 3:16 left to trail by only 59-52.

“In my head, I was getting a little nervous,” said McCoy, Mansfield’s leading scorer. “But Coach called a timeout and just told us to settle down and look to score. Even though they were pressing, we could still look to the hoop and get to the hole.”

Starting with a short baseline jumper by Ryan Otto off Scott’s feed with 1:58 left, the Hornets were able to break Franklin’s momentum. McCoy would then ice the game at the foul line, scoring five of his 11 fourth-quarter points from there in the last 1:26.

“We’re never going to go away,” said Franklin coach C.J. Neely, who led the Foxboro boys into battle for several years. “No matter how much we’re down, we’re not going to be the team that plays for the newspaper and tries to lose by just 10 or 11. We’re going to go out there and try to cut it and get back into the game.

“We let Mansfield build a lead,” he added, “and they do a great job of moving the ball, making you work and getting to the line and making their free throws.”

Franklin came out hot in the first quarter, as consecutive 3-pointers by senior guard Paul Mahon built a 16-9 lead with 1:27 left. But Mansfield responded in turn as Hyland scored on a drive and Scott finished the quarter with five straight points for a 16-16 tie.

Franklin’s long-range accuracy, in the form of threes by Matt Elias and Bill Harvey, rebuilt a 22-16 lead. But with the Panthers’ advantage at four points, Mansfield ran off 14 of the next 15 -- including nine by Hyland, normally considered a defensive specialist, to put Mansfield up 35-26 at the half.

It was a trey by Hyland with 2:50 left, in fact, that put Mansfield in front for good (27-25) -- although there would be plenty of ups and downs yet to be experienced.

“A couple of guys got in foul trouble early, so other guys have got to step up,” Hyland said. “I took a couple of shots early that sometimes I would have passed up, but I knew I had to let it fly and get something going for us.”

Mansfield had the lead up to 14 points midway through the third quarter on a personal six-point run by Scott, but Franklin stayed in range with an 8-2 run before the momentum was slowed again when Hyland converted a rebound by a missed 3-point try by Justin Vine for a 48-38 lead at the last stop.

Then, McCoy, Vine and Otto put together an 11-3 run in the first 2:45 of the final quarter to build the bulge to 18 points. But the Panthers responded with an aggressive full-court press that turned into the worrisome 11-0 run -- worrisome, but not sufficient to overcome the advantage Mansfield had already built.

“This is a very good team we played,” said Vaughan, whose Hornets had split the regular-season series with the 22-3 Panthers. “We made some shots and did some things we had to do, but that team wasn’t underprepared. If we played this game 10 times, five might go one way and five might go the other. It comes down to the fact that at some point in the second and third quarters, we made a few extra baskets.”

Edgehill finished with 18 points and Mahon 14 for the Panthers, who shot 18-52 from the field and whose outside shooting cooled off to an 8-for-22 rate for the game. Junior forward Jalen Samuels pulled down six rebounds.