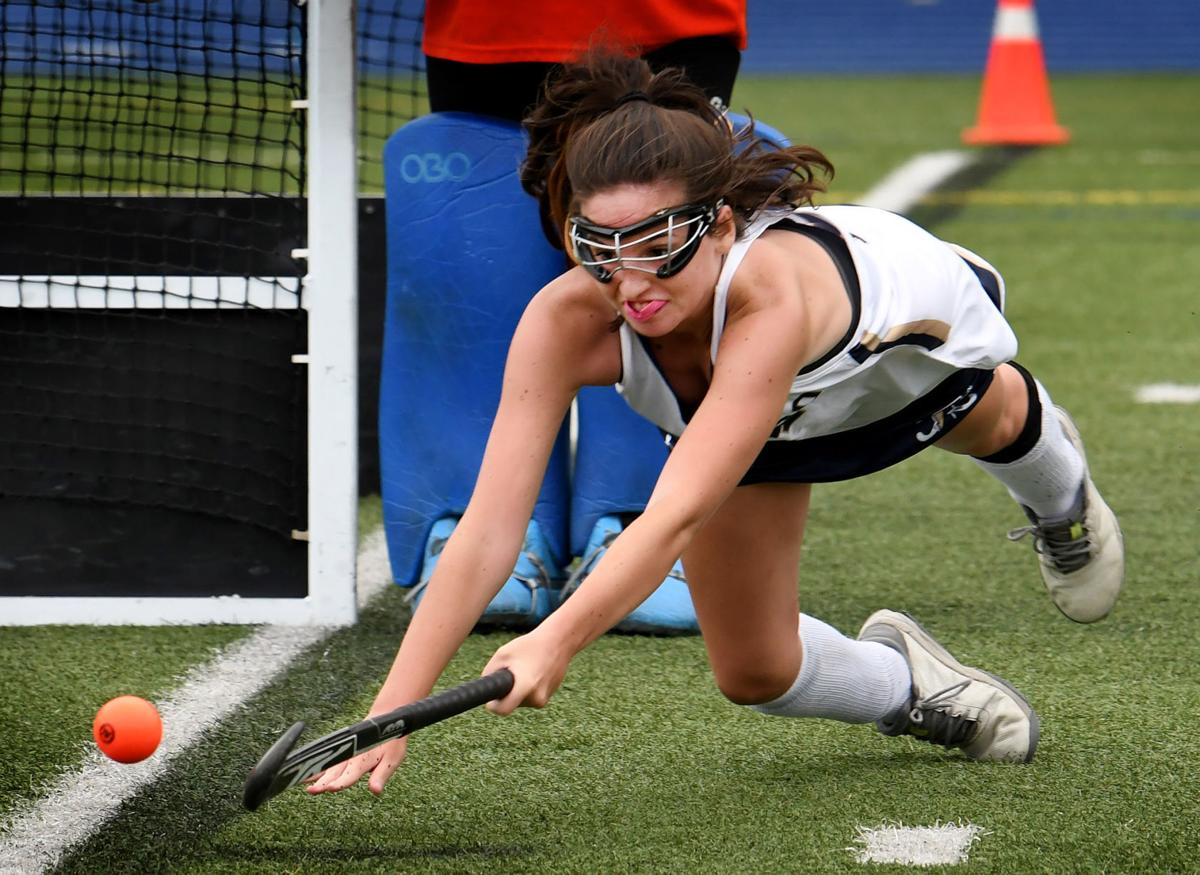 Foxboro High’s Jenny Gallagher dives for the ball before it rolled out of bounds in front of the Mansfield net during the teams’ match at Berns Field in Foxboro Tuesday. 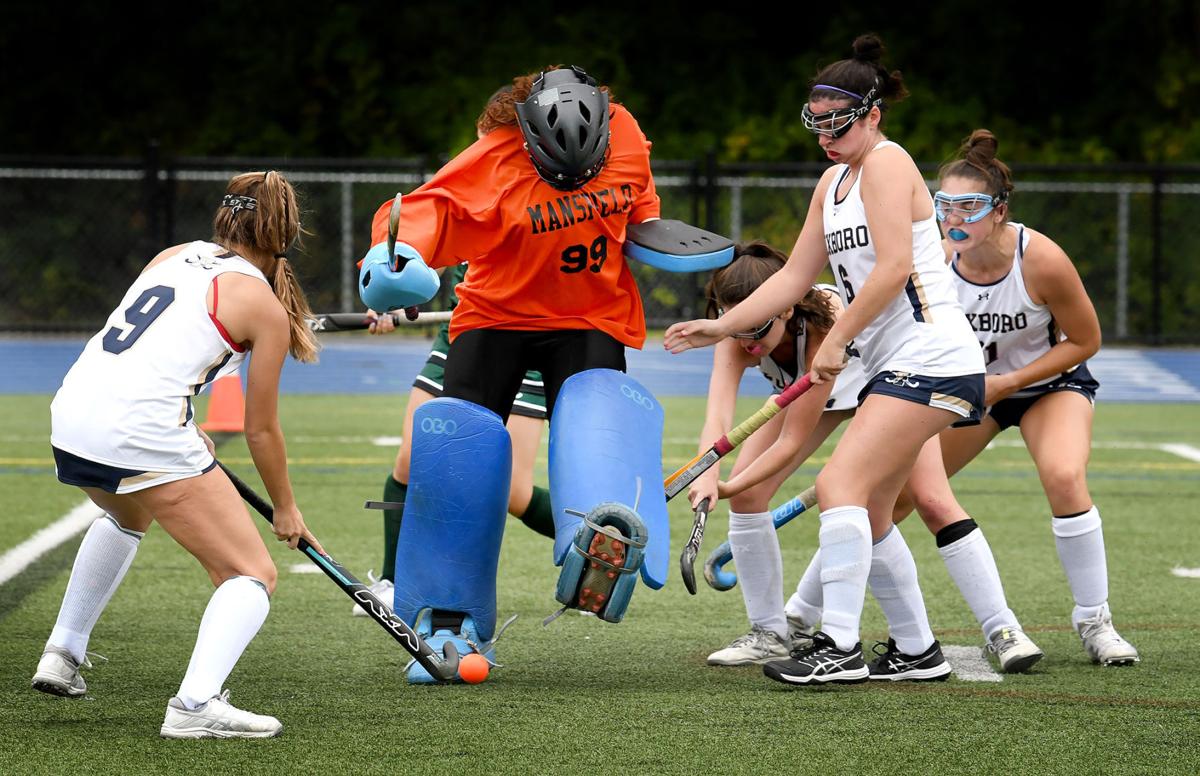 Mansfield High goalie Lily Danehy attempts to kick the ball away from a squadron of Foxboro High players, but Foxboro scored anyway to open the scoring during Tuesday’s matchup at Berns Field in Foxboro.

Foxboro High’s Jenny Gallagher dives for the ball before it rolled out of bounds in front of the Mansfield net during the teams’ match at Berns Field in Foxboro Tuesday.

Mansfield High goalie Lily Danehy attempts to kick the ball away from a squadron of Foxboro High players, but Foxboro scored anyway to open the scoring during Tuesday’s matchup at Berns Field in Foxboro.

FOXBORO — Without a doubt, coach Melissa Bordieri and her Foxboro High field hockey team will be practicing their execution of penalty corners.

The Warriors generated 17 penalty corners, seven over the first 30 minutes of its Hockomock League match Tuesday at Sam Berns Field against archrival Mansfield High. Foxboro totaled 10 more chances during the second half, but the Warriors scored just once with the midfield advantage in a 2-1 victory.

Ultimately it was junior Mya Waryas converting the last of three straight penalty corners taken from the left side by Paige Curran at 2:35 of the fourth quarter that proved to be the match-winning goal for Foxboro (2-1).

“We definitely made it hard on ourselves,” Foxboro High coach Melissa Bordieri said of the Warriors being unable to stake more than a one-goal lead by halftime and then having to protect that one goal margin entering the final 15 minutes.

The Warriors had taken the lead in the first quarter, as sophomore dynamo striker Mary Collins pushed in a rebound of a Waryas pressure at 13:44 for the go-ahead tally. Later, in the third quarter, Collins retired to the sidelines with a bruised knee.

The Hornets, playing without their injured star senior center back, Caitlin Dumouchel, had just four shots and two penalty corners over the match. Still, Mansfield was one bounce away from tying the match over the final pressure-packed eight minutes of action.

Lily Danehy (nine saves), the Mansfield goalkeeper and the heart of the Hornet defense, Hallie Popat and Bethany Sears limited Foxboro to merely one goal over the first 47 minutes of the match.

Facing a two-goal deficit in the fourth quarter, Mansfield coach Theresa Nyhan altered her scheme by removing a defender and adding another attacker. “We needed that one more penalty corner,” Nyhan said of the Hornets’ pressure, with Rose Maher and Celia Puleo testing Foxboro goalie Lilli Jones in the 52nd minute.

The Hornets then found the back of the net when junior midfielder Danni Cuzzi scored in the fourth quarter at 53:33, finishing off her own penalty-corner chance after a scramble.

“We knew what they would do; Mansfield clogged up the middle of the field, but we didn’t transition quickly enough,” Bordieri said of her Warriors.

Collins had penalty corners taken for Foxboro in the third, fifth and 10th (twice) minutes of the second quarter, then had a partial breakaway bid denied by Danehy in the 29th minute.

Mansfield’s lone testing shot of the first half came on a long drive by Maddie Brown six minutes into the second quarter, while its lone penalty corner came a minute later, by Ava Adams on the left side. Lola Varicchione created a good scoring chance for the Hornets off of that play, but the potential game-tying shot was foiled by Foxboro defender Catherine Cotter.

Foxboro had five penalty corners in both the third and fourth quarters. During the third quarter, a backhanded drive by Waryas in the third minute was blocked; Mia DiNunzio had a deflection sail just wide in the eighth minute and then addressed two penalty corners in the 11th minute. Waryas had a shot sail wide right on the first attempt, while the Hornets’ Grace Bertolino broke up another Waryas pressure on the second attempt.

“The more we play, the more confident we get,” Nyhan said of her Hornets (1-1-1). “We have to have and maintain better ball possession.”

Mansfield is off until a 6 p.m. faceoff next Tuesday on its home Alumni Field turf against King Philip, while Foxboro (2-1) invades North Attleboro Foxboro that day as well.