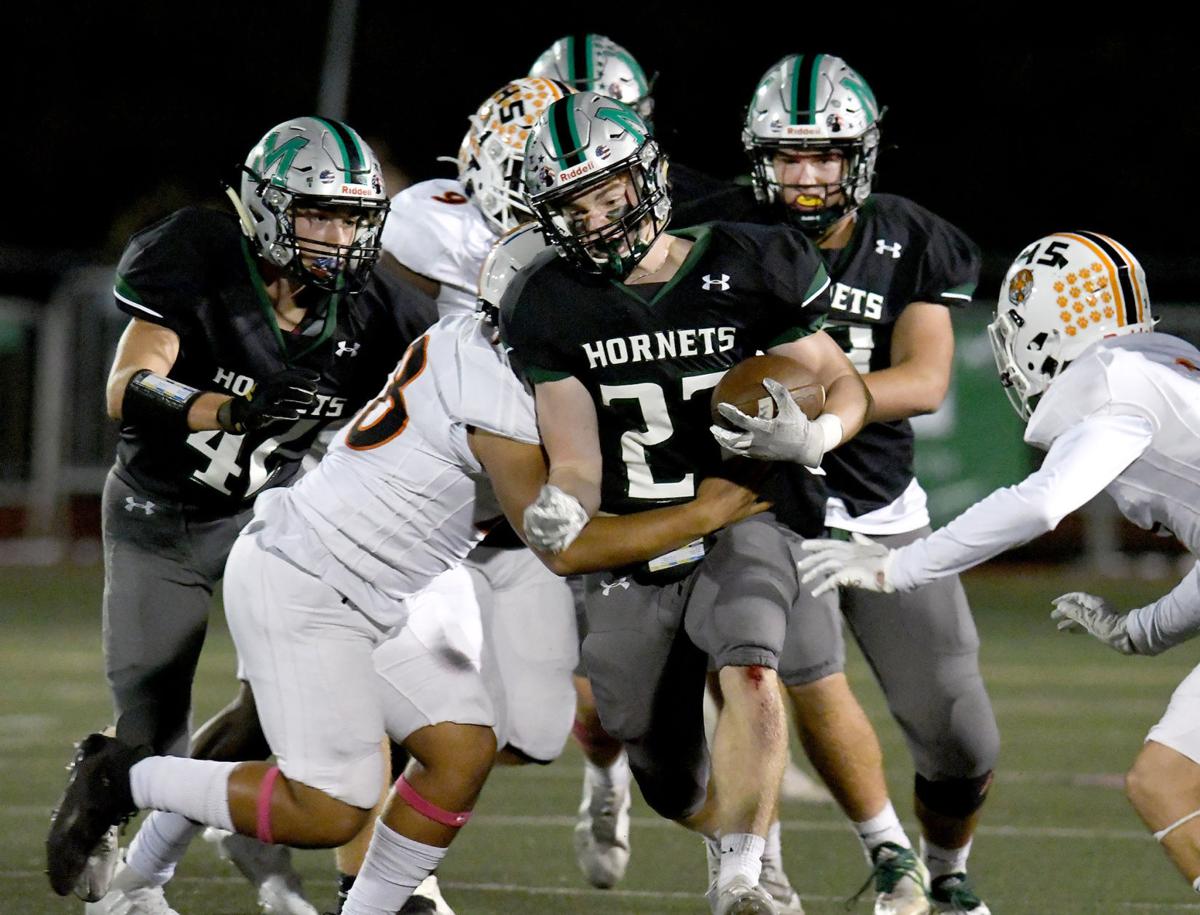 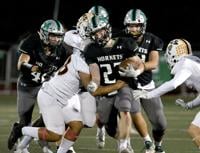 Mansfield High wide receiver James Fichera is brought down by a pair of Taunton High tacklers after making a catch Friday night in Mansfield. 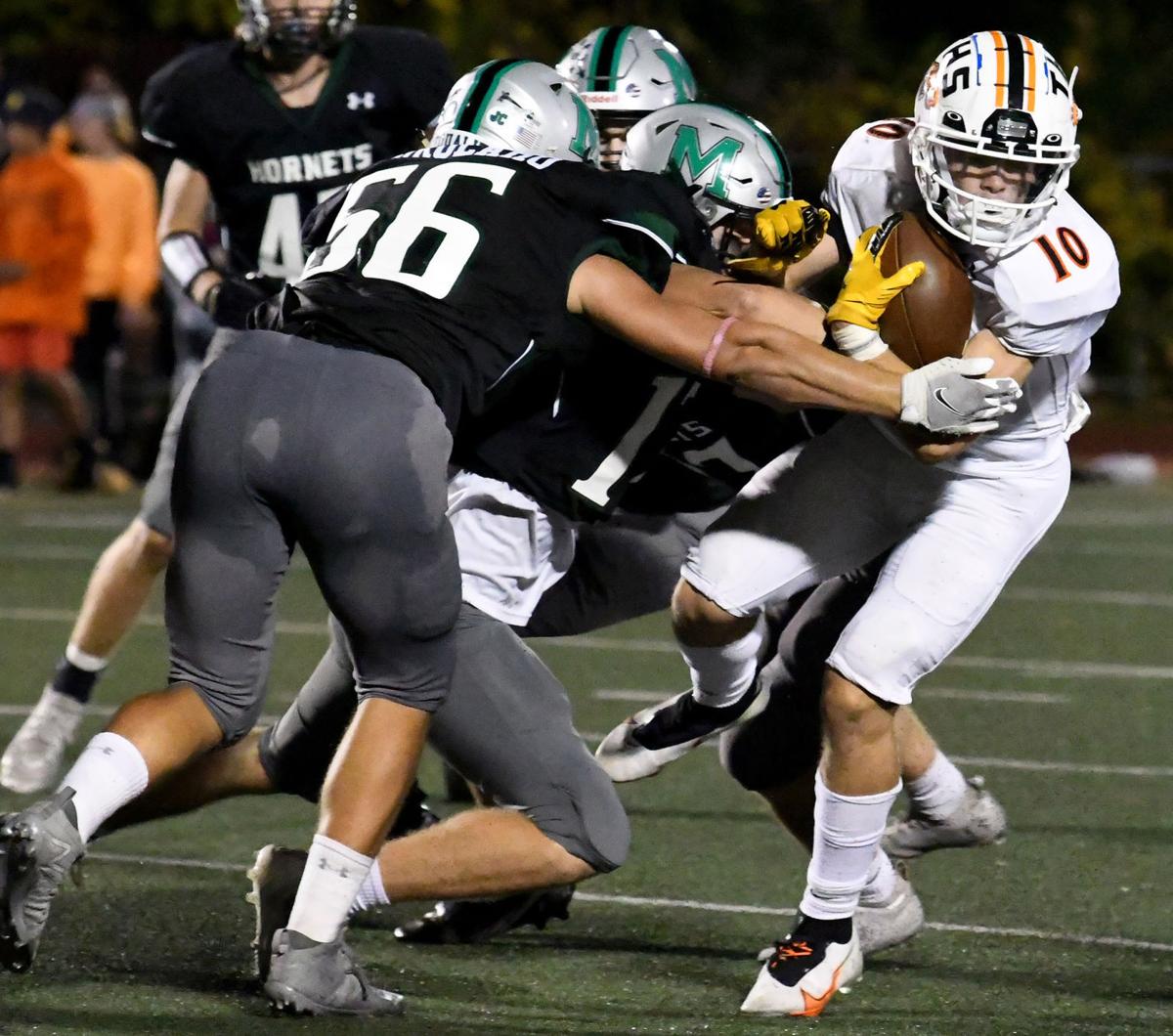 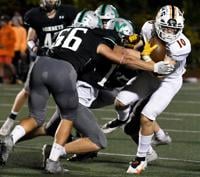 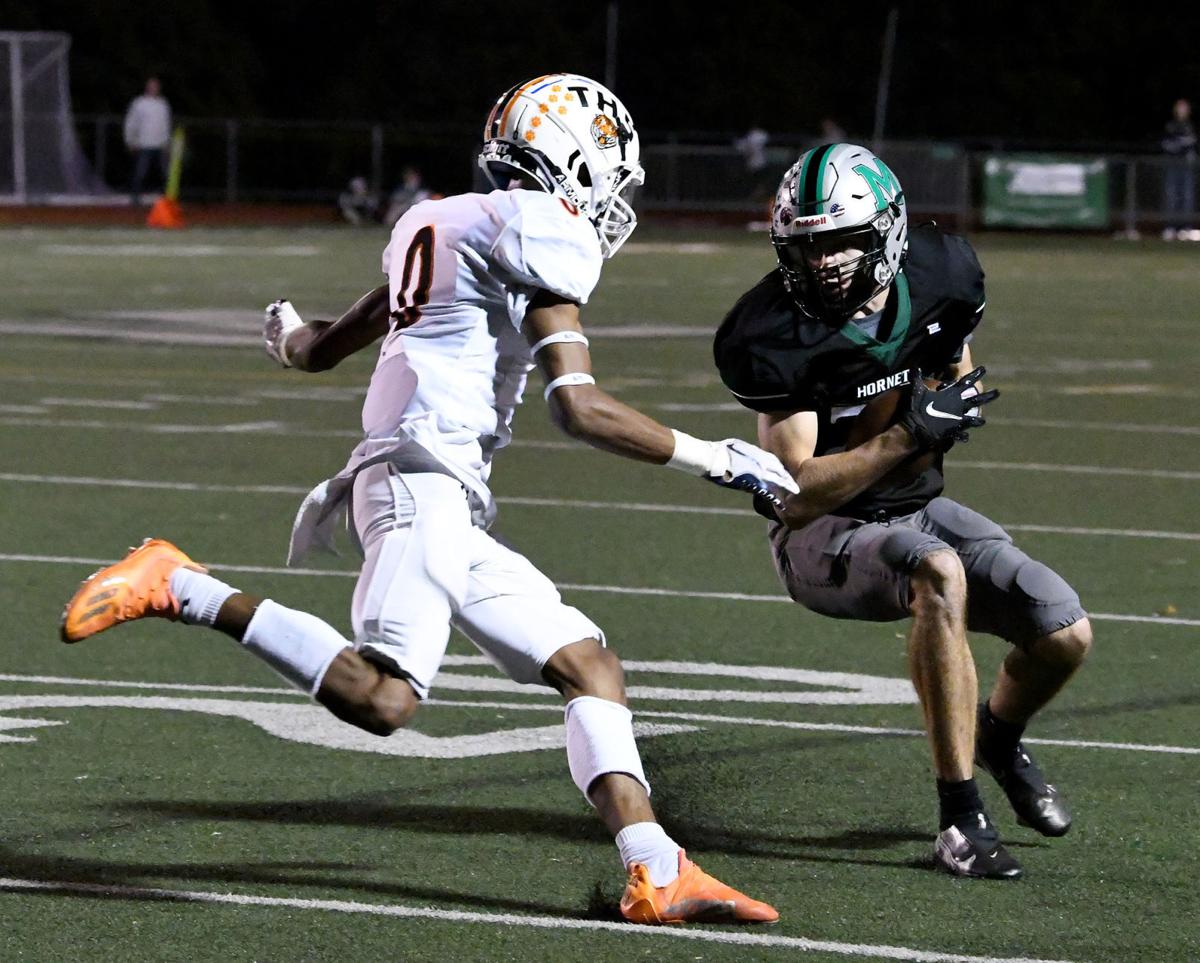 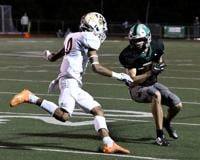 Mansfield High wide receiver James Fichera is brought down by a pair of Taunton High tacklers after making a catch Friday night in Mansfield.

MANSFIELD — When the offense was limited to merely one touchdown through three quarters of play, the Mansfield High football team certainly needed to rely on its defense in order to create a 24-8 victory over Taunton High Friday in their Hockomock League Kelley-Rex Division game.

Sophomore Trevor Foley and senior Mark DeGirolamo plucked off Tiger passes to derail the Tigers’ second and third offensive series of the second half, while a botched Taunton punt allowed Mansfield High to jump start its offense for 21 second-half points in taking victory No. 5 of the season.

The Hornets benefited from one Tiger miscue after another in turning the events into their favor — like the second half kickoff in which a Tiger returner slipped to the turf with his knee hitting the ground at the 6-yard line. A two-yard drop for a loss on Franklin’s first down by junior defensive lineman Jephte Jean continued that trend. On fourth down, a bad snap from center resulted in the Tiger kicker attempting to run with the ball.

Instead, he was tackled and Mansfield had the ball at the Tigers’ 14-yard line. Three plays later, junior QB Conner Zukowski tossed the first of his two TD passes to Foley, this one from 10 yards out.

Foley then swiped a Tiger pass at the Mansfield 46-yard line and DeGirolamo came up with another airball at the Taunton 20-yard line. The second takeaway resulted in a 42-yard, nine play drive that consumed 4:46 of the clock and resulted in 17-0 Hornet lead.

“We played great defensively, but they missed some shots,” Mansfield High coach Mike Redding said of the Hornets being able to fend off the Tigers. “We took advantage of the bad punt snap, that kind of changed the game.”

Rocco Scarpellini bulldozed his way into the end zone from 11 yards — with a gracious push over the final five yards by the entire Hornet offensive line.

Hornet senior kicker James Gilleran presented Mansfield with its only points out of four first half series (which began at the 30, 40, 27 and 28 yard lines) with a 32-yard field goal with just over two minutes left until intermission.

“We got the running game going a bit (65 first-half yards, 81 in the second half, but 22 carries were for gains of three yards or less),” Redding said. “We made some personnel changes, but we’ve got to be able to convert some third downs and shorts — it’s a weakness. We’ve got to be able to do that, it’s a key factor in close games.”

The Hornets created four QB sacks, the second by senior Pedro Cruz (for a 10-yard loss back to the Taunton 14-yard line) led to Mansfield’s third TD. The Hornets drove 40 yards on seven plays, consuming 3:34 of the clock with Zukowski and Foley combining again, this time from 19 yards out on the left side.

Cruz (five yards), James Fichera (10 yards) and Jean (one yard) each had a first half QB sack for the Hornets, who kept Taunton under wraps. The Tigers netted just 67 yards, 47 through the air out of four first half series, only once crossing midfield.

“It’s something that we’ve been fighting against, just plays blowing up again and again,” Taunton coach Brad Sidwell said of the Tigers being unable to convert three third down plays in the first half, netting just 33 yards on nine plays over their first four series of the second half.

“If we make a play in the first half or early in the second half, we’re still in the game,” Sidwell said of the 3-0 deficit by halftime.

The Hornets crossed midfield on two of four first half possessions, but failed to convert a fourth down and 3-yard chance on its first drive, then opted to punt on a fourth down and 2-yard scenario on its second series. Zukowski completed four of six passes for 43 yards in the first half, the Hornets having a 15-8 advantage in time of possession in each half.

The Hornets next travel to Macktaz Field to meet the King Philip Warriors Friday.