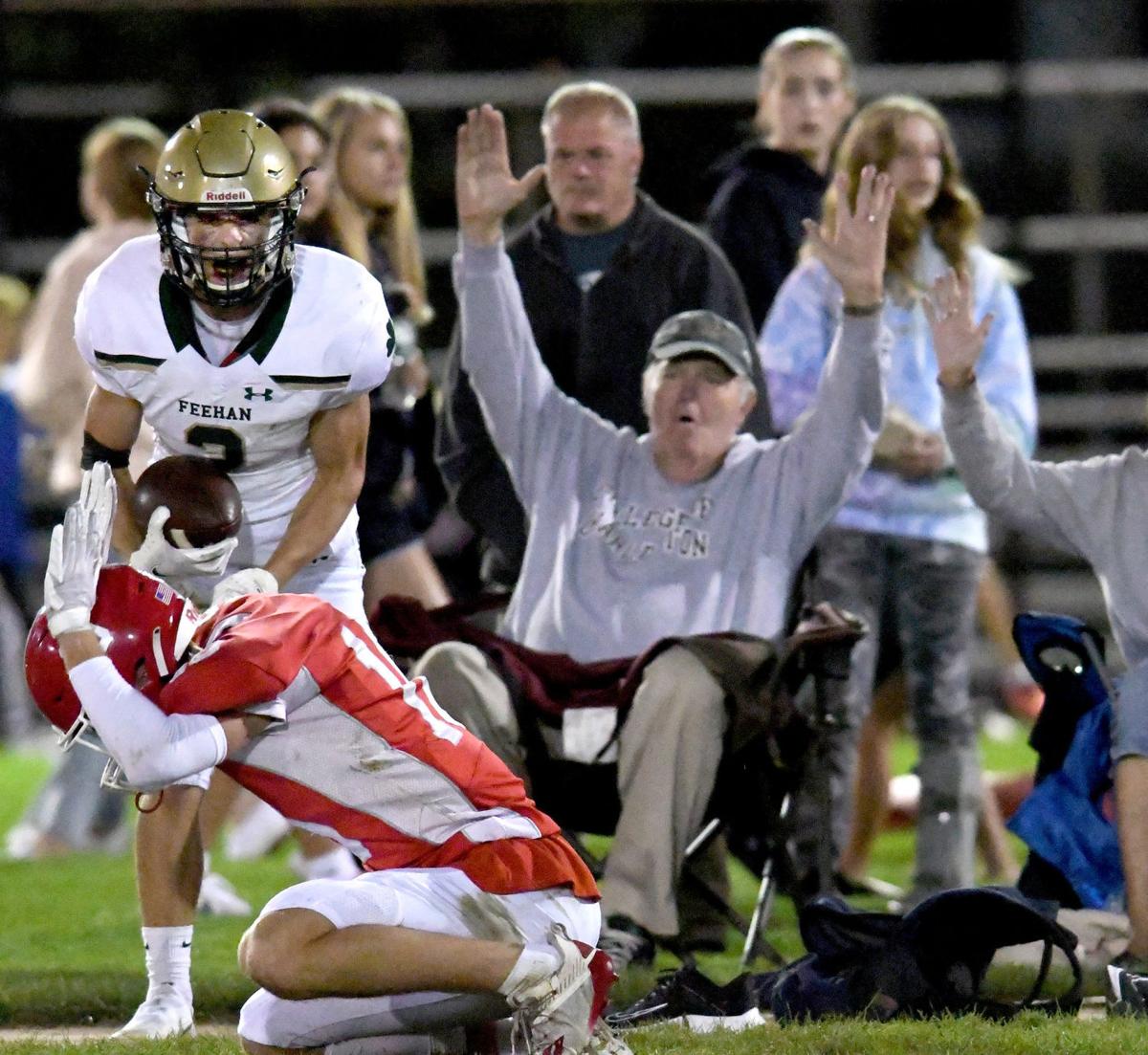 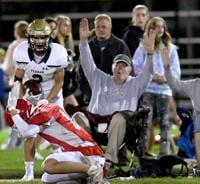 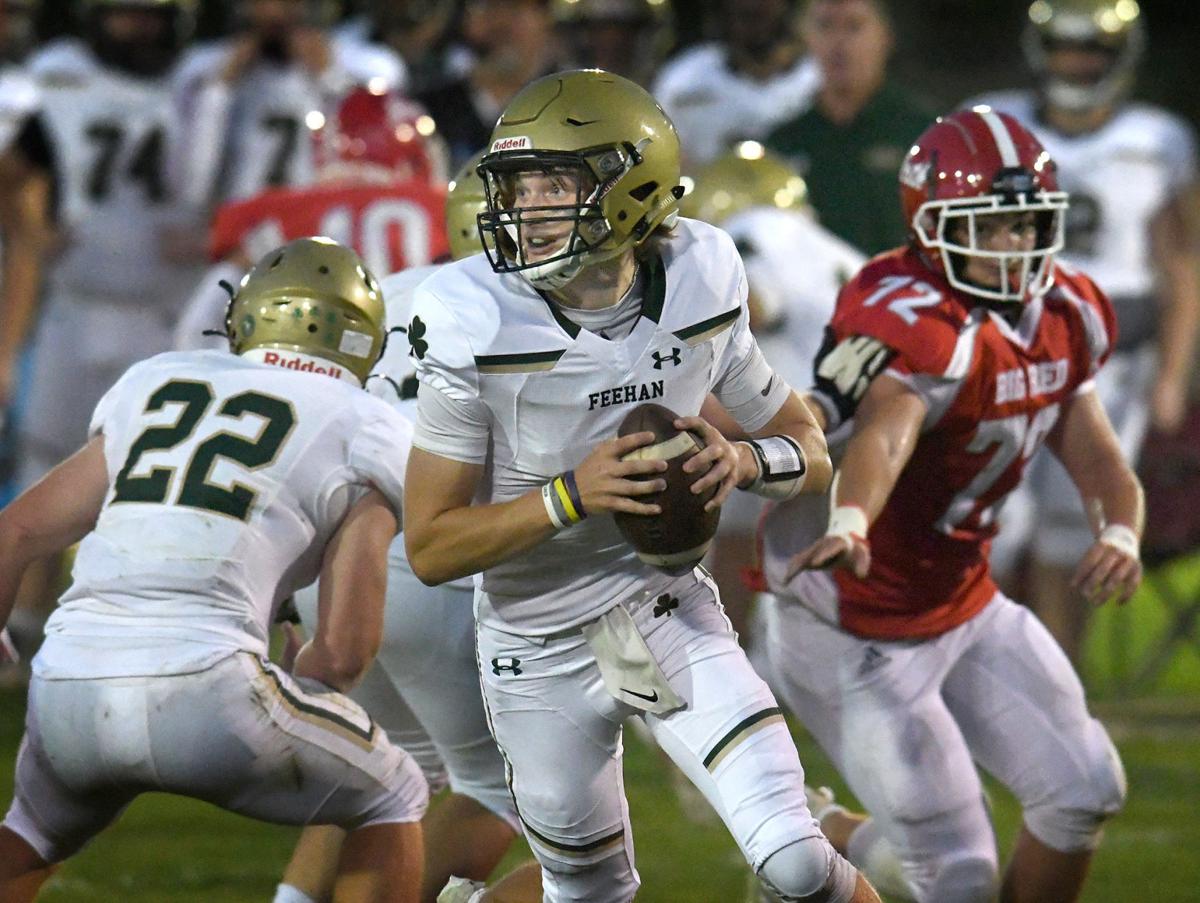 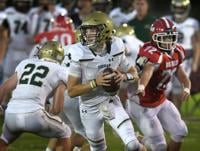 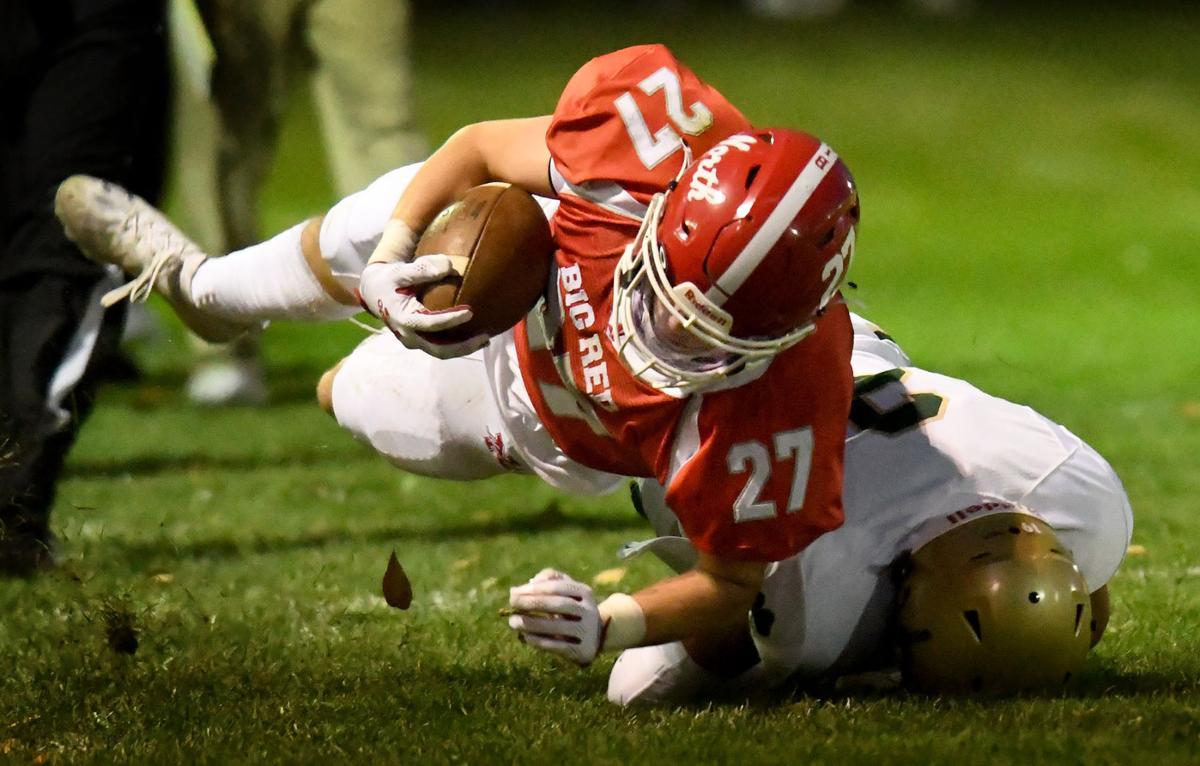 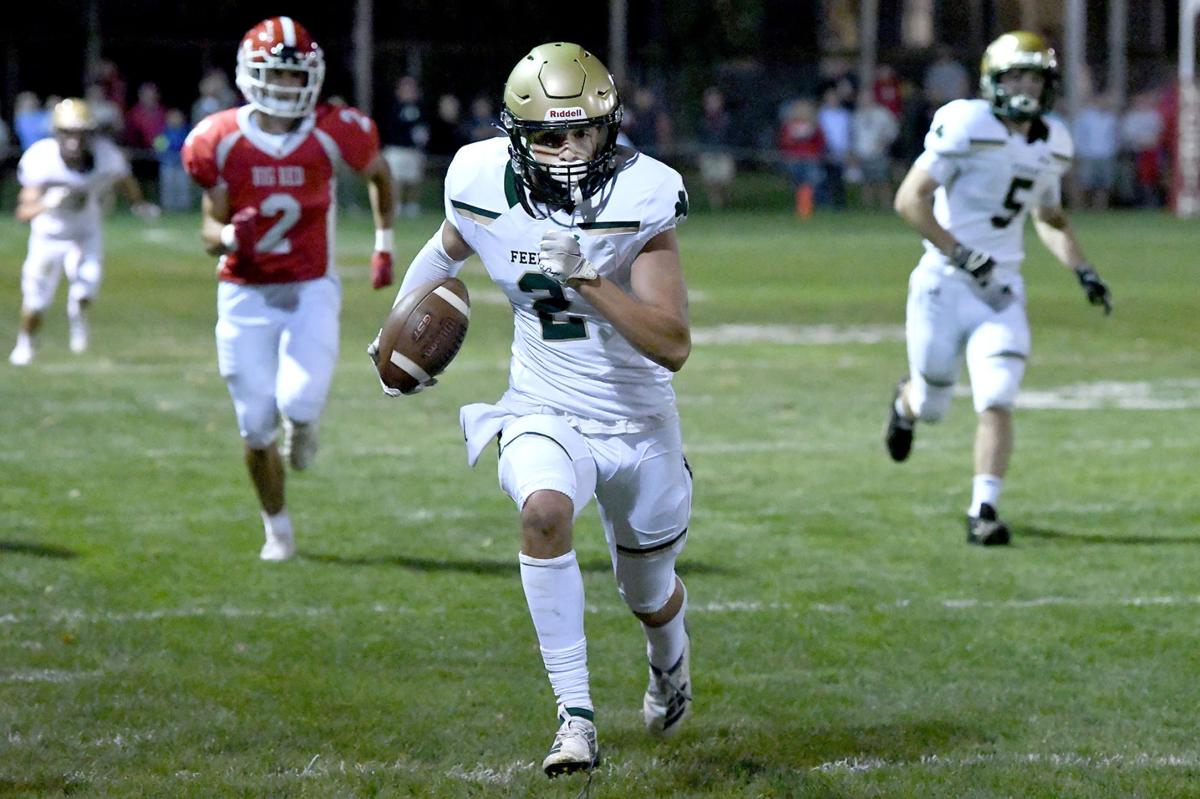 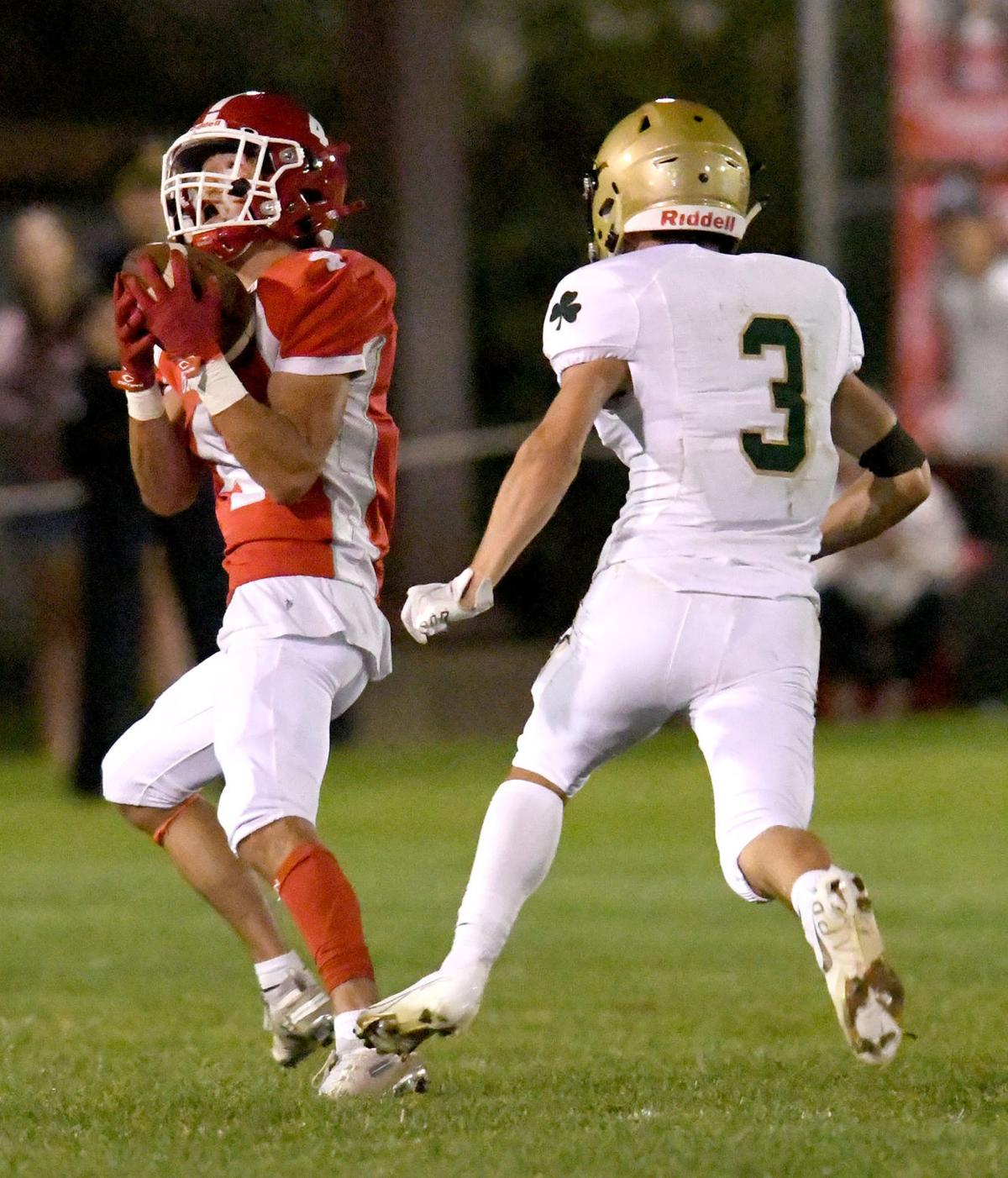 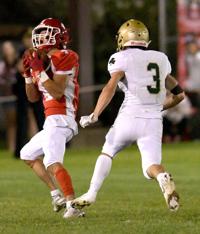 North Attleboro High’s Danny Curran hauls in a Tyler DeMattio pass to set up for a first down in Bishop Feehan High territory in the second quarter as Shamrocks defensive back Connor McHale pursues Friday night in North Attleboro.

North Attleboro High’s Danny Curran hauls in a Tyler DeMattio pass to set up for a first down in Bishop Feehan High territory in the second quarter as Shamrocks defensive back Connor McHale pursues Friday night in North Attleboro.

NORTH ATTLEBORO — The Bishop Feehan High School football team certainly created a favorable impression upon its family and friends at Community Field at the expense of the Rocketeers of North Attleboro High Friday in the season opener for both teams.

“We got manhandled on both sides of the line of scrimmage,” North Attleboro coach Don Johnson attested to the Shamrocks’ strength and execution. Yanchuk rushed for 118 yards on 16 carries during the first half and then added another 101 yards in the second half on eight carries.

“They just executed better than we did on both sides of the ball,” Johnson added.

“And we can’t give another team 17 points on turnovers,” Johnson said. “We have a lot of work to do.”

North Attleboro senior quarterback Tyler DeMattio rushed for 84 yards, including a 51-yard TD scamper midway through the third quarter which reduced the Shamrock lead to 17-10. DeMattio also added a 29-yard field goal in the final minute of the first half, but he was able to complete just five passes.

“We have a good offensive line, we had a good plan on defense, I give my assistant coaches all the credit,” Pinabell surmised, the Shamrocks having a 10-3 lead at intermission. “Our kids were incredibly focused.”

Bishop Feehan dramatically took the lead on its third offensive set of the game, a 97-yard, six-play drive with Yanchuk following a block by 240-pound junior left guard Tristen Upton for the go-ahead six points. In that drive, Crump completed a 38-yard pass to McHale along the left sideline to advance the ball to the North 36-yard line.

Three plays later, the Shamrocks regained possession of the ball as Canuel plucked off a Rocketeer pass. Bishop Feehan then drove 35 yards on seven plays, a personal foul penalty taking away a six-point chance, but allowing for McCaffery to demonstrate his exceptional kicking skills with his first field goal of the season.

And four plays into the second half, the Shamrocks once again created a takeaway. Yanchuk tipped a North pass into the air and gingerly caught the ball at the Bishop Feehan 40-yard line. The Shamrocks needed just three plays to travel the remaining 45 yards for six more points, Yanchuk following a block by Mankins, the left tackle, for a 33-yard scoring romp.

The Shamrocks weren’t finished, making it 3-for-3 on takeaway conversions. Bishop Feehan ended North’s third series of the second half with McHale taking away a halfback option pass by the Rocketeers at the Shamrock 10-yard line.

The Shamrock defense did not allow an aerial yard through the second half, while 13 of North’s 23 rushes were for gains of three yards or less.

“That’s a good way to start the season, it’s one game, one win,” Pinabell said. “But, we have another tough rivalry game next week (home against Attleboro). North, meanwhile, will entertain Mansfield.