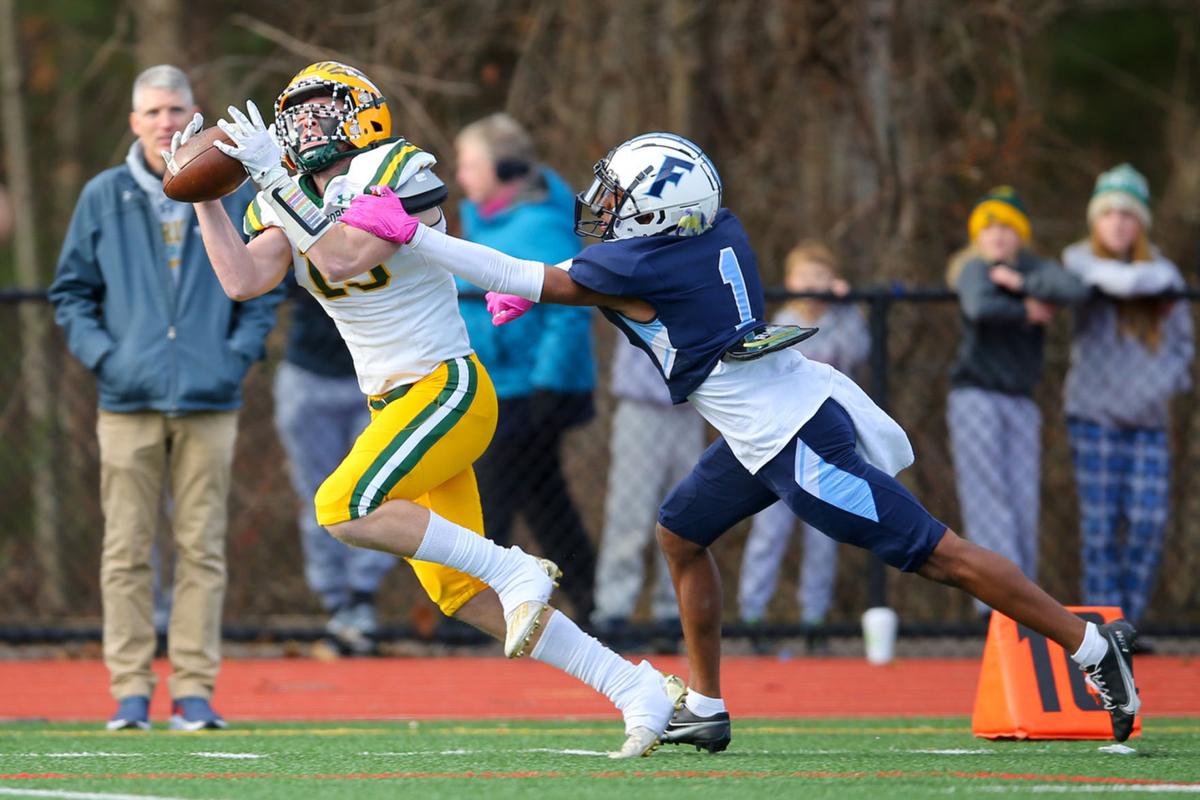 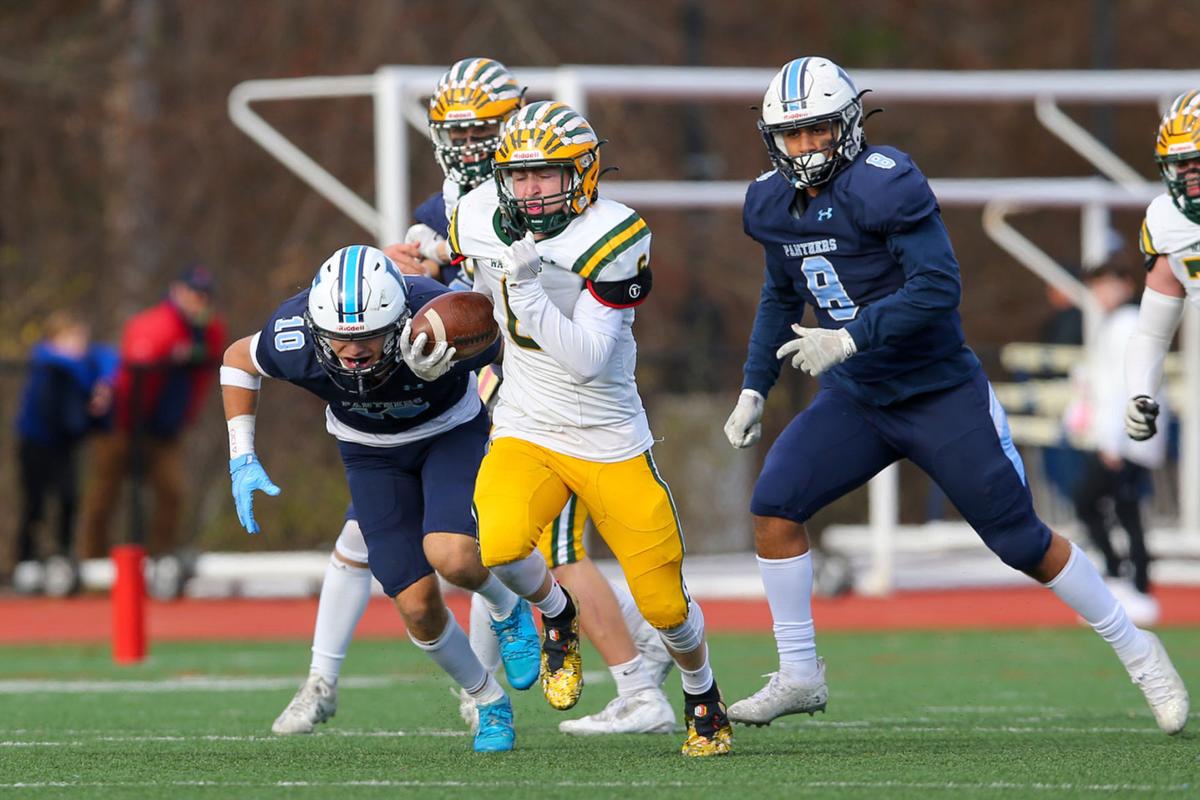 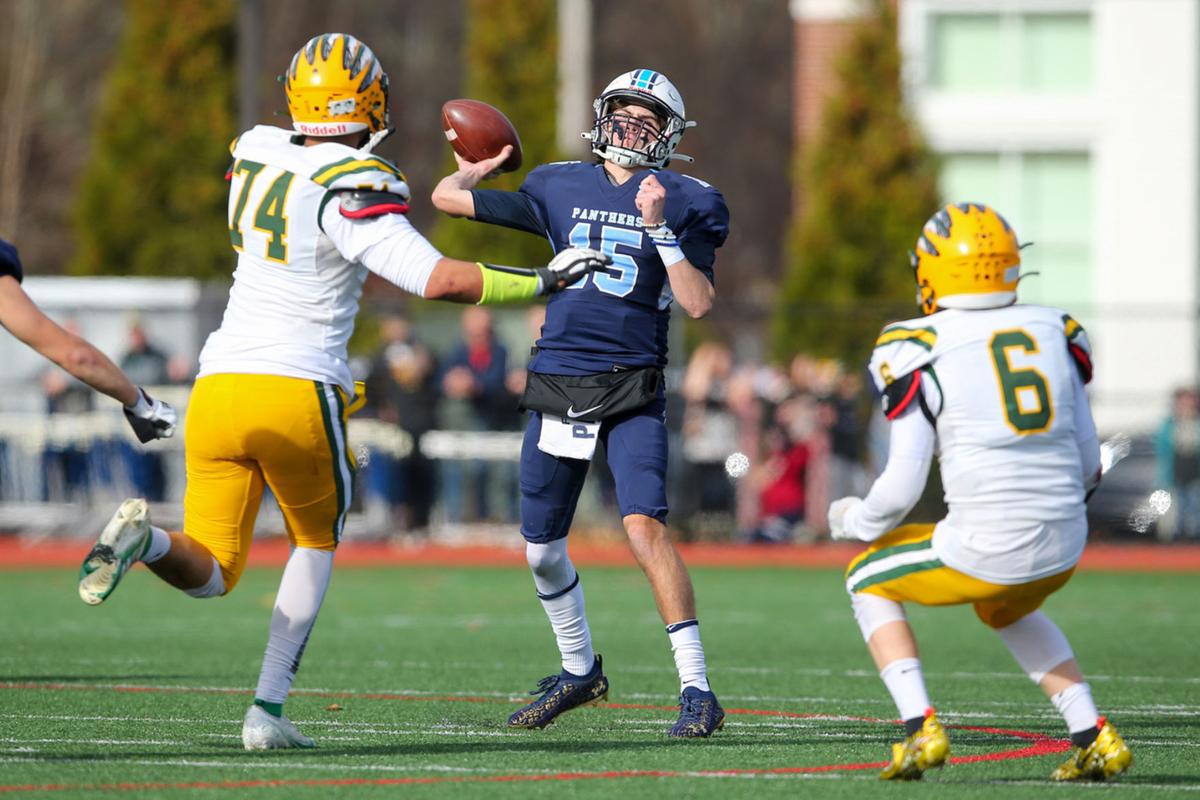 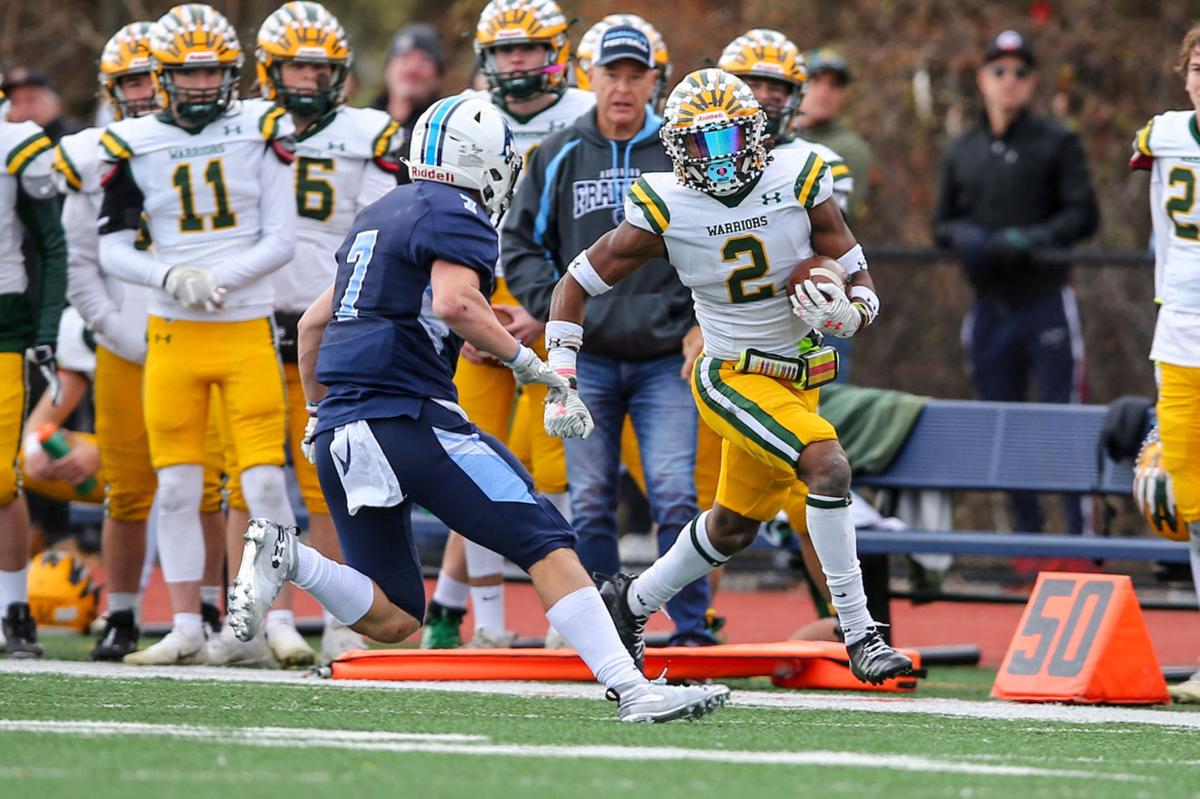 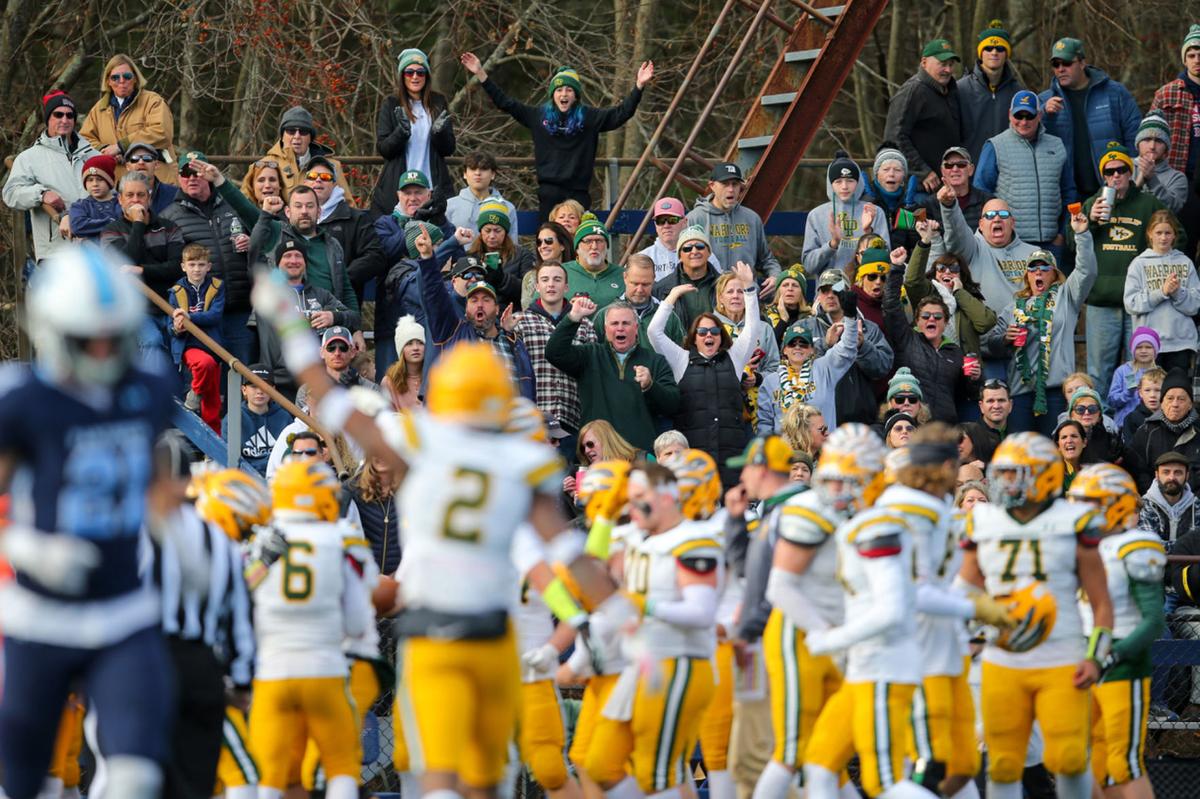 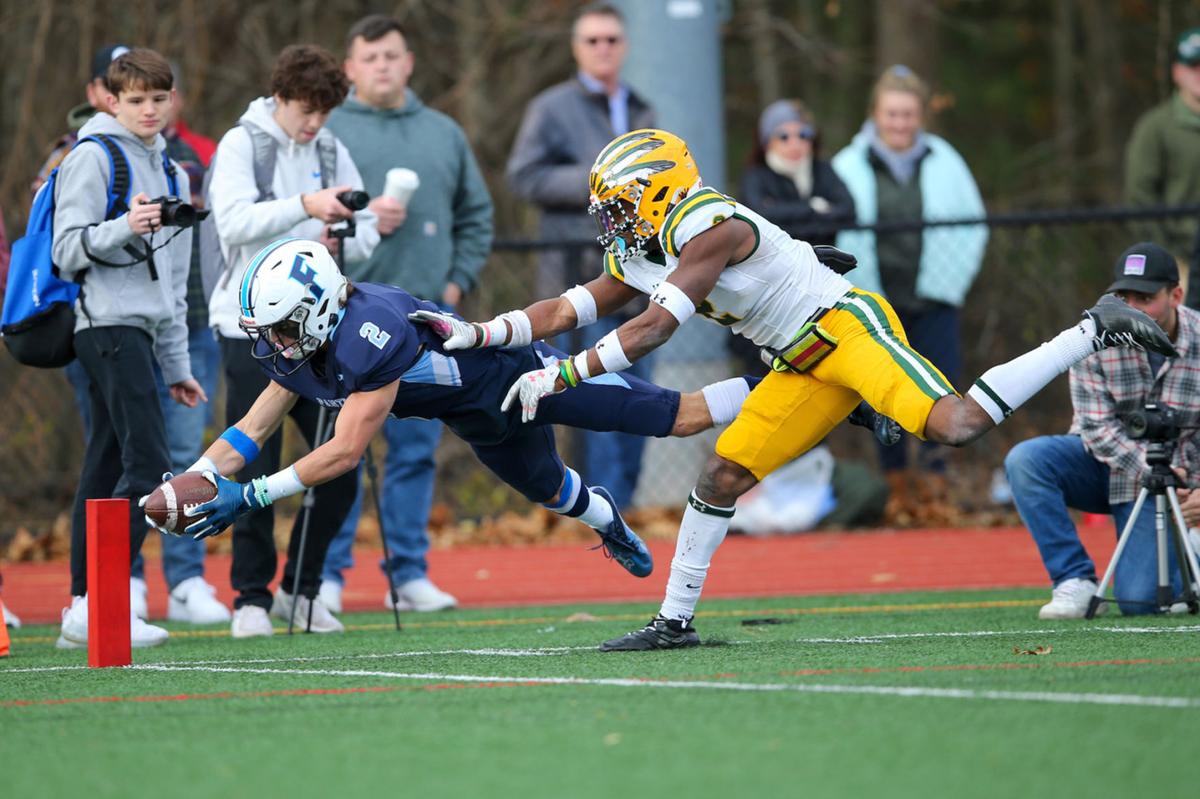 Franklin High wide receiver Shane Kindred (2) dives for a touchdown as King Philip High defensive back Crawford Cantave (2) defends on the play during their game Thursday in Franklin.

Franklin High wide receiver Shane Kindred (2) dives for a touchdown as King Philip High defensive back Crawford Cantave (2) defends on the play during their game Thursday in Franklin.

However, the Panthers scored a trio of unanswered first-half touchdowns to take a 19-14 lead and produced a late third quarter TD, eventually holding off the Warriors, 27-20.

Franklin (10-1) claimed the Kelley-Rex Division title of the Hockomock League in the winner-take-all showdown with the Warriors (9-2) as both teams entered the game with 4-0 records.

Franklin quarterback Jared Arone completed 11 of 17 passes for 231 yards and three TD’s, while Mack Gulla gained 109 yards on the ground on 16 carries for the MIAA Division 1 Super Bowl semifinalist Panthers.

“It’s hard enough playing one tough game (Milford in the Division 2 semifinals), then to come back and play for a league championship and then have to play one of the best teams (Catholic Memorial) in the state for the Super Bowl,” King Philip coach Brian Lee said.

Facing a 19-14 halftime deficit, King Philip regained the lead (at 20-19) 4:14 into the third quarter on its first offensive set on a 6-yard run by Canatave.

Franklin regained the lead at 27-20 on its second series of the second half with Shane Kindred scoring from seven yards out before Arone rushed for the two conversion points.

The Warriors were unable to produce points on its final three series of the game, turning the ball over on downs, losing possession of the ball on a fumble and again on downs. With 2:28 left in the fourth quarter, King Philip crossed midfield, but was unable to convert a fourth-and-1 situation at the Panther 42-yard line.

The Warriors drove 76 yards on four plays on its first series to take the lead on a 5-yard TD pass from Grant to tight end Drew Danson with 8:50 left. Matt Kelley then hit the first of his two conversion kicks.

The Warriors marched down the field again, after recovering a Franklin fumble on the Panthers’ first play from scrimmage.

King Philip then drove 34 yards on four plays, gaining a 14-0 lead on a 1-yard plunge by Grant with six minutes still left in the quarter.

King Philip had won 10 straight on the holiday and 18 in a row overall, including the regular-season games.

The Warriors totaled 307 yards of offense, ran 16 more plays (56-40) than the Panthers, accumulating 17 first downs and had decisive advantage in time of possession (28-18).

Franklin had only one turnover and was not penalized during the game.

Chris Sesay, Will Astorino and Gately each were in on four tackles defensively for King Philip. Sesay had one sack for a 2-yard loss, while Jake Sullivan and Nate Kearney combined on another.