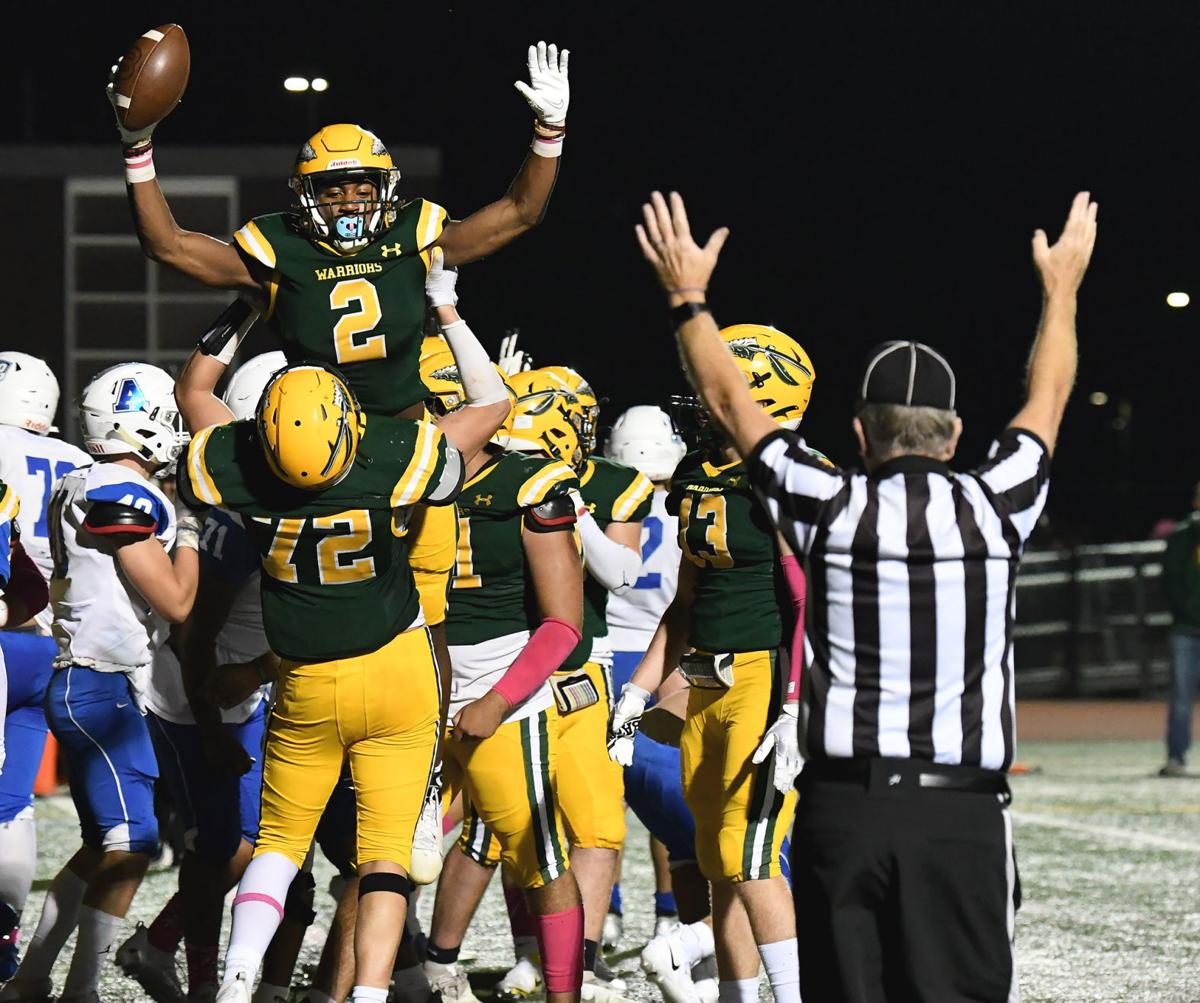 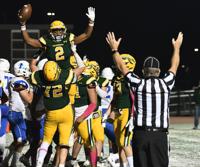 King Philip Regional High’s Hunter Hastings (72) lifts teammate Crawford Cantave into the air after Cantave scored a touchdown against Attleboro High in a game in October. 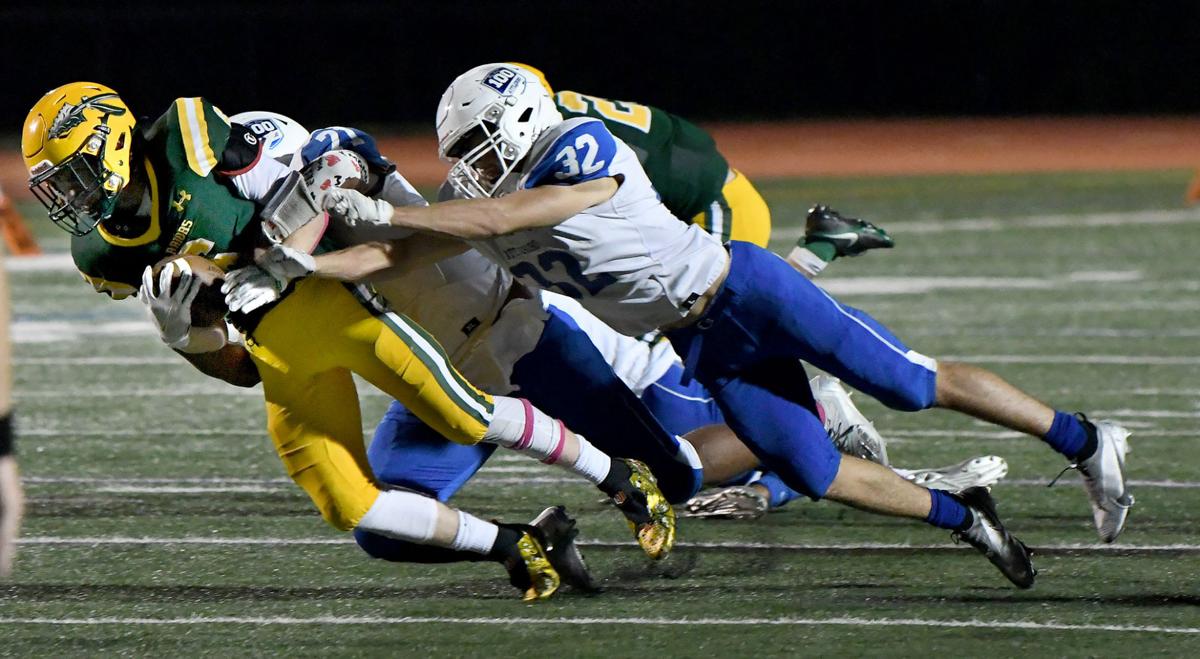 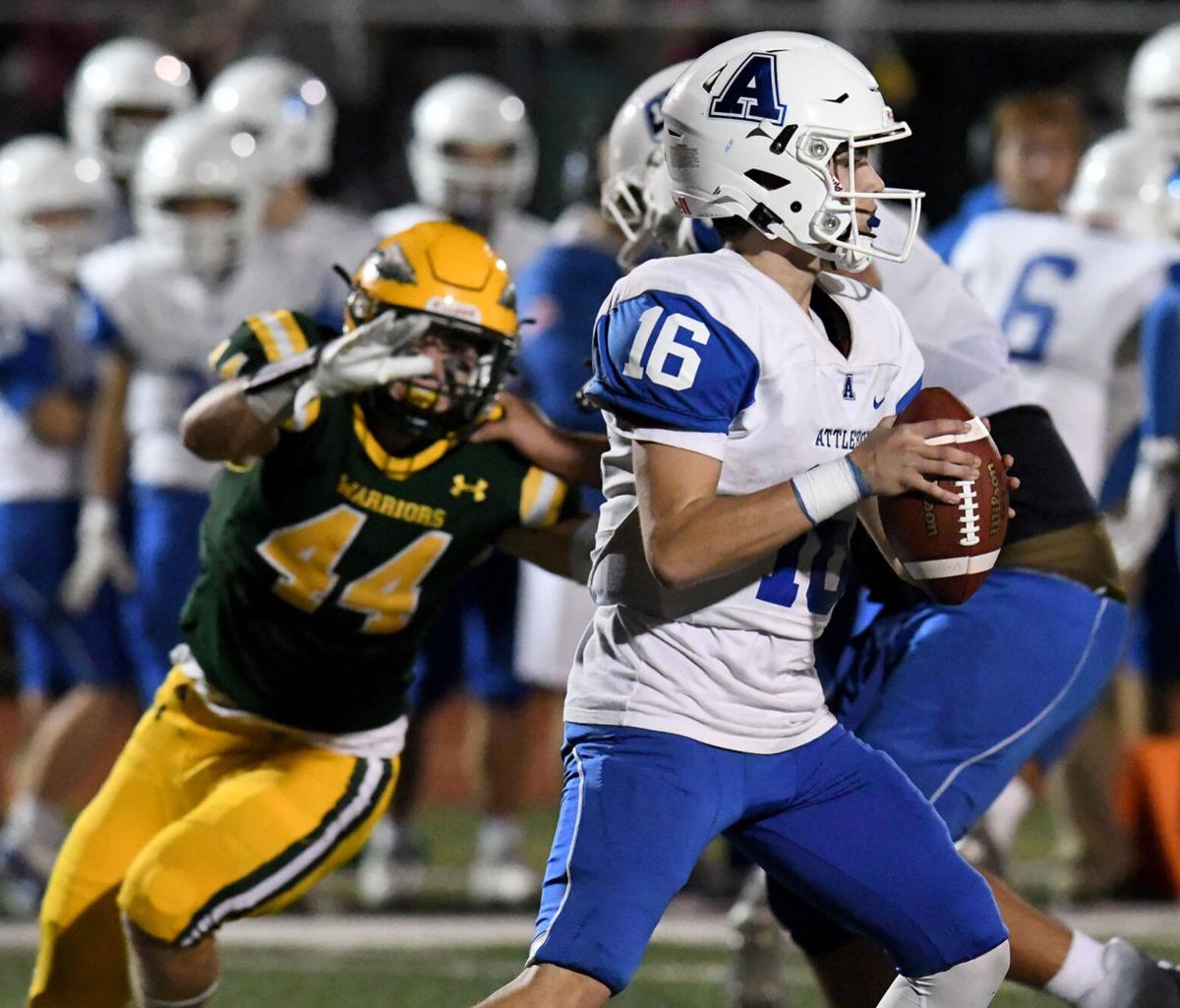 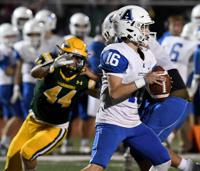 Attleboro High quarterback Matt Harvie looks for a receiver as King Philip Regional High’s Nathan Kearney closes in from the blind side during an Oct. 8 game.

King Philip Regional High’s Hunter Hastings (72) lifts teammate Crawford Cantave into the air after Cantave scored a touchdown against Attleboro High in a game in October.

Attleboro High quarterback Matt Harvie looks for a receiver as King Philip Regional High’s Nathan Kearney closes in from the blind side during an Oct. 8 game.

WRENTHAM — The King Philip Regional High football team once again was most opportunistic and resourceful in hanging on to a 30-22 donnybrook of a Hockomock League game over Attleboro High at Macktaz Field.

The Warriors scored points on all three of their first-half series, all three in remarkable fashion — an 82-yard, 17-play series that consumed 9:13; converting a shanked Bombardier punt for a 29-yard scoring drive; and then turning a Nick Viscusi interception into a 26-yard scoring drive.

But no 20-0 lead is sacred in the Hockomock League.

Alas, the Warriors (4-1) held onto their hats and collective breaths as the Bombardiers (1-3) battled back by converting an Anthony Salviati blocked punt into the first of two second half TDs by Kaiden Murray and watched as Logan Briggs ran up the middle, ran left, ran right and back across the field for an 81-yard six-point romp with four minutes left in the third quarter to narrow the gap to 23-15.

“The same old story, we kind of put them away in the first half and we let them right back in it,” KP coach Brian Lee said of the second half squirmer. “With that level of play, you’re not going to beat anybody, you’re not going anywhere (in the MIAA playoffs).”

Four plays into the second half, Salviati barged through the KP line to block the Warrior punt and Hayden Hegarty recovered the ball, advancing it to the KP 2-yard line.

The Bombardiers became even more energetic and electrified as two plays into their second series of the second half, Briggs defied the KP defense with his 81-yard scoring romp.

And never to succumb, AHS denied King Philip of a first down with a fourth down hold and then drove 60 yards on 10 plays to score again, Murray scoring from four yards out behind senior captain and 285-pound left tackle Chris Leonardo.

“I’m proud of the kids, the way that they responded in the second half, they tried to make things happen,” AHS coach Mike Strachan said. “We can build off of this.”

King Philip used a Matt Kelley 23-yard field goal midway through the third quarter and the second TD toss by QB Charles Grant (nine completions for 175 yards), that a 35-yard strike to Tom Brewster to create a 30-15 lead.

The Warriors, seemingly, left the Bombardiers broken by halftime, AHS never advancing beyond the KP 48-yard line until the final play of the first half and being limited to 85 net yards of offense as well.

King Philip needed just four plays after the botched Bombardier punt to take a 14-0 lead as QB Charles Grant completed a TD toss to Will Astorino for seven yards and Matt Kelley converted the second of his three conversion kicks.

Viscusi’s aerial theft at the AHS 34-yard line set up KP for a third score. Moreover, it was a fourth down pass from Grant to Jonathan Joseph, good for 24 yards to the AHS 6-yard line that set up a Crawford Cantave 1-yard TD run.

The Warriors twice converted fourth down plays and a third down play into first downs during their glorious first offensive set, resulting in a 1-yard TD plunge by Ryan Gately (87 yards on 22 carries). During that drive, Grant completed a third down pass to Tom Brewster for eight yards and a first down at the AHS 43-yard line; Grant completed a fourth down pass to Astorino, good for 15 yards to advance the ball to the AHS 20-yard line; then Grant converted a fourth down and one-yard situation with a plunge behind 245-pound senior center Dan Nineve to advance the first down chains.

“That was all stuff that we go over and over again,” Strachan said of the Bombardier miscues, also resulting in poor field position (at the 35, 17, 8 and 12-yard lines) to begin first half drives. “It’s stuff that we’ve been teaching for nine years.”