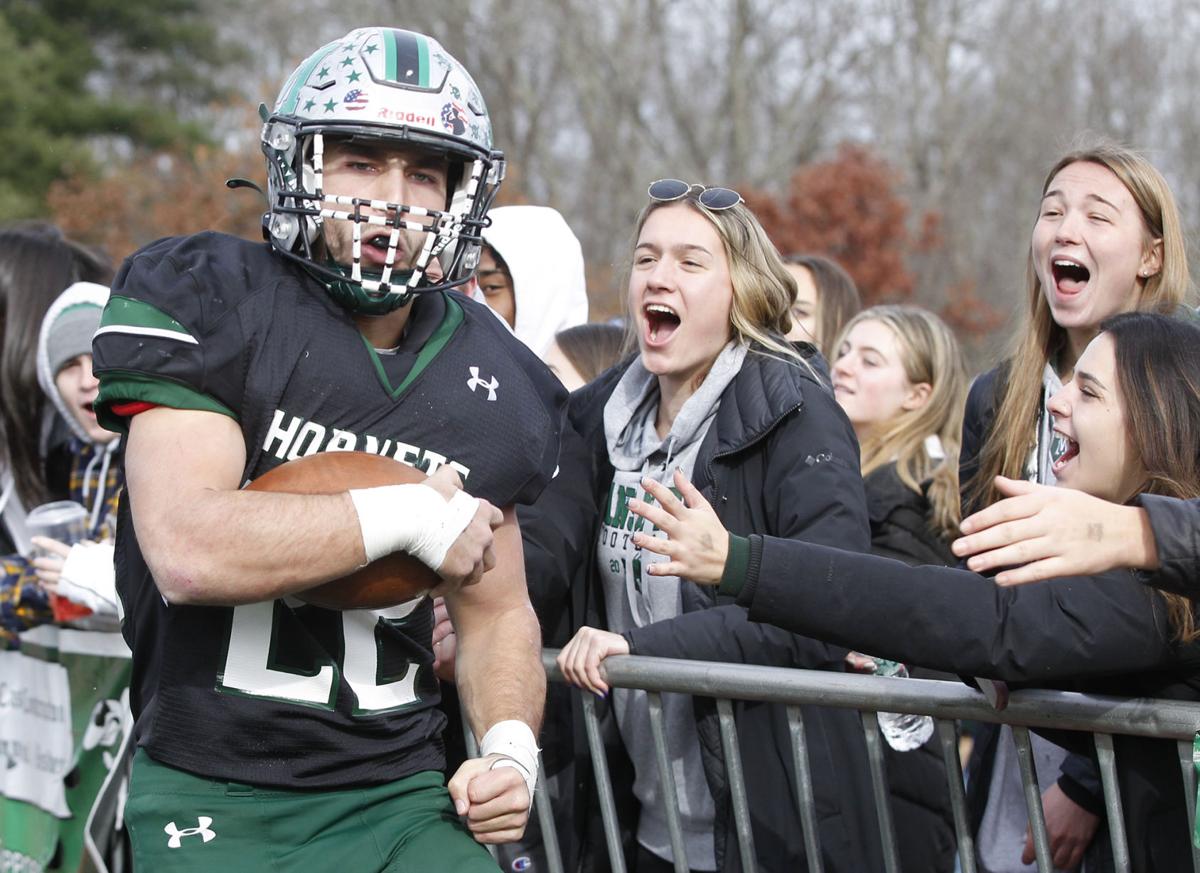 Mansfield High’s Rocco Scarpelini runs along the end zone in front of cheering fans after rushing for a touchdown against Foxboro High during the third quarter Thursday in Mansfield. 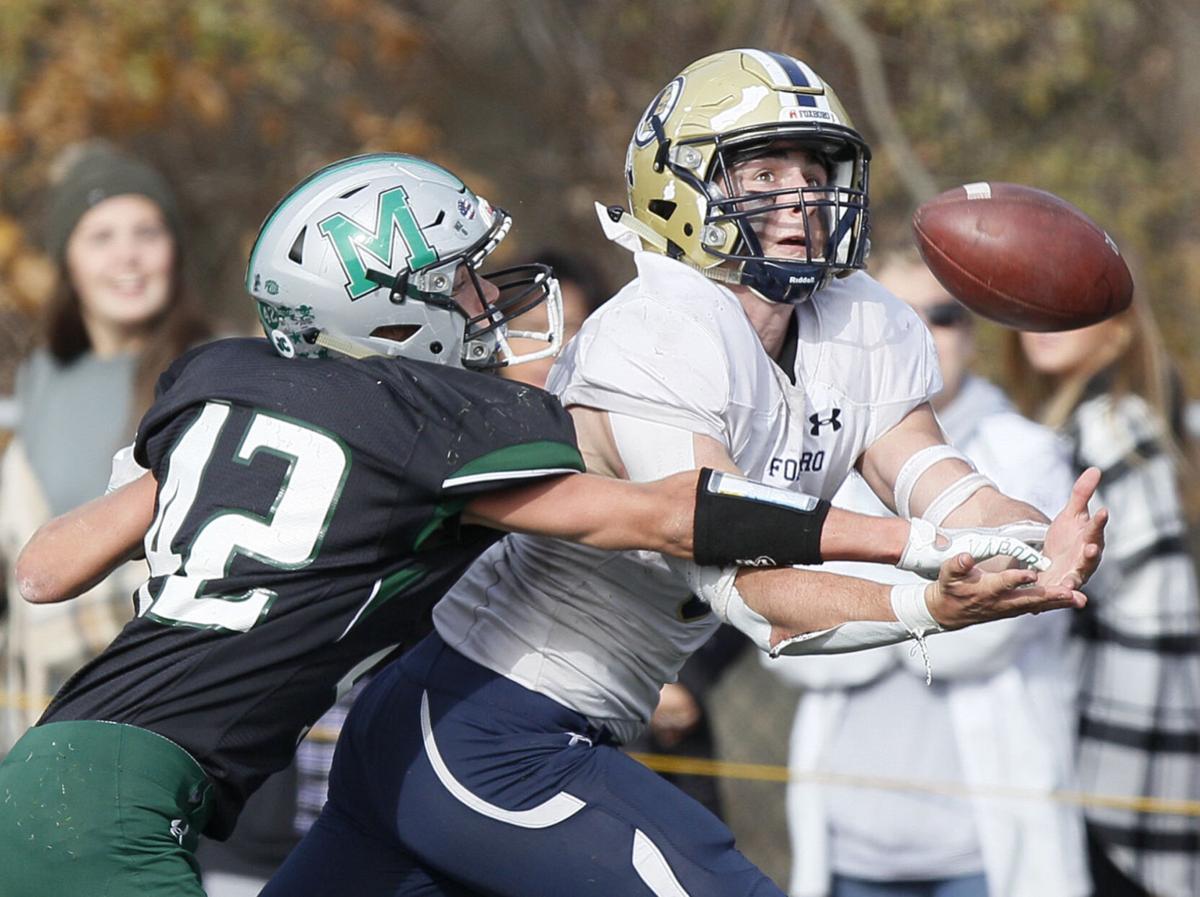 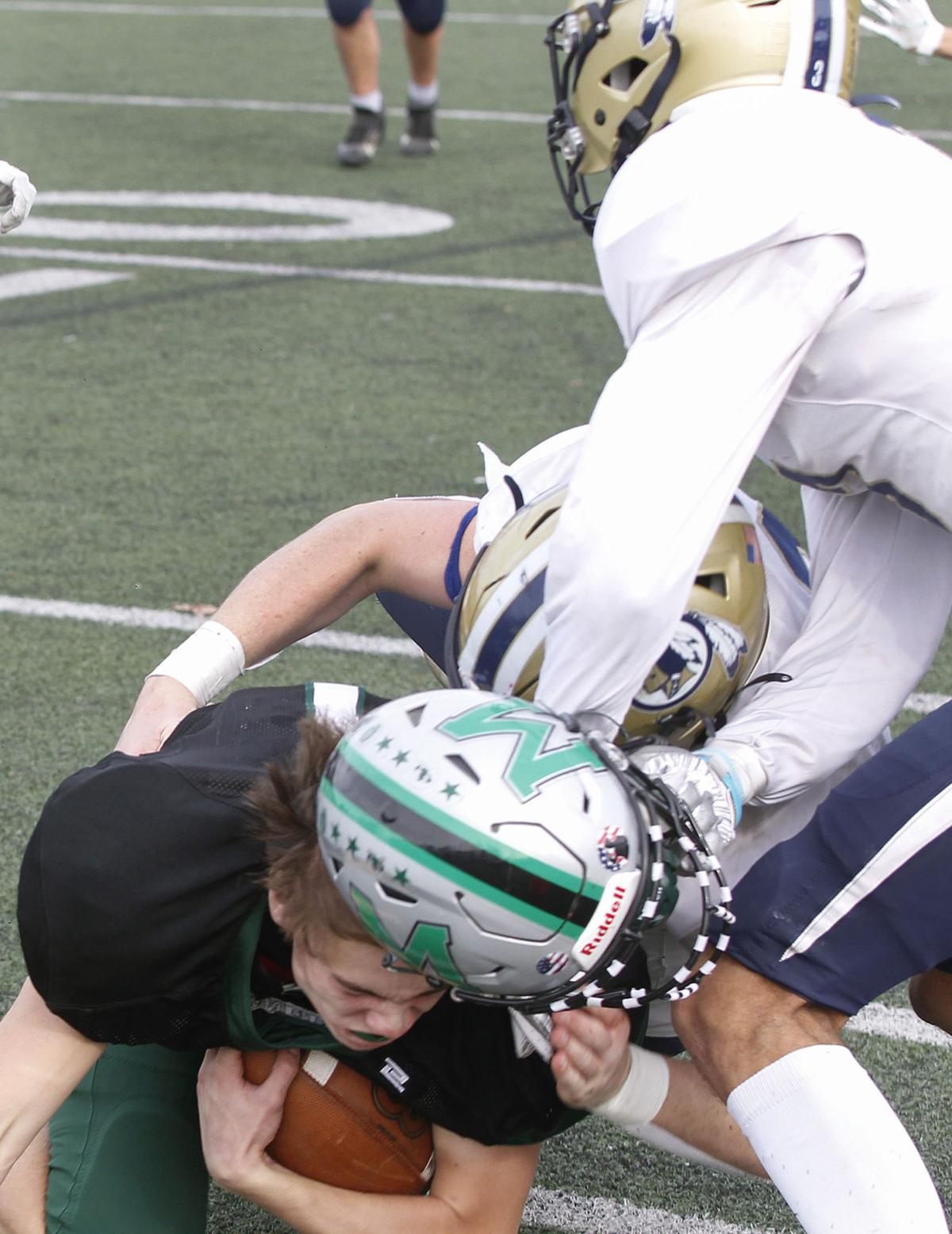 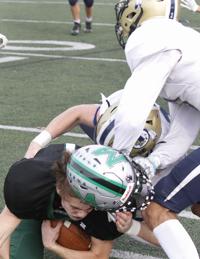 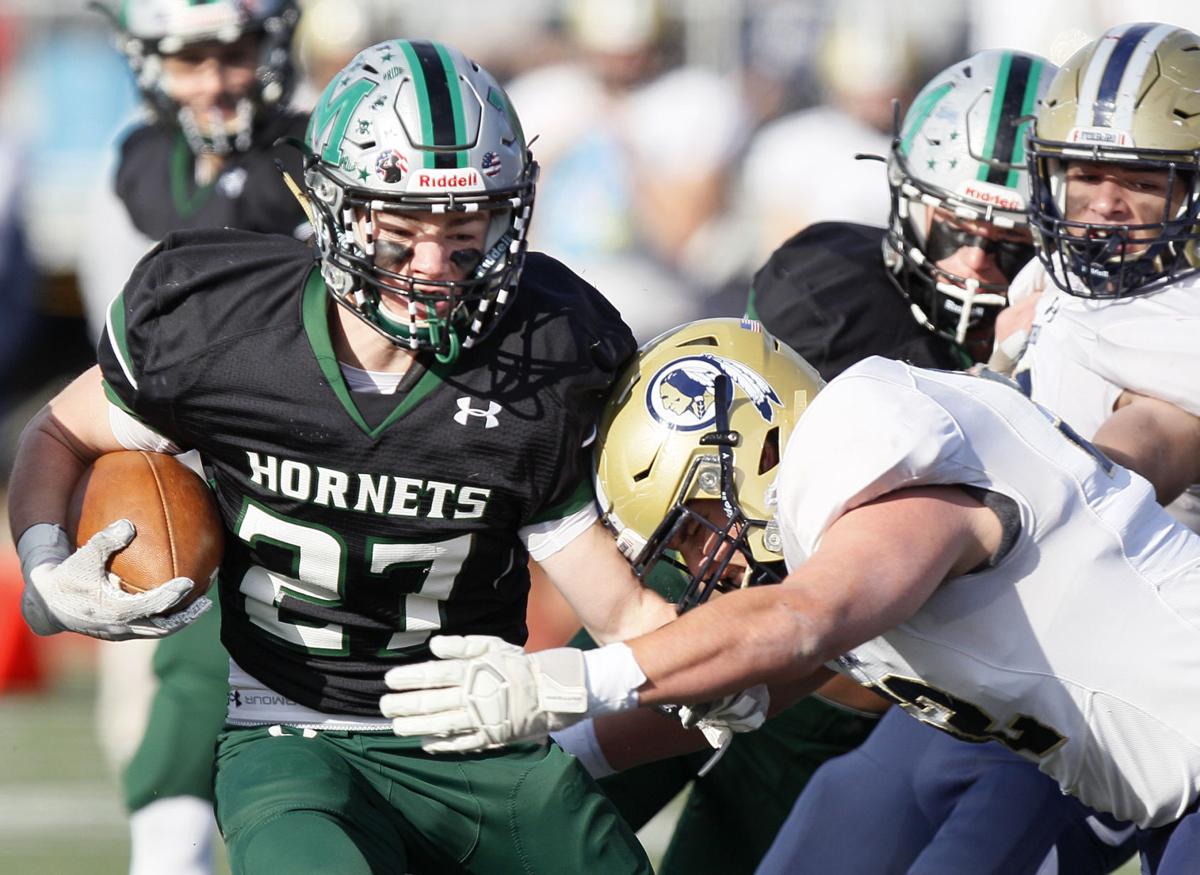 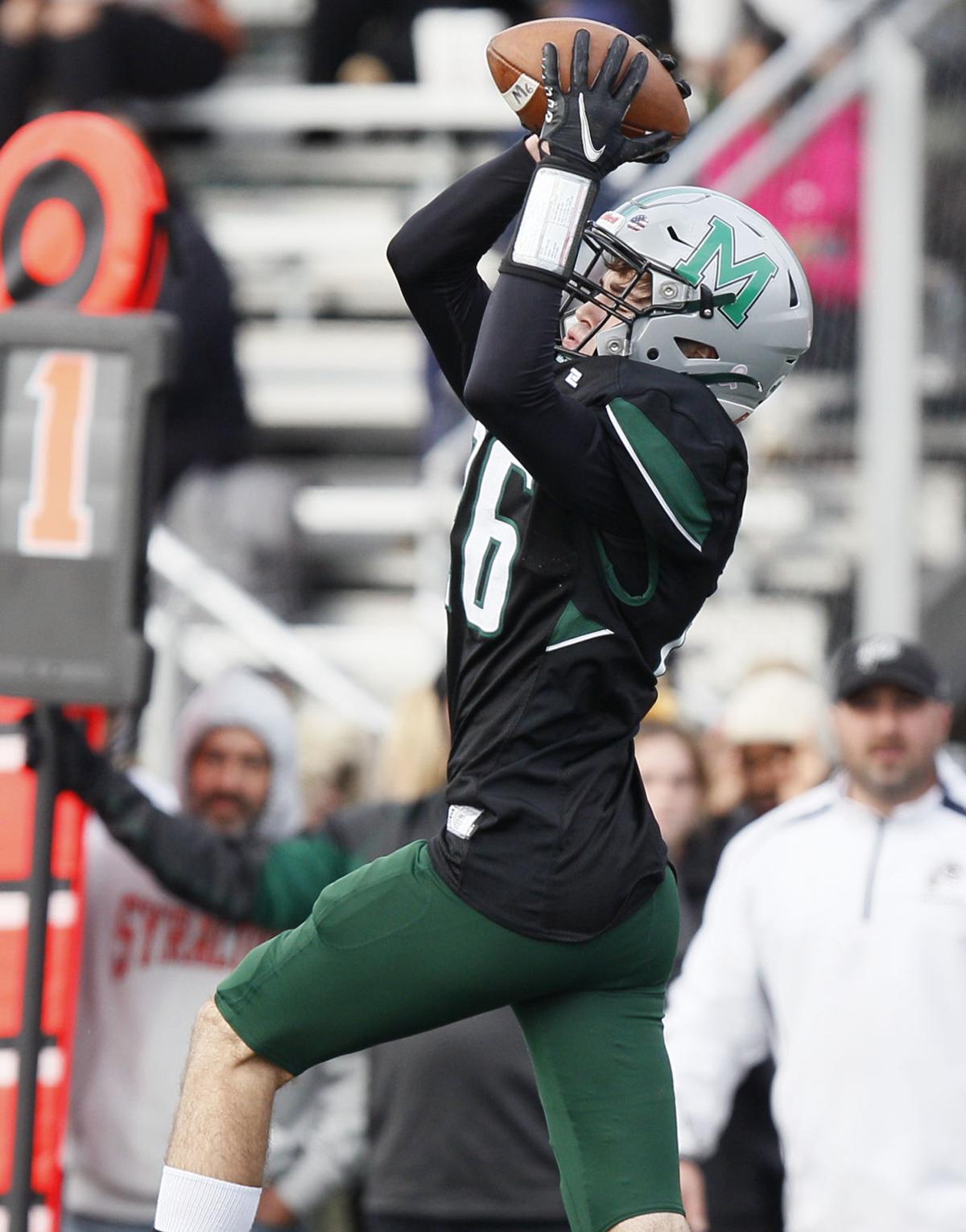 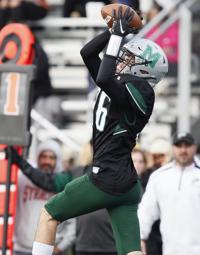 Mansfield High's Trevor Foley makes a reception against Foxboro High during the fourth quarter in Mansfield. 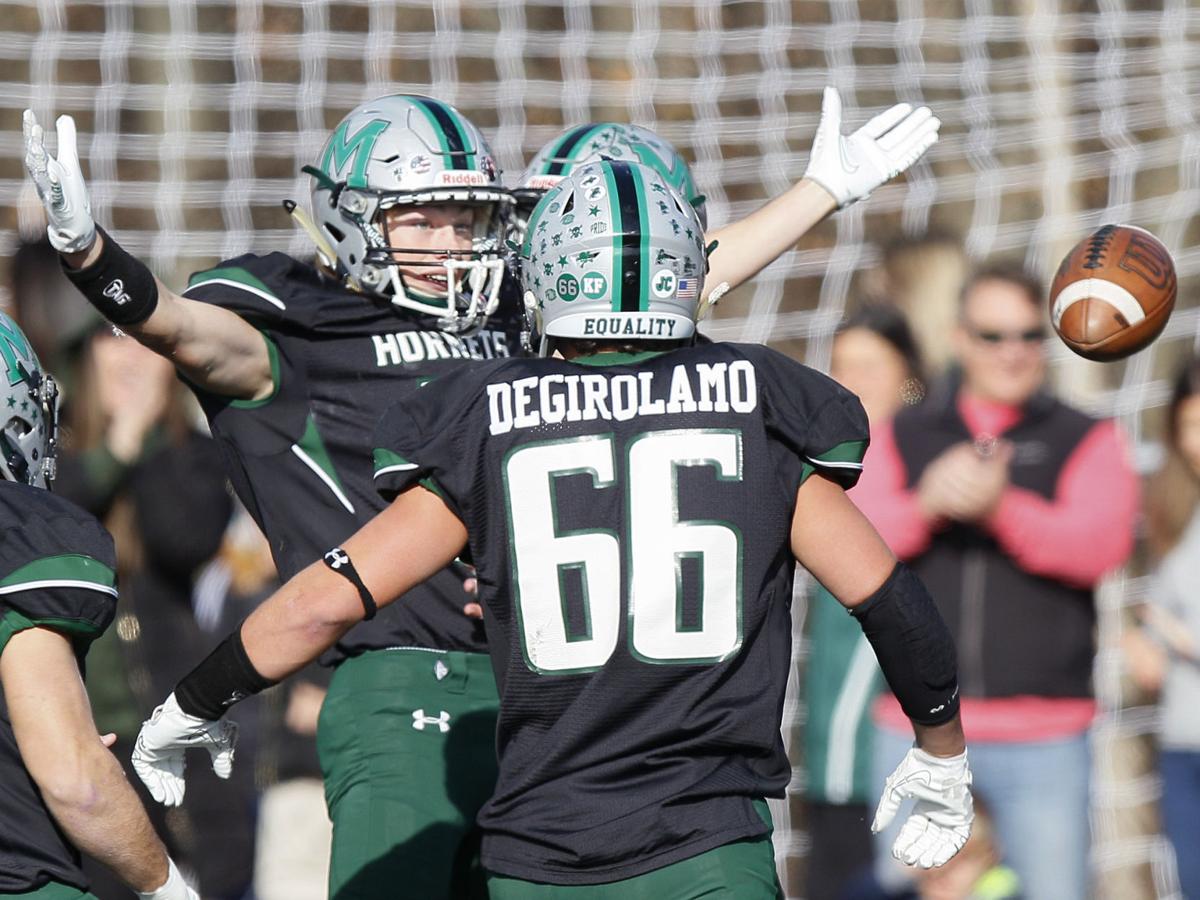 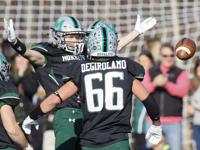 Mansfield High's Ryan DeGirolamo, left, is congratulated by teammate Mark DeGirolamo, right, after scoring a touchdown against Foxboro High during the first quarter Thursday in Mansfield.

Mansfield High’s Rocco Scarpelini runs along the end zone in front of cheering fans after rushing for a touchdown against Foxboro High during the third quarter Thursday in Mansfield.

Mansfield High's Trevor Foley makes a reception against Foxboro High during the fourth quarter in Mansfield.

Mansfield High's Ryan DeGirolamo, left, is congratulated by teammate Mark DeGirolamo, right, after scoring a touchdown against Foxboro High during the first quarter Thursday in Mansfield.

MANSFIELD — Mansfield High football coach Mike Redding would like to think that Thursday morning’s performance at Alumni Field was just a preview of coming attractions for next season.

“Defense, you know, ‘Bend but don’t break,’ ” Redding said following his team’s 35-21 Thanksgiving Day win over Foxboro High. “Their running back (senior Dylan Gordon) is terrific, they’ve got good receivers, and we did a good job of bottling them up.

“Offensively, I thought we played the way we thought we could. We kind of hit on all cylinders, and the good news is all our skill players are back next year. We’ve got some great senior linemen to replace, but we’ve got a good foundation for the next couple of years. Hopefully, we can build off this one.”

The victim was a Foxboro team that just last Saturday night had played Duxbury for a berth in the state Division 4 Super Bowl. Warriors coach Jack Martinelli steadfastly refused to use the quick turnaround his team faced after its disappointing 38-21 loss to the Green Dragons as an excuse, however.

“I’m not going to use that as an excuse,” said Martinelli. “We were in the game enough on the scoreboard in the first half to stay in it right to the end of the game. The separation in the third quarter made the difference.”

Buoyed by a fourth-and-two stop near midfield when a host of tacklers led by senior defensive back Jared Fraone swarmed Gordon for a 1-yard loss, the Hornets turned a 14-14 halftime tie into a 28-14 advantage they took into the fourth quarter.

“We played great defense,” Redding said. “That’s a very explosive offense that’s been averaging in the high 30s (the Warriors entered the game averaging 38.7 PPG). Forcing them to two field goals earlier in the first half was big to keep it a tie game (at the end of the second quarter), then that big fourth-down stop in the third quarter, I thought, was the turning point , the big play to get us the 14-point lead. After that, it was hold on for dear life, don’t give up big plays, and hope you can cover onside kicks.”

Junior quarterback Connor Zukowski led the way for the Hornets (7-4) offensively, completing 12-of-15 passes for 183 yards and two touchdowns (both to junior running back Ryan DeGirolamo) and sneaking in from the 1 for another score. He had a strong supporting cast that included classmate Rocco Scarpellini, (17 carries for 128 yards and a touchdown; two receptions for 14 yards), sophomore wide receiver Trevor Foley (four receptions for 76 yards), DeGirolamo (four catches for 42 yards and the two TDs) and sophomore wideout CJ Bell (two catches for 51 yards).

“I thought this was about as well as we’ve played offensively,” said Redding. “We executed. We ran the ball. We threw well. ‘Zuk’ did a great job throwing. Trevor and CJ made great catches. And Rocco, we missed him the last couple of weeks. He was playing hurt today, in pain, and gave us over 100 yards.”

Taking their first possession 73 yards in nine plays (Zukowski was 3-for-3 for 52 yards on the drive), the Warriors seized the lead when DeGirolamo took a screen pass 16 yards for a score. Senior James Gilleran’s first of five conversions made it 7-0 just past the midpoint of the first quarter.

A couple of field goals (30 and 43 yards) by strong-legged junior Sam Carpenter pulled the Warriors within a point in the second quarter before Mansfield junior Drew Sacco ran in from the 5 to cap off an 8-play, 80-yard drive that featured a 41-yard jaunt by Scarpellini.

Foxboro (9-3) managed to pull even at the half, though, as Gordon (21 carries for 125 yards) turned the left corner to score from 15 yards out (the drive covered 64 yards in eight plays) and tacked on the 2-point conversion on another run.

The third quarter was all Mansfield, however, as a spectacular, one-handed grab by Foley gained 18 yards to the 3, spotting the ball for Scarpellini to put the finishing touches on an 11-play, 80-yard drive that opened the second half.

The Hornets’ offense capitalized on the defense’s big fourth-down stop by going 46 yards in five plays, 38 of the yards coming on a dep ball to Bell before Zukowski scored on a keeper from the 1 to make it 28-14 with 3:30 to go in the third.

Mansfield widened its lead to 35-14 on an 8-yard TD pass from Zukowski to DeGirolamo (the 8-play, 62-yard drive featured a 30-yard run by sophomore Connor Curtis, who executed a tremendous play fake) with 7:20 left in the game before Foxboro answered on its first play following the ensuing kickoff, senior wide receiver Rashaad Way (five receptions for 140 yards) hauling in a pass from classmate Thomas Marcucella and bursting for a 73-yard quick-strike score that made the final 35-21.