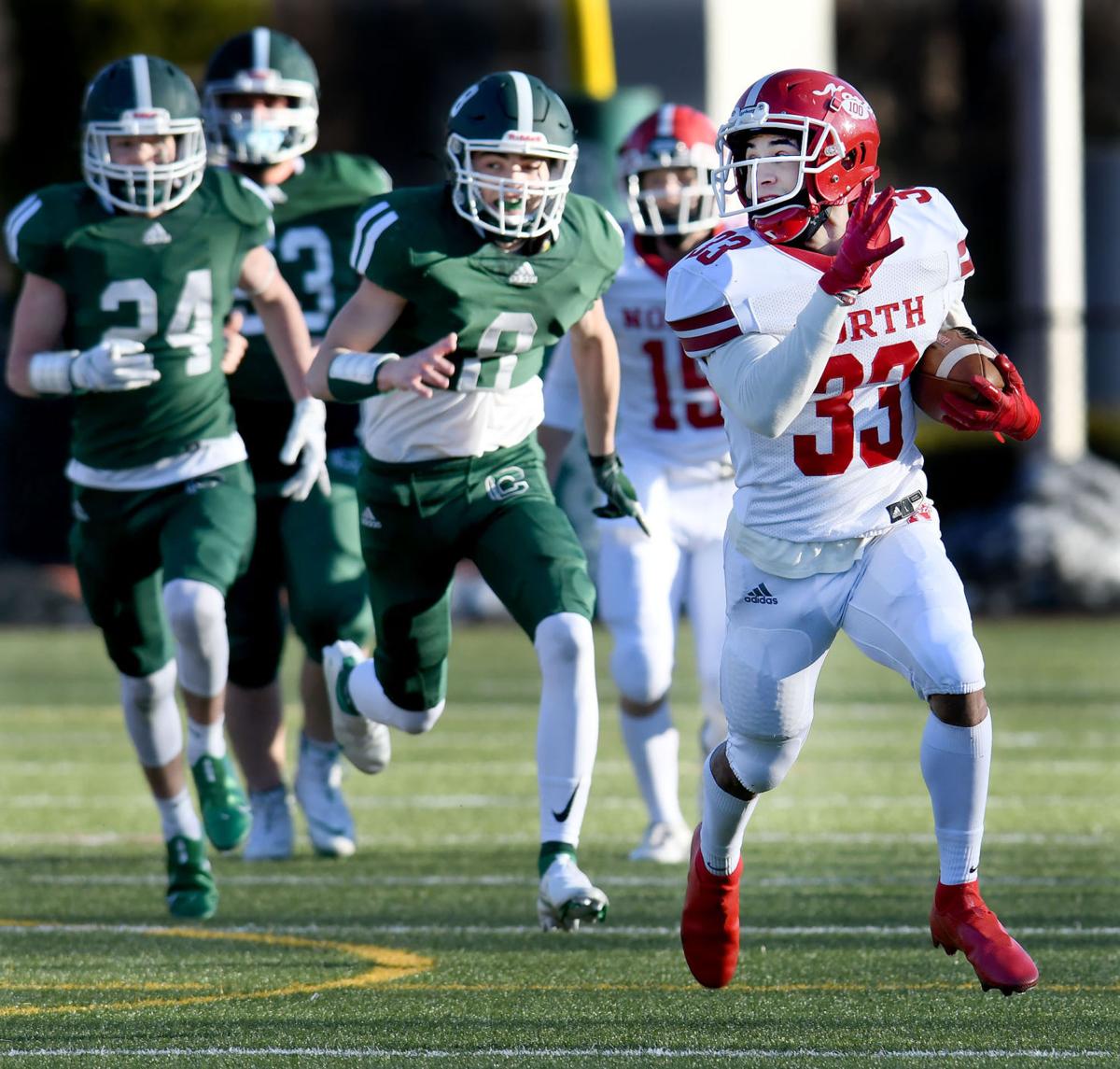 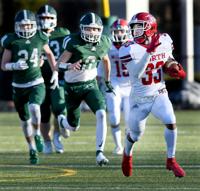 North Attleboro High’s Jacob Silva breaks free from the Canton High defense on his way to the end zone, but was tackled just shy of the goal line during Saturday’s game in Canton. 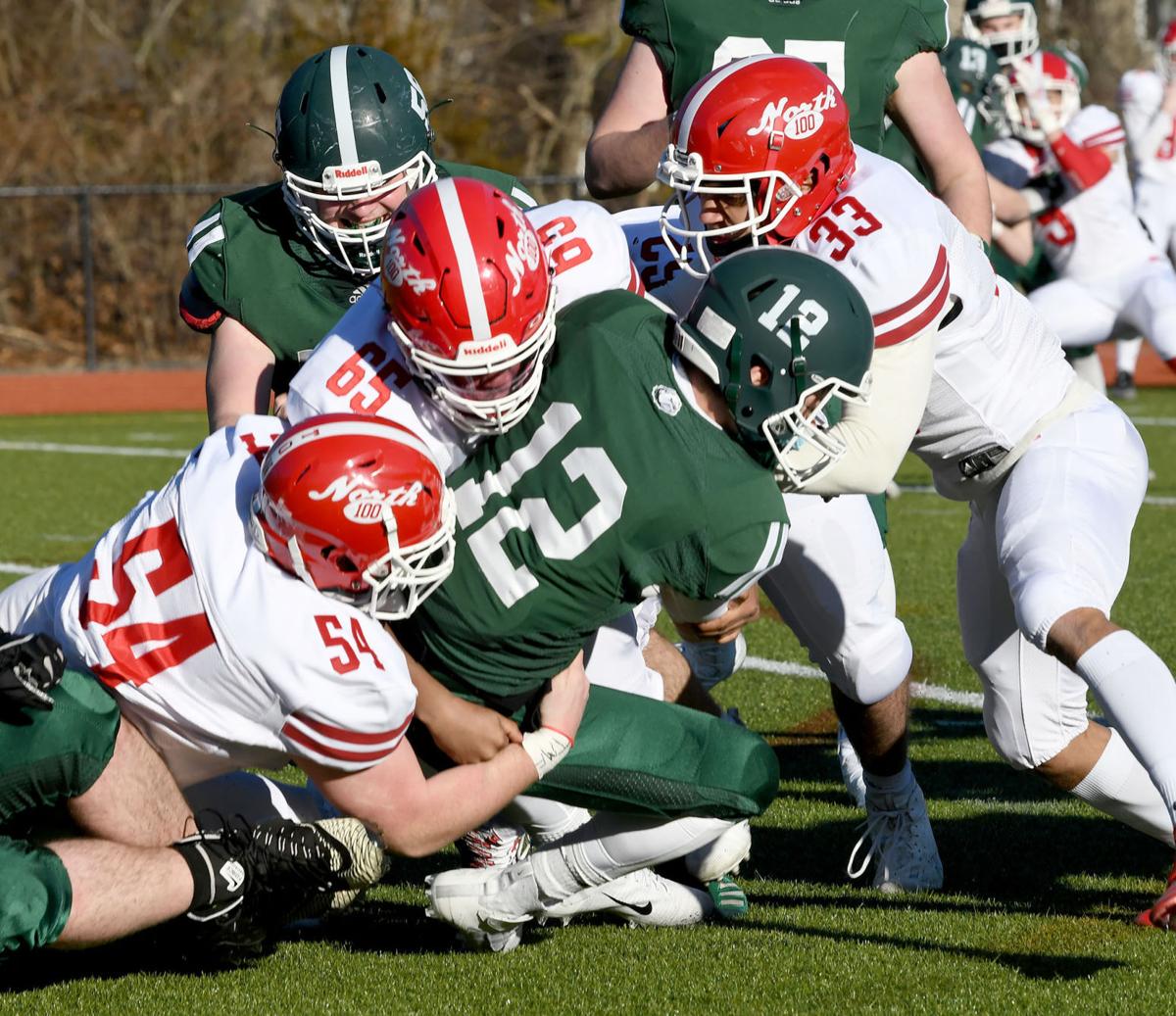 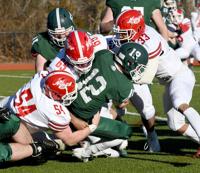 North Attleboro High’s Jacob Silva breaks free from the Canton High defense on his way to the end zone, but was tackled just shy of the goal line during Saturday’s game in Canton.

CANTON -- The Rocketeers of North Attleboro High served notice that they just may very well be the most explosive football team in the Davenport Division of the Hockomock League on offense.

Junior quarterback Tyler DeMattio accounted for 211 yards of offense and 22 points as the Big Red scored points in every quarter in taking home a 41-13 victory from Canton High in its season debut.

The Rocketeers had production aplenty from the Penta brothers and Jake Silva too, while the Big Red defense did not allow Canton a first-half first down in gaining a 21-0 lead by intermission.

“It was a step in the right direction, but we still have a lot of work to do,” North coach Don Johnson said.

DeMattio scored on runs of 45, 10 and eight yards in the first half, in addition to kicking all three point-after attempts. DeMattio amassed 73 yards rushing on nine carries, while throwing for 138 yards with an 8-for-12 accuracy rate.

But DeMattio had plenty of assistance in North scoring six TDs.

Senior Jared Penta rushed for 65 yards on three carries, and enior Matt Penta hauled in three passes for 73 yards, including a 21-yard scoring strike from DeMattio four minutes into the second half.

Senior Jake Silva accounted for his first career 100-yard rushing game with 104 yards on six carries, including a 15-yard six-point romp with just over a minute left in the third quarter to create a 35-7 lead.

And for an exclamation mark, junior Dan Curran provided more Big Red fireworks with a 90-yard kickoff return for a TD with just over two minutes left in the game -- immediately after the Bulldogs had scored their second TD.

North gained the lead just 53 seconds and three plays into the season on DeMattio’s 45-yard burst. But the Rocketeers then went three series without taking points, twice having fourth-down plays snafued.

However, North then executed four consecutive scoring drives over the second and third quarters, starting with DeMattio’s 10-yard TD run to finish off a 70-yard drive. A Jared Vacher QB sack set up North’s third scoring drive, and DeMattio’s third six-point rush of the first half.

“When you haven’t played a game in over a year and haven’t had a second scrimmage, some of that stuff (miscues) is going to happen” Johnson said. “I think we can become a pretty good football team.”

North returns to action and on the road for a second straight weekend, meeting Sharon High Friday, with the Hockomock League game to be staged at Mansfield High with a 5 p.m. kickoff.

MILFORD -- Opportunity was knocking at the door for the Attleboro High School football team when Andrew Bakowski recovered the season-opening kickoff for the Bombardiers.

But instead of taking the lead, the Bombardiers’ drive stalled at the Milford 32-yard line.

The Bombardiers had another chance to take the lead in the Hockomock League clash after a wind-aided punt presented AHS with the ball at the Milford 23-yard line on their second series, but a fourth-down-and-3 bid was stopped.

The opportunities continued, as Michael Strachan (at the Milford 36) and Ryan Betts (at the Milford 26) both recovered fumbles for AHS, but the Bombardiers were unable to put points on the scoreboard during the first half and eventually succumbed to the arm of Scarlet Hawk QB and former Bishop Feehan High Shamrock Brady Olson.

Olson completed 18 passes for 296 yards and four TDs as Milford established itself as a force in the Kelley-Rex Division of the Hockomock League.

“That was our chance, not being able to capitalize on the turnovers,” AHS coach Mike Strachan said of the inability to convert three takeaways into points. “And Brady (Olson), no doubt, is a college (UMass-Amherst) player.”

The Bombardiers lost running back-linebacker Kaiden Murray to injury in the second quarter, and also lost out on a controversial Milford go-ahead TD in the second quarter on an Olson pass to Carter Scudo, despite the Scarlet Hawk seemingly losing possession of the ball before crossing the goal line on a dive for six points.

“They have seniors all over the place, they were physical up front and controlled the line of scrimmage,” Strachan added.

The Scarlet Hawks converted an AHS fumble and a fourth-and-8 pass to take a 14-0 lead just before halftime. Then twice during the second half, Olson and Keithley Sutton (13 and 62 yards) combined for Milford scoring strikes.

“We were hoping that the offense would do a little more,” Strachan said. “Defensively (Strachan 16½ tackles at linebacker), we played well,” the elder Strachan said. “Milford is the real deal, that’s a good football team.”