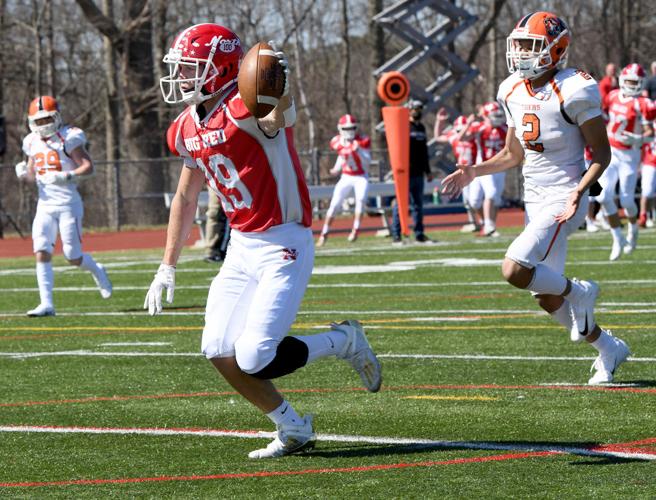 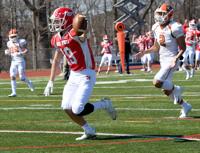 North Attleboro High’s Matt Penta (19) marches into the end zone for a second-quarter touchdown during the teams’ match up in North Attleboro on March 28. 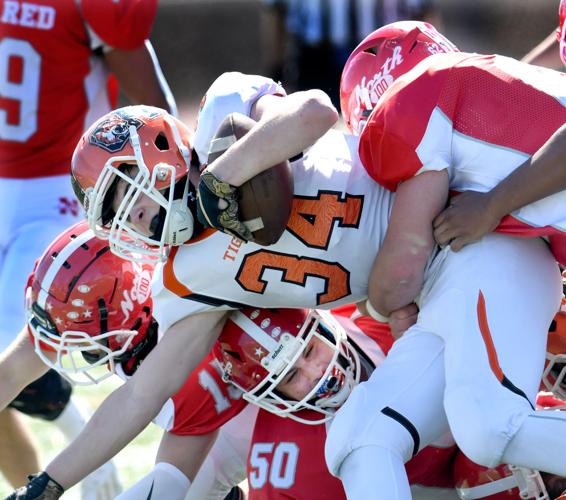 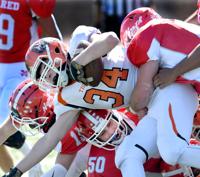 Oliver Ames High’s Chad Silva (34) is brought down by the North Attleboro High defense, including Justin Vecchiarelli (50), at the bottom of the pile, during the teams’ matchup in North Attleboro Saturday.

North Attleboro High’s Matt Penta (19) marches into the end zone for a second-quarter touchdown during the teams’ match up in North Attleboro on March 28.

Oliver Ames High’s Chad Silva (34) is brought down by the North Attleboro High defense, including Justin Vecchiarelli (50), at the bottom of the pile, during the teams’ matchup in North Attleboro Saturday.

NORTH ATTLEBORO — Tony Calcia was smiling looking down upon the proceedings at Raymond Beaupre Field, as the North Attleboro High football team hit the 40-point threshold for the third consecutive game in a 41-12 conquest of Oliver Ames in a Hockomock League game.

In the 100th anniversary of season-opening games for the Rocketeers, and on nearly the one-year anniversary of the passing of the beloved North Attleboro ambassador of good will and man of many hats that Calcia wore, the Big stormed out to a 21-0 halftime lead.

Junior QB Tyler DeMattio completed seven passes for 209 yards, including four TD strikes — a pair to senior Matt Penta, covering 38 and 10 yards, and six-point aerials to Colby Feid (34 yards) and Jared Penta (65 yards on the first play of the second half).

And just as impressive was the Big Red defense, which limited the Tigers to gains of two yards or less on 10 of their 17 first-half rushes, while OA never advanced beyond the North 49-yard line.

Add in back-to-back fumble recoveries by Dan Curran and Julian House in the fourth quarter to stifle OA drives, and a six-yard QB sack created by senior Harry Bullock on OA’s first drive of the second quarter, and the Big Red packaged another impressive showing for their third victory of the season.

“We’re coming together, the schedule has worked in our favor,” North coach Don Johnson said of the Rocketeers’ early-season control of their own destiny. However, the Davenport Division title in the Hockomock League will be at stake for North with a 1 p.m. kickoff at Beaupre Field against Stoughton Saturday.

“They are by far the most physical team out there,” Johnson said of the Black Knights. “All three of their backs are 200-pound guys, and not only do they run hard, but they block well.”

It was the Big Red defense which made a statement to produce North’s second TD of the game, and proved to be the springboard for control of the outcome. On consecutive Tiger rushing plays, Justin Vecchiarelli and Tyler Bannon dropped OA runners for losses of one and four yards, respectively, while on third down Bullock bulldozed through the Tiger line for a QB sack.

One play later, North was in the end zone for a second time, with DeMattio spotting a wide-open Matt Penta over the middle for a 38-yard TD toss.

North scored a third first-half TD with 33 seconds left, as DeMattio directed a 38-yard, three-play set, finishing it off with a 35-yard TD strike to Feid over the middle.

And for good measure, Curran’s fumble recovery at the North 47-yard line set up yet a sixth TD — an 18-yard run by sophomore QB Kyle Conroy, after Curran had bolted 20 yards.

“We didn’t want to run it up; we were trying to get kids in the game,” Johnson said of the second-half sequences and North scoring three TDs.”The defense has played consistently well and is getting better every week — this (Stoughton) will be the real test.”